A Hypothetical Model of My Motivational Circuitry 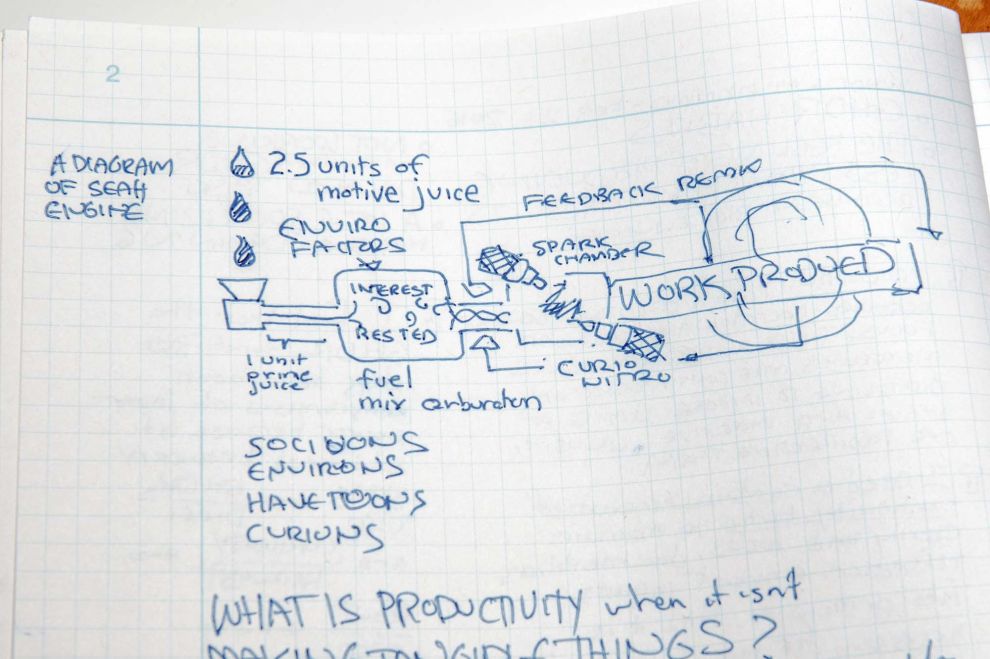 Today I doodled a model of how my “motivational circuitry” works. It’s a bit silly, but I think it might be an accurate model of how my brain works. The basic idea is that I have a certain amount of “energy” that can be used to self-motivate myself on tasks when I’m working solo. This energy is used every time I have to direct myself to do a task. It might fit the experiences of people who have “ADHD Inattentive Type” patterns, if they happen to like pretending they are robots with motivational circuitry!

How much fuel do I start with at the start of the day? Under normal circumstances, I have a DAILY RESERVE of about 2.5 units of “self-motivation energy”, which is used up as I tackle complicated tasks during the day. The energy reserve replenishes itself overnight if I get a full eight hours of sleep. Unused energy does not carry-over to the next day.

When I (hereafter called a ‘Dave Unit’) start a “major task”, it always costs about one unit of energy; this is called the startup cost. It is deducted from the daily reserve. This energy is used to power my ability to discipline the Dave Unit and maintain target lock on the designated task.

To start a task, the energy reserve must have AT LEAST as much startup cost as needed for that type of task. For example, if a Dave Unit has 0.5 units of energy left at the end of the day, it can not start a new task under normal situations without overdriving the system into unproductive oscillation (see EMERGENCY BOOST later in this manual).

Each unit of energy provides around 60 minutes of running time (1 hour per energy unit). After this energy is consumed, another unit must be consumed. This limits the amount of time that a Dave Unit can be forced to do something to about 2.5 hours a day. However, there are ways to extend this productive time!

With the nominal 2.5 units of energy available each day, 2.5 hours of “focused work” is possible before the system overheats and enters a FREE-ROAM INTERNET or NETFLIX BINGE oscillation state. At this point, the system must reset overnight (8 hour sleep) to restore the Dave Unit’s full energy reserve. However, there are ways to ‘game’ the total runtime by harnessing quirks of the Dave Unit System Architecture (DUSA).

The startup cost is ALWAYS used-up when starting any task. However, it is possible to receive an energy rebate under certain conditions:

A Dave Unit works most efficiently when paired with a freedom- and curiosity-driven model of action. For tasks that do not naturally conform to this model (so-called yucky tasks), the startup energy cost increases as follows:

Penalties are cumulative! In the worst case, a yucky HAVE-TO-DO task with additional STUPID/TEDIOUS properties will have a total startup cost that exceeds the maximum DAILY RESERVE of energy and therefore are impossible to start under normal operation. This can be overcome through the application of EMERGENCY BOOST or HYPERFOCUS PRIMING (see following sections).

Additionally, the runtime efficiency for a penalized task is generally less stable:

In some cases, a yucky task may reduce or refund a portion of its startup cost, which can help extend the total runtime for the day. This is not predictable ahead of time.

In extraordinary circumstances it is possible to exceed the 2.5 unit daily reserve, though this will overload the system and cause extended downtime:

A quirk of the Dave Unit System Architecture allows yucky tasks to execute AFTER a closely-related non-yucky task is run. It is a form of “jump-starting” the penalty-inducing task by “blipping” the HYPERFOCUS DRIVE using a maneuver called HYPERFOCUS PRIMING.

For example, a clever DUSA operator might achieve target delivery by first engaging a HYPERFOCUS PRIMER TASK like (a) delivering something RELATED to what was requested, but is appreciably less stupid/boring or (b) is tangentially related to the onerous task and satisfies an inner curiosity. These primer tasks incur the normal startup cost.

When the PRIMER task is completed, internal resistance MAY be reduced to the point that the actual yucky task can then be started with no penalty, if HYPERFOCUS DRIVE MODE energy is now available in the system. However, the yucky task still incurs the minimum 1.0 unit startup cost unless it has transmuted into a HYPERFOCUS JUMP POINT due to a change of heart or perspective.

When a Dave Unit is not MINDFULLY DIRECTED through the active use of auxiliary index cards, journaling, or other focus enhancers, it may randomly deprogram from the current task target and retrieve an UNEXPECTED BENEFIT from a DISTRACTING RABBIT HOLE. In this case, no startup cost is incurred, but the DAILY RESERVE is depleted by (NUMBER OF HOURS IN RABBIT HOLE / 2) energy units.

While this is an efficient mode of operation as far as runtime is concerned (twice as efficient as for directed tasks), the energy spent reduces what is available for directed tasks. The unexpected benefit extracted is in many cases useful at some point in the future. It just isn’t useful RIGHT NOW.

That said, a healthy Dave Unit requires a great deal of wandering time to stay in peak operating condition. While the ratio of focused/unfocused time varies depending on ambient outside temperature, it is not uncommon to see a 50/50 split between Unplanned versus Directed activity when running the unit in autonomous (solo) mode.

The above rules apply to a Dave Unit operating in autonomous (solo) mode. In the different situation working in a FACE-TO-FACE GROUP CONTEXT, a Dave unit enjoys an DAILY ENERGY RESERVE BONUS of 0.5 units. Furthermore, if a Dave unit can operate PAIRED with another unit in CO-CREATION MODE, startup and penalty costs are reduced by 25%.