Shaun Inman is one of those magical indie unicorns that can do visual design, code, compose music, and run a software business. What strikes me in particular about his work is that it seems steeped in an aesthetic anchored by details that appear to delight him, and I really admire him for sticking to his guns. For the past few years he’s been working as an independent game developer, which is a subject of interest that I’m starting to dabble in. As I was scrabbling around the Internet avoiding work, I was delighted to discover Shaun’s Lift Off: The Last Rocket Development Diary, which is the process documentation side of his The Last Rocket IOS game project from several years ago. 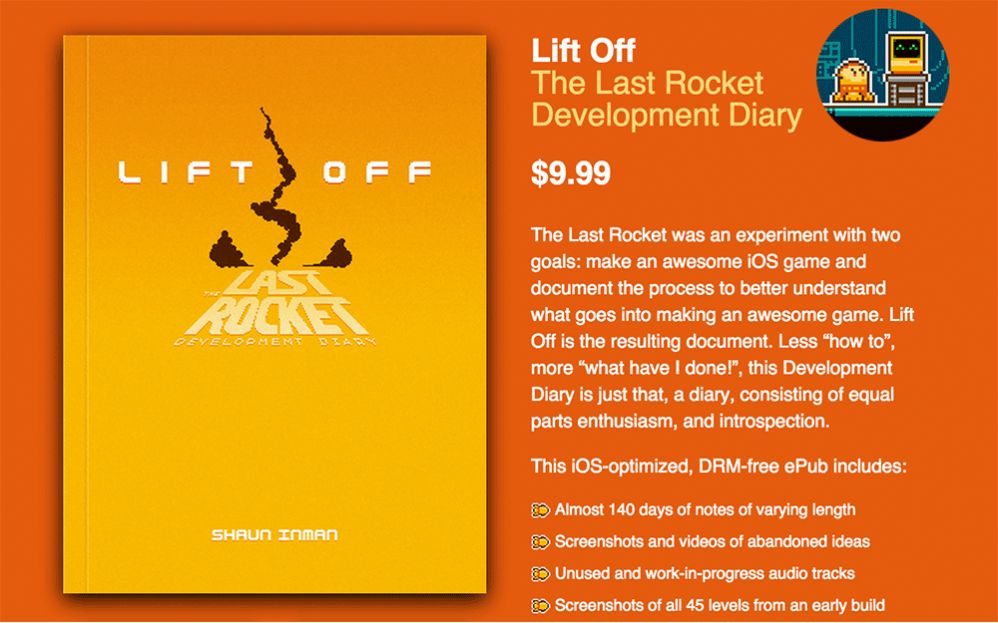 Unlike a lot of game development books, the development diary is more of a personal record of what Shaun did in his 140 days. A lot of books will just give you the bullet points of the development cycle rather than detail the actual feeling of going through the experience. While the diary is tersely written, it doesn’t lack at all in character due to its liberal intersprinkling of tweets and personal observations.

It’s a pleasant book to skim, and I am finding it very comforting to follow someone else’s creative journey in such detail. He includes screenshots of pixel art in development, audio of the musical themes he composed, and observations on the game development process in context of his personal goals. You can get a sense of his mood every day through the tweets that align with each day’s work. Initial drafts of work are liberally shared. It’s all pretty great if you love looking at working process as I do. 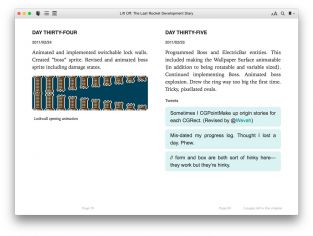 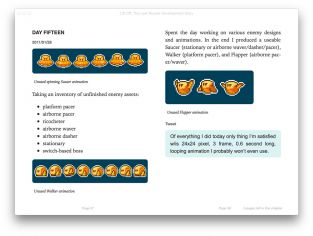 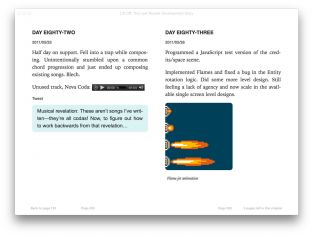 The book itself is an eBook, which I read through the Mac OS iBooks app. I’d personally love to have a physical version of the book, but I don’t believe one is available. Each dated entry is from a page to several pages long, depending on the number of pictures available. I took a few screen captures above, though the official purchase site has prettier ones to look through.

One huge takeaway I got from this purchase: I miss simple journaling. Over time, my own website has gone from being the freeing personal journal that it once was to a content management system. It’s just not very fun to open up WordPress when there’s so much maintenance junk to deal with. I’m going to try to make a new, simpler blog and try to get back to the kind of daily writing just for myself. The main website is no longer just for me, and I think that is what has been feeling so awkward about it for so long.

Anyway, if you like process and seeing how one experienced independent game developer goes about his process, pick up Lift Off at his online store. Be warned that this is not going to teach you how to do anything, but it’s great for understanding what goes into making a game at a high level.