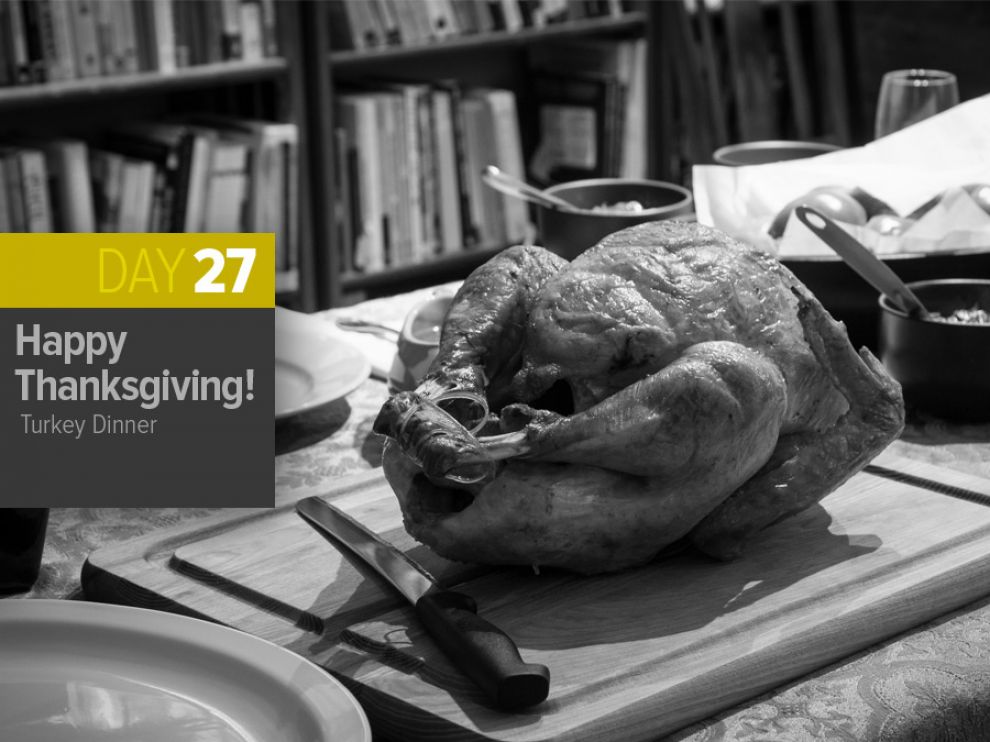 Today’s thing-a-day is Thanksgiving Dinner, which happened despite the power going out last night and threatening everything. Happy Thanksgiving, everyone! :-)

This year’s Thanksgiving with my sister’s family was different because of the snowstorm knocking out power at 9PM Wednesday night. My sister arrived around 11PM, and the power was still out. We ate some still-warm pork shank and rice for dinner, and turned in. The power came back at 1130AM, thankfully, but because we were getting a late start I decided not to stuff the turkey this year.

This year’s turkey was a brined never-frozen 12-pound bird from Trader Joes. Unfortunately, I seem to have lost my thermometer probe and I had to wing it on the cooking time. I started the bird upside down at 425 degrees for 30 minutes to surface-dry and brown the bottom, them flipped it and did 325 for another 45 minutes, then checked the temp, and let the bird ride ride at 250 degrees for another couple of hours. The goal was not to let any part of the bird rise above 175 degrees, particularly the breast, but still get a good roasted color. You need an air temperature above 325 degrees to get browning action, and after that you can cook the bird fairly low and slow. I still ended up overcooking the bird a bit because I didn’t have the continuous monitoring help of the temperature probe to warn me. Oh well. I was thankful to be able to cook at all! There are still people without power in New Hampshire.

I was also thankful that the temperatures were low enough that we could store food outside until the power came back. It was just around 33-35 degrees out all day, and this happens to be a great temperature to store Coca Cola at for that super-icy cold splash of refreshment. I really need to get a separate beverage refrigerator to store soft drinks at this temperature.

So that is today’s THING-A-DAY! It’s sort of an easy two-for-one, but I am exhausted and it is at least something I made! My house, my rules! :-) I am thankful to have a website and know that people visit. Happy Thanksgiving!