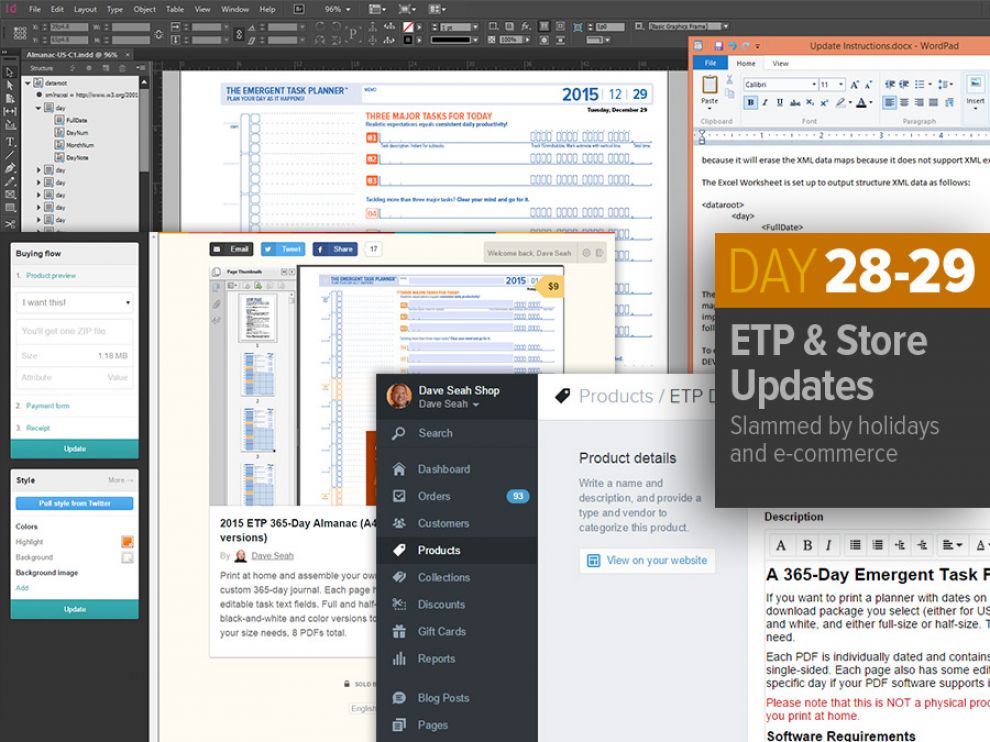 With the holiday weekend family festivities, I’ve been forced to merge all the work for the past two days into one. First was the big ETP Almanac Update for 2015, followed by updating two online stores with collateral. It’s a big chunk of work, but thanks to some prep I did last year it wasn’t as time consuming as it could have been.

The ETP Almanac is an 16-PDF package for both US, US-Mini, A4, and A5 paper sizes. It comes in black&white and color, with a total page count of 2,928. Each journal page is customized with the year, the date, and the day of the week. Not only that, but each journal page has interactive form fields for the tasks lines and the memo area. It’s taken me a while to get the whole process down into something I can do in a couple hours, but there are a lot of magical steps that I tend to forget. Last year I wrote some notes, which helped me remember how to do it. They weren’t GREAT notes, but they allowed me to write BETTER notes so next year will be a little easier! The process looks something like this:

Et voila, it is done. The trickiest part is the XML import, but the hard work of tagging and creating the template structure was done two years ago.

There are two places where I sell the ETP Almanac digital download, Gumroad and my Shopify shop. Each of these need updated graphics, zip packages, and listings. I never quite remember how these work either, and every year I learn something new about how I should be doing it.

I like this service for its easy-peasy service options. In the past, I’d just been updating the old link with new files, but I just realized that this actually means everyone gets to download the newest versions for free every year, even if they bought two years ago. The way to do it, apparently, is to create a NEW product listing. So I did that, and made a custom URL (a new feature) that points to it.

I also had to update the graphics. One pesky thing to update is the year portrayed on the graphic. Rather than re-import the PDF and resize (tedious), I created a master template that has the year and other date text more easily editable in Photoshop. People use the graphic to confirm they’re getting the right year. Next year, updating these graphics will be much faster.

Lastly, I always send the 2015 update to people who bought the 2014 version after July 1st. There used to be a way of selecting who would get the update, but the option appears to be gone. So I downloaded the customer list in CSV format, sorted the ranges, and pasted the email addresses into the BCC field of a notification email. Rather than attach a 1.5MB file, I poked around Gumroad and discovered its “Customer Offer” option, which allows you to set up a special URL for a certain amount-off. I set the amount-off to US$9, which effectively made the download free, and included the special URL. DONE! For good measure, I saved all the catalog text I’d written to a file so I could reuse it next year.

Next, it was time to update the Shopify shop, which I haven’t looked at in a long time. Similarly. I created a NEW listing by duplicating the old one, created a master Photoshop template that had editable years/dates as I had with the Gumroad version, and updated the graphics. It took me a moment to realize that I had to use some digital download add-on to upload the new files, then hid the old listings. Done!

Since I was in Shopify, I also cleaned-out some old files and updated the information there. The whole Shopify store is in flux right now as I figure out shipping again. For 2015 I’m moving away from Shipwire, the alternative warehousing solution I’ve been comparing with Amazon FBA, to give fulfillment from home another try.

Lastly, I have to make the sample downloads, which is the first 21 days of January 2015. I use the US version, providing two sample files of Full-size Color and Half-size B&W.

I figure this a good way for people to get a sense of what the ETP Almanac is and whether it’s worth 9 dollars. I’d love to be able to sell an actual bound ETP almanac, but it would be prohibitively expensive for me to produce without a guaranteed number of orders. Perhaps someday I will kickstart one, but that’s a lot of work too that I don’t have time to take on. Perhaps by the end of 2015 I’ll have some time to look at it when I am between projects.

Finally, I have to write this blog post. With all the screen capture, uploading, and writing, it’s easily 90 more minutes, which is why I’m posting this at 4AM.

Here’s some links if you want to check out the pages:

Though the updates went faster, it still took a good 10 hours to get it all done while my sister’s family was occupied with other activities. Tomorrow is the LAST DAY of the THING-A-DAY challenge, which will likely be the other tedious update, the 2015 Word Counting Calendar. This one is NOT automated, so I will have to hand-update all the files. Not really looking forward to it, but it has to be done!