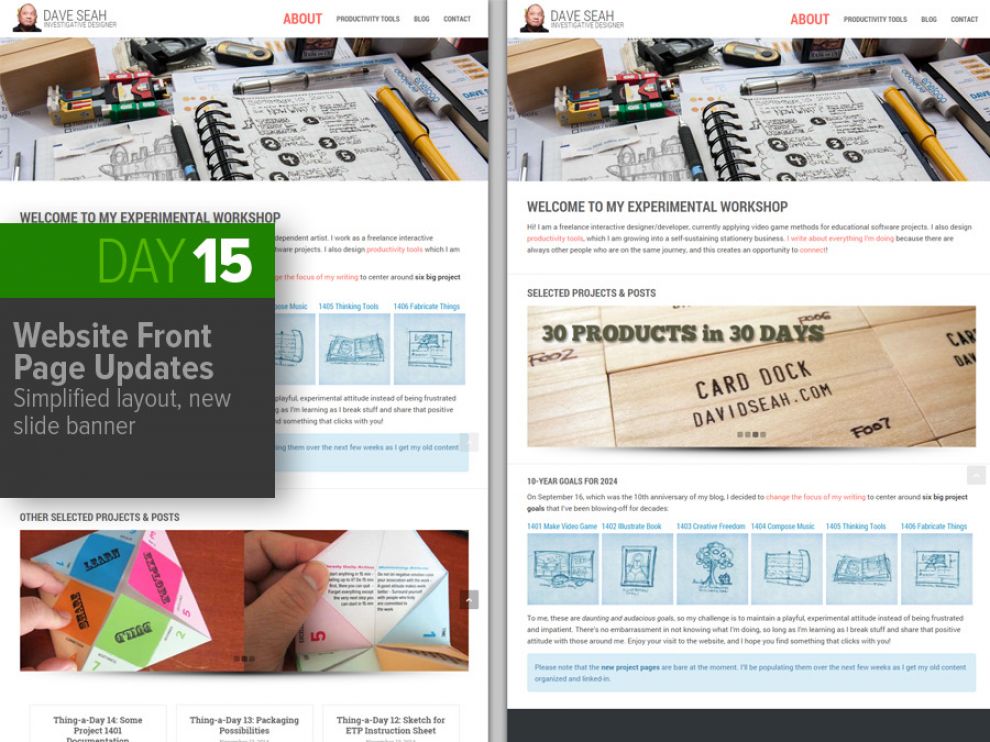 Saturday, where did you go? I was tired all day, and instead of forcing myself to do something, I decided to just indulge my napping until I woke up. Apparently I am capable of a LOT of napping, to the point of feeling sick.

Around midnight I had had enough and went to make something to eat as I thought about what Thing-a-Day to make. It hit me that today was DAY 15, and I had a lot of things; why not make a new slide for the site home page? EASY, RIGHT?! A couple hours later…

Earlier today I saw a tweet from Amy Segreti regarding flow:

@daveseah Love your Day 12 honesty (http://davidseah.com/2014/11/thing-a-day-12-sketch-for-etp-instruction-sheet/ …), lowering the bar to allow for busyness. I’d call that following your flow. ;)

To which I replied:

@AmySegreti I love the idea that “lowering the bar” leads to flow! I didn’t make the connection between flow and least resistance before!

Least resistance to flow…this was a new idea to me. It’s also the reason why I decided to nap instead of work…maybe this was the path of least resistance, and I needed it! I’m not sure how that worked out, but making a simple slide for the front page seemed along the same lines of “least resistance”. It’s something that I needed, and it didn’t seem that hard!

Not the world’s most inspired layout, but it works! Drop shadows and easy color combinations…boom! Now just to drop it into the…oh wait a minute. The home page didn’t look right to me anymore for the following reasons:

So, I reorganized it and chopped out some content. New writing about what I’m doing at the top. It used to say this:

Hi! I write about design and creativity in the context of my desire to live as an independent artist. I work as a freelance interactive designer/developer, currently applying video game methods for educational software projects. I also design productivity tools which I am growing into a self-sustaining stationery business.

BLAH BLAH BLAH. At the time I wrote that, though, I was uncertain about shifting into a new direction, and I think I had to pile-on the words to give myself some confidence in the structure of what I was doing. These days, I’m much more settled on the idea of what I’m doing, and so the new copy reads as follows:

Hi! I’m an interactive designer/developer, applying video game methods to education. I also design productivity tools, which I am growing into a stationery business. I write about everything I’m doing in case there are people on similar journeys. Perhaps we can share notes and connect!

It’s not shorter, but it is a bit more direct.

Right after that, I’ve put just a slideshow of recent stuff (this is where the new slide went), and eliminated the “recent posts” carousel. It was there just to fill space. Then after that is where I put all the 10 year goals. This is a better place I think because it was rather hard to dig into at the very top of the page; if you’re a visitor hitting the site for the first time, you don’t want to read a bunch of little boxes. You want to know why you are here, and maybe see a picture, and maybe click on something.

Here’s the before and after (before on left). The current text on the website is a bit different from what I have in the screen capture, I know… 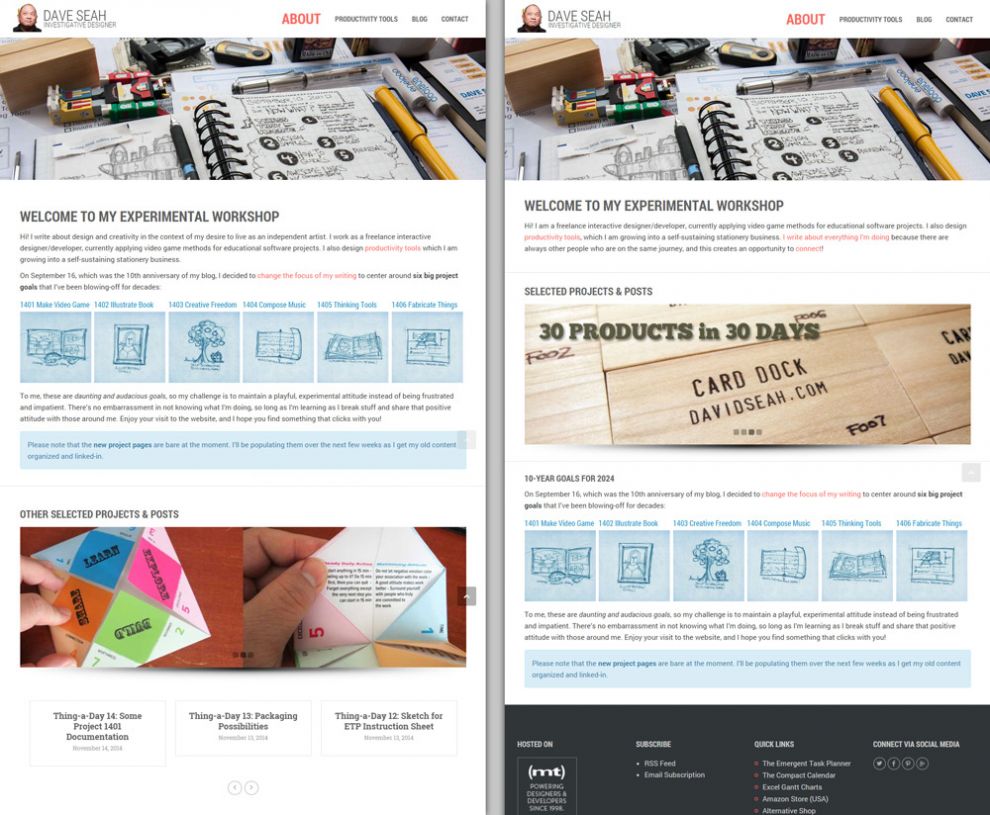 Overall, it’s more compact, and a bit more straightforward I think. Good things, which is why it’s today’s THING-A-DAY.