The trick, of course, moving out of the dream domain and into the world of production. And this is where Trello, with its suitability to kanban-style planning, is coming into play.

For reference, here’s what my “DaveCo Personal” board looks like right now, with annotations to show the function of each column. 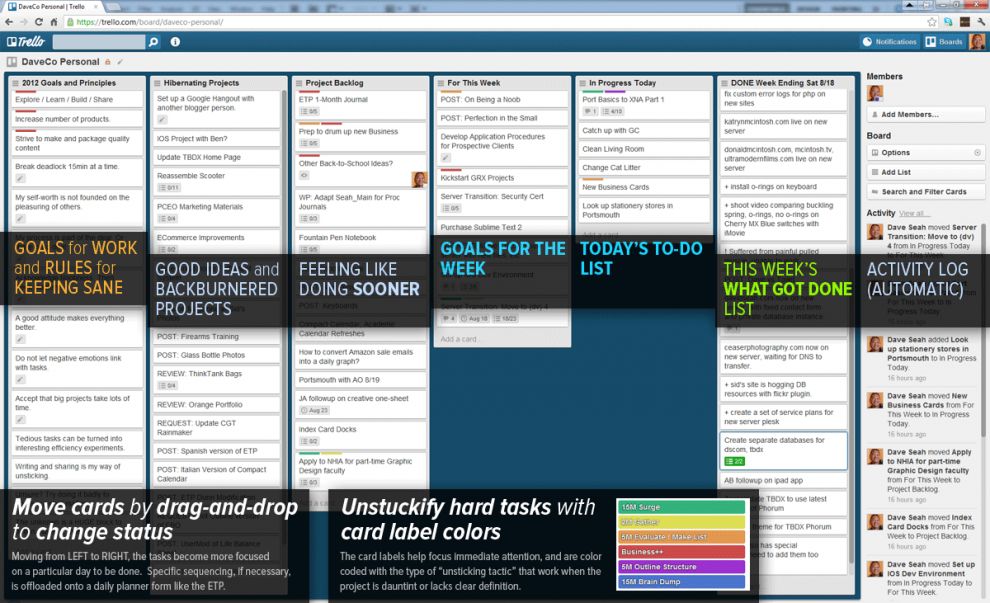 Most of my Trello board is about wishes, projects, and tasks, but the left-most column has a different purpose. It contains an evolving list of principles and goals used to determine the relevance of every project. This is similar to the When is Something Worth Doing? concept from the Concrete Goals Tracker. It’s kind of like a mentor in a column, providing some perspective to the list making so it doesn’t go completely crazy with ideas that don’t add value or moves me out of alignment with respect to what is important and what is merely interesting.

Each column becomes more concrete from left (possibilities) to right (scheduled, with additional details as needed). As I move the cards, I rewrite their title and descriptions accordingly, and add checklist and due date if they are needed.

Nurturing an Orchard of Possibility

If I have a great idea in the shower and think it’s worth doing someday, I will run down to the computer and create a card in Trello in the Hibernating Projects column as I shiver in my bathrobe. Most of these pile-up in the HIBERNATING PROJECTS column, unless there is an advantage to doing it sooner. Perhaps the idea leverages off something I’m doing already this week, and it’s easy to try out because I’m set up for it.

In most cases, though, I’ll see the card later and may spend some time thinking it through. Maybe it’s actually something I DON’T want that badly, and I’ll delete it. Otherwise, I like to let the idea sit and ripen. I might do some Googling to see if it’s already been done, and find that it has been done already and done well. At that point, I’ll move the card to the DONE THIS WEEK card and close it out by renaming it “Research Great Idea; Already exists.”

If, on the other hand, I find that the field is wide open, I might move the card to the PROJECT BACKLOG as something to definitely look later. At such time, I might open the card and create a checklist of things to try out or do, putting a little more structured thinking into the idea. This lowers the threshold of action for when I come back to it again after a long absence, quickly bringing myself up to speed on procedures I may have forgotten.

Over time, as I review and reconsider every card in the pile, understanding and detail grow. At some point, enough detail and urgency will conspire to move the card out of the nursery and into production. I should add that the magical growth formula here is my attention; just looking at these cards, in the context of my daily continuity, helps each one grow just a little bit. What was not possible two weeks ago may seem utterly feasible today, or perhaps I saw a movie that gave me the inkling of an idea that BAM triggers some new possibility. It really can be that easy.

When I’m ready to do some work on an idea, I’ll move it out of PROJECT BACKLOG and into FOR THIS WEEK.

Some of these projects are pretty big and hairy. For example, it took me a while to get moving on the interactive project because I didn’t yet know the best approach. I didn’t even realize this was slowing me down, until I noticed it had been sitting on the list for quite a while. Moving the idea from idyllic “new puppy” phase to the reality of “scooping poop three times a day” is hard work. Plus, when you’re not sure what the project entails, it’s hard to know what to do first and whether it’s “worth doing”. The only way to find out is to get off your butt and trust in your ability to navigate those unknown waters. Only after several dozen hours have been invested will you get a good sense of whether it’s going to pay off.

The idea of spending dozens of hours for an unknown reward is demotivating. Recognizing that, I have started using Trello’s label feature to mark the difficult project cards with ways to start reminders. They provide easy ways to get started on new projects based not on unknown results, but known quantities of time spent doing a certain kind of activity. I know from experience that once I start look at a problem even in the smallest of ways, this quickly leads to ongoing work that is rewarding.

At some point, the idea will see the light of day and get queued up for a week (or “sometime in the next 7 days”) in the PROJECTS THIS WEEK column. This is the pool of projects that I draw from when using an Emergent Task Planner.

In addition to big hairy projects, there are the small-scale task cards that don’t start out as dreams or ideas in the shower. I enter them as new cards directly in the PROJECT BACKLOG, DOING THIS WEEK and DOING TODAY columns, based on how actionable I think it is.

If I do something that wasn’t planned at all, like spending an hour researching the best stick-style vacuum cleaner, I’ll add that as a new card directly in the DONE THIS WEEK column, with a “+” in front of the card name to indicate it was an on-the-fly task.

Feeling a Sense of Accomplishment

The rightmost columns tend to fill up with things I got done during the week. As it grows, I see how productive I actually am.

After the week is over, I archive it so I don’t have to see old deliverables.

A challenge in project planning is defining the set of concrete actions that actually produce results. This is hard work, and is necessary to transfer wishes like, “I’m going to become the best engineer in the world” into a set of actionable steps with observable results. There is nothing new about this.

I think there’s value in NOT defining those steps right away. For one thing, you may not know what they are. So rather than spend a lot of time wondering what they are, or guessing badly, I’m content to just capture the dream first. It’s the heartfelt yearning that’s driving the resolution in the first place, and it needs to be acknowledged. It’s also the qualitative, subjective measure by which we assess our progress toward the goal. For example, I might have the nebulous wish of being a “great programmer”. I don’t know exactly what that means, but I can put it into my PRINCIPLES AND GOALS columns on the left.

The cool thing is that cards in Trello are easily modified or embellished with additional checklists. A card can start as a wish (e.g.: “be a better programmer”) and then be extended with a checklist that are the actionable steps. Trello allows you to convert checklist items into cards too, so a master “Be a Better Programmer” card can spawn various subtasks that are (1) actionable and (2) produce observable results that (3) are aligned with the original goal. These subtasks can move through the system from left to right, until they are done.

Alternatively, I could spend hours writing up a detailed list of things to do to become a better programmer. This is tedious and difficult to do when you are learning something new by yourself, and such lists end up obsolete quickly as one’s priorities change. I like the idea of broadly defined wishes that are fed by the execution of smaller supporting tasks, because it’s faster and more adaptable.

So that’s how I’m using Trello right now, and I’m liking it a lot. It’s been useful as a tool that allows me to see all important project ideas at once, drilling down or moving them with a very simple interface. And since each project is a card with a notes stream and checklists, they become viable mini-project managers when I want to get more formal (but not too formal) about it. I still use the Emergent Task Planner to write down the “Today” tasks, as I like having the paper worksheet to hold my attention for the day’s focus, without the distraction of a computer screen.

For a large part of 2014, I stopped using Trello because I had developed a kind of “allergy to project planning” and adopted a single-focus approach to managing my projects. This had its pros and cons, but in 2015 I decided to come back to a management system. I’ve readopted Trello in a slightly different manner, based on insights gained from reading The Art of Procrastination. The left-to-right organization is still largely in place, but the names of the columns have changed to reflect a different motivator than urgency.