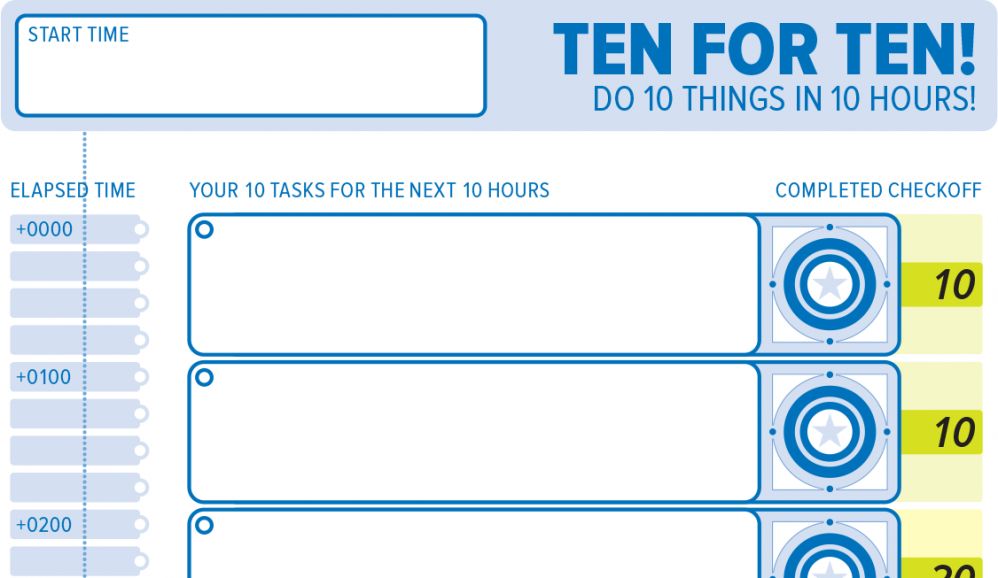 I haven’t made any new form designs in a while, so I decided that I should make one today to see if I would feel good about it. This is a to do list for ten tasks for you to do, designed to make each task seem hugely important and worth checking-off with a big meaty magic marker!

A few weeks ago, I was catching up with my buddy Al in Germany, and he mentioned that his wife had been enjoying using the Emergent Task Planner Notebook. Apparently, she really enjoys crossing items off the list, and does so with great satisfaction. I filed it away.

Over the weekend, being grouchy because I haven’t been blogging my butt off as much as I wanted, I thought that I should get some stuff done. BAM BAM BAM! But I wasn’t in the mood for it, and managed to eke out only a lousy handful of chores. Everything I did seemed to take a long time. But I got to thinking about Al’s wife’s satisfied check lists, and thought that perhaps I should just make something new today. A big fat to-do list with MASSIVE check-off areas. Maybe instead of three things, I should try to do TEN things, but give myself an entire day to do it!

The idea behind this is basically do ten things in ten hours, which might seem laughably generous in terms of time, but I find that it takes me all day to get even three things done. Usually, that’s because I tend to not break my to-dos down into small enough tasks, writing down a line-item like “do bills” which actually is a lengthy process of finding, filtering, opening, husking, re-categorizing, calculating, paying, and then shredding a small mountain of letters. Overall the process takes about 2-3 hours, and I split it over a couple of days. I don’t process my physical mail very often, you see. Another example of a to-do is something like, “Find out if WebGL is easy to use for an upcoming project”. That’s hours of investigation. Add to this the sundry things like “do dishes”, “eat dinner”, “clean living room”, “look up address for Dad”, “reply to Russian emails”, and so on…well, I find it a bit draining. I’d be ecstatic if I got ten things done in ten hours. Some are fast, some are slower, but it probably averages to something like one task an hour. Maybe. I’m just pulling the number out of my ass because I like the way “ten for ten!” sounds. It’s kind of a tribute to my friend Colleen’s 50 for 50 campaign to raise money for charity a few years ago.

ANYWAY, this is a prototype that I’m sharing early to see if anything about it resonates with people. I would start by picking something to do and writing it in at the top. When I finish it, I would then write in the next task. I keep the list of tasks to do in Trello and also write ’em down as they pop into my head. My goal would be to get 10 tasks of any kind, large or small, done by the end of a 10 hour shift.

They’re big! There’s a huge checkbox at the right side! Fill in that circle! Or check it! There are also four quadrants around the circle if you want to fill those in too. Originally I was thinking that they could correspond to 15-minutes of effort per task, but since a task might last longer than an hour I decided not to make it requires. I left them in, though, because they make it look more important :)

You’ll notice that the first three line items have stars in the middle of the checkboxes. I put them there because I think of three things done as being a pretty good day already.

Because each additional task sucks more energy out of me from a dwindling daily reserve, I assigned more points to tasks toward the end of the day. If you do all 10 tasks in ten hours, you can get 1000 points which mean whatever you want. I don’t care if you chose ten really easy tasks; you should get 1000 points for doing ’em all. The size of each award increases quite rapidly toward the end to make each additional push much more worthwhile. My reasoning is if you have 10 tasks worth 100 points apiece, it’s just a straight measurement of how many you’ve done. The idea of getting TWICE AS MANY points if you go from 3 tasks completed to 4 tasks…well, that’s more compelling. It’s sort of like a TV game show like Who Wants to be a Millionaire.

On the left side, there’s a kind of “time ruler” that you can use to mark when you started and finished each task. If you only write down one task at a time at the time you decide to do it, you can draw a line from the task line’s “anchor bubble” to the right place on the time ruler. I put this in there because I thought it might look neat, and it would remind you that TIME IS PASSING. Functionally it might not actually be worthwhile, but I have often been surprised by the interesting uses people come up with. Hopefully, you will let me know what you think.

Try Out the Prototype

You can download a color PDF in either US Letter or A4. I haven’t optimized the colors or line weight for the best quality printing on inkjets, so parts of the form may look a bit murky. You should be able to get an idea of how it feels to use. Let me know what you like or don’t like! Is there an real-life use you think of that this could work with? Do you want to see it as a printed product?

The design, incidentally, has two per page. Use a paper cutter to split the page down the middle after you print it out.

These have been tested in Adobe Acrobat Reader Enjoy!