SUMMARY: I recap the lessons learned from 2009’s Groundhog Day Resolutions process, month-by-month. I also unveil the “brainstorming kit” that I started working on last night.

Technically, the 12/12 review is the year review to see how I did on accomplishing my goals. Let’s see how the year went.

Every year I’ve done it, my goals have tended to change throughout the year. I’ve also noticed that are never specific enough. Much of the time is spent in reflection so I can define the context of my overall goals; I guess this is one of my personal challenges. As a result, my GHDR activities are exploratory in nature, not task-focused. To get the big picture, I can review the past 10 months of GHDR reviews:

It has been a slow learning process. Over the year, I learned more about my personality, my desires, and my place in the world. In particular, the November review marked the start of a new period of motivation and sureness, a result triggered through the visualization processes described in my master vantage point article. However, I think the critical mental shift started much earlier in July, when I decided I needed to be part of things that are bigger than myself; that is, participating in the grand projects and dreams of other people. This involvement has been the catalyst for much of my development, and the motivation for continuing to push toward my own goals because I see other people doing the same. It has been very enriching.

Now that I’m feeling pretty settled in my direction, it becomes possible to FINALLY get my head wrapped around the revenue problem. My major resolution for the past couple years has been the same: achieve financial independence by 2010 so I can start travelling around. It doesn’t look like this will happen by the beginning of 2010, but I’m getting a running start now.

The idea of creating a financial machine has been on my mind since I wrote about the [instructive hours spent playing farming, zoo, and restaurant games][games] on Facebook. Last night, I started outlining the components for my machine: 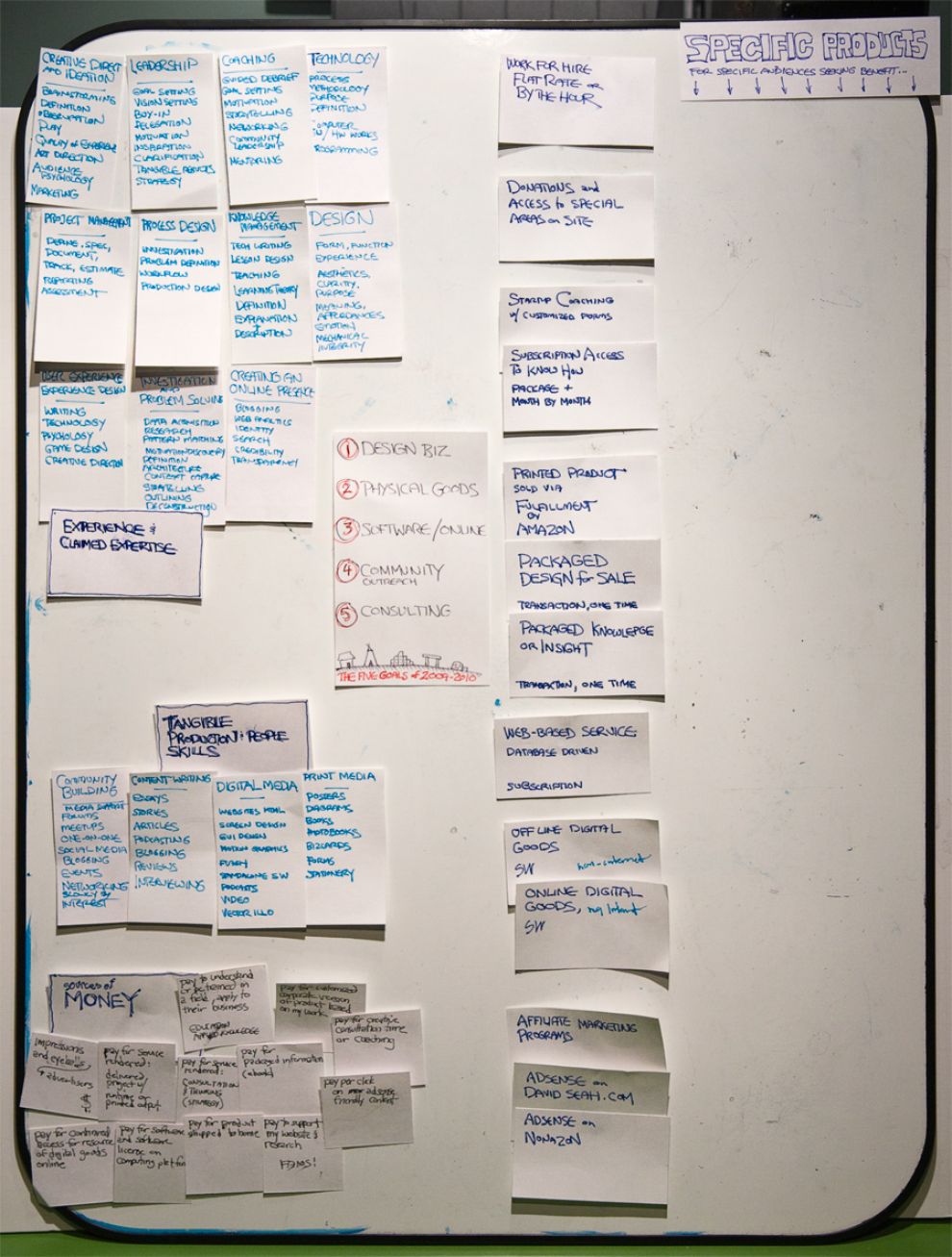 It’s a brainstorming kit from which I can construct revenue-generating ideas. The component groups that are currently available are:

What’s missing are the following groups:

Once these are all filled out, I have the means to create my own products based on randomly-selected elements from each group. If I pick one card each from even just the current groups, I should be able to come up with a product idea that can be evaluated and put into production. These products can then be put into my business plan spreadsheet, which will aggregate the various sources of income and allow me to project future revenue based on whatever targets I choose. For example:

If I had to combine all these ideas together, I could do something like:

The brainstorming kit isn’t quite ready, but this itself could become a useful consulting product. It should be pretty awesome when it’s done.

I’m not sure how I will practice GHDR for next year…it feels like I need to reassess the entire system, because my goals are now on a weekly basis instead of monthly. I know a few other people have implemented GHDRs, so I’ll have to visit their blogs and see how it worked out for them. GHDR is really just a mnemonic device that can be adapted for anything requiring monthly periodic review…but it’s time to put such thoughts aside and celebrate the holiday season.

Past Articles in the 2009 Groundhog Day Resolutions Series