I know I said I was going on hiatus, but I just I got a nice email from a reader today complimenting me on the layout of the blog…thanks Janet! She also asked a question about my old online resume PDF:

In particular your resume’s design caught my attention. How did you create a one-page PDF resume that’s so organized and detailed? Would you be able to suggest resources or pages on how to design a PDF resume from scratch?

The short answer is that I use Adobe InDesign and Adobe Acrobat, which are pricey professional page layout and document management software packages.

The longer answer is that I spent some time thinking about how I wanted people to perceive my resume and how people actually read them:

Most of the time, my resume isn’t being processed by an HR or employee review process, but is provided as a formality, so I don’t really follow the standard format. What is important, though, is that people get a sense of what skills and experience I have. The issue I have with the standard resume look is that they often have long page-width sentences (hard to read) and are filled with sentences that sound like Single-handedly managed team productivity of 50 associates through just-in-time distributed beverage ordering coordination and delivery processes. I am yawning “BS” before I even get to the word “handedly”, so I cater to my own whims by using shorter descriptions in my lists of credentials. My reasoning goes something like this:

Anyway, this is just what I do for my simple resume. I’m generally targeting the case where my resume is being considered by the creative professional for informational purposes, not competing with others as I’ve described above. So your mileage may vary considerably!

So, You Don’t Have InDesign

In answering Janet’s email, I thought about the common problem I face when telling people that I use expensive production graphics software to do my work. The implication is that THEY SHOULD TOO, though it’s impractical most of the time due to the need for training and people like to use what they have available. Most of the time this is Microsoft Word or Excel. While I like Word for straight writing and basic formatting of source text, I hate its page layout tools. They are very finicky, and often times one little layout issue will cascade into an unrecoverable mess. Excel just lacks the fundamental typographic control tools, though it is surprisingly flexible.

I avoid using Microsoft FrontPage on general principle, which is that it is the source of ugly web pages that I have had to clean up. Call me small minded, but I don’t even want to know what it does because of past ills visited upon me by its twisted autogenerated HTML progeny.

That leaves Microsoft PowerPoint. I occasionally have received photo assets that had been copied and pasted into a Word document or PowerPoint presentation, and this creates a production headache because the original file is down-sampled or destroyed in the process. However, I’ve also seen several reader-provided PowerPoint and Excel versions of my templates, and these look fine. I then idly wondered if I could use PowerPoint to recreate the layout without looking too ugly, so I gave it a try. I think it actually works. The advantage of PowerPoint over Word is that you can freely place text blocks and format them as you would in Word. You can place graphic imagery. You can also specify in PowerPoint’s options to produce output aligned to the resolution of your printer, not the screen. And since PowerPoint is part of the most basic Microsoft Office suite, you probably already have it…so let’s rock!

Shown below is PowerPoint 2007 duplicating my resume layout, with the “view grid” and “view rulers” options turned on to make the screenshot look more impressive: 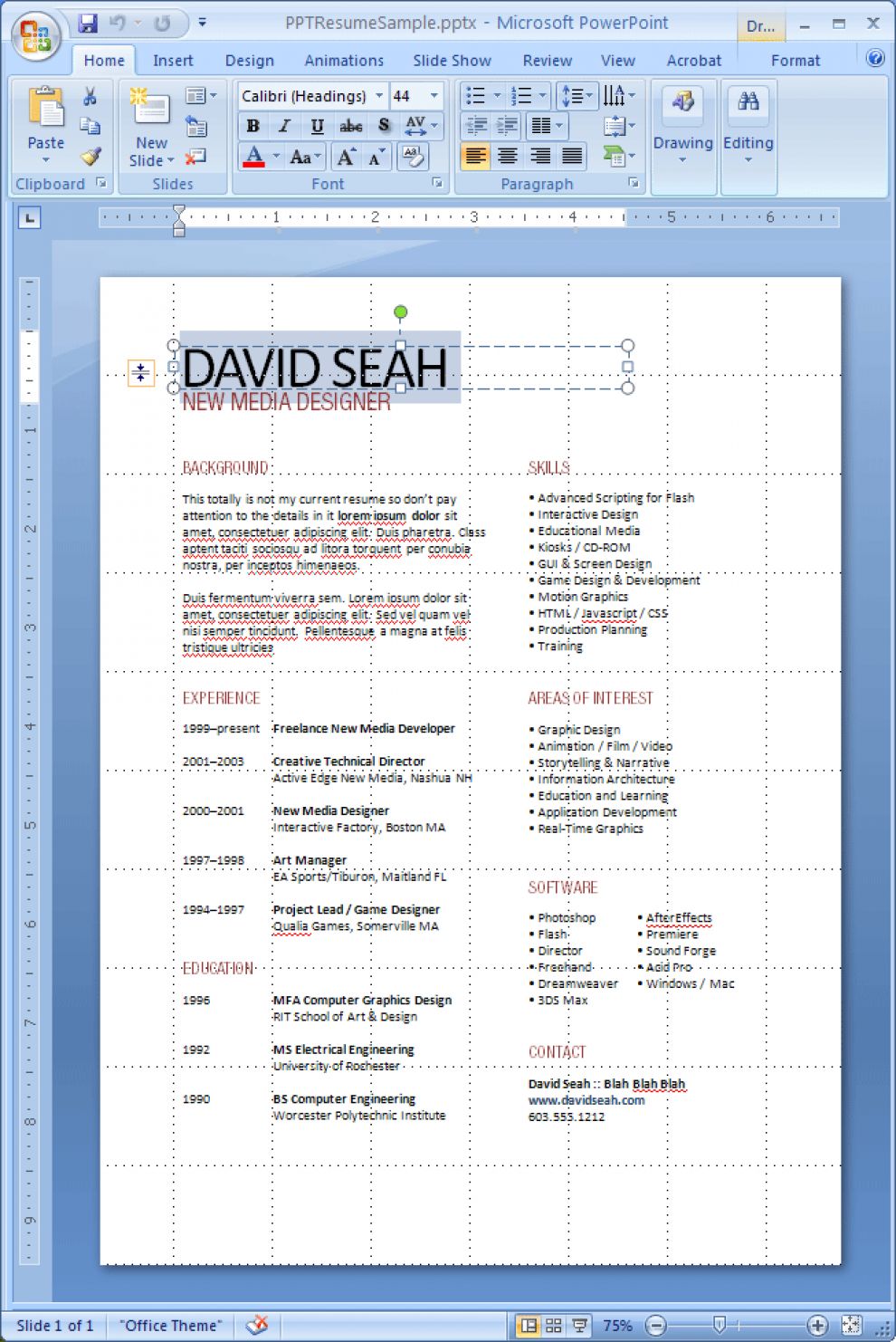 PowerPoint allows you to set the page size of your presentation, so I set it to US Letter. Then I just drew a bunch of text boxes and aligned them in such a way that the white spaces worked together. The grid isn’t particularly tight or well-constructed (in other words, it looks a little sloppy) but the overall look is fairly clean. The unit whitespace I used is the height of a line in the body text, because I didn’t feel like fiddling with line heights for every paragraph. I adjusted the spaces between the headers to be greater than the blank line that separates paragraphs, and just adjusted other parts of the composition so they tended to line up cleanly where it seemed that should happen.

There are a couple of tricks that I had to apply to the topmost header that says DAVID SEAH.

I use Acrobat Professional to create my PDF files, but I imagine there are other providers of inexpensive PDF encoders. I’m not familiar with any of them. Readers, any suggestions? [UPDATE: Several suggestions have been posted in the comments, so check them out!]

If you’d like to play with your own version of this resume, just download the zip file which contains the PowerPoint 2007 source. I’ve also enclosed a version that should work with PowerPoint 2005 versions and earlier, though I’m not sure if it works. A sample PDF is also included for your reference. Please note that this is not my actual resume, though it is using elements from it.

Note: If you are looking for Calibri, the font that I’m using here, it’s part of Office 2007. You can download and install the Microsoft Office 2007 Compatibility Pack to get them; check this article for some tips on other options.

NOTE: There have been some really great reader comments for this article; you should definitely check them out! :-)