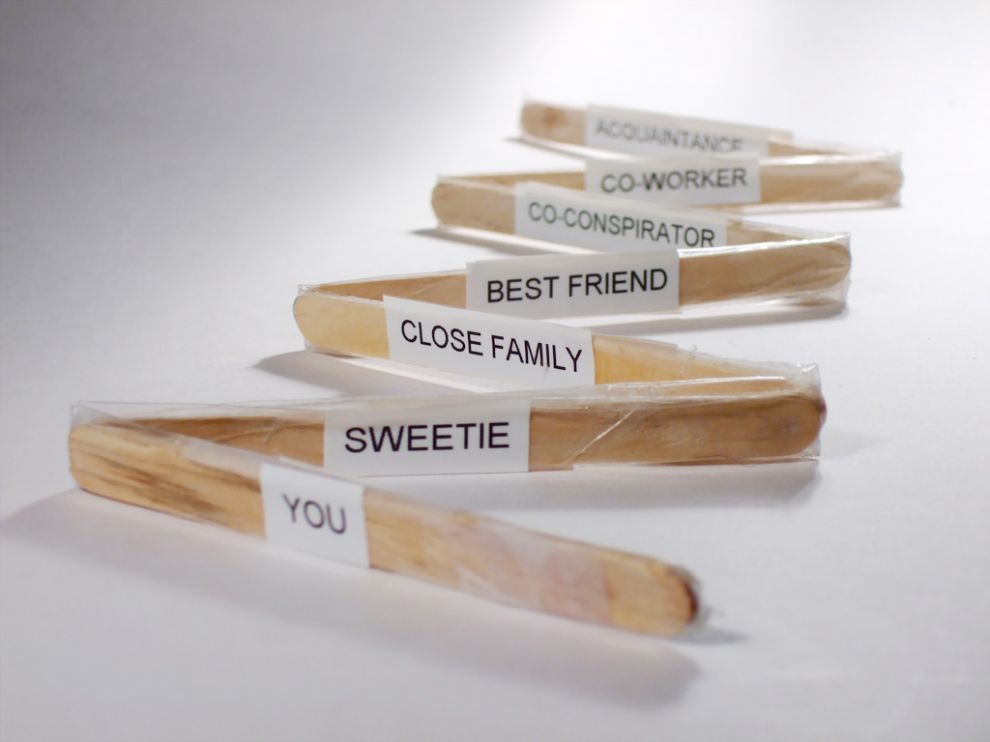 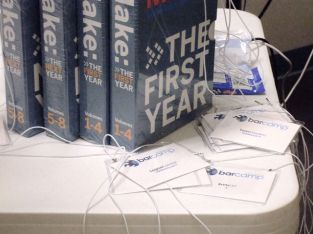 Last weekend was Barcamp Manchester in Manchester, New Hampshire, which had a pretty good turnout of around 50 people. This year there was a new event, The Make Room, made possible by the donation of several awesome Make Magazine Boxed Set collections by O’Reilly Books. The various books were handed out throughout the day to the people who obviously needed them, and the Box Sets were reserved as prizes for the Make Room contests. 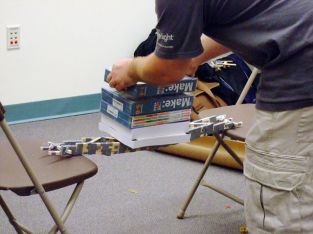 I first entered the Popsicle Stick Bridge Building Competition, but alas: my clever design relied on craftsmanship to implement correctly. I ended up pulling out of the contest, but this left me with leftover parts for the Chindogu Competition.

Chindogu is the Japanese art of inventing items that solve a problem which are burdened with unfortunate and/or embarrassing side effects that, for all practical purposes, render the invention useless. I seem to enjoy making things in this vein: the Procrastinator’s Clock and the Gauntlet of Productivity are two such items that I’ve posted about in the past. Apparently the muse is still with me; I’m very pleased to present the prize-winning chindogu of Barcamp Manchester 2007, an invention I call The Social Yardstick.

The Social Yardstick allows you to always maintain an appropriate distance from the people you care about.

Physically, The Yardstick is a measuring device that collapses to fit in your pocket. The prototype here is constructed out of popsicle sticks and packing tape. Each popsicle stick is labeled a listed below:

The idea for The Social Yardstick was trigged by something that Lokesh Dhakar said at the table I was working at. I was stretching my popsicle sticks (leftover from my failed bridge) in an accordion-like fashion, and he said something about measuring space. I then thought of a time when some friends of mine were having a secret office romance; I’d observed them talking one day standing way too close together to be casual co-workers. I mentioned this to my friend later in case they didn’t want to blow their cover. If they had some way of measuring that space between themselves, they could have maintained discretion with ease! And thus, the Social Yardstick idea was born.

The basic principle: your physical distance from someone often telegraphs how “close” you are. Here’s a diagram to help illustrate the point: 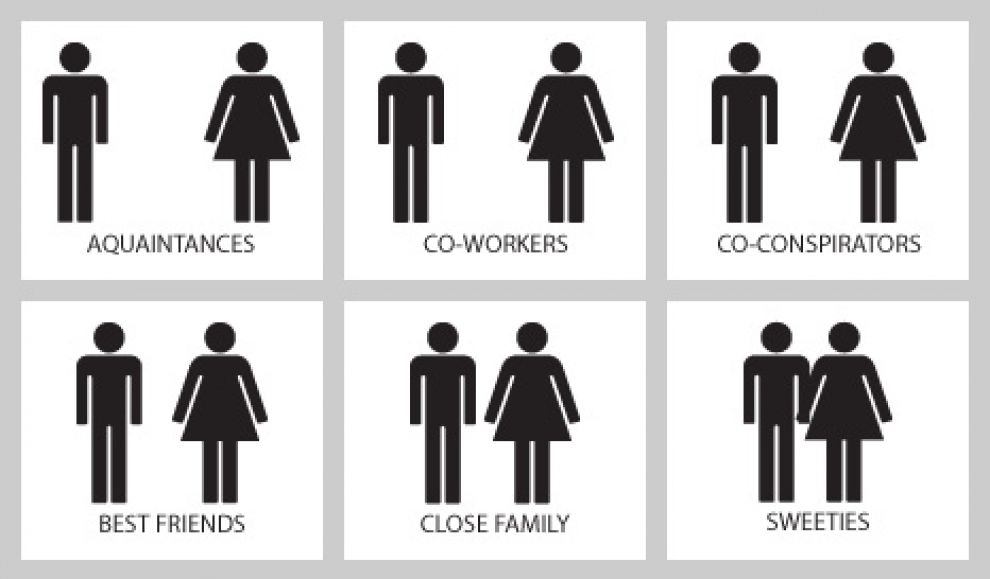 To use The Social Yardstick, merely unfold its length and stretch between yourself and the person you are standing near. Read the label on the segment that is closest to the other person, and adjust your distance appropriately. Here are some other example uses:

p>You can also use The Social Yardstick as a relationship discovery tool. Say you are in a situation where you are trying to figure out the relationships between two people so you’ll have something to talk about at the water cooler. While both parties are standing in place, have the first person hold the stick close to their body and stretch it toward the second person. The label on the stick segment closest to the second person will reveal their actual relationship! You may be surprised by what you find! Just remember: as with the Heisenberg Uncertainty Principle in quantum physics, the act of directly observing your subjects will alter the measurement (e.g. people cough, avert eye contact, and move apart). You may need to apply indirect means of observation over several sessions to arrive at a conclusive reading. 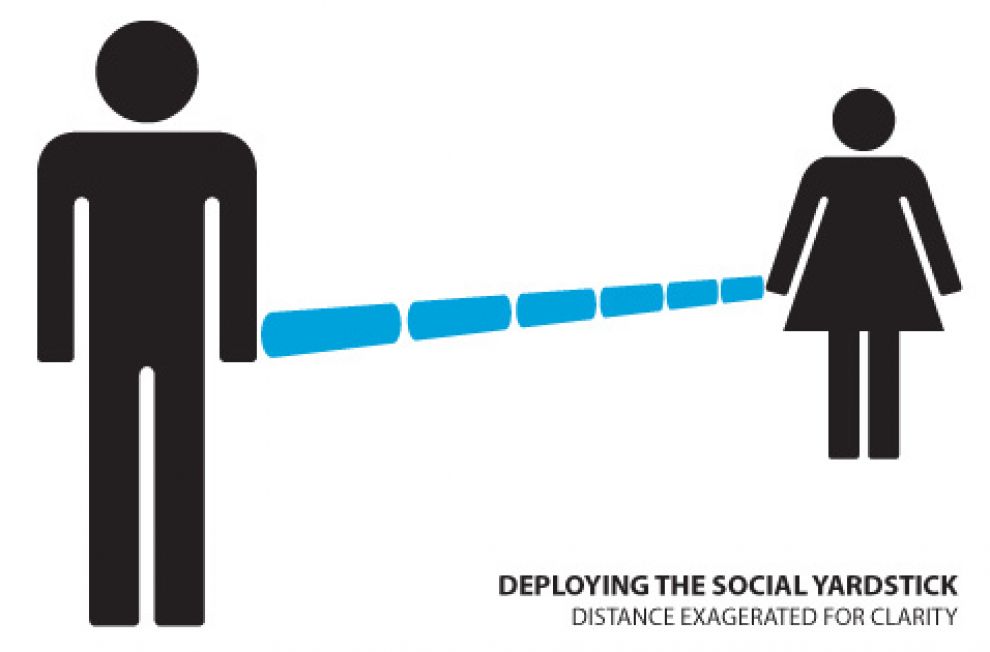 The pre-calibrated distances on The Social Yardstick are based on Urban New England Standards of Personal Space, which is what I’m most familiar with. You may find that you need to adjust for the differing expectations of your locale and culture. For example, people who live in sparsely-populated rural areas probably need a longer yardstick. Likewise, people who work in loud office environments may have to stand closer to just hear each other. And all bets are off when you’re in an elevator or picking a urinal in the Men’s Restroom.

If you have built your own Social Yardstick or have made something similar in the past, let us know in the comments below! Support Social Unity through Appropriate Personal Spacing!