Please note that this version of the Emergent Task Planner has been replaced. Please visit the official ETP Page at http://davidseah.com/pceo/etp for the latest downloads.

As I wrote earlier, I found the new Menu of the Day form to be too cumbersome for my actual daily use. Conceptually, it ties together a lot of important functions, but my main design error was to forget about mindset and context. A good productivity form is one that provides focus and stability for the day as a support tool. If the form makes you think too much, it just isn’t as useful. Adding the weighted value points mixed planning and production together in a way that was not useful during the day.

So here’s a stripped down version that I’m calling an Emergent Task Planner, AKA version 6.1.

I’m not quite sure if it really is the mirror of the Emergent Task Timer, but read on and tell me what you think.

There are three parts to the form:

The part I liked about the earlier MotD form was the Schedule Grid, which allowed me to visualize the day as a series of discrete chunks. This has two advantages for me:

As a bonus, I can log billable time in the task area, so I don’t need to bust out another sheet for that separately.

Usage: Beginning of the Day 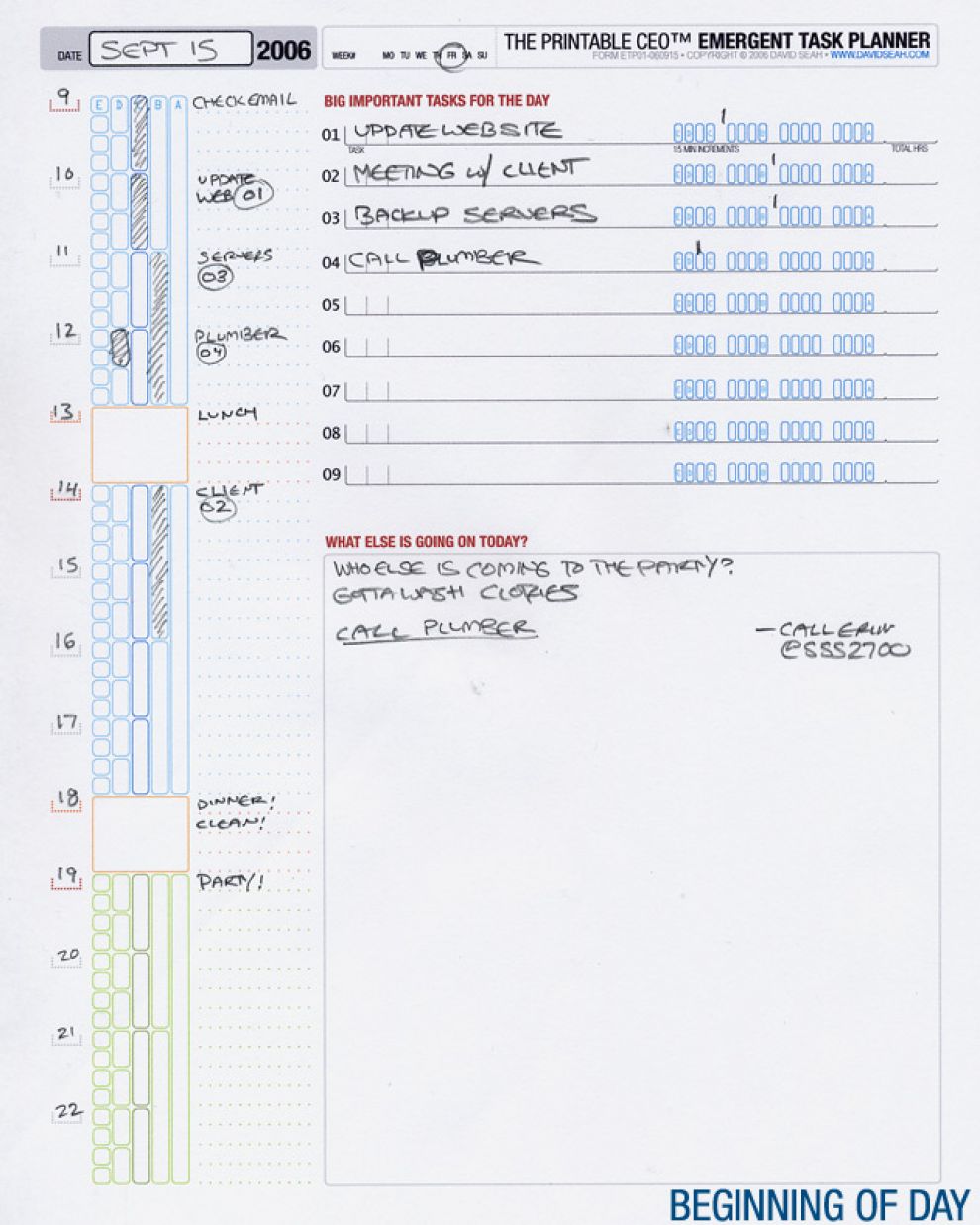 NOTE: This is a made-up example form, based somewhat on my actual Friday.

At the beginning of the day, I wrote down a few things I needed to do, estimated some task durations for each task, and took a few notes. I left some unscheduled time at 4PM, because I know that after client meetings I’m usually wiped, and that part of the day would be ad-hoc.

Some details I should point out: 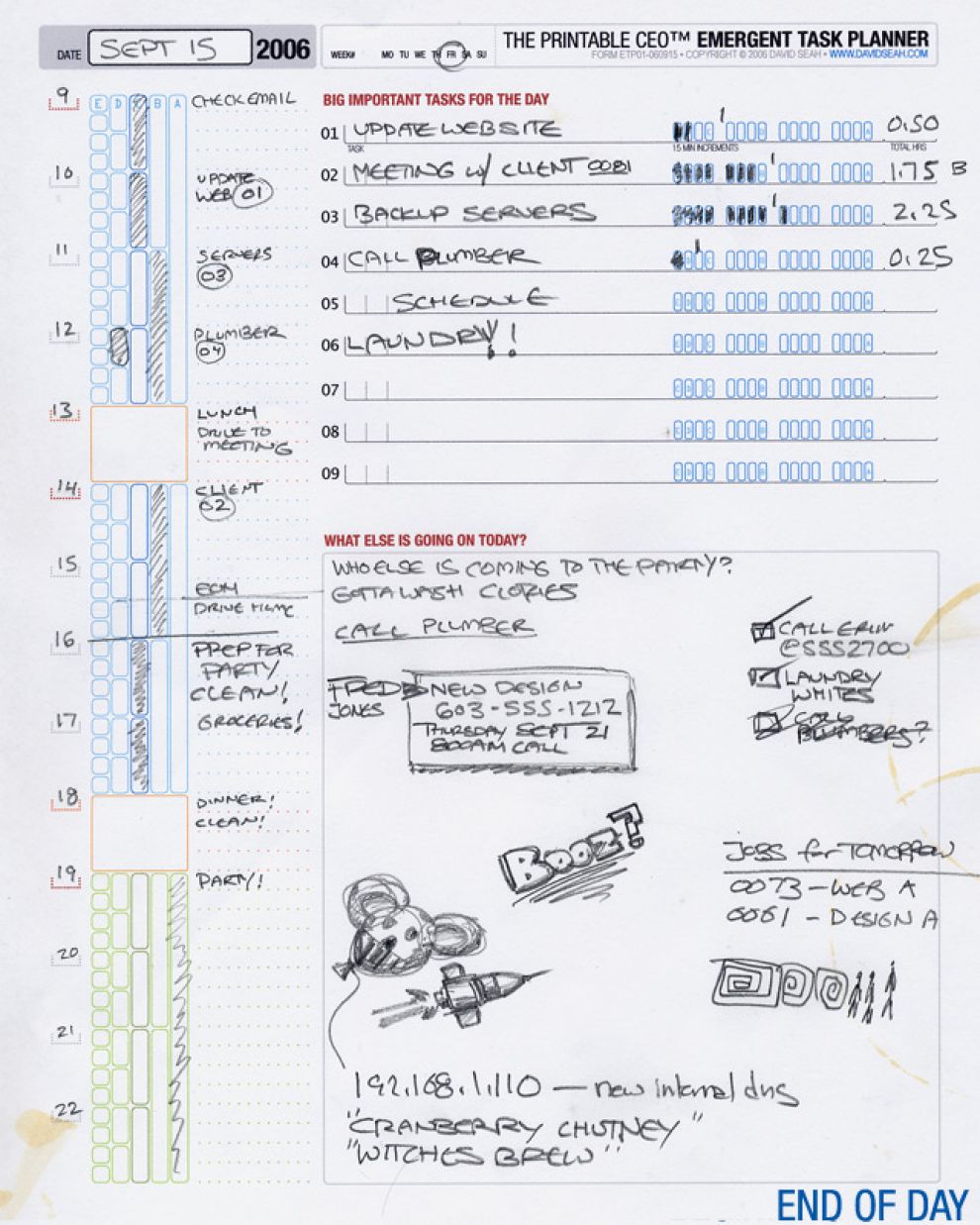 By the end of the day, I’ve used the notes area extensively. This would have been the piece of paper in front of me, so I keep it handy as scratch pad and task reminder. I made an impromptu checklist on the right-side of the note area, wrote a few phone #s down, doodled, and noted some information I wanted to remember for tomorrow.

You’ll also see that I ended up adding planning to the 4:00PM section after the client meeting, since I had to do that anyway. I also added two more tasks that I thought I would have wanted to do, but didn’t actually get around to them. When it comes to doing the next day’s form, I’d just copy those items over.

In the Task Area, you can see the actual-versus-estimated time taken for the tasks that got some time. Total hours are summed on the side; I’ve marked item 02 as billable with my B code.

Usage: End of the Week

At the end of the week you end up with a sheet for each day of the week. Unlike the Emergent Task Timer, which is an organic “what’s going on” tool, the Emergent Task Planner is for people who want to get something done in a more time-structured manner. It is basically the Task Progress Tracker with the addition of the Schedule Grid.

I’ve heard of some people using the Task Progress Tracker as a project planning tool. At the beginning of the project, they list out the tasks they want to get done and estimate time, and that sheet itself becomes the task list complete with checkoffs. I can imagine this new form being used in a more day-to-day planned way. One thing you can do is note specific meetings and other daily interuptions, which visually shows when insufficient contiguous time is available to really tackle a task.

Speaking of the Schedule Grid, I just found out that the idea of working for a fixed period of time without worrying about “finishing” is called time boxing. I stumbled upon this nugget of information when visiting David Cheong’s blog; he writes:

[…] By fixing the amount of time we spend on a given set of tasks, we can focus on doing the things that matter, give us motivation to start, prevent overruns and use our “null” times effectively. In contrast, if we worked on things until completion in one sitting, we’re less likely to start on complex tasks, more likely to overrun on open ended tasks and leaves us with less time and motivation to work on the next set of tasks.

This form might be useful for time boxers; if anyone out there is one, I’d like to hear about how you approach tasks. Check out the article too, there’s a lot of good stuff in there.

If you’re wondering what the A B C D E codes mean, the Menu of the Day article explains it; they stand for increments of time:

NOTE: The old designs have been replaced in 2010 and no longer follow this format. Go to the Emergent Task Planner Official Page. The following 2009 editions are left here for historical interest.

Or Save Your Expensive Printer Ink

You can now buy high quality offset-printed pads of 75 sheets, using the new blue and orange color scheme, on Amazon.com. And yes, you can take advantage of that Amazon Super Saver Shipping when you buy more than $25 of stuff from them. Check it out! Your purchase helps me spend more time blogging and designing about productivity, and I appreciate it!