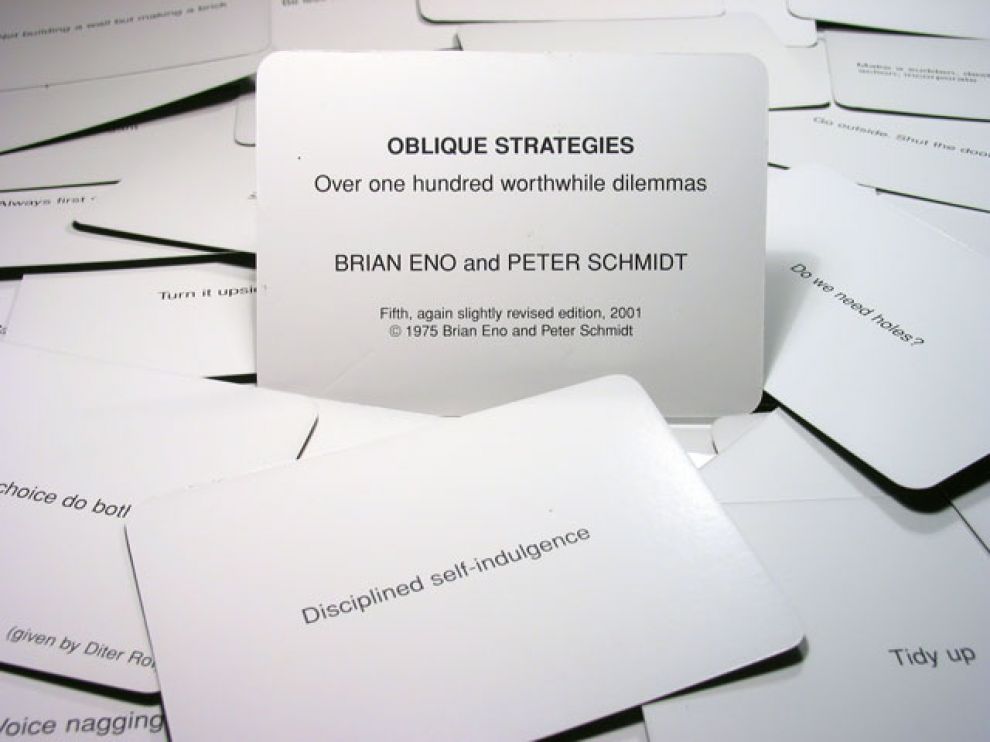 Years ago, I was in the middle of developing a set of my own graphic design axioms, like “Make something really big! Then make something really small! Split the difference!”, “Steal the colors from Mother Nature!”, and “Create color harmony through irresponsible tinting!”…evil stuff like that. I became curious whether other people had already come up with a list, searched the Internet, and came upon across the Oblique Strategies. They were created way back in the 70s by experimental musician Brian Eno and his painter friend Peter Schmidt. Eno writes (via the Oblique Strategies site):

The Oblique Strategies evolved from me being in a number of working situations when the panic of the situation – particularly in studios – tended to make me quickly forget that there were others ways of working and that there were tangential ways of attacking problems that were in many senses more interesting than the direct head-on approach. If you’re in a panic, you tend to take the head-on approach because it seems to be the one that’s going to yield the best results Of course, that often isn’t the case – it’s just the most obvious and – apparently – reliable method. The function of the Oblique Strategies was, initially, to serve as a series of prompts which said, “Don’t forget that you could adopt this attitude,” or “Don’t forget you could adopt that attitude.”

While there are electronic versions of the deck available (including one for your Palm Pilot), I like the feel of crisp coated cardstock, so I ordered the 5th edition reprint from England at EnoShop. It’s not exactly artisan quality, but isn’t it nice to have actual printed cards? Yes, it is! Although, they were a bit expensive at £30 a pop plus international shipping. 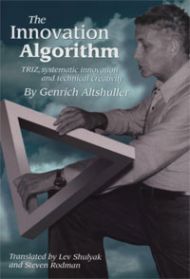 If Oblique Strategies is the creative way to solve problems, then TRIZ–the name comes from the Russian acronym for Theory of Inventive Problems Solving–is the systematic engineering approach. I first read about it in a BusinessWeek article a couple years ago, and picked up The Innovation Algorithm soon afterwards. TRIZ is the self-described science of invention, with well-defined methodologies and processes. What attracted my attention were the 39 Contradictions and the 40 Inventive Principles. “The Contradictions” are properties of an invention that you want to optimize (with probably tradeoffs between conflicting desires), and “The Principles” are the methods by which you can try to work around them. There’s tons of stuff on the Triz Journal site, much of it quite dry; this article, Creativity Breakthroughs with Children Using Higher Level Thinking, is one of the more accessible ones. 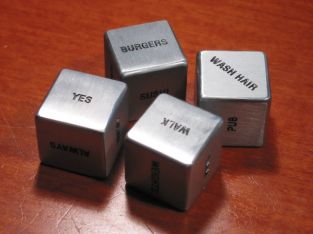 To date, I haven’t looked at either of these systems that deeply–The Innovation Algorithm remains largely unread next to my copy of Flow–but I was excited by the idea that there were many systems for creative thinking. Even if I didn’t apply the systems rigorously, I reasoned, I would still have pre-seeded my mind with great ways of getting un-stuck…it would just take a while to find ’em all. Fortunately, idea consultant Martin Leith has already cataloged dozens of idea generation systems over the past 15 years. Leith writes:

This website lists and explains every idea generation method I’ve encountered during the past 15 years. It is the result of extensive research; my many sources include books, management journals, websites, academics, consultants and colleagues. The methods have been drawn not just from the worlds of creative problem solving and innovation, but also from other worlds such as organisational change, strategic planning, psychotherapy, the new sciences and the creative arts.

If you are a multi-disciplinary problem solver, then you really should haul ass over to Leith’s All Known Idea Generation Methods website and drink it all in. I found it humbling—and inspiring! It’s a really fantastic resource…thanks dude!