The Sky, Your Screen

I love video games and computer graphics, but I’ve been wondering lately if my thinking has been constained by the small screen. I’ve been researching how other people are using larger-scale media: physical spaces, simulation environments, exhibit design, etc. to find out.

It so happens that one of the guys in my New Media group, David Cort, works for the Christa McAuliffe Planetarium as a media designer. He invited us for a visit behind-the-scenes; it turns out that a Planetarium is an interesting blend of old-school multimedia, computer graphics, personal showmanship, and best of all: a giant freakin’ screen. 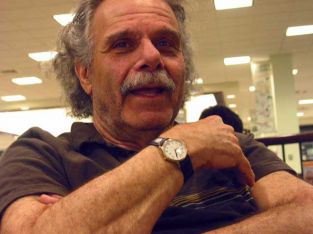 David has a physical resemblance to Einstein, and one of his extra duties at the Planetarium is to portray him in one of their shows, “Celebrating Einstein’s Greatest Hits”. Since the Planetarium is phasing out their 12-year old Evans and Sutherland DigiStar I (more on that later), the Einstein show is going with it. So this Friday I went to check out David’s last performance on the old gear. 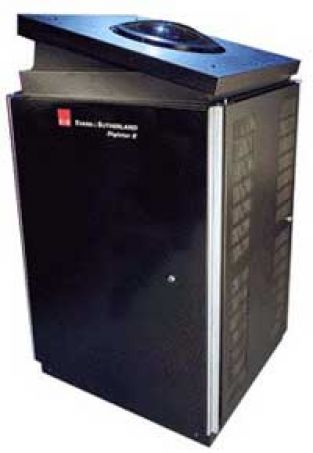 The McAuliffe Planetarium’s dome theater can be thought of a computer display that surrounds its users. The 40-foot dome is host to 92 seats, which creates a surprisingly intimate environment. In the middle of the room is the Evans & Sutherland DigiStar I projector, which consists of a 160-degree fisheye lens and a monochrome cathode ray tube–basically, a very bright video monitor projected through a fancy lens up onto the ceiling. They get full 180-degree coverage of the dome through some optical trickery with the lens setup. The projector enclosure is about the size of an R2 unit (yep, I’m a geek!)

From what David told me, and what I could corroborate online, the DigiStar I uses a VAX mainframe with some custom graphics hardware as the graphics processor. Back in 1992, you needed something this big (A VAX is at least the size of a couple refrigerators) to handle sustained animation rates and 3d-calculation of thousands of star points. Evans & Sutherland was well-known for its realtime 3D simulation technology in the early days of computer graphics, and it’s only recently that desktop PCs have caught up. A blazing-fast PC back in 1992 was a 486DX2-66 w/ 4MB of memory. It did not have any kind of hardware 3D acceleration or fast data capability, so it makes sense that they used a special-purpose mainframe to drive the system. As computers shrank, E&S upgraded their system components: the DigiStar II replaced the VAX with a desktop SGI a few years later, albeit with the same monochrome fisheye projector. I just looked at the specs for the DigiStar 3, which is an entirely digital, up to 64-million pixel system that can use laser projectors. There’s a nifty ds3vid that shows what the system can do…pretty cool. 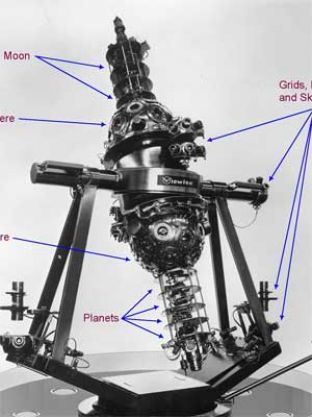 Back to the DigiStar I: The display quality is not as good as an optical system like a Zeiss. The entire dome is illuminated by the single projector sourced by that tiny 7″ monochrome CRT tube. As a result, it’s a bit dim; I had some trouble seeing the stars at first. However, when things start moving, the effect fills your peripheral vision and it rocks. There’s also something about green monochrome vector graphics that I find really exciting…perhaps it’s the sense of mathematical precision, or memories of playing Battlezone in the arcade. Brighter and in higher fidelity, the effect must be pretty amazing.

The actual show program for Einstein’s Greatest Hits is based around a traditional digital multimedia presentation, with the beginning and end capped by starfield animation provided through the DigiStar. The entire presentation is guided by an educator/host that interacts with the audience. It’s a tough crowd…there are fidgety kids, hard-core science nerds, and completely un-science oriented people sitting in very relaxing chairs in a dark air-conditioned room.

The show opened with the DigiStar animation of Einstein’s face forming out of stars, the traditional multimedia part began. The presentation was augmented by a system of 40 Kodak carousel slide projectors arranged in a circle around the circumferance of the dome; they projected still graphics of nebulas and constellations across the entire dome. At the front of the dome, a regular high-resolution video project is used to show content from a Windows-based PC. To add some pizzazz, the dome is also equipped with theatrical light effects (flashes, dimmable colored lights), which were triggered by the host at dramatic moments.

The most impressive part of the show for me, besides David’s performance as Einstein, was witnessing the full power of the DigiStar 3D sky. Although the stars were dim and the framerate a little low–I’d estimate about 20fps–the feeling of flying through stars into a blackhole was very compelling. The effect is so powerful that the host told us that if we felt dizzy, just close our eyes. Even with this warning, I was told, the staff sometimes has to bring in a bucket and a mop. All I could think was I would love to play a space simulation at this size. The dome room could be made to resemble the bridge of a starship…that would be awesome.

When I got home, I dug around a bit to find out about the capabilities of the new system that will be replacing the DigiStar: it’s called Digital Sky from Sky Skan. It is based around high-resolution video projectors and proprietory PC software, all synchronized to create a seamless graphics space. Media elements such as animation and bitmaps can be easily positioned anywhere on the dome geometry via a scripting langauge. From what David tells me, the graphics processing is handled by 8 workstations with 3D graphics cards, ganged together to create one giant space. Each of the graphics cards maps to one section of the dome, synchronized through another computer that acts as the central show controller. The system can also import 3D geometry in the .X format and show it anywhere on the dome. The scripting samples I came across seem more batch-driven than procedural, so the kinds of games one could make are probably somewhat limited.

I found there are companies that specialize in the production of media for dome theaters; Sky Skan maintains a partial list on their website. I’m curious whether there are opportunities for third-party development. The samples I saw online could be so much cooler…imagine something like the 2advanced interface filling an entire 40-foot dome, with individual input controllers feeding from in-audience operators. Could the dome be divided into different interactive zones for groups of kids? That would be so awesome.

p>I’ll have to read more about education and learning theory to figure out what this could mean. It’s interesting to think about while I figure out a way to get some design time on one of those humongous screens.