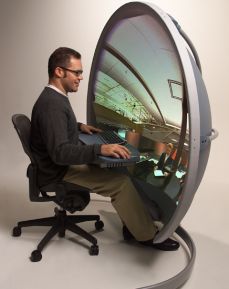 Continuing with my obsession with giant screens, bear witness to the elumens visionstation. It’s based on technology similar to what’s in use in digital planetariums, except it’s sized for one person. Wow! Why didn’t anyone tell me before? This thing has been out for 3-4 years!

HowStuffWorks has some additional information: Although you can plug your PC right into the projector unit, you need to use software to pre-distort the imagery so it looks correct on the dish-like screen. This is pretty easy to do with their software for static images, but real-time 3D probably requires some trickier processing.

UPDATE: This elumens whitepaper says that you have to modify your 3d engine to use a software module they provide. Other interesting facts about designing content for the system are in there too, like the amount of light splashback you get from the curved screen washing out colors. A basic system, including projector, will set you back about $25,000…ouch, but not bad. 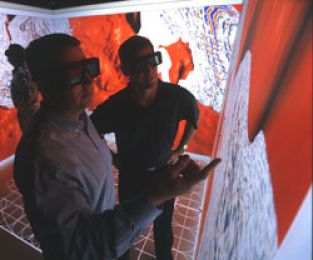 What’s also interesting is that the virtual reality market was worth some $24 billion in 2000, according to this article in Mechanical Engineering World. What, there’s a VR market? I thought that went out of style with Mondo 2000, but today mechanical engineering is the big buyer of these systems. Car manufacturers, for example, have giant “WorkWalls” capable of 1:1 scale display of prototype automobile models. Yum. There’s also an offshoot of VR called CAVE originally developed at the University of Illinois at Chicago’s Electronic Visualization Laborator:

CAVE Automatic Virtual Environment can also be defined as a “VR Theatre Display” or a “Spatially Immersive Display (SID)”. Using multiple projectors, the CAVE ™ display is configured with stereo, rear-projected graphics (3 walls and the floor) and viewed with stereo glasses (shutter glasses).

Very interesting. I would love to see one of these things in action.