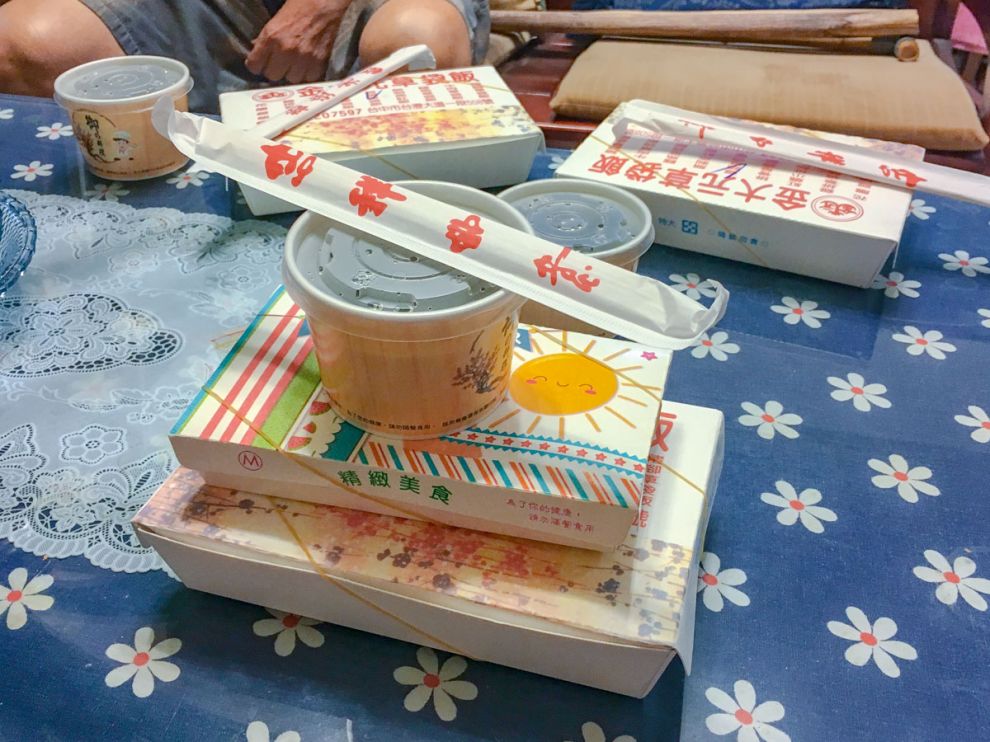 It’s becoming clear to me on this trip to Taiwan that the kind of traveller I am is a bit on the boring side. I’d call myself a nomadic homebody, someone who likes to travel to a new destination to just take my time exploring from the comfort of a home base. Perhaps this is why I’m more excited about box dinners here called biendang. These are the Taiwanese version of Japanese bento, yet another way that Japanese colonial rule influenced the culture here. I love biendang, and this is the first time that I’ve gotten to eat a lot of them in a row.

Dad and his foster son A-bun have stopped cooking at home as it’s difficult to just cook for two, and Taiwan is filled with inexpensive biendang options. The average cost of these lunches ranges from 60-90 New Taiwan Dollars (NT), which is two or three bucks. It’s ridiculous how much variety of cheap, good food there is here.

Here’s all the ones I ate, starting with the bento from All Nippon Airlines and ending with something I bought from the 7-11 convenience store (also a cool Japanese-Taiwanese shared love): 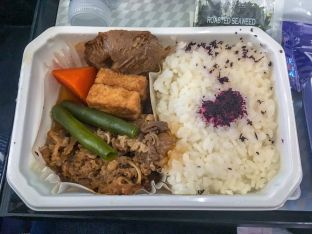 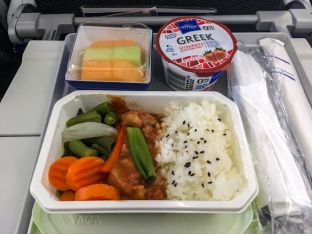 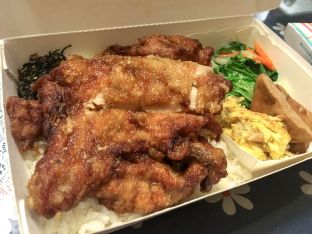 Our first two selections are from All Nippon Airlines (ANA), which is my favorite airline to fly to Taiwan. For dinner, there was a shaved beef and onion dish with plum-garnished rice and some kind of bean curd (ABOVE LEFT). It reminded me of something I’d had before (maybe gyudon?) but I can’t remember…it was good.

For breakfast was a kind of savory-sweet pork (ABOVE MIDDLE) dish with some vegetables. Usually I don’t eat rice because I’m watching my sugar intake, but it’s VACATION TIME and I figured I would enjoy it!

Once in Taichung, I was presented with the first of many Taiwanese biendang. This one (ABOVE RIGHT) is a fried chicken bien dang that has a side of scrambled egg, meat-stewed bean curd, and a typical leafy vegetable with some onions and carrots tossed in. There might be some pickles in there too. PRETTY GOOD. I asked how much it cost, and I believe this one was NT$90 or $3.00 US. I’m not sure if that includes the soup that is often served with these meals. It was a kind of miso soup, in the watery Taiwanese style. A-bun is from a rural area, so his tastes run traditional. 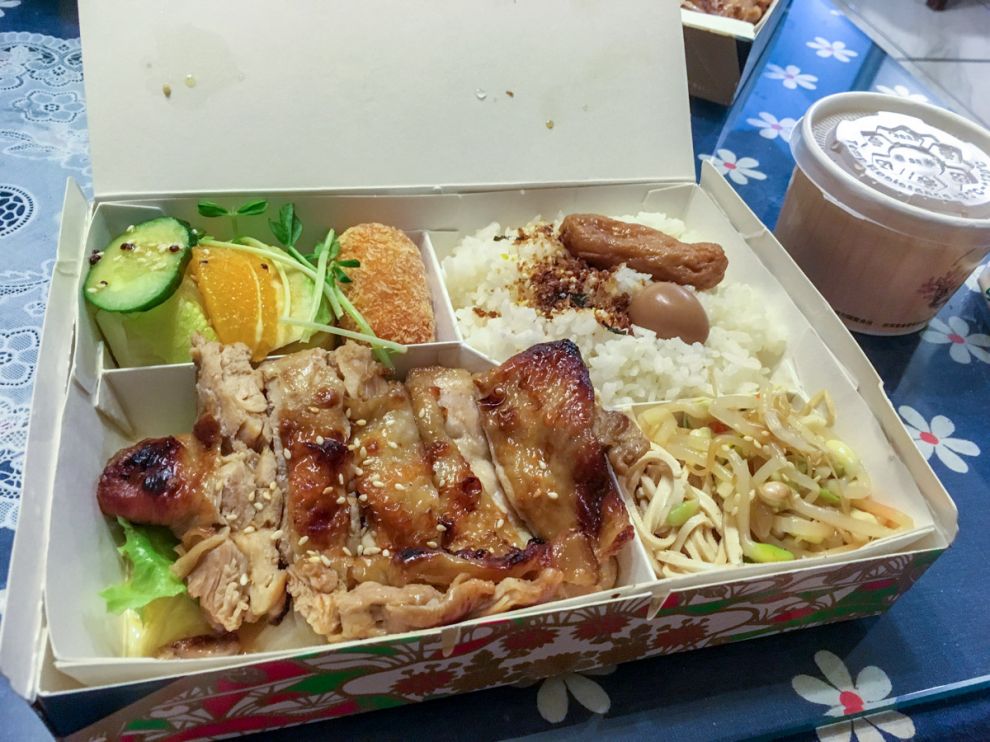 A-bun was choosing the meals, and he and Dad like chicken, so the next lunchbox was a “Japanese style” bien dang (ABOVE). This one was actually more expensive, at US$4.00, but the ingredients were more interesting. The chicken thigh was marinated and deboned before being expertly fried. There is a fried potato croquette (or korroke) and some fancy cut-up fruit. The egg (Taiwanese seem to love eggs) is a QUAIL EGG that has been stewed in soy sauce. There are some string bean curd mixed with bean sprouts too, and of course a pickled daikon radish.

During dinner, I used my broken Mandarin to ask A-bun what his favorite biendang was, and he said it was “komba” but my dad didn’t like it because it was too fatty. I didn’t know the word, but it turns out that komba is the Taiwanese word (or something) for pork belly (the same cut where bacon from), which is totally one of my Asian food mastery goals!!! I conveyed to him that it was my favorite too, so he promised to take me to the Taichung City Second Market, a traditional style marketplace that I think dates back to Japanese colonial times, for an early breakfast (BELOW) 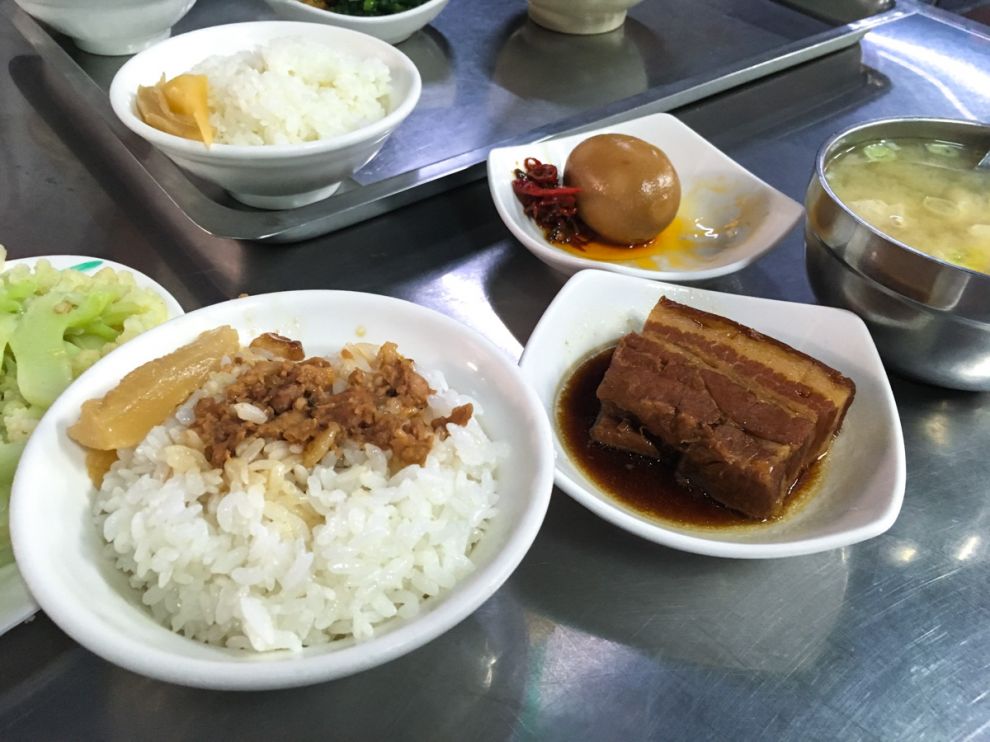 He explained that you can only buy it early in the morning or late at night, but it is also the cheapest biendang you can get at 60NT. We went at 600AM and I watched the setup. A “traditional market” is a nice way of saying that the environment is quite dirty in appearance, but the food is cheap and good; many of these vendors have been in the same location for decades and reputation is highly prized in the hyper-competitive Taiwanese landscape. 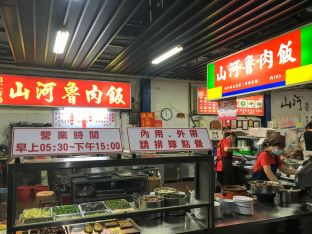 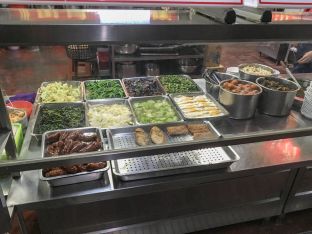 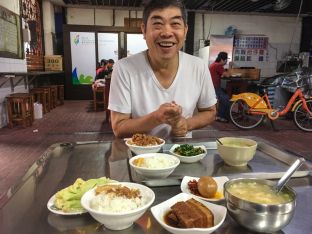 You can see the serving area (ABOVE LEFT) which consists of several side dishes (ABOVE MIDDLE). To the right of the side dishes are the main meats, the aforementioned pork belly and some kind of green leafy soup. It looked like a LOT of food (ABOVE RIGHT) but they were small dishes and they went down smoothly. There are other kinds of delicious Taiwanese breakfast that are more in the tradition of the Mainland Chinese occupation post-1949. I’m a bit more familiar with that and I love it too, but this was a special treat because I am particularly curious about how the pork belly was cooked, and this gave me some idea of the temperature, duration, and spicing used. 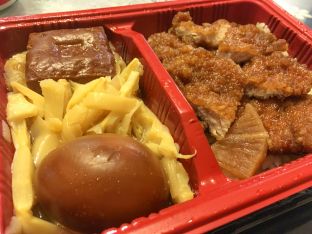 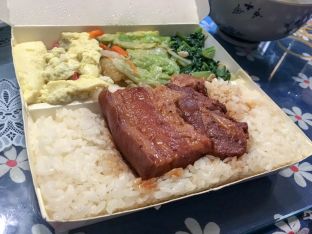 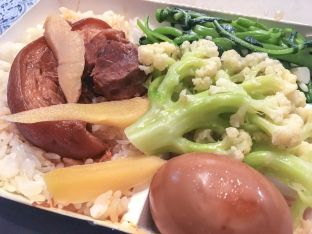 My favorite kind of biendang is the classic pork chop over rice, which is famous in Taiwan for being served by the Taiwan Railways Administration (TRA), which traces its roots back to the late 1800s. This biendang is NOT that famous style (ABOVE LEFT), but it is pretty good. The pork chop is exquisitely fried in I think sweet potato starch. I’m not sure what’s binding it. There is also a stewed piece of daikon, the always-present egg in the form of “lu dan” that often accompanies lu rou fan, which is another personal favorite. Notable is the inclusion of pickled sour bamboo, which is a nice crunchy accent to the sweetness of the pork. Finally there is a stewed bit of tofu, probably from the same pot that the lu dan was made in.

Next up is another pork belly biendang (ABOVE MIDDLE), more of a dinner-style one from a different place. I actually liked the way this one tasted better than the breakfast one from earlier. The ingredients are simple: soy sauce, some rock sugar, star anise. There is a variant where you use ginger and green onions, but they apparently should not be mixed with the star anise version (according to A-bun, anyway). This was news to me, but it makes sense; I didn’t taste any ginger or green onion. Or garlic or cinnamon, for that matter. Recipes for the Taiwanese red cooked pork shank call for all of them, but maybe it’s different for pure braised pork belly in Taiwan…HMMM.

Next is yet ANOTHER braised pork belly biendang in a different style (ABOVE RIGHT). This one was not particularly memorable, but it did reinforce that it’s probably cooked at a very low simmer for not very long. I see little evidence of shrinkage of the skin or contraction of the muscle fibers, and it’s not mushy. I’m guessing a couple hours at maybe 160-170 degrees in the soy sauce bath? The meat may also be pre-marinated or brined in a salty-sweet liquid overnight before braising; the texture of the meat was kind of smooth, reminding me of brined chicken.

After days of pork belly, Dad decided it was time to have a special barrel roasted chicken from a nearby street restaurant that specializes in it. Taiwanese homes don’t typically have ovens or even large kitchens, so there are a lot of specialty restaurants that serve this kind of thing. 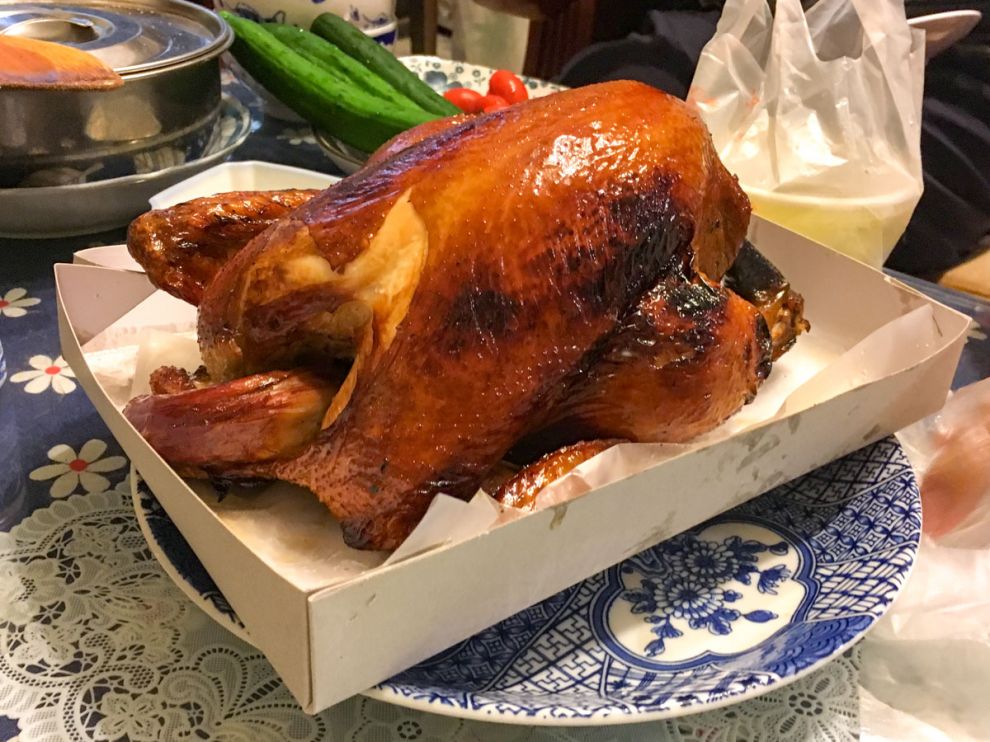 It is easily the best roast chicken I have ever had. It’s sweetly caramelized but smoky-savory. The chicken is tender but doesn’t ooze juice all over the place. It also comes with an interesting dipping sauce that is like a brothy gravy that has the same savory-sweet characteristic of the chicken itself; I’m guessing it’s what they use to marinate the chicken AND baste it over hot charcoal.

On the day before leaving Taichung, we had a special Beijing Duck treat. Cost: approximately US $12.00 for all this delivered by motorscooter: 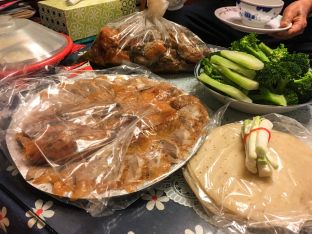 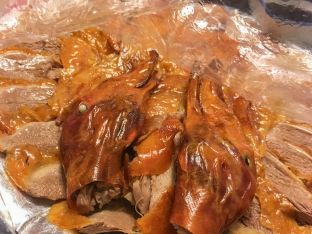 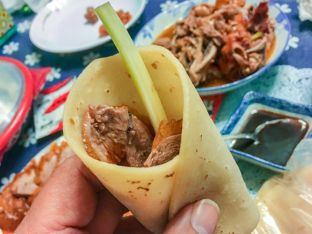 You get the entire duck in a bag, with the delectable skin arranged on this disposable foil-lined platter. It comes with the head and the feed also, because people like gnoshing on that here. I contented myself with the pancakes (still warm!). Really good. 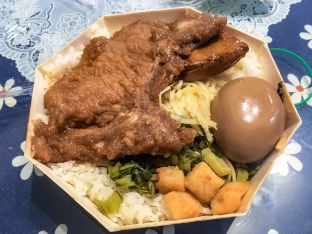 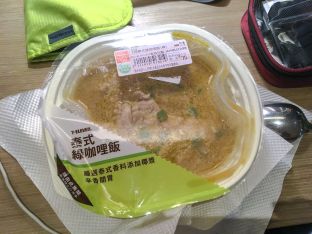 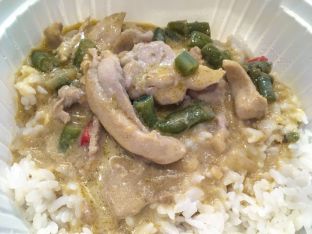 On the last day in Taichung, A-bun brought back a genuine Taiwan Railways Administration Pork Chop Rice biendang (ABOVE LEFT). They look different from the ones in the 1980s I remember, but it was nice to have. This has all the critical bits in it:

This biendang was actually a little disappointing, probably because it had been sitting in the container for hours and wasn’t fresh like the other ones. But it did taste as I remembered it, more or less. I should be able to reproduce it now.

For my final biendang, I went to the 7-11 convenience store (hugely popular in Japan and Taiwan). Unlike the sad 7-11s in the US, Taiwan and Japan have really great ones serving a variety of inexpensive prepared foods. I have been loading-up on Japanese-style shokopan sandwiches (about 75 cents), twin-pack sushi rolls (about $1.00), and yogurt drinks (30 cents). However, my cousin June mentioned that she really likes the Thai Green Curry and I picked up one to eat in my hotel room in Taipei (ABOVE MIDDLE and RIGHT). Despite my initial misgivings about its appearance (particularly since I had walked by two famous local eateries to go to 7-11 and get this), it was actually QUITE TASTY. I would totally eat it again. It cost 70NT, or just over US$2.00. I washed it down with some Coke Fiber+, a weird variety of diet Coke they have in Japan and Taiwan that has soluble fiber added to it. It tastes just like regular Diet Coke to me, and presumably it also makes ME more “regular”. Ahem.

So that’s the bien dang report from Taiwan!