GHDR Weekly Review 8.5 – Another Frustrating Week and a Crash 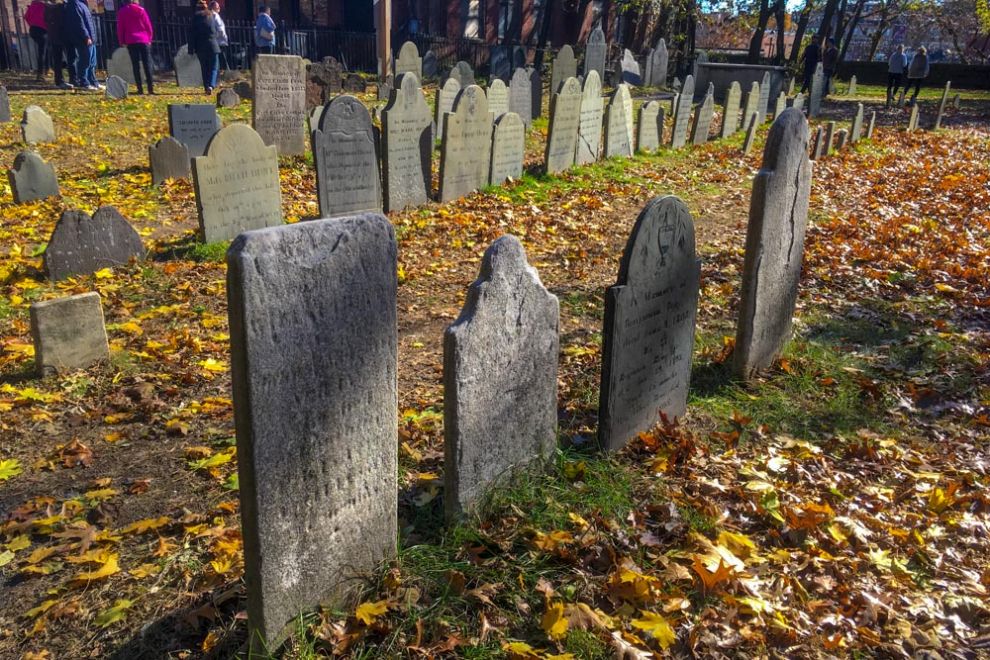 Hiya! It’s week four of using the new review format, and I think this might go pretty fast. The past week was a low productivity week due to the high number of social interactions (including voting on Tuesday) combined with a midweek drive to the North Shore of Boston for personal errands. By Friday I was completely frazzled and unable to focus. This transformed into depression that lingered into Saturday, when I decided I should take a COMPLETE BREAK from work and related productive activities. I played a lot of Destiny 2.

As I look back at the records I have for the week, I’m struck by how DISTANT those memories seem. Maybe I shouldn’t worry about them?

Let’s gather and review the data, and see how I’m doing on my goals.

NOTE: This is similar to the impressions I wrote last week. Disatisfaction. A feeling of slow progress.

Notable patterns: Again I am stuck on the Electron+React+Webpack task. I got through all my errands, but they also seemed to take up all my mental space. TUESDAY was a major commitment to run “live graphics” for the first time for our local community cable access station, which is something I’ve never done before. WEDNESDAY was a long drive to Danvers and Salem in Massachussetts, and despite it being a “me” day I always find these days difficult to recover from. I didn’t do anything else that was “good” for me, nor did I finish my key tasks for the 4TH WEEK, and this made me very depressed.

JAVASCRIPT WORK – As I mentioned above, I’m making very slow progress on my development work. On the other hand, a developer in the [virtual coworking chat room][discord] noted that three weeks on getting through Webpack configuration was not a long amount of time, and this made me feel less like I was failing at being an efficient developer. I need some long uninterrupted days to really get into it, and I need to grant myself the itme to investigate all the issues despite the desire to just CHECK IT OFF AND BE DONE with it. But I can’t: to do the work right requires really understanding how everything works, not just using the expedient-but-terrible solution.

STATIONERY and BLOG WORK – On November 10 I met with Brenda and had a very productive meeting, so this is moving forward! I also got to try out a new coffee shop, “The Local Moose”, up in Manchester where I tried a sandwich and a beverage. 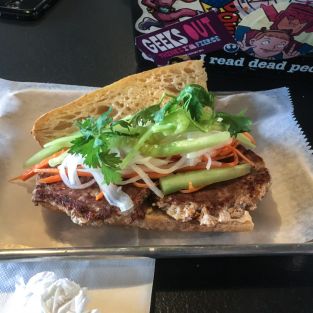 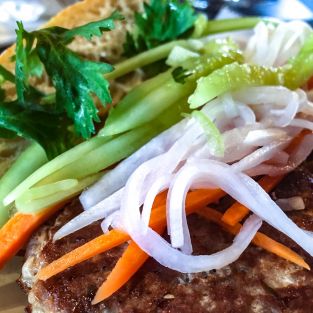 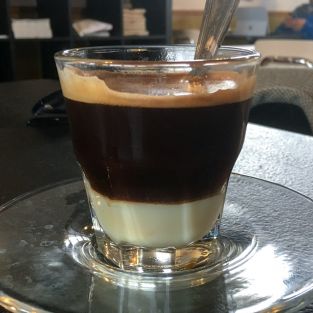 I had the Local Moose version of a Vietmanese Banh Mi, which is one of my favorite kinds of sandwiches. Normally it’s made on a light baguette, but this used a different bread and filling than I’d had before. It’s not really like a “traditional” banh mi as I’ve had before, but it was a good sandwich (ABOVE, LEFT). I did miss some ingredients like the pate, but there were nice bits of fresh cucumber with the pickled radish and carrot stripes (ABOVE, MIDDLE). I also had a “Vietnamese Espresso” which was a thick pool of condensed sweet milk at the bottom of a cup of espresso (ABOVE, RIGHT). It’s a strong and sweet coffee, and it was totally great.

Every 5 weeks I head down to Massachusetts to visit a salon in Danvers, where I get the remnants of my hair trimmed and also an eyebrow wax. I have friends that live in nearby Salem and Beverly; this time I stopped by to have lunch with my good friend Duncan. 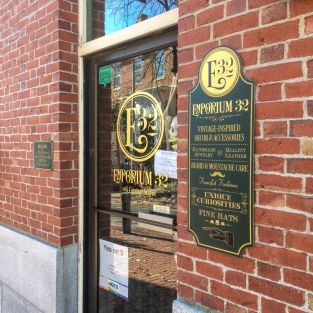 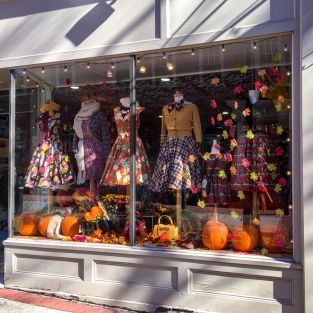 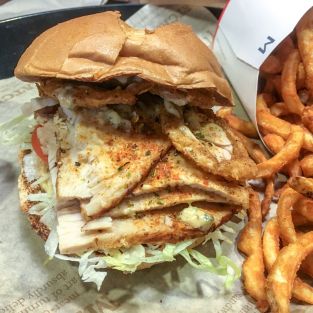 On the way to lunch we walked by a store Duncan thought I’d like that specializes in Steampunk clothing (ABOVE LEFT). Unfortuantely the store, Emporium 32 was closed for October, so I’ll have to come back and check it out. Across the alley however was another store that specialized in vintage-style clothing called Modern Millie, which I also want to visit some day since I have discovered I like this style of dressing.

On Saturday I was weak and drove to Arby’s to try their Fried Turkey Sandwich (above, right). It was disappointing, though the idea of fried turkey slices seemed great. It was tasty enough, but not mind-blowing. I also became aware of the low quality oil that Arby’s uses…slightly old-tasting? Whatever oil they use to fry, I didn’t care for it.

After voting, I volunteered at Access Nashua for their first-ever live multi-station coverage of the New Hampshire election. It was pretty exciting and super-stressful, but it was a VALUABLE EXPERIENCE in seeing the pressures of a live environment. This helps me design better tools, so I was happy (in hindsight) to have participated. I screwed up a few times, but I survived. If you are going to practice television production stuff, doing it at a local community access station might be the way to go! 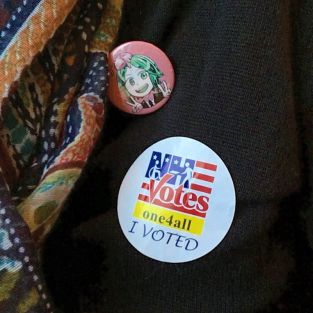 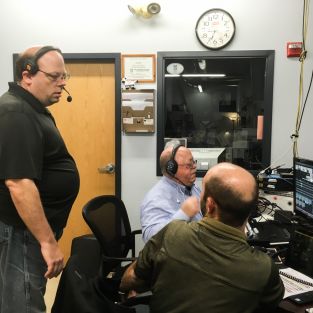 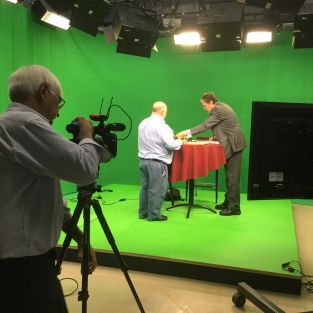 Dan, Pete, and Jim at the remote switching station handling incoming digital feeds (ABOVE, MIDDLE). I peeked into the studio (ABOVE,RIGHT); the green screen is replaced by backgrounds.hj

I’d summarize the week as starting mentally draining and ending with a crash. It doesn’t look like a lot of activity, but it was enough to cause a tremendous dip in my morale. I’d say the week went something like this:

I have a few theories about why I crashed:

Hopefully the crash is short-lived, as I caught it early enough and gave myself several days of indulgent behavior to try to recover. I AM feeling better today.

I’m tempted to give the week a higher grade because good things did happen. Every social interaction I had was very pleasant, and in those terms it was maybe an A- week! Unfortunately, the recurring pattern I see in my life is social interaction crashes my work productivity.

3A. Choose new active targets based on assessment

This week the goal is still to get through the development stuff and finalize it before December. I also have business homework with Brenda for our December 1 target of having NEW BRANDING available on Amazon store listings. One step at at time!

3B. Make sure all new targets have measureable milestone

This review didn’t take too long to do. I feel I could probably reduce the amount of analysys and look at just the main goals. I’ll try making an ammended version for this coming week.