I received a notice from Amazon regarding the ETP StickyPads I sell on their marketplace. Someone complained that the goods I was selling were knockoffs of another brand, and Amazon has de-listed the ETP Stickypads until I appeal the process. The instructions to appeal say to look in a certain menu on the Amazon site, where an appeal button should be. There is no such button to click, so I am replying to the email hoping that it gets to someone before they destroy all the stock I just sent in.

I’m writing this blog post as part of the proof that I am the designer and manufacturer of the Emergent Task Planner StickyPad. Plus it is kind of an interesting experience to be accused by an angry consumer that I’m knocking off my own product.

Why did I get an “Inauthentic Goods” claim against my OWN PRODUCT?

I am trying to be calm about this, because there was a change in packaging could give rise to the impression that they are fake, especially for people who have used the previous version but didn’t notice particular details. Here’s the fragment of the complaint that I saw:

..here are 3 issues with these pads. The first is they are a knock off brand, with both poor adhesive and a terrible writi…

It is possible that the quality of the adhesive has varied in this particular batch; on the other hand, I have never really liked it. I’ve asked my commercial printer whether there is stickier adhesive available, but his supplier says no.

What’s new in the last batch is the new cover sheet, which has a mistake: the margins on the cover sheet are noticeably narrower than they are on the actual printed pad. I didn’t have any pad samples to compare it too since I’d shipped every one to the Amazon warehouse; it’s only now that I see how jarring the difference is. I could see how that would lead to disappointment on the recipient’s behalf. 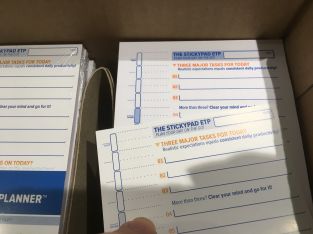 Here’s a view of the margins. On the right side, the actual pad is at the top, and the cover sheet “illustration” of the pad is on the bottom. You can see a noticeable difference. 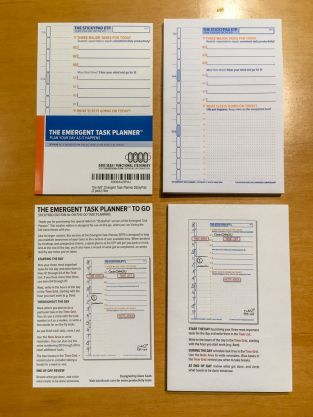 Here’s a view of the new package. The old package didn’t have a cover sheet, and just showed the front of the pad through the shrinkwrap. The backside of the package had an instruction card (lower left) and was placed on the back. The back of the pad itself had a smaller instruction diagram, and was limited in its printable area.

I’m assembling the various “proofs of not being counterfeit” by including invoices and other photos. I’m also pointing out identity-corroborating details like my registered email address, references to the ETP on this website, and anything else I can think of.

I’m also thinking of dropping the ETP 4X6 StickyPad because I have never liked the margin limit. I might scale it up to 5X7; there is really no reason that it’s 4X6 inches (that I can remember). The 4X6 has always felt a little cramped to me. As far as adhesive quality goes, this means trying to source another manufacturer, so I’ve reached out to my printer to see if he can find one.

I’ll also have to get around to scheduling a studio shoot of the new package design to update the Amazon listing photos, and write a note about the margin difference in the description.

Hopefully that will be enough to get by this. In the meantime, I’m hoping for the best. It would suck to lose all that money that goes into manufacturing even a small run of goods. It’s kind of reassuring that Amazon is watching out for counterfeits and taking immediate action, though this has been inconvenient for me.