Resolutions Review #07: Doubling Down on Conviction

It’s time for another Groundhog Day Resolutions Review, the yearly strategic goal system that I have been using for the past 10 years. It’s a lot of “New Year Resolutions”, except I start them on February 2nd because I’m in not shape to make ANY PROMISES on January 1. I then review my progress every month on March 3, April 4, May 5; you see the pattern! It ends on 12/12, just before the holiday madness begins.

In brief, this past month has been a continuation of the depression from July, but I think my new working theory about personal connection relative to the pursuit of my entrepreneurial ambitions may be the solution I’m looking for. With that change of mindset, a different set of actions become apparent.

This month I was feeling unmotivated and sluggish, similar to last month when I was even more depressed. I felt disconnected from people, and also disconnected from my strategic goals for the year. In August I had prescribed two important directives that I thought might help kick me out of my rut:

The first directive addresses the lost ability/desire to write publicly, which is bad because my public writing is the vessel for new connections with people. The second directive draws on the realization that it’s the unusual things about me that will form the basis of an interesting relationship, not surface interests. I aspire to be a little more weird, outwardly creative, and a positive-minded friendly beacon of possibility.

So what happened in August? Mostly I felt trapped by never-ending projects and infinite lists of chores. It has been very difficult to self-motivate while under this perceived parade of doom, and I only managed an average of around 10 hours of billable work per week. While this is actually an acceptable pace—my expenses are fairly low–it was hard to shake the guilty feeling that stemmed from believing “other people” were working far longer and getting more done than I.By comparison, I felt lazy and incompetent, though on general principle I try not put myself down by comparing my life to the imagined life of other people who seem more successful. I don’t think there’s much to be gained from such comparisons, though the temptation to look for clues on “doing life right” in the lives of one’s peers is difficult to ignore.

Today I spent about 45 minutes reviewing everything I could remember/unearth about last month’s activities. The one I remembered off the top of my head was that “I did a lot of boring video server work and didn’t get much done”. However, on review of what I actually did in detail, it’s pretty clear that I’ve done a lot of things. I did exceed my minimum billable hours for the month by a good 25%, which is great for finances. The quality of the work I did was also, in hindsight, quite necessary for me to continue to work, and I made some new ways to document the code to make it even easier. I tried a new text editor too, looking for ways to improve my workflow. While the project is still not done, I can see now that progress has been made. It just is that it’s not DONE, and this feels like a lack of accomplishment because I seem to crave completion over process.

For the rest of the time? I bought cool stuff, started cooking again, increased my cardiovascular gym training, lost 10 pounds on a new diet that seems sustainable for the next few months, evaluated new software and tools, made several household quality-of-life improvements, and had deeply meaningful conversation with friends. I think I’m living this part of my life as I want; it’s just the feeling that nothing major is getting done or completing that has put me into this funk. There’s also the lingering issue of not having other people to work with on my projects, and not knowing enough people locally who have the same compulsion to learn, improve, build, and share. I’m lucky to have the Virtual Coworking Chat Room on Discord, which has become a small but reliable source of conversation around productivity, entrepreneurial ambitions, and shared life experiences. It’s like we are all actually part of a cool little company supporting each other in our work, though none of the work is shared at all.

So there are two conflicting versions of past reality that I see:

These are lies my brain are telling me. In truth, quite a lot got done in both areas, and there’s no reason to feel guilty or judged; that’s coming from inside of me, and it’s not a productive mode of thinking. Sure, people could come up with plenty of REASONS to judge me, but I seem less susceptible to that these days. This resilience has been bolstered by findings from my ongoing finger nail polish experiment, in which I’m testing personal identity issues by trying out things that are outside my comfort zone. It’s not traditionally masculine thing to wear nail polish, so I was really nervous about what people might say. Here’s the current iteration, up to three fingers and two colors: 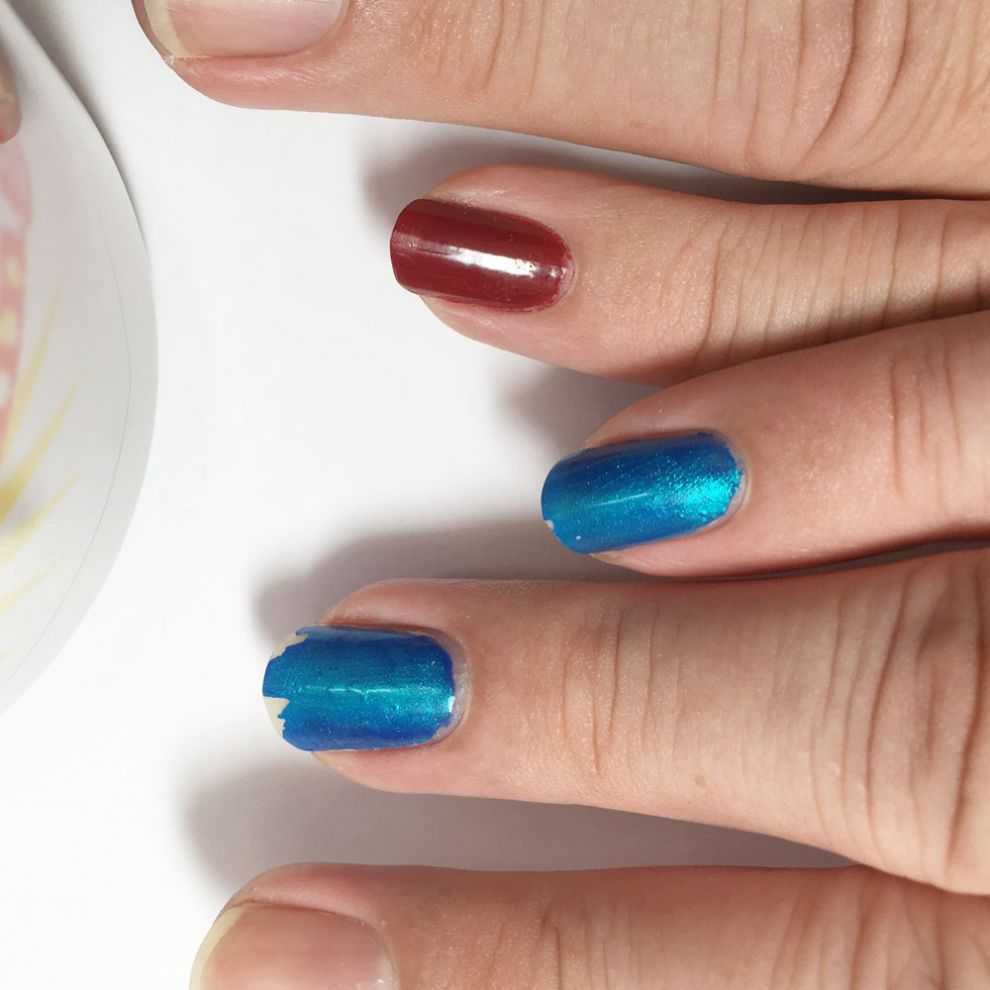 So far though, only one friend asked about it; everyone else just seems to take it in stride. I’m sure they SEE it, but the lack of reaction and the feared rejection/judgement has not yet come to pass. This has me thinking that “Hey, I can get away with a lot more than I thought! And I like nail polish! It’s a whole new world of color and technique”. I even like the feeling of trying to adorn myself with some marker of “oddness”; after all, it’s the odd creative people that I most like hanging out with. Perhaps people who like my nail polish are more likely to be compatible souls?

Now, let me revisit last month’s directives again. They were:

As I said above, these directives were designed to reconnect myself with people, which I thought was the issue. That lack of connection was painful.

Today, I have changed my mind and have a NEW WORKING THEORY: **I can’t count on finding people as a sustaining resource in my current phase of projects. This will take longer and require a lot of outreach. I’ve been hoping that something might happen, but this is wishful thinking and not something to build a plan on. I think it IS essential to have this kind of quality personal relationship (and I do have several), but I don’t this it’s necessary to have it as part of my medium-term entrepreneural goals.

That said, I will remain open to meeting compatible people that can engage with me on projects. I’m no longer counting on it, though. Instead I am promoting these three character traits from their previously secondary role:

So I’m cutting people out of the equation for now. It would be great to have people working directly with me on my project work, but as I said it’s just not feasible at the moment. It’s more important, I think, to rely on myself and do those things that have value. I can still hang out with people and have interesting conversations that recharge my batteries. I just don’t expect people to understand what I’m trying to do anymore, and have decided that this is probably the way it should be. That’s my working theory, anyway!

For my immediate goals, I need to get out from under that feeling that these projects will never end, and that I’m blocked from expressing myself.

To summarize, here’s my chain of thinking:

Now, my specific actions are as follows:

So that’s the plan! Thanks for following along, and I hope your Groundhog Day Resolutions are going well. If you’d like to see the complete 3.5 hour GHDR breakdown, check the video below.