Working on these goals every day, while somewhat satisfying to date, has also been mentally exhausting. For the weekend of March 5 and 6, I took a break from direct action and instead tried some oblique approaches! On Saturday, I deliberately went for my cooking for others result, and then on Sunday I visited a psychic fair fundraiser in downtown Nashua to see what that was all about. It was a refreshing break, providing some interesting moments of reflection that I wouldn’t ordinarily have had.

On Saturday, my friends Sid and Sara came over to try out the Rendang Curry I’ve been making from a Primataste kit. This was the fourth time I’d made it, and I got it exactly right this time around. The curry was met with approval!

Afterwards, we talked about video games (Rise of the Tomb Raider, Firewatch), watched videos of surprising-looking singers (Jordan Smith, Christopher Cross), and caught up on various goings-on with our creative lives. Hopefully Sid and I will be able to catch up on our podcasting schedule, where we usually discuss such things. I may start doing a solo podcast just to see what it’s like, though I’m not sure what it would be about.

It was great to connect with friends over food. I probably spend way too much time by myself, though the Internet chats with my online friends have helped a lot.

I used to be on the board of directors for City Arts Nashua when I was learning about the Arts in my home town, and had to make the difficult choice of focusing on my own more nerd-oriented activities. I’m still quite fond of the people who run the organization, and this weekend was the CityArts Nashua 6th Annual Psychic Fair Fundraiser; I had never been to this event even when on the board, and wanted to check it out. I like tarot cards, so I figured I might find a nice box or something. I wasn’t planning on getting a reading, but since the money helps fund arts projects I figured it would be a nice thing to do. While I personally am more on the SCIENCE side of things, I do like to experience other forms of inquiry that have long traditions of divination; they are systems of understanding that, even if you don’t personally believe in them or accept their claims, can often be very useful for reflection. Insight can come from anywhere and everywhere, so I try not to be a jerk to the people providing the service by butting-in with doubts. They seem to be nice people, after all, and I am willingly giving them my money to help support this charity. 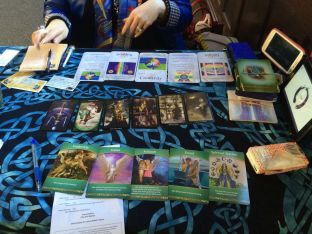 That settled, I perused the offerings. I was intrigued by a person who appeared to be using computer equipment to “read auras”, so I signed up for that. I was also intrigued by one of the readers who mentioned “Steampunk” specifically as one of the sources she used, and that was enough for me. As the aura reader was busy, I started with her reading. In such situations I try to be open and communicative rather than let the dour attitude of the skeptic interfere, which I was somewhat able to do I think.

At the beginning of the 15-min session, I told the reader that I felt I was in a “transition” as I moved to take on a lot of different goals, and was interested in whatever the cards had to say on the matter. She pondered this as she manipulated the deck, mouth firmly clenched as she pondered this and listened to what was guiding her. I drew some cards from the Steampunk deck, then more from a couple other decks.

Some of the unprompted things that came out:

All in all it was a pretty interesting session, and I was reminded of some things to try out in the coming weeks with regards to relaxing my mind, thinking of what I can offer, and perhaps further expressing aspects of my creativity that I may still be holding in. 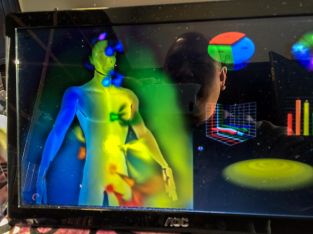 The aura reading followed next, and technically the setup was a PC running something called Auracloud, operated by the aura reader. The software itself was quite interesting, explained to me as reading the energy from my palm to measure the activity of my chakras, and rendering them using a 3D graphical visualization with realtime updates. It was pretty slickly done, a nice bit of software to augment the experience.

As the graphics rotated and swirled, the aura reader explained what each plume of color meant. Of my seven chakras, the software reported that my third one was kickin’ ass and spinning powerfully. I think this was the one associated with willpower and inner strength. My 4th chakra, the “heart” one, was the next strongest one. The rest kind of just flopped around and surged up and down.

At the very end my average aura color and intensity was rendered by the software. The aura reader was a bit surprised by the result, which had come out as being “joyful and optimistic”; I wondered if perhaps I had been coming across as a bit skeptical in the reading, or maybe very seriously. A lot of the time readers think I’m an analytical and logical person, but at the heart of things I’m generally pretty optimistic and cheery. See? 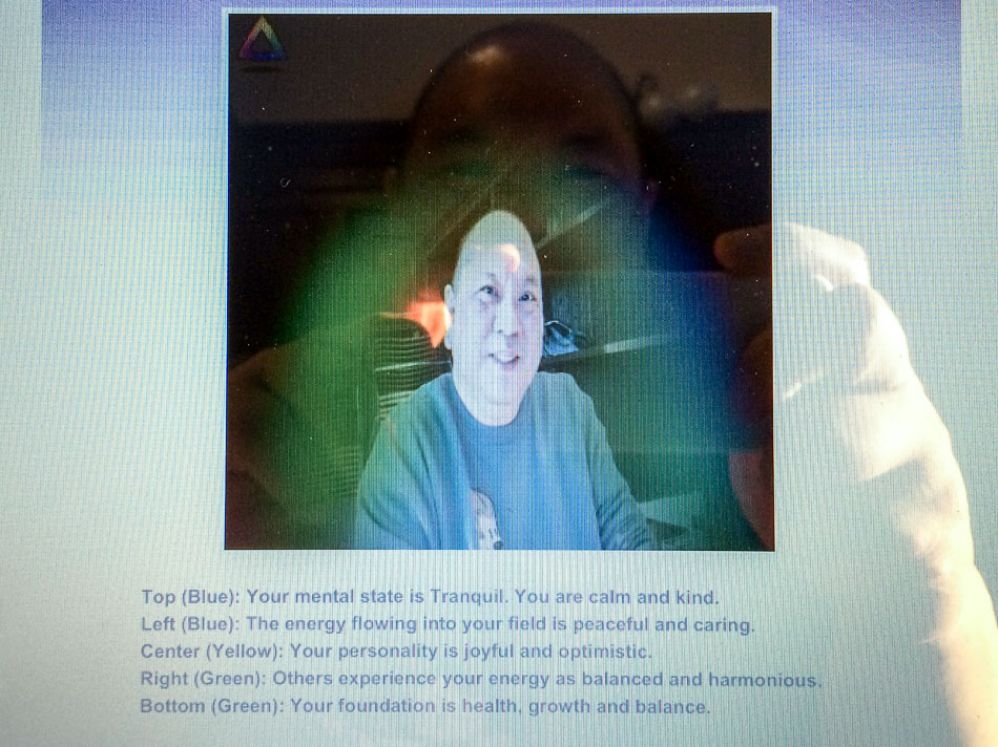 When I was asked if I had any questions, I didn’t really except for my curiosity about how the aura reader got into this. He explained that he was a software developer before, and when he had met his wife (and here he gestured to the tarot reader that I had just seen!) he had gotten pulled into the world and found it a fascinating way to engage with all kinds of people, so here he was! I thought that was an endearing story, and thought it was an odd coincidence that I picked two reader out of the entire crowd who were close to each other. CUE MYSTERIOUS MUSIC!

This was a weekend where I actually let myself not work so much on the my goals, but instead allowed my mind to float around them. I think this will have to be a regular weekend ritual.

13 points followed by another 17 points for a total of 30. Not bad. Not much else got done over the weekend other than mopping the floor and doing dishes, but I do feel rested. Here’s to a productive coming week!