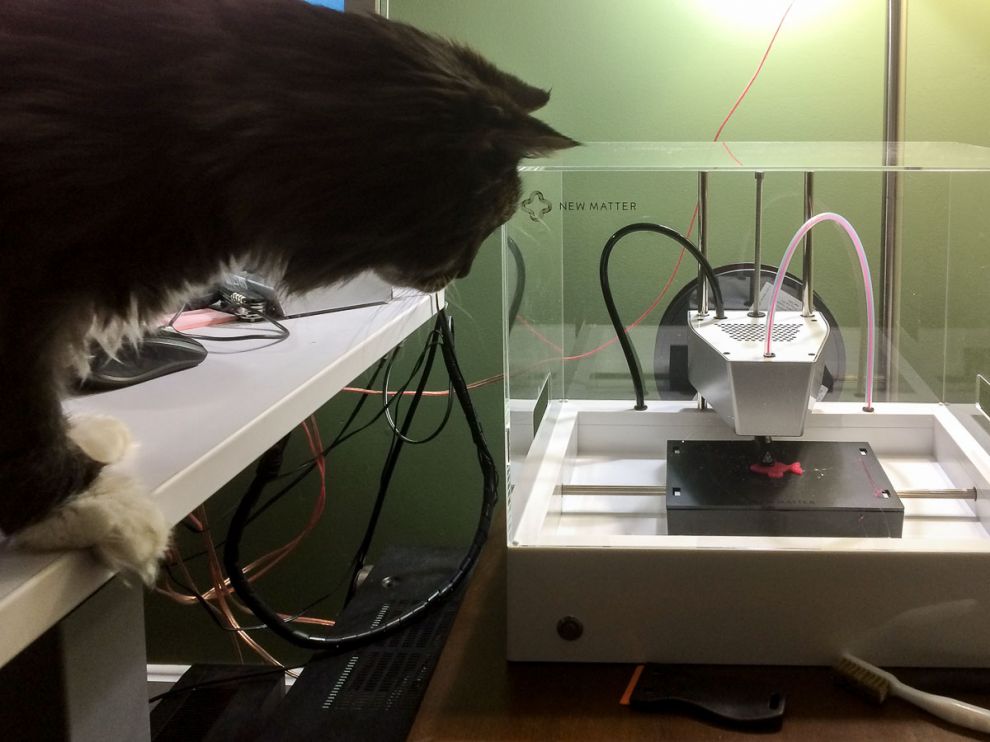 Way back in June 2014 I backed the MOD-t on indiegogo. Billed as a “3D printer for everyone” and priced at $149+shipping for the first 500 backers, what put me at ease despite the cheap price was the association with well-regarded industrial design firm Frog. I jumped on it, and ironically I received my printer just last week after everyone else due to a snafu with their backer list (I am having the worse luck with shipping this year). This was a blessing in disguise, though, given the number of problems New Matter has had with the hardware’s firmware and flaky wireless support. I’m just getting my hardware after some of the early issues have been solved, and with luck they’ll all be cleared up by next year. When one crowdfunds a product, you really are buying into an early investment, so one should expect problems and have the patience to work through them. This review will go over some of that experience. 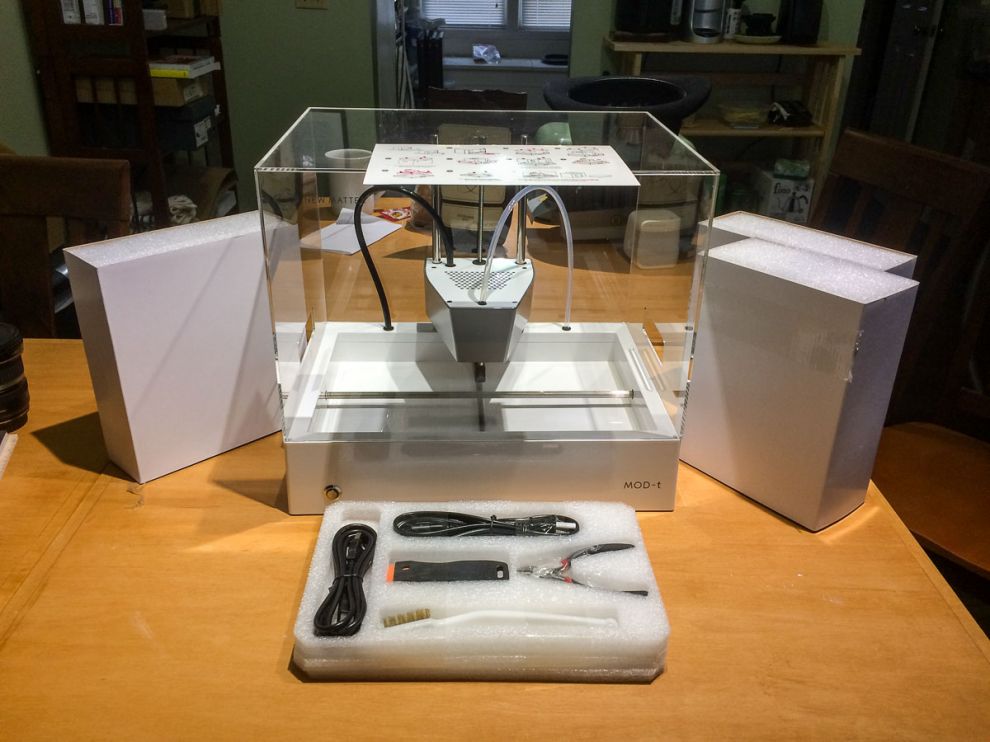 One thing I can say is the MOD-t is a gorgeous design, and the packaging itself was well thought-out except perhaps for the “pull out” handle of the tray which isn’t reinforced and tears immediately. Given the amount of expense that must have gone into the packaging, it’s a slight irritation. 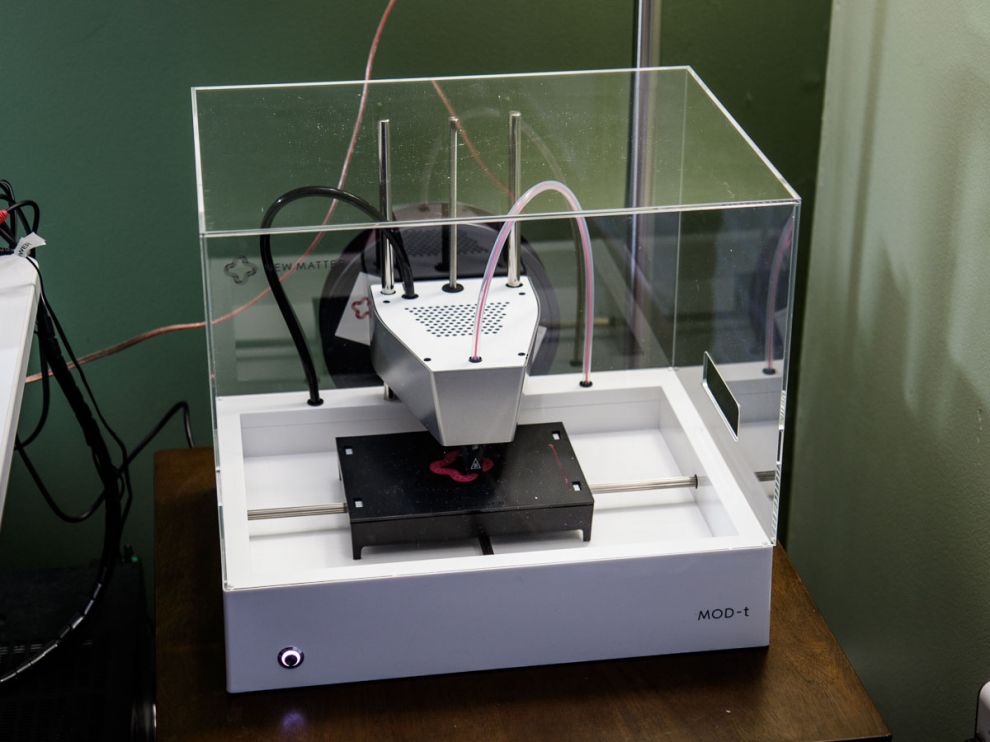 It’s a pretty compact unit, with a printing area of 4x5x6 inches, which is big enough for the kind of small experiments I want to do. I really have no preconceived plans on what to do with 3D printing other than I want to give it a try; at $149 it was cheap enough. Unfortunately, since the campaign concluded New Matter has been forced to raise the price to $399 from their earlier $199 target, and at $399 there are other options now to consider. 16 months ago, though, the MOD-t was a very attractive price.

The home 3D Printing industry in 2010 reminds me of the Microcomputer Industry in 1980. In the grand scheme of things, the MOD-t is somewhat analogous the VIC-20 (released 1980), a cheap all-in-one alternative to the pricier Apple II or TRS-80 (both released in 1977). This industry is only going to get bigger, so I want to gain familiarity with the tools now.

The analogy diverges with the immediate focus on serving a consumer. In this day of apps and ubiquitous digital commerce, the MOD-t is designed from the ground-up to connect to an online marketplace through wireless Internet. In fact, the way one uses the MOD-t to print is much different than what long-time computer users are used to in an output peripheral. Rather than plug-in the USB cable and print from your main computer as you would with a regular printer, you go to the New Matter website and command the printer from there.

Here is where New Matter’s software design and documentation team have dropped the ball. Unpacking and setting-up the MOD-t went very well, and I was impressed right up to the point where I had to run the setup program. It is an ambiguous and buggy experience due to I think a lack of understanding by the technical writing team of how their product works.

There’s two things you need to know right up front: there are two ways to print from the MOD-t. The first way is through the “Printer Utility”, which is what you run on the first installation of the printer. The Printer Utility also is the program you use for first-time setup of the MOD-t, which consists of connecting it to your wireless network (there is no Ethernet port). The second way to print, available once you’ve set up the MOD-t, is to use the website and send print jobs to it. This is actually the INTENDED way you will print, selecting pre-designed objects from the New Matter Design store, then queuing them to your printer through the magic of the internet.

It sounds nice, once you understand this is the intention. It is also backwards from the way many users have experienced installing a printer-like device. It would have been very helpful to have this somewhere prominently IN THE INSTALLER PROGRAM and SETUP INSTRUCTIONS. All would be forgiven if the WiFi connection procedure was flawless, but it is not. Many people seemed to have had the same problem as I: it’s impossible to connect the MOD-t to a wireless network because none are listed. It turns out that to see the wireless networks, you need to be using a computer that is already connected to one, a requirement that was not listed anywhere I saw, or not called out where I would easily see it. As I had plugged the MOD-t into my main PC workstation on a wired connection, no networks were visible. When I typed in the network, I always got a CONNECTION FAILED error. I could not complete the installation at all. But I am getting ahead of myself…here’s my installation notes!

It turns out that my MOD-t was functioning correctly, but the installer software (or rather, the “Printer Utility” that is installed) is a bit stupid about how it displays status.

I had expected the setup to tell me what the MOD-t’s WiFi module itself was able to see in terms of available networks through the USB cable, but my guess is that it doesn’t work that way. Instead, I think the engineers use the host computer to get the network list (a shortcut), then sending the network credentials you entered to the MOD-t via the USB cable. It then waits for the MOD-t to say it connected successfully.

This fails in two ways:

Once I got that figured out, I unplugged the USB cable and was greeted with a change of printer status from “idle” to “disconnected”. WHAT THE HELL? I thought I just had connected it successfully. After browsing support, it turns out that the status indicator in the Printer Utility is for the USB cable, not Wifi we’d just set up. The status could be labeled “USB CONNECTION”. An easy fix for the installer team that would save thousands of hours of confusion in the user base, assuming that they fix the WiFi handshake too.

At this point, I made a test print using Printer Utility, and it worked! As I watched the entire process, I realized that the MOD-t print cycle has several stages (I might have them out of order):

Each of these steps takes a while. For someone who has never run a 3D print job before, it would have been nice to see these steps listed out. A great opportunity for some slick UI design! Sadly, the status UI design is rather poor in this regard. Here’s what it looks like on the New Matter website while printing is happening: 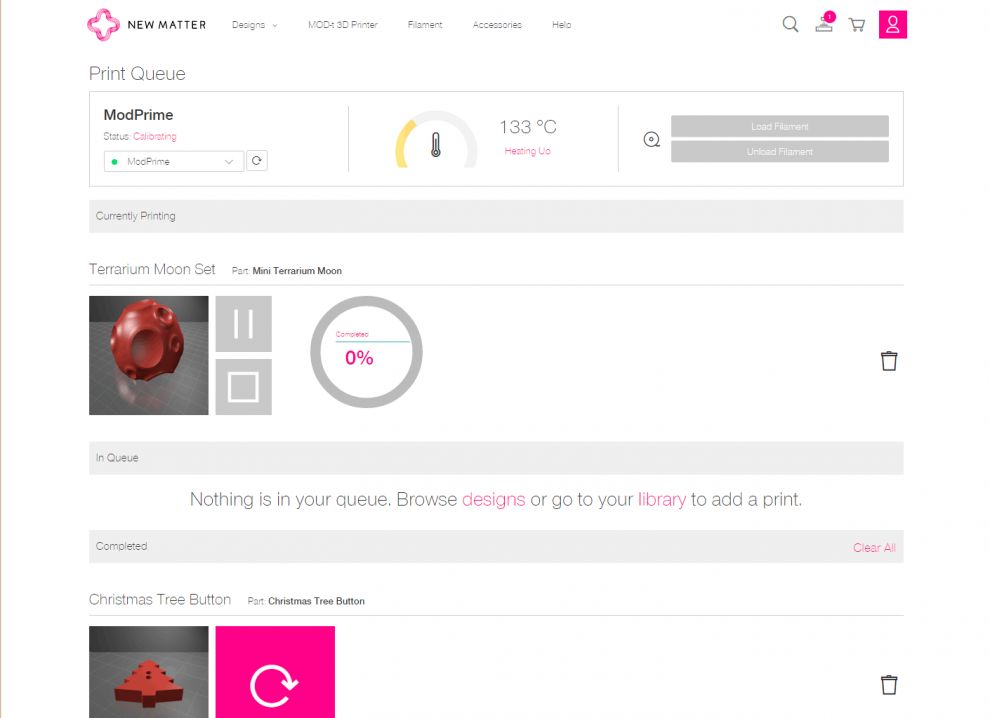 On first glance, the UI looks like a clean design that appreciates white space, though this may just be due to its use of a responsive CSS framework. The design isn’t very precise in its visual hierarchy however.

Overall, this could be tightened up to make a better first-time experience. There’s opportunities to expand the status to show each step that’s happening in the printer, educating as it informs. Frankly, though, once you figure it out it’s unlikely to be a problem; I just get cranky about visual hierarchy and detest ambiguity in labeling.

After all that complaining, let me really emphasize that the web-based printing interface is technically very cool. Once I got through the bad WiFi setup process and figured out what was supposed to happen with a 3D print, it’s been a very enjoyable process. I hope that we see the WiFi setup issues addressed and helpful prompting added to the setup text to clarify what’s happening. I would be gratified and amazed, actually…installation and setup doesn’t seem to get a lot of love from companies, but I had higher hopes for a startup mentored by an industrial design firm like Frog for a consumer-facing product like the MOD-t.

But I digress! Look! My first test print in-progress! 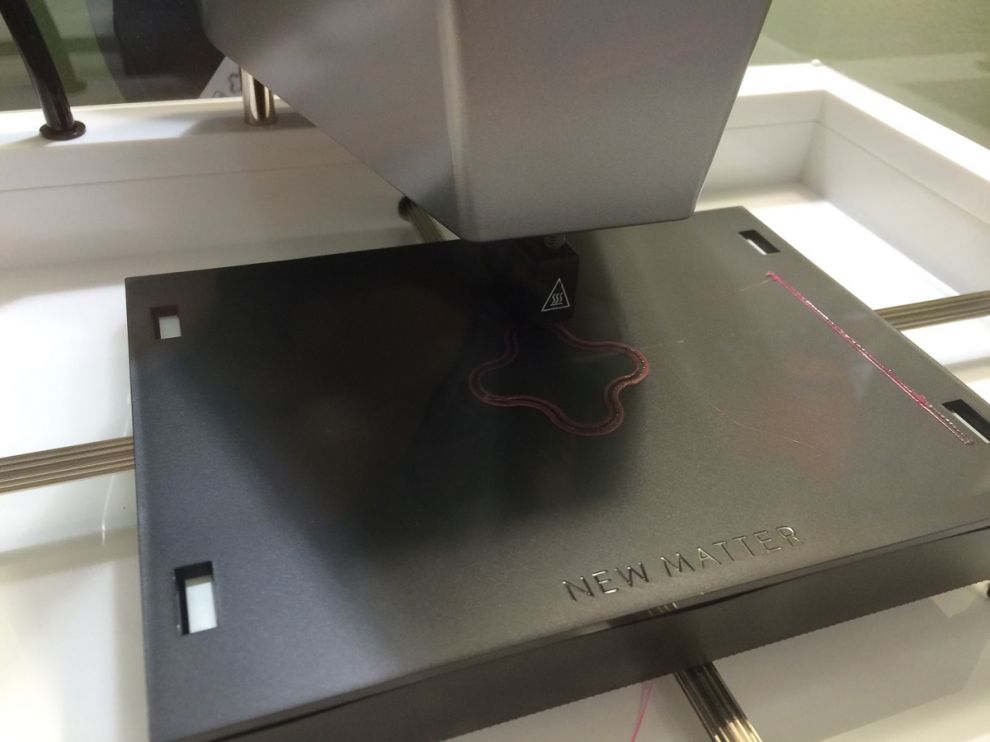 This is the New Matter logo being printed, and while that was going on I poked around the New Matter site docs. There’s some short and cheery how-to videos on YouTube. They’re fun and helpful, and I’m glad that I watched the one on how to get the print off the print bed. Bend, twist, and pop! I probably should have watched them before unboxing, but I didn’t know they existed until after all the troubleshooting searching I’d done.

The plastic was surprisingly durable and hard, and I was pretty pleased. As soon as I set it down the cat swatted it off the table and I have not seen it since.

The next piece I printed was through the New Matter Store, which is stocked with free designs. I selected a small flat Christmas tree button and queued it, but I had renamed my MOD-t when I set it up the second time on my laptop, so I had to fiddle with that. The New Matter website seems a bit flaky with account password setup the first time through too, taking some time to recognize credentials, so being patient sometimes seems to help. But after that, BEHOLD! 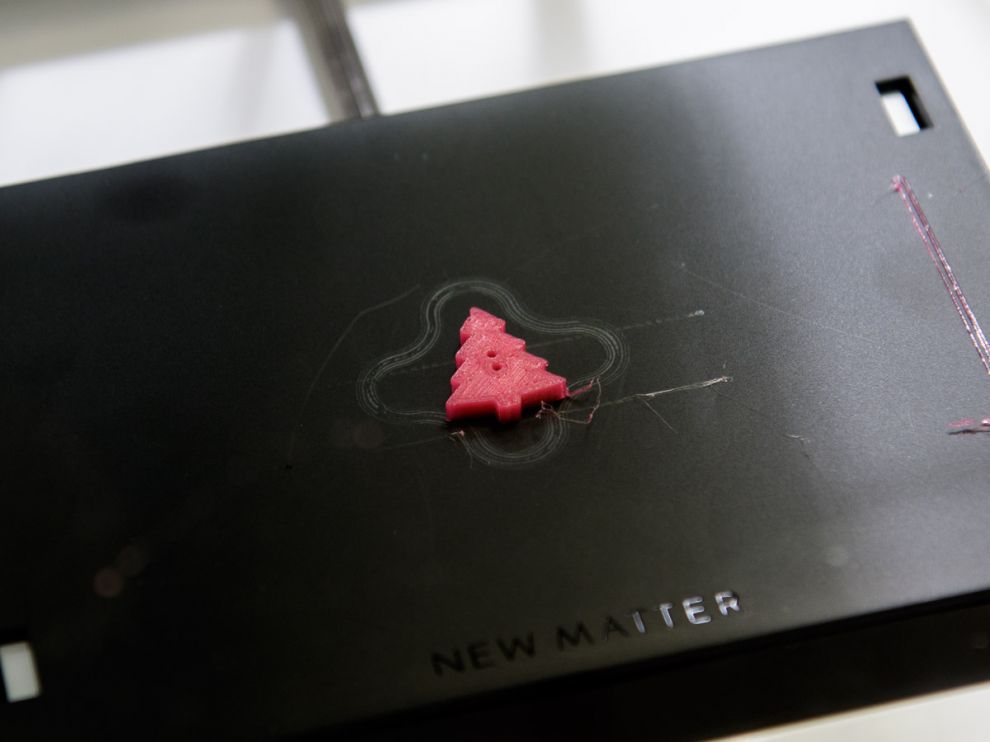 I like it! I need to get some different colors now! A kilogram of filament seems to cost between US$25-$35, and they’re available in some odd materials like “wood” and “silver-like”.

Despite all the setup problems (which had gotten me pretty mad initially, thinking I had bought a complete piece of junk), I’m going to say the MOD-t seems to be on its way to becoming a consumer-oriented fun product to use. The engineering is deceptively simple and kind of ingenious from what I can tell. The price isn’t as great at $399 as it was at the original $199 price point New Matter was targeting, and I was lucky to get mine at $149+shipping ($40). If they get these setup issues cleaned up, and also smooth out the rough edges of the technical writing and UI design, they have the beginnings of something cool. The printer itself looks great, and I’m looking forward to their next iteration. For now, though, this printer is a great introduction for me into 3D printing without a lot of messing around with assembling kits and calibrating things. The real challenge for me will be in finding the software workflow to create my own items; this is not something included in the MOD-t package, but it’s possible to print files you’ve created yourself.

What really has me more excited is the marketplace they’re building. My issues with the Print Queue design aside, it seems like a fun thing to do. It might be fun to sell little things in the store too. I also like that New Matter is using non-proprietary filament (the plastic it prints), so you can buy it from anywhere.

Still, I might wait a bit until they get their firmware and WiFi setup issues taken care of. At the time of this writing, there’s reports of MOD-t prints going nuts, driving the high-temperature heated filament extruder into the print bed and melting it; I’m concerned that there is a fire hazard so I have been printing only when I’m in the house.

UPDATE: I’ve printed a few things once getting the WiFi setup straightened out,