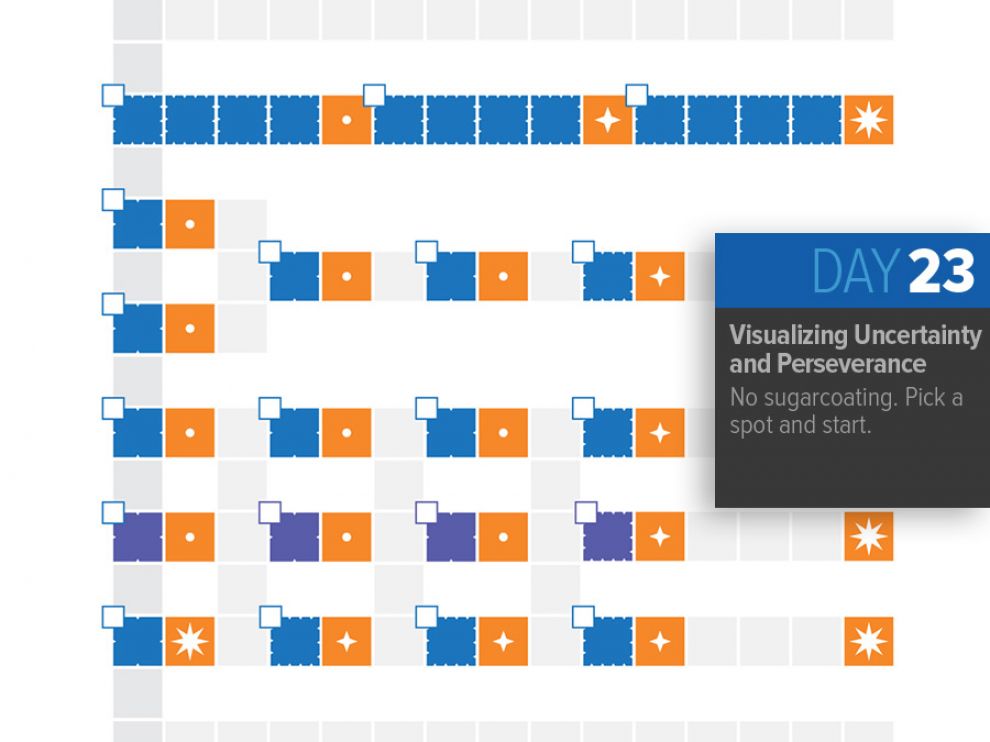 This weekend I have been feeling extremely low on motivational energy. Possibly it’s because of the shorter days and me waking up later; this week I am going to switch to a “waking with the sun” schedule to maximize daylight exposure. But I suspect the problem, if there is one, is related to my ongoing struggle dealing with the tedium of doing mundane solitary tasks.

I spent a few hours at Starbucks thinking about how to represent the problem; this experimental “visualizing perseverance and uncertainty” form is the result.

The Nature of Uncertainty and Creativity

When I am talking about the “tedium of mundane solitary tasks”, I am describing an extreme inertia that is difficult for me to overcome. A large part of the inertia comes from the feeling that a lot of this work is busywork that changes nothing permanently, or unduly wastes time because of poor design and documentation. However, I have also recently come to believe that this is the nature of the world most of the time, and I have to be able to deal with it. Making good work is a grind. Life is a grind, particularly when you are going it alone much of the time. I don’t mean to sound depressing, but it is the salient fact of my existence at this moment.

So I might as well accept it rather than fight it. This doesn’t change my understanding of how creative excellence is achieved through perseverance in the face of unknowable future outcomes. Accepting the grind as a fact of life can either be a force of dissuasion, or it can be a challenge to gear-up and take it on. I would say I’ve been feeling mostly dissuaded recently, but I’m feeling the urge to fight it once more.

The interesting thing about uncertainty is that certainty is right behind it. By dealing with uncertainty and trusting one’s self to handle the unexpected and learn through multiple failures over time, one naturally gains knowledge that leads to certainty. It requires one to take responsibility for interpreting not only the unseen terrain ahead, but also to not take your tools at face value. It also means not taking the advice and reference material you are given at face value, because it is likely to be incomplete or even wrong given the upcoming experiential context that you alone will face.

There’s two ways to think about this challenge that I’ve come up with. One is you can think of it as PLAY, with no repercussions, limits, or judgements that will have lasting consequence. I’m not so good at that, as I think of challenges in terms of TEST OF COMPETENCE. It’s an attitude I am trying to deprogram myself of when it comes to pure creative, non-critical work.

The first thought I had was that perhaps I could visualize uncertainty as a series of time chunks spent, possibly resulting in an award. It’s like shaking trees in the game Animal Crossing, which produces some kind of prize every once in a while although most of the time nothing happens. I just started making boxes to see where they would go: 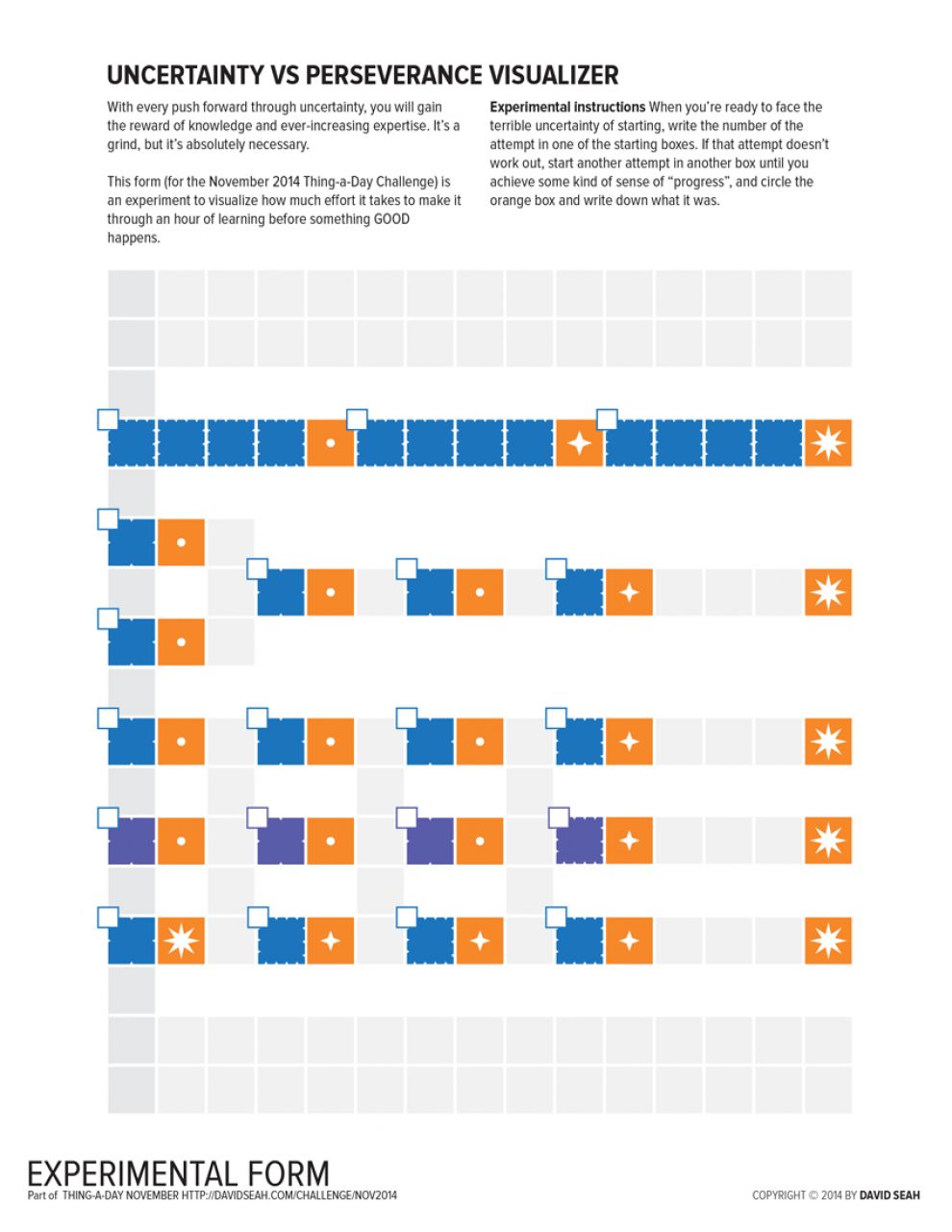 I’m not quite sure what this means. Roughly, I’m thinking that the first column represents an array of choices for the first 15 minutes of a tough endeavor that you’re not sure how to start. The top-most row is the “start and chip away over the course of a day” approach. The bottom approaches are like 15-minute starts and false starts, sometimes yielding reward and sometimes not. This is really more of a sketch than a final form with a specific purpose, but I thought I’d share it anyway.

As I pushed elements around, I got the feeling that this would work better as a kind of Minesweeper interactive experience, or perhaps as a kind of board game. I’ll have to think of it some more. The challenge would be to make it into a useful tool for cracking those big hairy problems.

I’m going to print it out and try keeping notes on it to see what else occurs to me. If you’d like to download the form, here it is:

As this is an experimental form, I wouldn’t look too deeply into how it works or have expectations about it actually solving a problem. I’m sharing it as part of the design conversation. Let me know in the comments what you think!