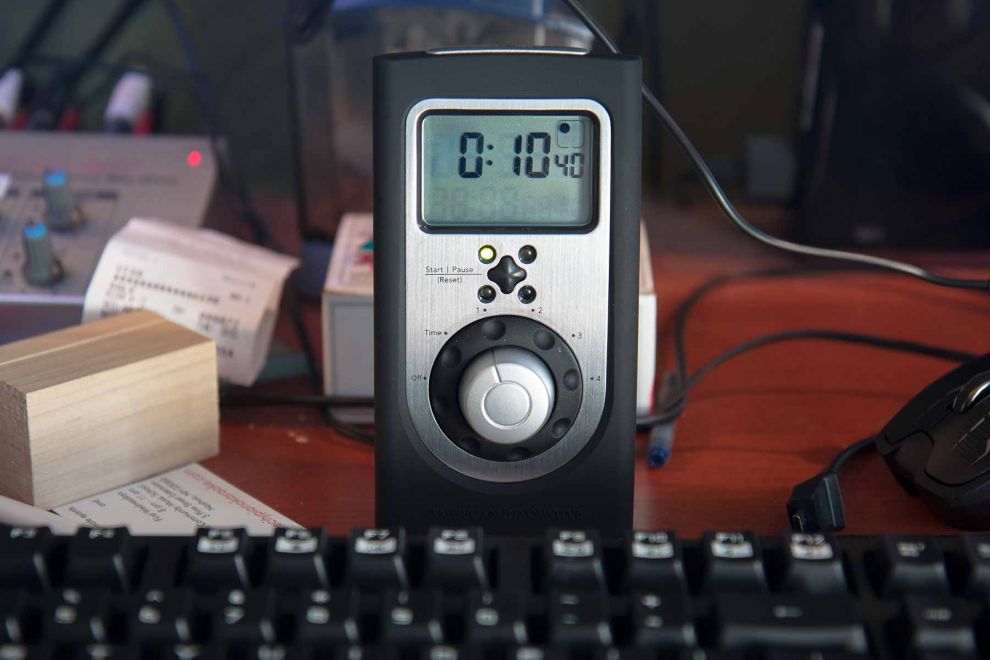 Currently, all of my time tracking is done in increments of 15 minutes. When I am actively pacing myself, I like to use an “interval timer” that goes off every 15 minutes. While there are some good iOS apps that do this—Chette Ayson tweeted me this app, which I really like—I find timers on a general computing device to be inconvenient. The timer window gets covered up by other windows, or gets put into the background, and it’s sharing the same mental workspace with my other work. I like my timers to be physical and present in the real world.

There are fancy interval timers like the Gym Boss and the Timex Ironman watches—I just like things with number displays in general—for everyday use I find it more convenient to use a kitchen timer. They’re usually easy to “set and forget” until time’s up!

In an effort to de-clutter my desk, however, I’ve started using multi-timers, which combine 2 or more separate timers into a single device. This is handy when I’m doing regular task timing to maintain pace, but also have to remember upcoming meetings or appointments. I also sometimes use Google Calendar SMS alerts, but they are unreliable in my home office due to poor cell phone coverage. Also, I often don’t know where my cell phone is, since I tend not to use it. It’s a Motorola RAZR 3 from 2004, but you know what? I’m not paying $100/month either!

Out with the Old

The new timer is replacing the well-regarded OXO Good Grips Timer. It is notable for several excellent design features:

For me, however, the OXO falls short in a few areas:

My OXO died after many years of service on my desk. From what I gather on the Amazon.com reviews on it, the OXO might be susceptible to moisture; mine died after I used it outside on a humid day frying chicken on an outdoor burner, and then sat outside throughout the evening. After that, it starting acting funny and I gave up on it. Which brings me to the NEW timer!

In with the New

I wanted to try something new, just for the heck of it. After searching around, I came across American Innovative’s “Chef Quad-Timer Professional”, which seemed well-liked by many people. It had also been designed by a company that apparently thought it could make an IDEAL kitchen timer, so that had me intrigued.

There were three general complaints about it despite its 4+ star rating:

However, these negative reviews were by far in the minority, and there were positive reviews for the usability of the spinning ring and battery life. The one usability issue that was real was the 5-minute increment limit. Fortunately for me, I am planning on using this largely for 15-minute timing increments and appointment reminders, so this is not an issue for me.

I just got mine in, and it’s a small solid-feeling unit that stands tall on my desk. You can hold it in one hand sort of like a thickish iPhone and use the other hand to spin the dials and press buttons. It has four LEDs which correspond to the layout of a typical 4-burner stove, and the LCD display can show two timers counting-down at a time. The main timer value is larger at the top, and is selected with the main silver knob; it also is the “off” and “time display” selector. The secondary timer value is selected by tapping the “Mute/Toggle” button at the top of the unit, if a timer isn’t actively chiming.

For my first test, I set Timer 1 to 15 minutes. This required setting the silver knob to “Timer 1”, then spinning of the black wheel until the display read “0:15:00”, then pressing START.

After the 15 minutes were up, I pressed the START button to both mute and reset the time back to 15:00—the button’s full name is START/PAUSE/RESET, in case that seems weird—and pressed START again to restart the timer. EASY PEASY. I LIKE IT.

I also liked how the LEDs light-up green for each active timer, and flashes red when the timer has expired. On the other hand, the timers do NOT have unique alarm sounds. It is 4 beeps in a row, followed by a beat of silence, repeated for one minute. At first I thought the beeps might correspond to which timer was going off, like three beeps in a row would mean “Timer 3”, but that isn’t the case. You have to look at the timer and see which LED is flashing red, which I guess is OK.

So far, I like it. It feels solid, is easy to read, and pretty easy to use. I wish that the timer sounds were different, but it’s not a dealbreaker. At $28, it is more expensive than the OXO’s $18. The major annoyance I had with the OXO was forgetting to press a timer select button before it actually did anything, and if this timer does not show any comparable usability problems, then I’ll consider the extra $10 well-spent.

Time will tell if this timer dies or chews through batteries. It will have to sit on my desk for a while. I loaded it with the batteries on 8/30/2013; we’ll see how long it lasts.

The spinning wheel, which is used to set the time increment, is indeed a bit hard to turn, requiring more than one finger and a firm grip on the unit. This might be a feature, though, to prevent the timer value from being reset when handling the unit; you can add or remove time from the current timer (as set by the central silver knob) by spinning the wheel while the timer is running.