I’m getting closer to offering international fulfillment, having spent some time investigating options and associated costs. If you’re curious about e-commerce, read onward; there’s a juicy Google spreadsheet at the end of it that auto-estimates the cost for Amazon+FBA and a Shopify/Stripe/Shipwire service stack.

So I’ve been selling these Emergent Task Planner Pads on Amazon for about three years now, which has the following Pros and Cons:

The main disadvantage, though, is that Amazon won’t ship my products overseas. While Amazon does technically offer “Amazon Export”, your product has to be on their approved list of exportable items. As I make custom products, it’s unlikely that they will ever get around to approving them. I have made two email request to seller support about how to get on the list and didn’t get through to them. My main option is to open an Amazon UK account and pay for a second Pro Merchant account attached to a UK-based bank. The less-attractive option is to enable “multi-channel fulfillment” on my account and pack/ship the boxes myself, but my goal is to have a turn-key operation where I don’t have to be stuck at home, 365 days a year, fulfilling orders out of a basement choked with piles and piles of inventory.

Amazon isn’t the only game in town, of course, when it comes to fulfillment. There are dozens of companies that will do fulfillment for you, but most of them don’t have the convenience of the Amazon dashboard (aka Seller Central) from which you can observe orders received to orders shipped, with revenue deposited directly in your bank account. That’s the great part about using Amazon and FBA.

With the launch of the ETP Mini Notebooks, I’ve been getting more inquiries from Europe and Canada, so I’ve been looking at the options again. I think I have a plan put together now, and it involves connecting three services together: Shipwire, Shopify, and Stripe.

After considering and then rejecting fulfillment from home using Endicia or Stamps.com, I took another look at Shipwire, a fulfillment company notable for the breadth and integration of its services with existing e-commerce platforms. It was said to be less expensive than Amazon, which charges a 15% fee plus various handling fees. At the time, I found the Shipwire website detailed but short on providing a comforting big picture; all I really wanted to know was the following:

When I last looked at Shipwire, the first three questions are somewhat easy to find, but the last two items were difficult to resolve. My lack of familiarity with e-commerce didn’t help. Since I couldn’t tell how easy it was, I just gave up on it. This time around, driven by the desire to SHIP INTERNATIONALLY (and with experience using Amazon FBA for comparative purposes), I was able to extract a clearer picture for myself.

BILLING: From what I understand, you start off with Shipwire by pre-paying into an account. So long as there is money there, Shipwire will take your shipping requests and fulfill them, deducting the cost of order and fulfillment. There’s also a monthly storage fee which starts at a minimum of 64 cubic feet (around $25/month). When I first read their website, I thought that I had to estimate the number of orders I would have and then pay them in hundreds of dollars in advance every month. I don’t want to pay for services I don’t use; since I’m not sure what my monthly volumes will be, the idea of paying $500 up-front was very off-putting. Somewhere buried on the website, though, it mentioned that you pay-into an account and keep it funded, which means that I can pay-in a lower amount and add money as I go. That’s was what I was missing; before I thought there was some kind of monthly “service subscription” model like a mobile phone plan.

INTEGRATION: I want my life to be as close to “1. make content 2. cash checks” as possible, so integration is important. I don’t want to be copying order information from emails into a shipping system or double-checking inventory. Shipwire, by itself, won’t handle sales or payment processing, though it does have ample ways to connect with the system. The next step is to see what other pieces I need.

Shopify is the “online store” part of the e-commerce machine. It’s a hosted e-commerce platform that got a lot of buzz in the design community when it launched many years ago, as it was built from the ground-up to both look and work nice. Many of the other e-commerce solutions were monstrosities of mishmashed code, annoyingly inconsistent and difficult to use. I learned recently that it can talk directly to Shipwire, which makes it a good candidate. Plus, I’ve always wanted to try this service out; I just didn’t want to ship any boxes myself.

Shopify costs $14/month for its very-most basic plan, though the $29/month plan is the first level that allows you to customize the look of your store through “themes”. However, one can also sign up for Shopify’s Partner Program, which is intended for developers creating stores and applications for shop owners. As a developer, you can create what is called a “Dev Store” without starting a paying plan; it’s only when you’re ready to make that store “live” that you have to upgrade it to a paid account. This is the option I will be trying.

Shopify is essentially the “store” part of the operation, where I will upload pictures of products and accept orders. Shopify charges 2% per transaction, and presumably will talk directly to Shipwire to have packages shipped. As a bonus, Shopify also now can sell digital downloads, so I may move some of the custom form designs from Gumroad. Gumroad does have the advantage, though, of accepting payment and then shooting it directly into a bank account; if only it could integrate with Shipwire directly! Alas it does not, so that makes Shopify the next-best solution. Unfortunately, Shopify does not accept payment itself; it needs to be connected to a payment processor.

A payment processor is the company that accepts money from customers. Credit cards and PayPal are the two major forms of payment received over the Internet. To accept credit cards, one either needs to establish a “merchant account” with a bank, and then sign a multi-year contract with a payment processor. Alternatively, you can sign up with a company that already has a merchant account and accepts payment on your behalf, funneling your receipts to a regular bank account at regular intervals.

Stripe is a version of the latter service, and it’s the darling among developers because it is easy to add to your own code. With a few lines of code, you can add credit card processing to your own application! The documentation is also amazingly comprehensive and well-organized, which stands in stark contrast to PayPal’s junk heap of ambiguity. Testing transactions is also super-easy to do in Stripe, whereas PayPal requires you to log-in to three separate developer accounts in open browser windows, otherwise the test will not go through. Did I mention that PayPal is also ridiculously slow in response, and sometimes offline? It’s a huge kluge that I am happy not to deal with.

Anyway, Stripe is offered as a preferred payment processor in Shopify, and I believe it’s integrated right into their system so you don’t have to do any programming. Or so I am told; I’m still setting Shopify up.

Although I have this new system sketched out in my head, I wasn’t exactly sure if the combination of three services would be a better deal than Amazon. There are a lot of fees and costs involved.

To get a grip on the costs, I made a spreadsheet in Google Docs to list all the fees. It’s public for viewing (and presumably copying) if you want to experience the mind-numbing excitement of e-commerce in one soul-sucking place. 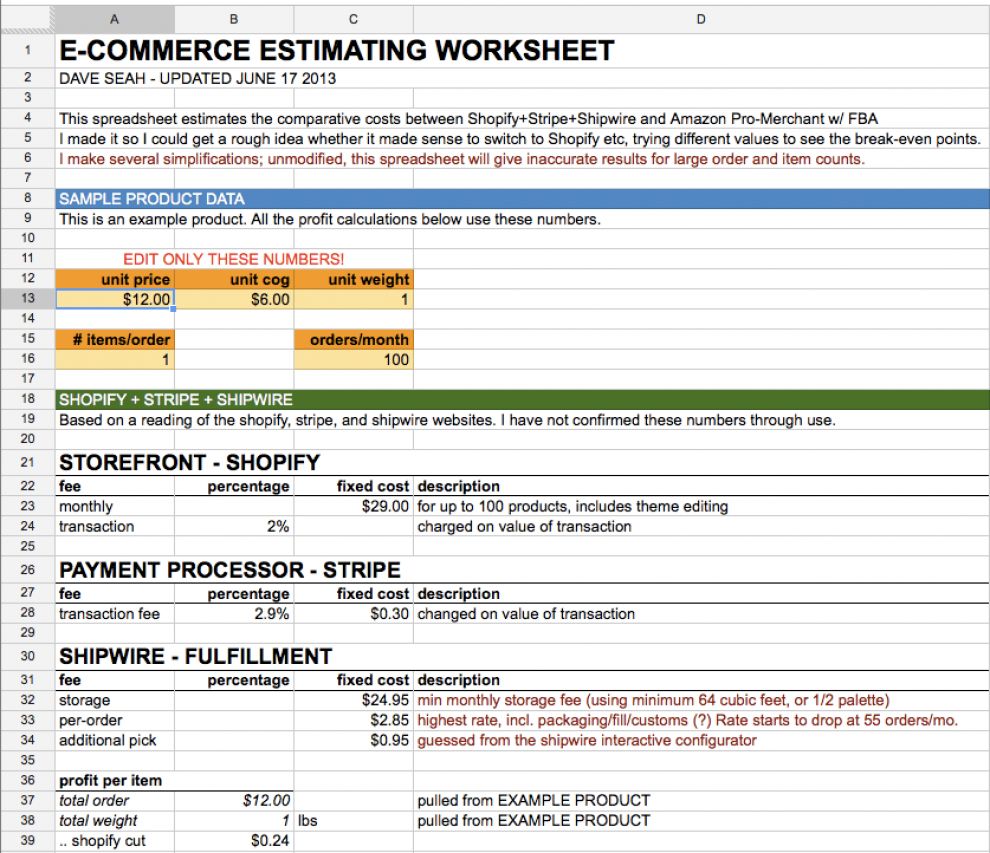 To play with the values, edit the five at the very top under “SAMPLE PRODUCT DATA”. You will have to be signed-in to Google Docs and then make a copy (see the File menu) before you can edit anything, as this spreadsheet is “view only”.

The values entered are used in all the calculations for Amazon Pro Merchant + FBA and Shopify, Shipwire, and Stripe.

You don’t have to edit anything else unless you want to modify some of the rules. I’ve made some simplifications for the weight fee calculations for Amazon, and I’m making an assumption that both Amazon and Shipwire are storing only a half-palette of goods. Also, if you are shipping goods in a category other than “Office Supplies” on Amazon, the fees may be different.

After getting all the data in, it looks like the Shopify+Stripe+Shipwire approach will actually come in 4-10% cheaper on a typical order.

At this point, I’m ready to start piecing together the system. I have to list a notebook as a product on Shopify, then sign up for Shipwire and send them some money and inventory. I also need to add two payment processors to Shopify, Stripe and PayPal (by popular request, if not by personal preference).

I’m also not sure if my understanding of Shipwire’s services is complete. For example, I’m pretty sure Shipwire includes shipping boxes and that this cost is included in their per-item fee. I’m not sure what their per-item labeling requirements are either. I’m just going to have to try it and see what happens. Shopify is also new to me, so figuring out how it works will take some time.

That said, at least I have a model for how it is all supposed to work, and the monetary risk is not as high as I thought it would be. Plus, if this all works right, I won’t create extra manual labor for myself; to me, that’s worth paying a few extra percentage points. We shall see!