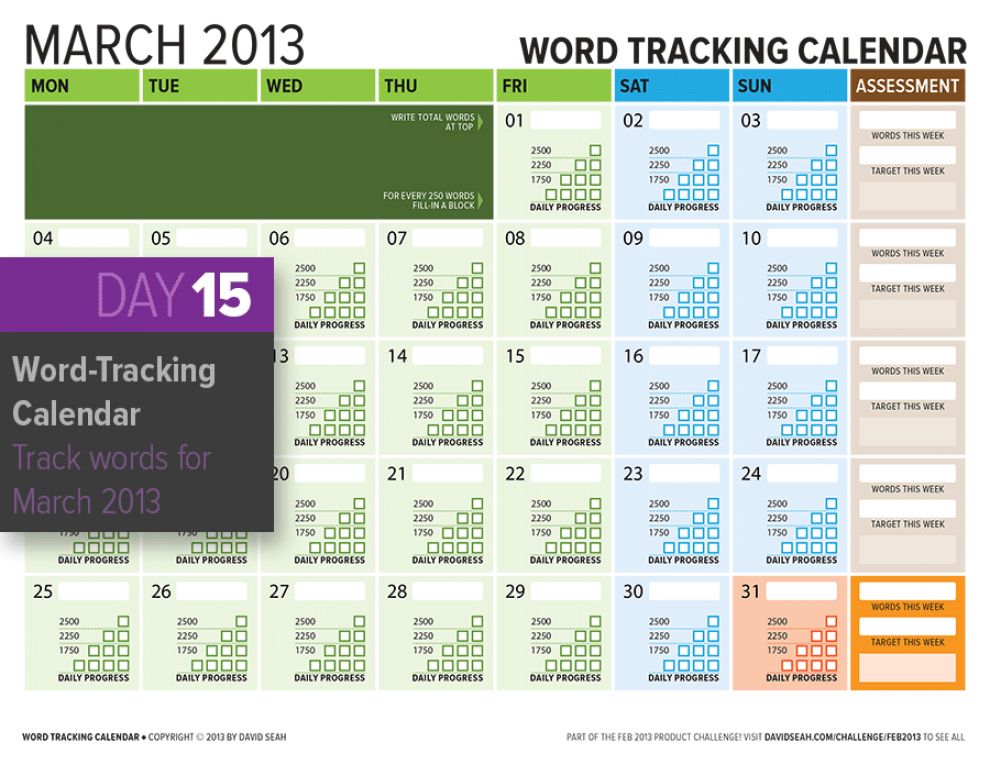 Last November I participated in the National Novel Writing Month, AKA NaNoWriMo. The goal is to write 50,000 words in a month, and of course I had to make my own Nanowrimo calendar. To do 50,000 words in the 30 days of November, that required an average of 1,667 words a day. I decided to visualize this by providing a stack of 10 blocks, each representing 250 words, that I could fill-in from the bottom to the top. Success can be projected by looking for daily blackened blocks. If I filled the minimum of 7 blocks, I was doing well. If I filled in more, which I often did, I had a visual indicator of having “reached the pinnacle of achievement” for the day.

Later, several people asked if I could make a version for other months of the year. And so, today’s product-of-the-day is a version of the NaNoWriMo calendar for March 2013. I had to rebuild the template from scratch; apparently I had not saved the original in a place that was backed-up when I embarked on the Great Windows 8 Migration of January 2013. I was also out for most of the day, so to get the product-of-the-day out I decided to just cover March. Total production time was around 90 minutes.

This variation of the calendar, like the NaNoWriMo version, counts words. I made a few refinements: providing an explicit field for “total words of the day”, and also simplifying the weekly total column. For future variants, I have ideas for tracking percentages and other cool metrics, so if you have an idea for something you want to count, let me know and I’ll try to come up with something in the next few days!

I am challenging myself to create a new product every day for the month of February 2013. The Challenge Page lists all the products in one place. Check it out!