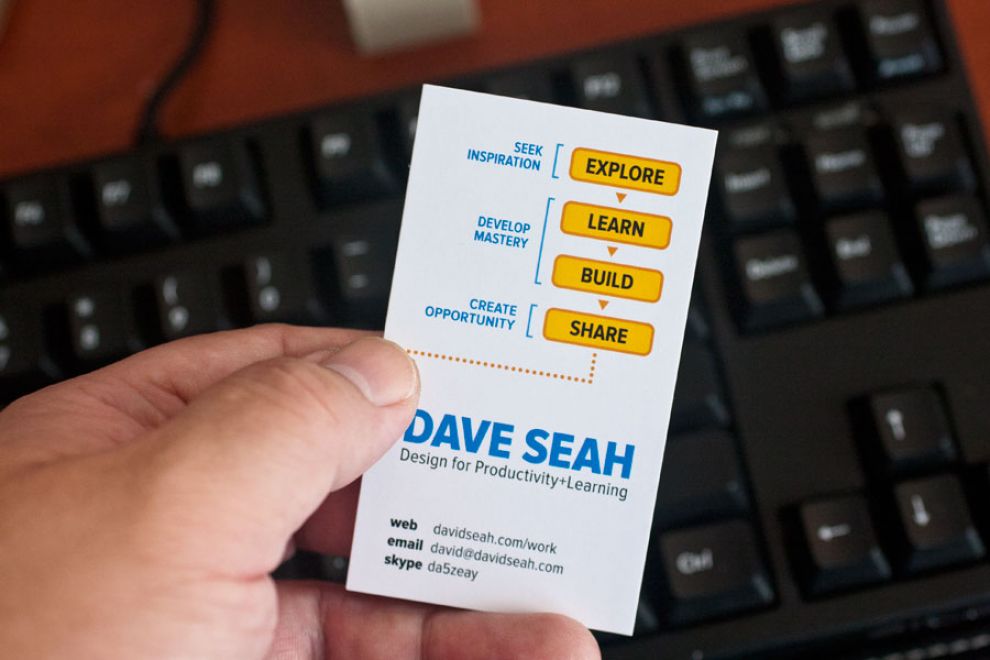 I got my cards printed by 4over.com, a large trade printer, to see if I liked them. My experience with their ordering process was exceptionally smooth, with great feedback throughout the multi-step process. It’s among the best I’ve experienced. I was very hopeful that the output itself would be great. 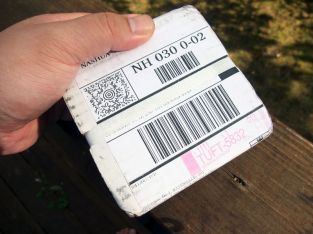 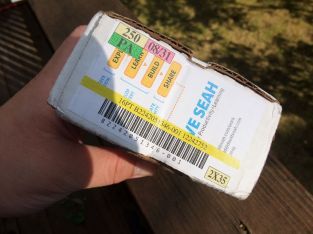 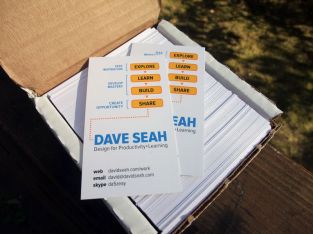 The shipping package was pretty typical of a printer. I liked that they included a copy of the proof on the label, so you could tell what it was.

I had ordered a quantity of 250 cards, and since this was a small run it was printed digitally instead of offset. A digital press is like using a giant computer printer, whereas offset printing uses etched plates that are inked and run through a traditional printing press. I had been attracted to 4over because they use a 500-line screen, which is somewhat similar to “pixels per inch” when judging resolution; I was wondering if their digital press also used the same screen approach.

I used a 50mm macro lens to magnify the detail: 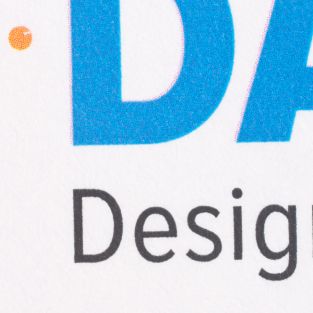 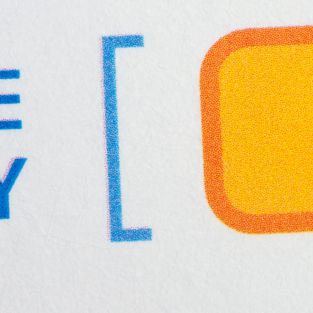 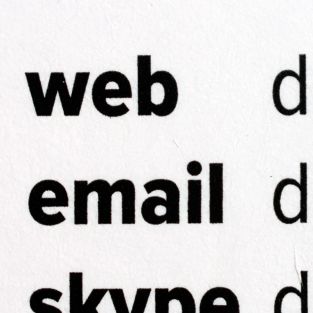 You can see the dots here, which are allegedly 20 microns in size, smaller than the diameter of very fine human hair. To the unassisted eye, the dots run together and create the illusion of smooth color…it’s impressive! The black (far right) also looks pretty good. The only problem I see is that the registration of the cyan layer is not perfect with respect to the yellow and magenta layers, and it may be close enough not to matter with the naked eye. If I had been using strong yellows / magentas right next to a mostly cyan element, though, I might have seen a subtle fringing effect, but I am also being very nitpicky. NO ONE WILL SEE THIS FRINGE unless they’ve got 10x to 30x of magnifying power in their hand. 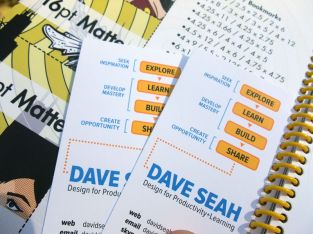 Of more serious note is the heaviness of the card stock, which is 16 thousandths of an inch (16pt) thick. This is regarded as thick premium stock, and it feels even thicker if you UV coat it. However, I went with matte 16pt stock, and it’s OK. It’s not ridiculously thick like I had hoped. This isn’t 4over’s fault, but it does make me want to hunt for some thicker options.

Just to be sure, I compared the 16pt matte stock in the 4over sample book with my cards (image right), and it’s indeed the same. The page feels more substantial mounted in the book…perhaps it’s the overall weight or the direction of the paper grain that makes it feel different.

Comparisons and Other Thoughts

Looking at these cards fresh after a week of being away from them, I think I might agree with the comments on round 3 about the outlines on the yellow boxes. This should go! I also have the feeling that they need to be a big bigger, but I’m flip-flopping on that. The desire for something to plus the card—that is, push it into a higher orbit of design—is still with me. Simplifying the lines slightly will help.

I can also see that I can use lighter tones without them breaking apart, thanks to this 500 line screen technology. Here’s some examples of older cards from 1995 to 2009 that use old-school screening. 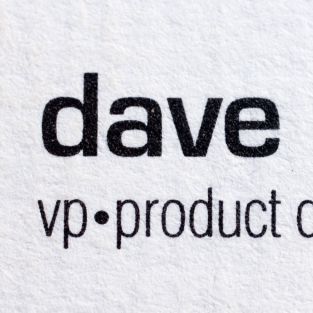 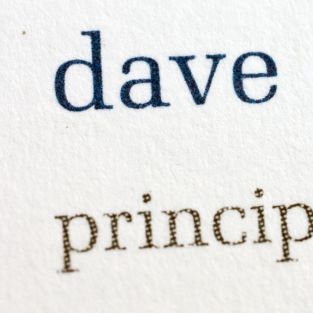 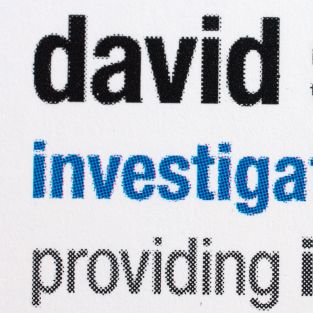 The cards from left to right represent 1994, 2001, and 2009 printing. The first two cards were printed using local printers under strong direction from the designer. The last card, on the right, was printed using an online printer. As you click on each example, you can see the relative quality of the screening from none (left) to mushy (right). I’d say that the 4over.com output is pretty good for an online printer.

Finally, I looked at the color differences between my proof (left) and the actual printed product (right): 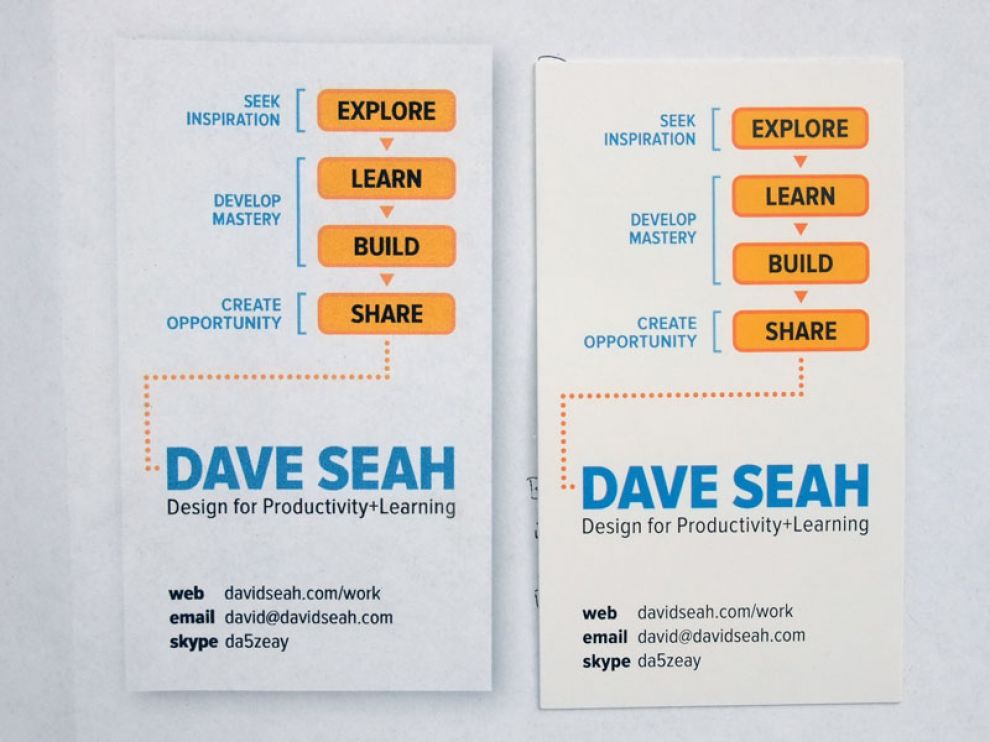 It is fairly close. The printout (left) is printed on whiter paper, apparently. However, the relative differences between the yellow and orange are pretty close, if a little blurry. The blues are pretty close too. The text thickness, however, is slightly more refined on the printed version; I’ll need to take that into account for the next run, as I feel they are just a bit too unsubstantial.