A couple days ago I started working on new business cards, doing a bit of on-the-fly thinking to come up with an idea. Now, it’s time to do some refinement.

Here’s the image from Round 1: 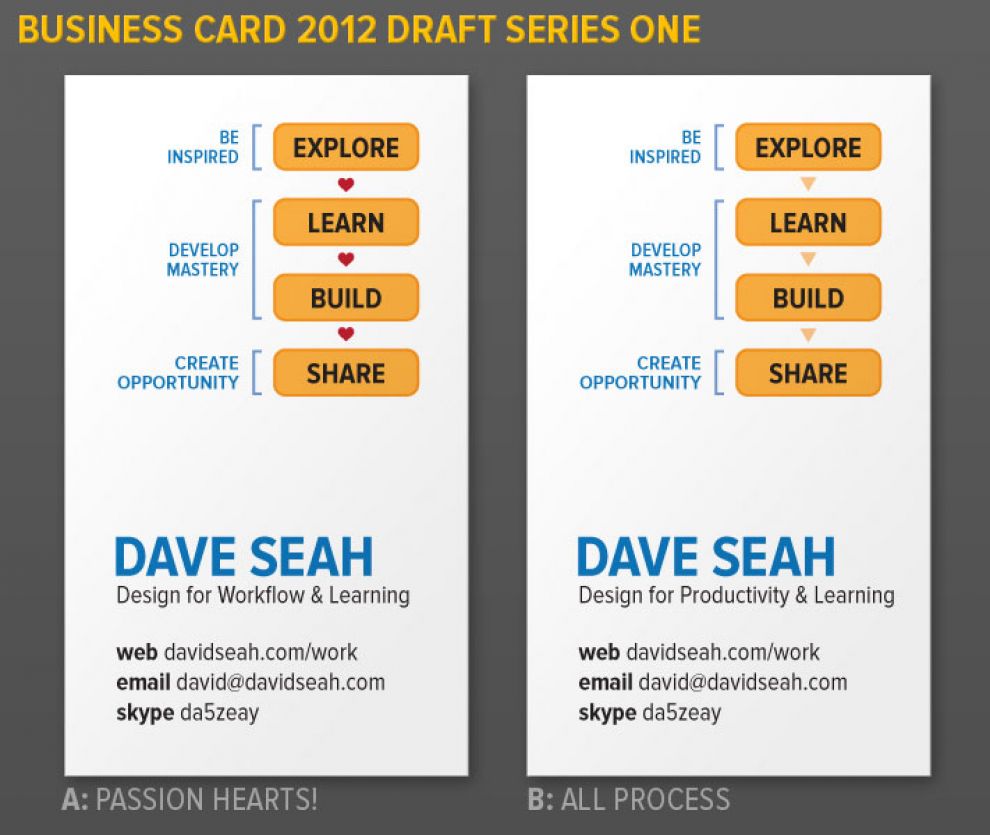 Here are the new Round 2 tweaks, based on feedback from readers both on the site and on Facebook. Thanks for all the great comments! 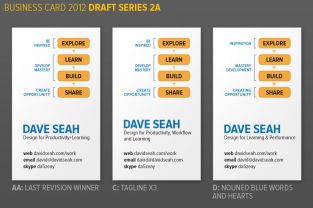 AA: I’d changed the way the tagline looked, replacing the & with a +, and removing the spaces to make the line more compact. The use of a plus sign creates a compound word, sorta, instead of the “Sanford & Sons” association I have with the use of the ampersand. Plus, it just looks tidier to me. I like this.

C: This is a suggested tagline change. I actually tend to use this construct in my writing; it’s a habit I’m trying to break, actually because it’s “listy”. Great for ending a paragraph with authority. However, it spills to two lines, and makes the card just a bit too dense for my liking. I also feel that it’s somehow become less focused in the offering…are productivity, workflow, and learning all related? Sorta. It seems a tiny bit less credible than just having productivity+learning. Or workflow+learning, which might be better.

D: This is a change in the phrasing of the blue words, converting them from action verbs to categories of action. I don’t really like this, because it seems now that there are two conflicting hierarchies. Before, the blue words (deliberately less bold, and a cooler color) were intended to be descriptive of the process to the right. Now, they seem to be two systems that are implied to be related, but the linkage is not clear. Confusing, I think. But that’s just my interpretation. For all I know, my original diagram makes sense only to me.

E: It was suggested that I add a gradient. Usually I don’t like adding gradients to printed designs, because they’re tough to reproduce smoothly in paper and can be super-cheesy if overused. The gradient is one of the first things that a stuck graphic design student will do to a background to try to add some life and interest…it’s sort of like adding reverb to a bad recording, or using a synth pad to create atmosphere in a piece of techno. However, when applied subtly, it can add dimension and bring visual elements forward. And if I’m going to graphic designer hell, I might as well add a drop shadow! I applied a light one to just add a bit of dimensionality, and it does change the nature of the card…I kind of like it. So, I guess the moral of the story is don’t poo-poo the gradient until you’ve tried it. But do it after you have a strong layout concept, and are using it for a reason other than “filling empty space”.

There is a practical worry: the smooth gradients may look great on a screen, but they could break up into visible bands when it’s printed. The printer I’m considering for this run, 4over.com, is using process color, which ordinarily means that I need to be very careful about gradients. However, this printer is also using a 500-line screen, which means that the gradient pattern dots will be very tiny, and maybe will blend well. It depends on the resolution of their RIP, too, which is unknown. That determines the number of fine gradations that can be reproduced, unless they’re using a stochastic screen, which would eliminate the banding altogether. If I were really serious about this I would do my own stochastic black plate in Photoshop, but now I am really getting into the weeds.

Oh, this revision also has digital hearts, or what could be interpreted as heart. I didn’t feel they worked on the non-gradient designs because it creates more complexity in the interstitial spacing of the word boxes, which grabs our attention and breaks the flow of reading a little too much. I don’t want these to be focal points. I want them to attention guides that read once, then fade away from conscious sight.

F: One commenter said something about the text alignment being distracting. I wasn’t sure exactly what was meant, but this is one interpretation: the ragged left edge interfered with the flow of the card. So, flipping the graphic horizontally is one was of fixing that. I had deliberately reversed it, though, because I liked how the eye moved diagonally from the upper right to the lower left, taking a detour through the blue text. More eye movement is interesting. When I have the card laid out like this, you can just read straight down from top to bottom very fast which is…somehow diminishing. The original layout is like an IKEA store, which makes you wander through a maze so you see everything. The flipped layout is like straight slide, and it’s more difficult to catch the blue words the first time around because your eye is being pulled down that left edge so fast.

Incidentally, this card does have verbiage change to seek inspiration, which I didn’t think would work but it actually IS much better. Gotta see things in context, sometimes.

G: This is another interpretation of the alignment comment. I left-justified the text in the boxes and then was forced to move the diamonds. I really don’t like this layout.