Three Programs I Wish I Knew How To Use

Music! Graphics! Code! As a nerd who loves the feeling of creative possibility, I have the tendency to acquire more software than I use. I also keep upgrading to the latest version because I tell myself I’ll get to it someday, which takes 10 years if it happens at all. I think I really just like the feeling that the possibility to create is there, when I’m ready. 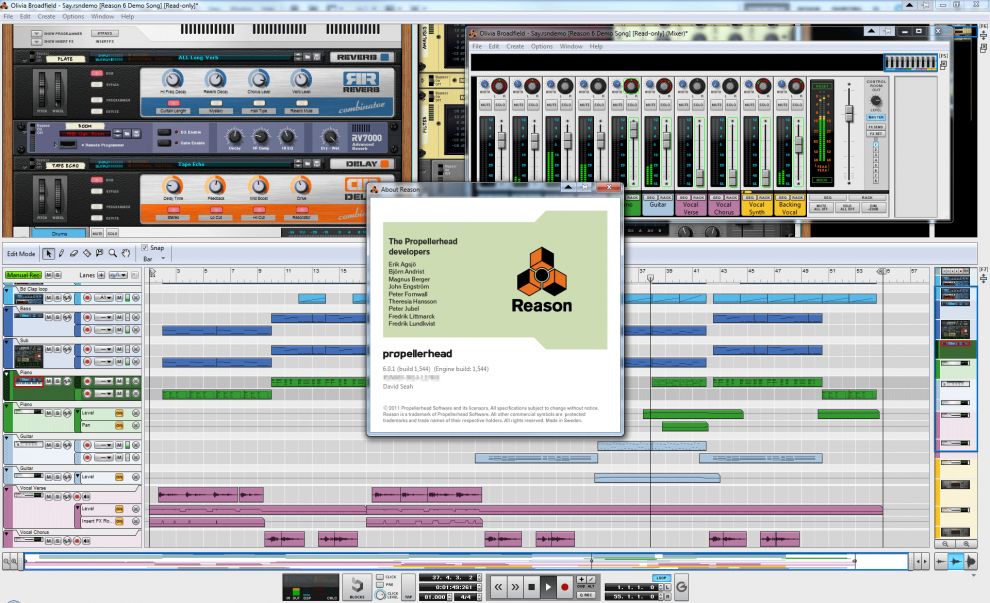 Reason is an audio production studio in a box, providing a HUGE selection of sound synths and audio effects in one sweet package. It can literally replace an entire music production studio; other than your computer, you need a good microphone, maybe a MIDI keyboard, and the will to use it. I use it to record the occasional podcast with my friend Sid, but I haven’t explored the music side of it.

I have a long-time fascination with computer-based audio synthesis, and music composition in general, though I tend not to act on it because I’m naturally a “words ‘n graphics” guy. When Propellerhead first released Reason 1.0 back in 2000, though, I had to jump on it because it was such an innovative product, from an up-and-coming Swedish company known for its stylish virtual versions of classic drum machines. After installing it, I also found that it was a rock-solid piece of software engineering; back then most music software was buggy, crash-prone, and just plain clunky. Reason is beautiful software, and Propellerhead is one of my favorite companies to watch. Even though I don’t use it to its full potential, I really want to. Someday…

For a glimpse of how the software works, this “artist’s story” of Olivia Broadfield using Reason will give you an overview of how she employs it in her creative process. It’s inspiring to me because she organically explores its tools, noodling her way through it with excellent (and profitable) results. 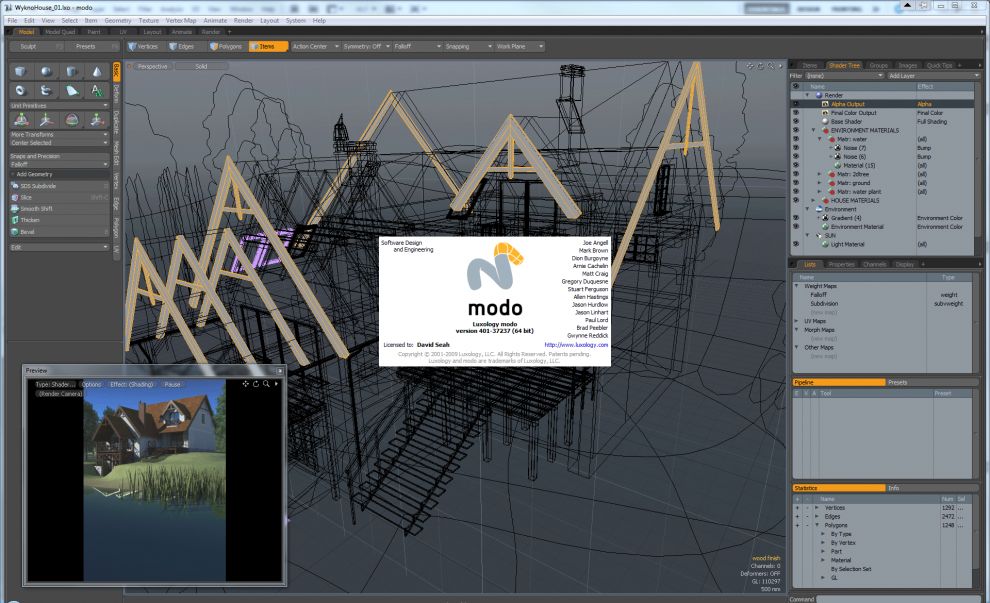 Modo is a 3D design program, with which you can visualize and animate practically anything. You use modeling tools to shape, paint, and detail objects with mathematical precision, and then use the suite of lighting tools to create mood and atmosphere. If you want the objects to move, there are animation tools that help you position and alter your models. You can flip through the Modo gallery to get an idea of what people do with it.

3D programs are used by video game developers, architects, industrial designers, and filmmakers. I bought it for a museum exhibit project a few years ago, but haven’t touched it since. In a rare display of self-control, I have not upgraded for TWO major versions [insert sad violin music here].

While Modo is not as mainstream as long-time industry standards like 3D Studio Max or Maya, it has an awesome lineage. The founders of Modo’s parent company Luxology are the creators of Lightwave 3D, which ran on NewTek’s much-loved Video Toaster waaay back in 1990. NewTek is the company that made high-quality video production affordable, and it BLEW OUR MINDS. Before the Toaster, the idea that you could make your own broadcast-quality media at home was just crazy.

Fast forward to 2008. One of my friends, who had kept up with 3D modeling tools, told me about Modo 1.0, and I was enthralled by several of its salient aspects. I trusted Modo’s lineage and appreciated the flexible “use anywhere” licensing—you can use both Mac and PC versions and install anywhere, so long as only one copy is in use at a time. It was also considerably cheaper ($400 or so) than 3DS Max, which I used to own but stopped upgrading (a new 3DS Max license is about $3000). But the main selling point was the way the company was building a community around its product. It’s not entirely bug-free, and it doesn’t do everything that a mature package like 3DS Max can do in a production environment, but it has aspired toward that end from the very beginning. And Modo delivers on image quality, user-friendly workflow, and cutting-edge features that made me gasp. I could possibly get the same feeling with the free Blender software, which is quite capable and has made great strides over the years, but I feel that Modo has a stronger central design philosophy.

It has been years since I’ve had to do any 3D work (3D Studio R4 is the last 3D program I really used extensively), but some day I’ll get back to it, I keep saying to myself… 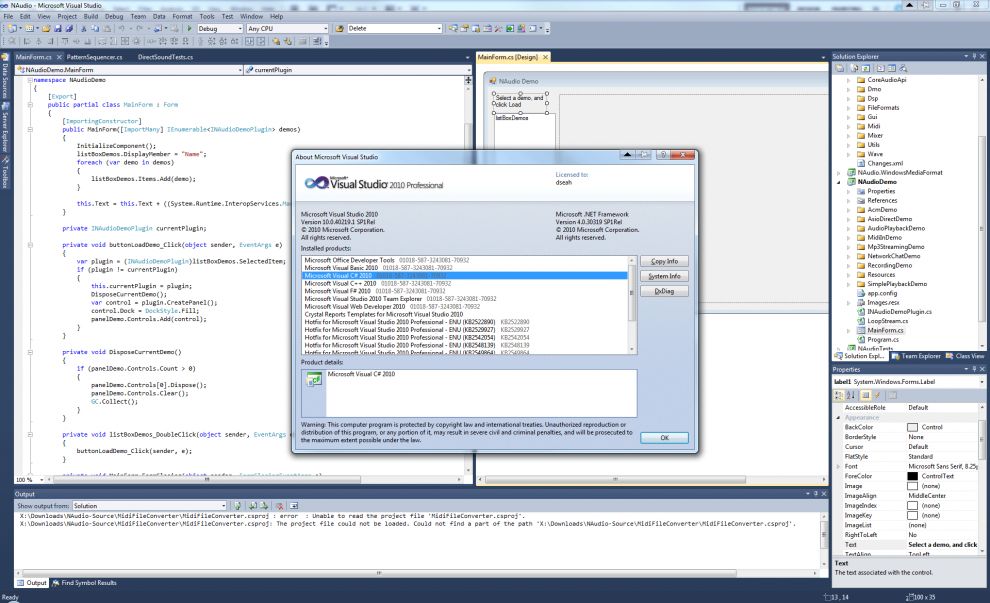 I used to aspire to be a master programmer, but when I turned 35 I finally let it go. However, I haven’t completely avoided programming itself, and when I rediscovered Microsoft Visual Studio I was stunned at how good it was. It’s an “Integrated Development Environment” (aka IDE) that combines program writing, code generation, and debugging into a single application. Visual Studio is the gold standard by which all other IDEs are measured, because its feature set is almost magical in what it can do. I’m not aware of any IDE that comes close to its speed and feature set, on any platform.

I finally used it for a museum exhibit in 2008, making frogs swim in a 3D pond, and I enjoyed the experience of using a modern IDE. With that under my belt, a world where I can my own desktop applications has been revealed, but there is an incredible amount of learning that I have to absorb. I have the programming acumen, but lack the specific experience of coding within the context of a complex operating system. It’s a task on the scale of moving to a different country and becoming a taxi driver; you have to learn where all the neighborhoods are and how to get to them, all while learning the day-to-day social conventions of your new home. I aspire to be like the taxi driver, but first I have to learn just how to get to point B from point A. At least I “know how to drive”.

Along similar lines, the allure of iOS has me thinking of taking a deeper dive into Apple’s IDE, Xcode. However, as a piece of software I don’t find it nearly as nice as Visual Studio, and find it unpleasant to work with. Objective C doesn’t exactly help either…it’s one of the most ungainly-looking languages I’ve seen! These are both dumb reasons not to program, though, which I believe supports my observation that I’m not destined to be a master application developer. Although I don’t know…the Flash Actionscript IDE is pretty blah, but having spent great amounts of time in the Flash environment I didn’t have a problem with it. Maybe it is because it’s much easier to get high-quality visual result in Flash thanks to its integrated graphics authoring tools, so I think less about the crap tools and more about what I am seeing.