From the Mailbag: Three Productivity Tools

I finally set up a testing environment for software (thanks, VirtualBox!) so I’m in the mood to share a few things that have been sitting in my review queue since (yikes) January: 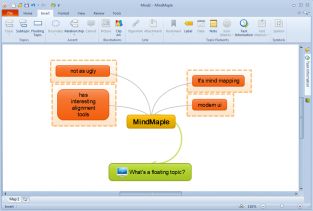 MindMaple is a business-oriented mind mapping application for Windows. I don’t use mind maps apps as they are usually really ugly (particularly on Windows).

After playing with it for a few minutes, my impression is positive. It seems to be capable of creating attractive mind maps that can be exported in various formats. The lite version exports to other Microsoft Office formats (Excel, Word, Powerpoint) and even HTML. The Pro version will export to PDF. It’s nice to see a mind mapping app that doesn’t use an ancient GUI toolkit from the 1990s. Worth checking out! 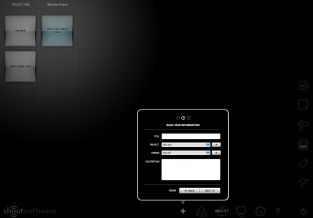 ShoutDone is a to-do list app that uses columns to represent projects and their associated tasks. I’ve played around with this style of layout by hand, and it’s a pretty compact way to represent multiple projects at once, so I was curious to see how a digital version would work.

ShoutDone adds the ability to “spotlight” tasks using a graphical effect, which is a nice touch. You can also filter by several criteria like “task size” and “earning potential.” There’s a built-in countdown timer, and it can synchronize data online and through Evernote. I found the task entry to be finicky (this needs some polish) and the app has the this isn’t like Windows or MacOS aura that all AIR apps suffer from, but overall I thought it was a promising package. Worth keeping an eye on. 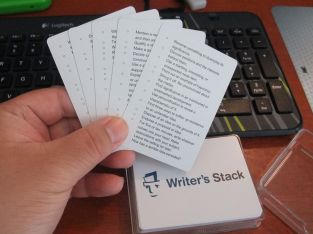 Writer’s Stack is a quirky productivity tool for writer’s block created by Nathaniel Moffat, who sent me a deck to try out. The Writer’s Stack is the same size as a deck of playing cards, and each card lists a plethora of block-busting actions you can take. Conceptually it reminds me of Oblique Strategies, but Moffat points out that unlike that deck, the Writer’s Stack addresses both strategy and tactics.

There are a lot of suggestions on each card, in total numbering in the hundreds. I think it’s a pretty cool idea, though you know me…I love physical paper stuff :)