A few months ago I got an email from someone on the behalf of Beeminder, a goals tracking web product that I hadn’t been aware of. What struck me about the email, unlike many I get regarding products, was how personable and transparent it was in its tone. It was infectiously charming, and thus intrigued I went to check out the product itself.

Beeminder allows you to track anything you can count on a daily basis: pushups, cigarettes, etc, and it plots them on a graph as you enter them. There’s an ideal curve called the yellow brick road, meaning that you are hitting your goals consistently over time.

If you fall off that ideal curve, the graphing stops, and you can’t enter in any more data. And this is where Beeminder starts to play mind games with you. If you want to start the graphing again, you pledge some real money. If you fail again, you have to pay the pledge, which is sort of like buying another “life” in a video game. Or, you could also rage-quit and stomp away muttering about how the goal was never very good to begin with, but that’s up to you. If they are your goals, and they’re important to you, you will not mind putting a little money on the line to help trigger the powerful loss-averse aspect of your primitive brain.

Yes, really. It’s such a powerful concept that I’m afraid to sign up for it, though I suspect it is just a matter of time before I do. That’s because Beeminder is not just a graphing program: it is an artifact that makes the underlying productivity theory both visually accessible and quantitatively concrete. It specifically draws on observations about human behavior, like how we suck at thinking rationally about the future. Specifically, Beeminder seeks to be a “commitment device” with teeth by making you PAY UP.

Beeminder is also a tool for people who like to analyze data. It’s exactly the tool I wish I had when I was following the Hacker’s Diet several years ago, because it applies the “sliding window smoothing” filter to daily weight using “Rose-Colored Dots”. There are a variety of other averaging and threshold filters with fun names like The Turquoise Swath and the aforementioned Yellow Brick Road. They are somewhat hard to see unless you zoom in; this is an example from their site: 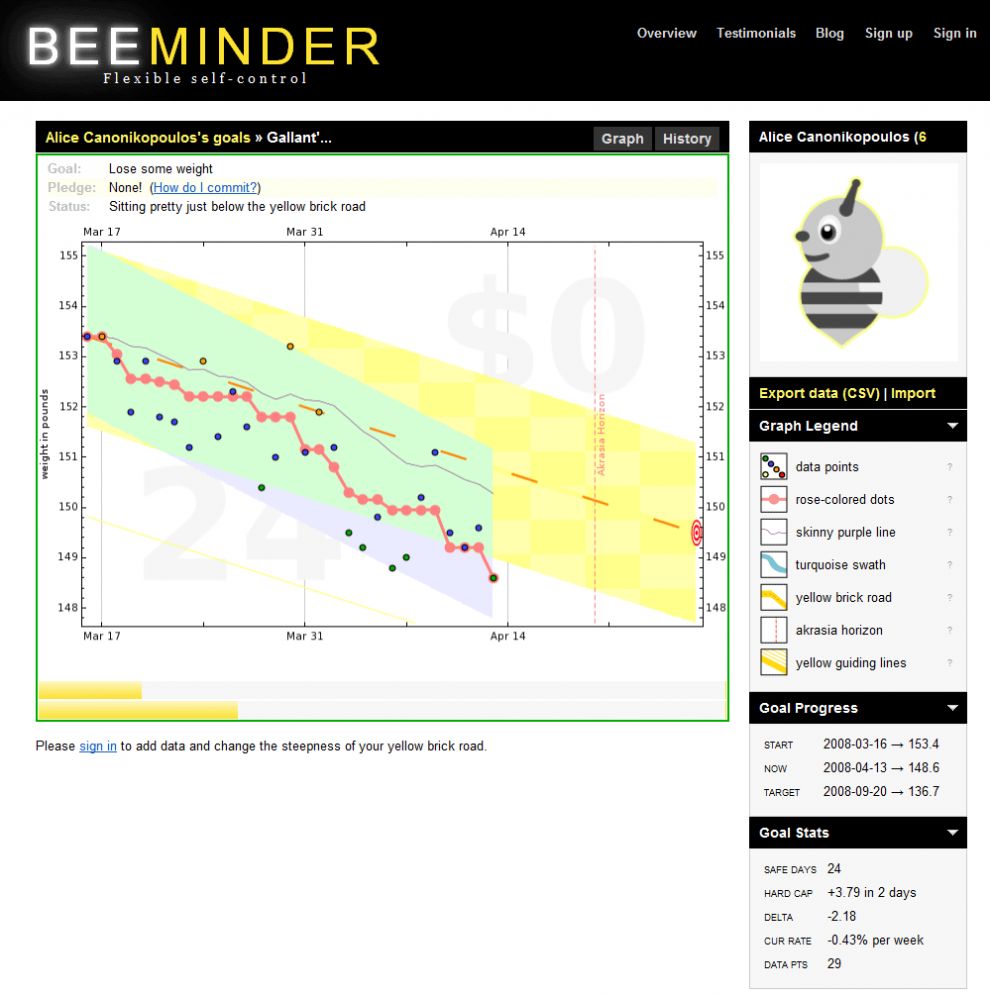 But this isn’t really why I’m writing about Beeminder, even if it IS a nicely-designed web application copy-written with a charm reminiscent of The Phantom Tollbooth. The reason I’m writing is because the blog is an amazing trove of writing about goal setting, written in an accessible magazine-like style—sort of an academic version of The Atlantic—that’s far more nutritious than the usual 10 WAYS TO MEET GOALS WITH A KITCHEN TIMER list articles rattling around the Internet. It’s smart, amusing, and generously filled with citations so you can learn more. I like it a lot.

The article that induced me to write about this was Flexible Self Control, which introduced me to the ancient Greek term akrasia. From Wikipedia (emphasis mine):

Akrasia (ancient Greek ἀκρασία, “lacking command (over oneself)”), occasionally transliterated as acrasia, is the state of acting against one’s better judgement.

This is an area that’s highly interesting to me, and now a whole new line of research awaits me. Thanks, Beeminder, for being there. Keep doing your thing!