Logo for “The Tiny School”

For the past 10 or so years, I’ve had this fantasy of having my own school where a bunch of my peeps could hang out, teach, and learn new things. The idea resurfaced when I was talking with some friends about the difficulty of maintaining a co-working space in a small town. If there was an additional draw—say, very short classes—people might think of co-working as something more than a social visit.

On a different note, I’ve been following Tumbleweed Tiny House Company people for years, and recently I stumbled upon those Little Free Libraries, which look like birdhouses filled with books. I like well-built small spaces that are designed for quirky lifestyles. 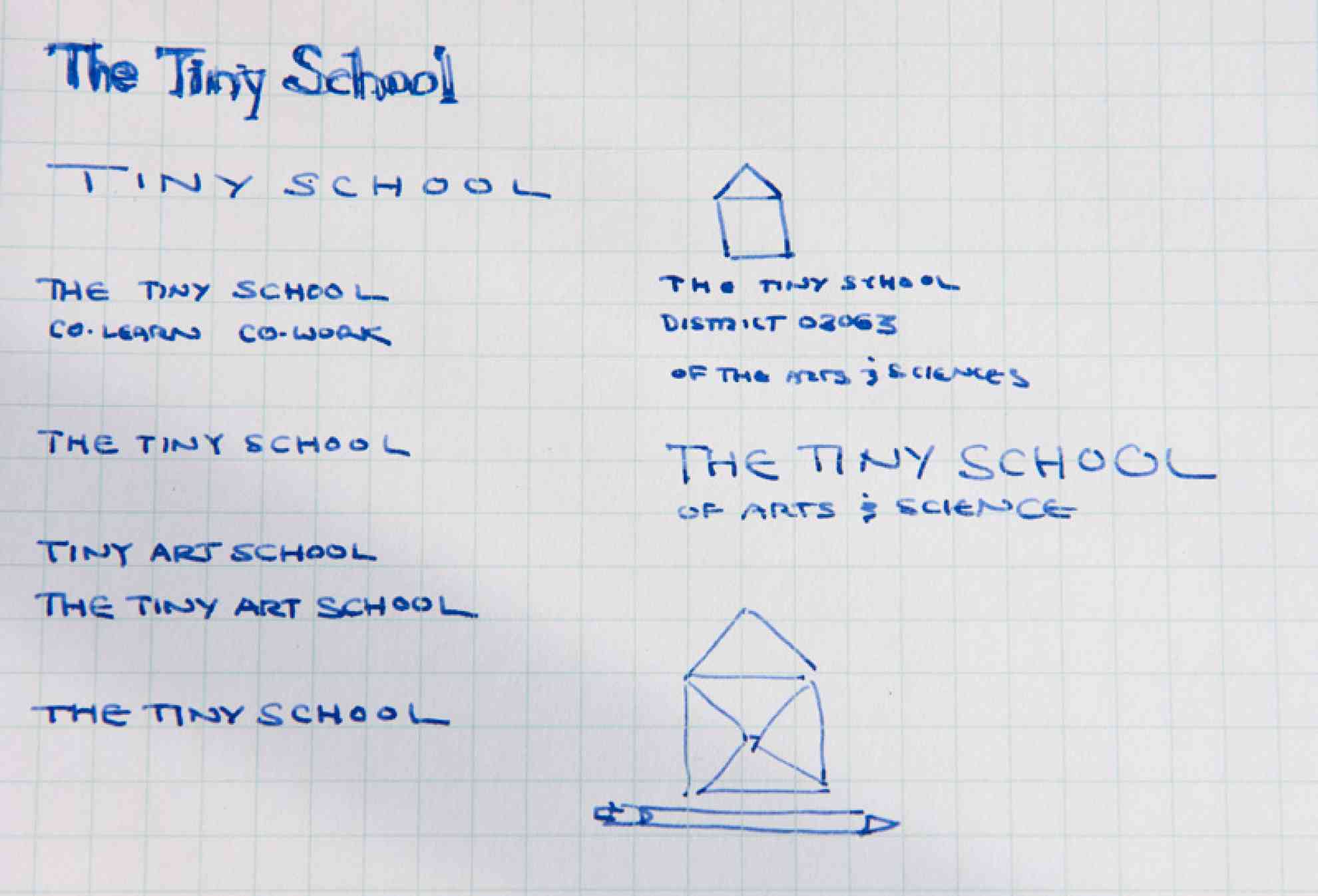 The desire for the small and quirky have combined with the school idea to create The Tiny School of Art and Science. I’m probably more excited about making tiny diplomas than anything else, but I decided to write about the concept this weekend to run by my friends. I then proceeded to get sidetracked doing logo design to accompany the collateral.

I had the not-very-original idea of drawing a tiny school house, but then I got to thinking about things I liked about the school metaphor:

[UPDATE: I’ve since been told that “dreamcatcher” isn’t the correct term, but just play along with me]

Dreamcatchers I particularly like. Though it’s just made of paper, it grants otherworldly powers limited only by their creator’s sense of humor.I thought this symbol of elementary school magic, folded in the shape of a house, might convey the right kind of irreverent DIY attitude I imagined.

So I mocked one up in Illustrator: 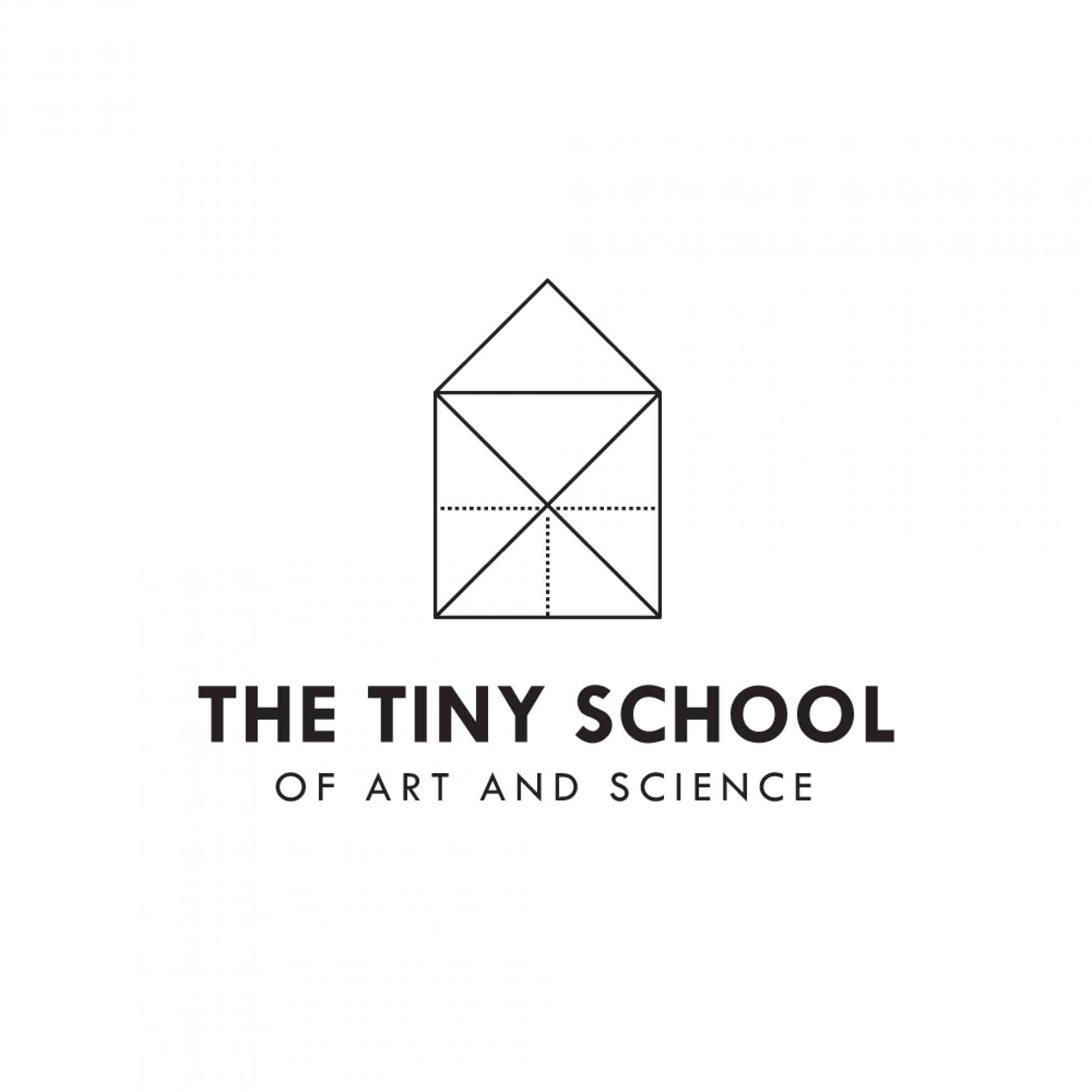 There are some positive qualities to this, though it wasn’t clear to me that people would recognize this as a dreamcatcher. However, the constructed lines gave it a kind of engineering precision.

The typeface is Tw Cen MT, which has that “modern feel” from 50 years ago; this gives the TINY SCHOOL a credibility through association, I think. I associate this typeface with lettering on the sides of libraries and academic buildings from the 1950s and 1960s.

I thought contrasting the typeface with a photographic element would create more visual interest, so I took some college-ruled paper, which I thought would add schoolhouse authenticity, and folded up some variations: 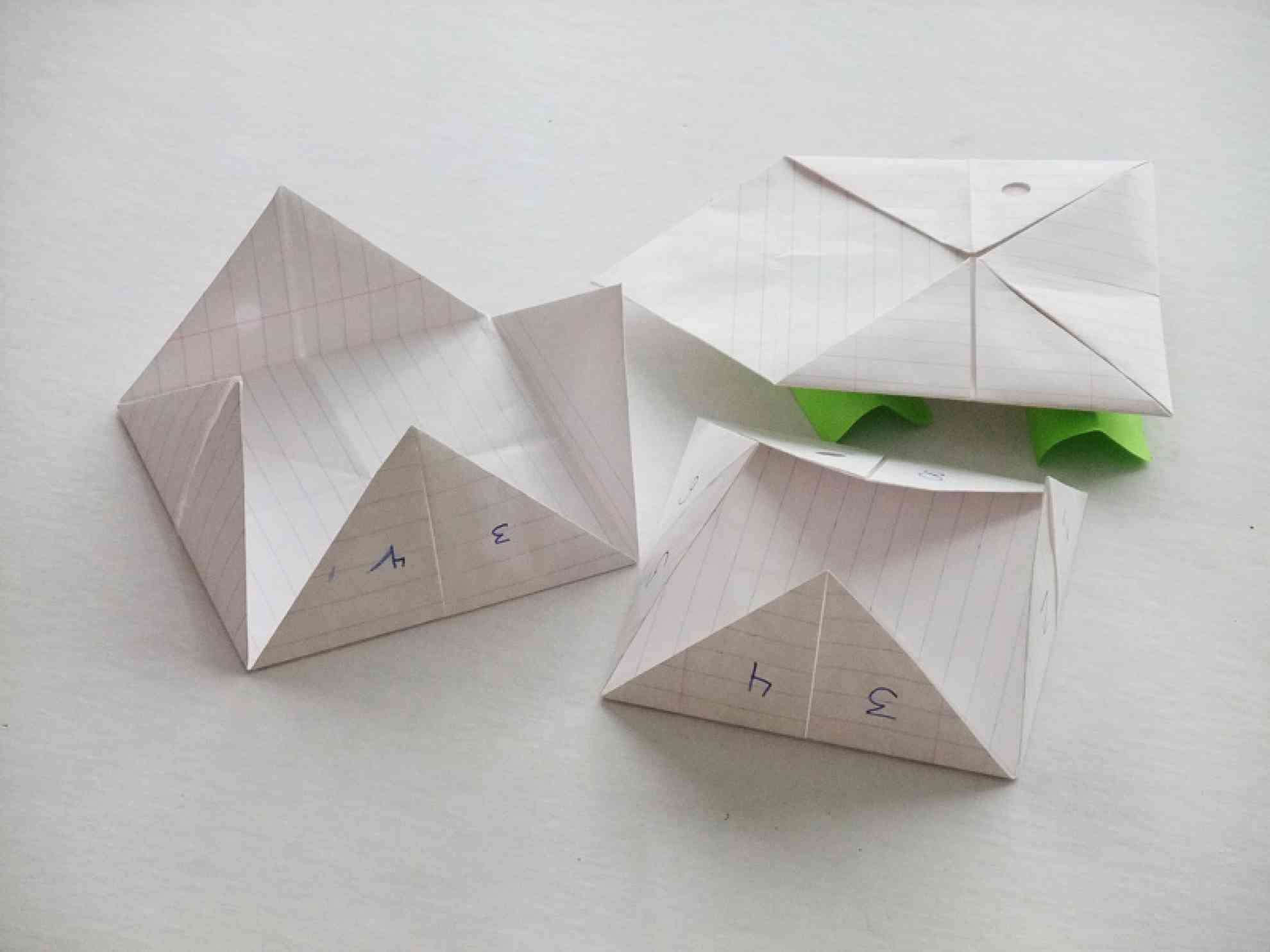 I initially thought I would write some numbers and words on the dreamcatcher to go with the idea of school. However, I found that the numbers were distracting, and I wondered what they MEANT. So I decided to use a blank one. Instead of referencing tradition and architecture, I’m instead making a suggestion that learning is associated with hand-folded paper and playfulness. And that is what I want the Tiny School to embody.

After picking a dreamcatcher, I set up an impromptu shooting table to photograph it. This involved a Manfrotto 649 Quick Release C-Clamp and a 396B-2 Articulated Double Arm clamped to the table to suspend my DSLR pointing down. After lifting the dreamcatcher on some folded pieces of cardboard (for better shadows), I stuffed a LumoPro LP160 manual speedlight into a brolly box, linked to my camera with a radio trigger set (the cheap and cheerful Cowboy Studio NPT-04), and started snapping away using a remote shutter. PLUG: Thanks to Sid Ceaser’s splendid workshop on off-camera lighting for introducing me to using off-camera lighting and gear! 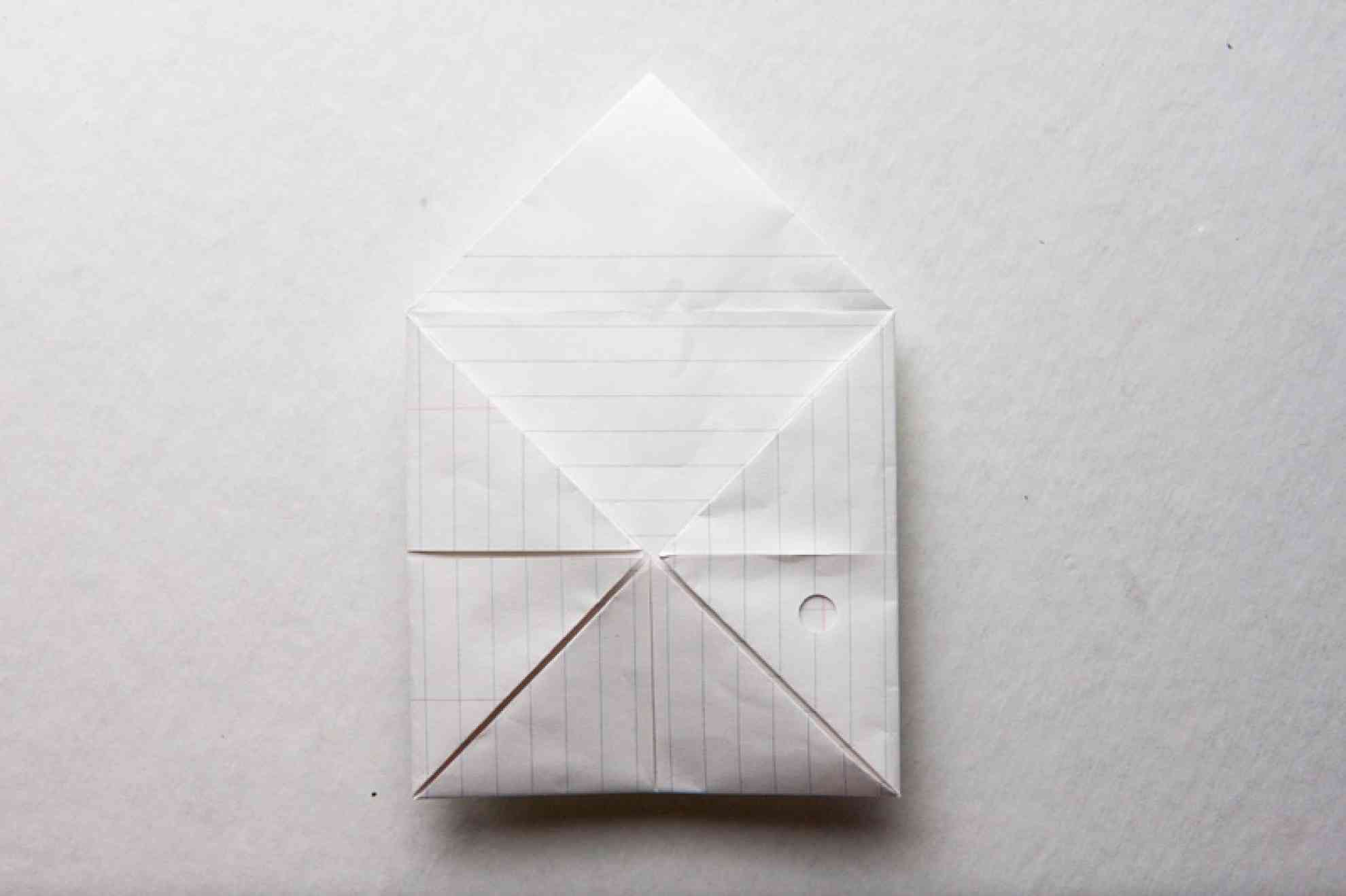 It turned out that I screwed up the placement of the light anyway, putting it too close to the subject. While the fadeoff looks nice, I’d forgotten that I would need to extract the image from its background and should have lit the scene more evenly. That means putting the light farther back and taking the inverse square law of lighting into account: at close distance, lighting levels can vary hugely in just a few inches, but farther away these differences even-out. I should also have shot on a gray background to make image extraction easier; ordinarily with an object you can overexpose the background to solid white to make the lift much easier, but with a white piece of paper this wasn’t possible. I ended up having to manually mask the object in Photoshop and reconstruct the shadow. 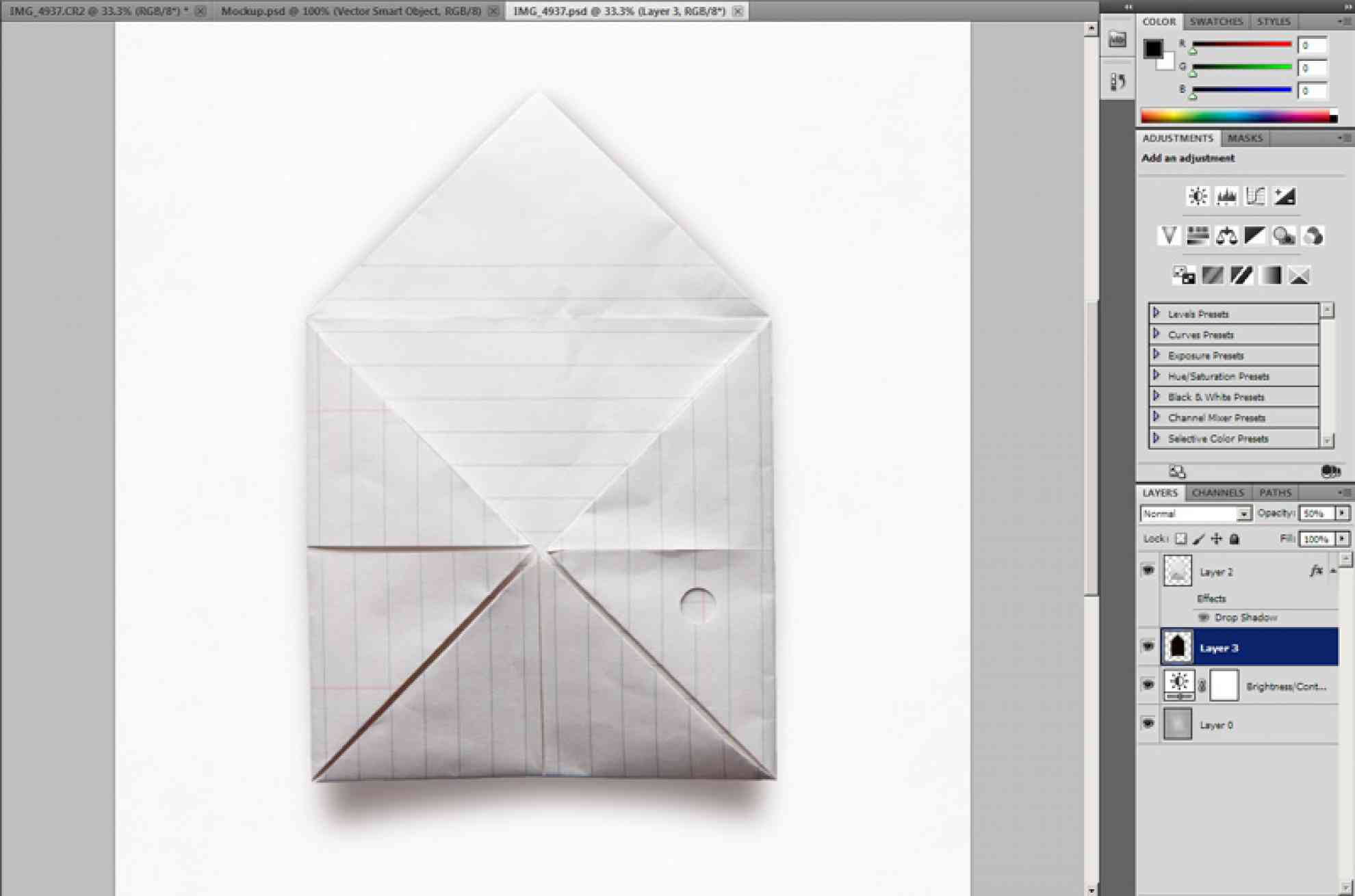 It took about 30 minutes of fooling around to get something that I could drop into Mockup #2: 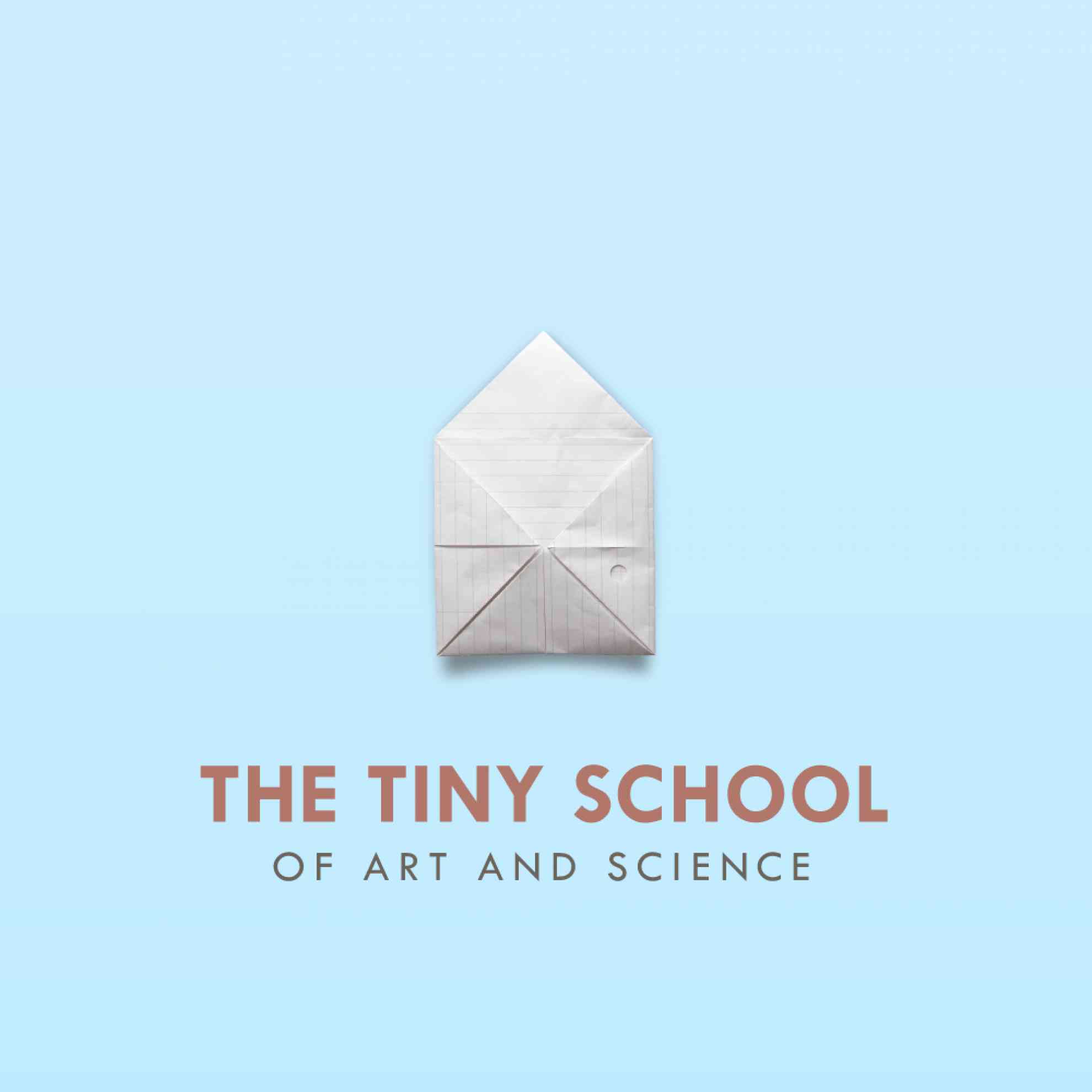 Hrrmm. Nasty spacing issues aside, I had a lot of trouble making the white dreamcatcher work on a white background. I tried a number of different background colors before going with a sky-blue gradient (it’s very subtle, intensifying toward the bottom) to suggest the “open sky of possibility”. However, it just didn’t work for me, and the colors reminded me of a baby product oozing brown type. I don’t know what I was thinking.

Not wanting to use a dark surround for the background, I needed to change the nature of the subject. A piece of colored origami paper would work, but I didn’t have any. So instead, I tried coloring the triangles in Illustrator, using gradients to suggest the folded paper qualities: 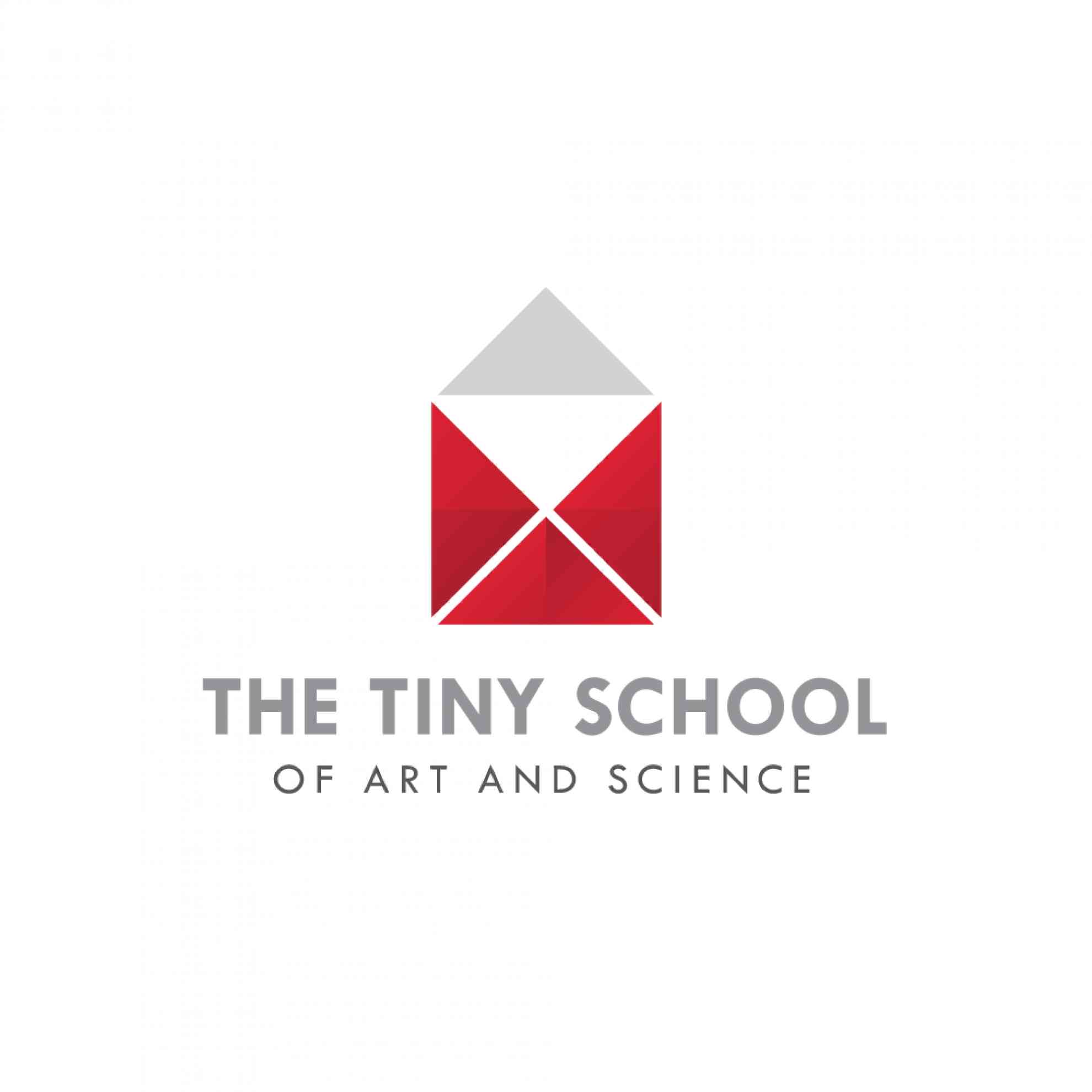 This has some positive qualities. I found the red + gray surprisingly attractive, and the gray triangle on top creates closure for the gray type on the bottom. However, I found the look of the folds of paper distracting, as they are the most attention-grabbing detail of the logo. This de-emphasized, I felt, the “small house” shape of the logo, which I think is more important. Overall, this draft also reminded me a bit of the Hong Kong Bank logo tipped on its side.

Remember: When in doubt, simplify: 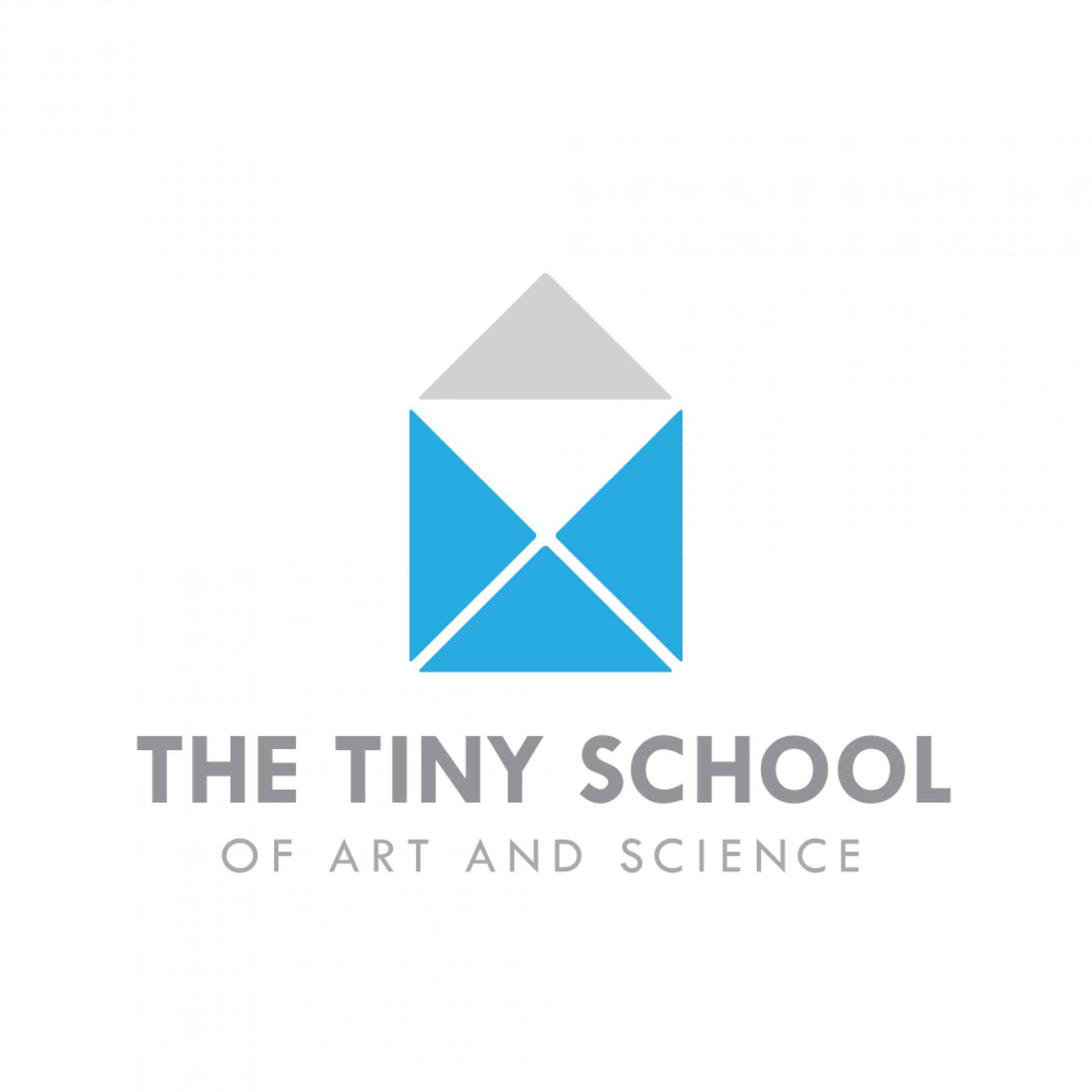 I decided to switch to blue, which is a calmer color. It’s still bright and cheery, despite being slightly subdued; as a bonus, it’s one of the default swatch colors in Illustrator, so I know it will print well.

I rounded the points of the triangles to make them less aggressive, and made final adjustments to color balance between the two lines of text and top triangle so there are two visually distinct groups: logoshape/name and gray triangle/subtitle, that are interleaved with each other. I think this helps the logo elements bind together as the viewer looks at it.

Lastly, I fixed the kerning of the type so it’s maybe 95% good; there’s something still bothering me about the spacing in SCIENCE, the TH in THE, and the OOL in SCHOOL, but I got tired of my contact lenses drying out while attempting to perfect the letter spacing. For a finishing touch, I made sure the most of the implicit construction lines—for example, the angle of the top triangle’s “roof” intersecting with the ends of “The Tiny School”—terminated within the figure. It’s not perfect, but it’s close enough to give a sense of cohesion to the overall design.

At this point, I was aware that the original dreamcatcher idea was no longer obvious. I had liked the dreamcatcher for its symbolism of recess hijinks and the symbolism of having one’s wishes fulfilled. In its new incarnation, the logo form tells a slightly different story:

With the accompanying text THE TINY SCHOOL OF ART AND SCIENCE, the house interpretation is (hopefully) arrived at more immediately. And the playfulness of that interpretation combined with the precisely-positioned geometry is a decent metaphor for “ART AND SCIENCE”, working together…

This is acceptable to me, and since I’m both designer and client, I approved the design and established guidelines for its use. I’m a big fat cheater! :) 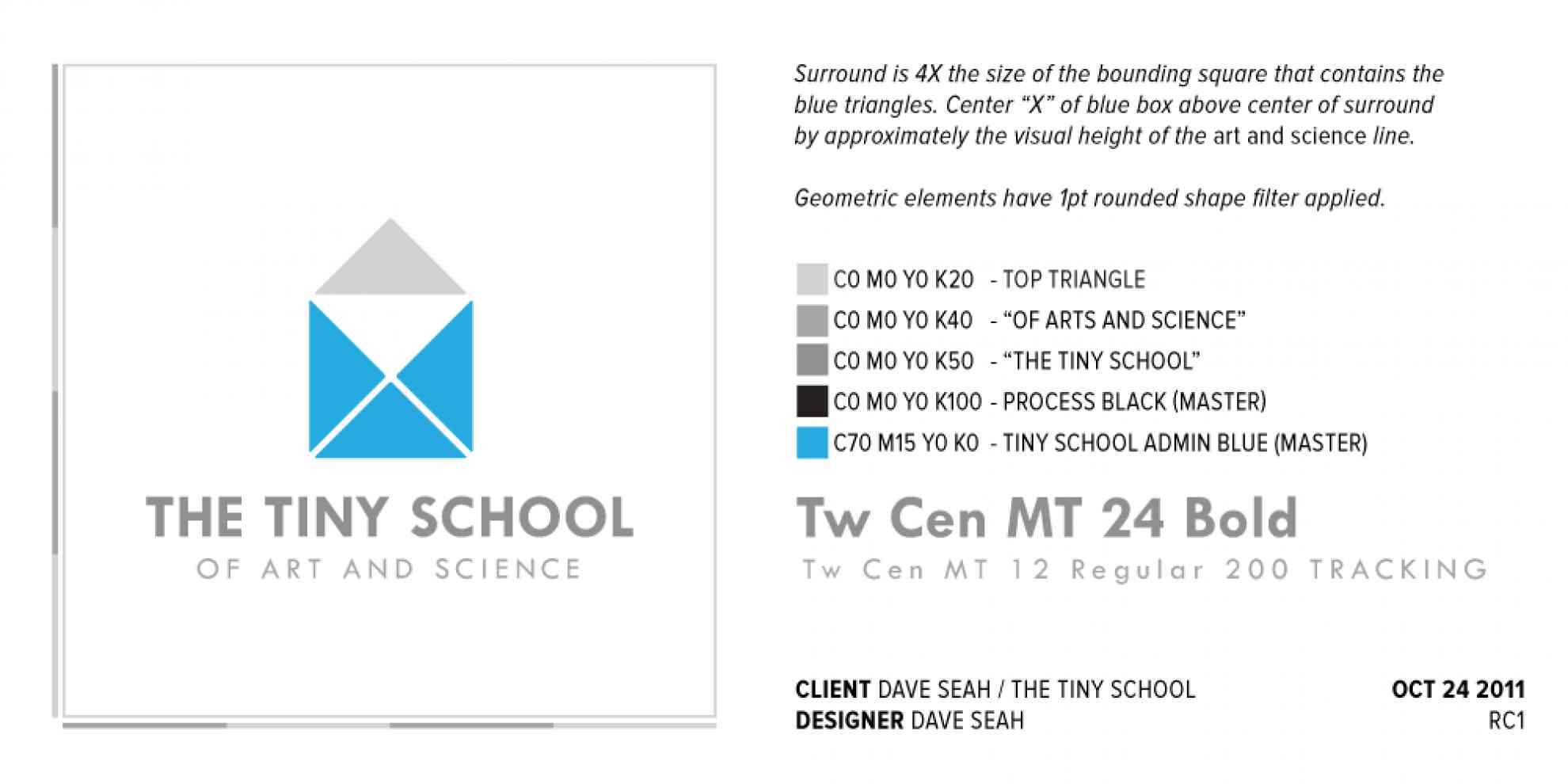 I think this design will be flexible enough to form the basis of an identity system for the various subdisciplines that The Tiny School may offer. I’m particularly excited about making tiny square envelopes that look just like the logo for the tiny diplomas, and I’d like to construct a literal diploma mill that dispenses certifications with the crank of a handle. That would be awesome.

While it’s a simple logo, with a motif that’s been used a million times before, it arguably fits the identity for the school. So I’m calling it done. I just popped the logo into one of my cheap-and-easy WordPress Network sites at thetinyschool.com, and have started writing copy on-the-fly.