I went to sleep earlier than otherwise would have, though I did start reading Daniel Pink’s “Drive” for a bit last night in bed (yay Kindle!) On my mind was the curious feeling of non-productivity I had all day Friday, coupled with a lack of motivation to actually do something about it. The day ended up being semi-productive…a lot of puttering and some goofing around, but nothing meaty really accomplished. I guess I like MEATY ACCOMPLISHMENTS.

I got up at 8AM, without an alarm clock, and went through the new-normal prep routine: shower, feed cats, make breakfast, ignore computer, and then get out of the house for Starbucks and a tall coffee. I grabbed a sunny table and hauled out my notebook. I stared at the blank page, and just started outlining the thoughts on my mind as they came out, structuring them on-the-fly. I got a giant ink splot on my finger before 10AM as a bonus. 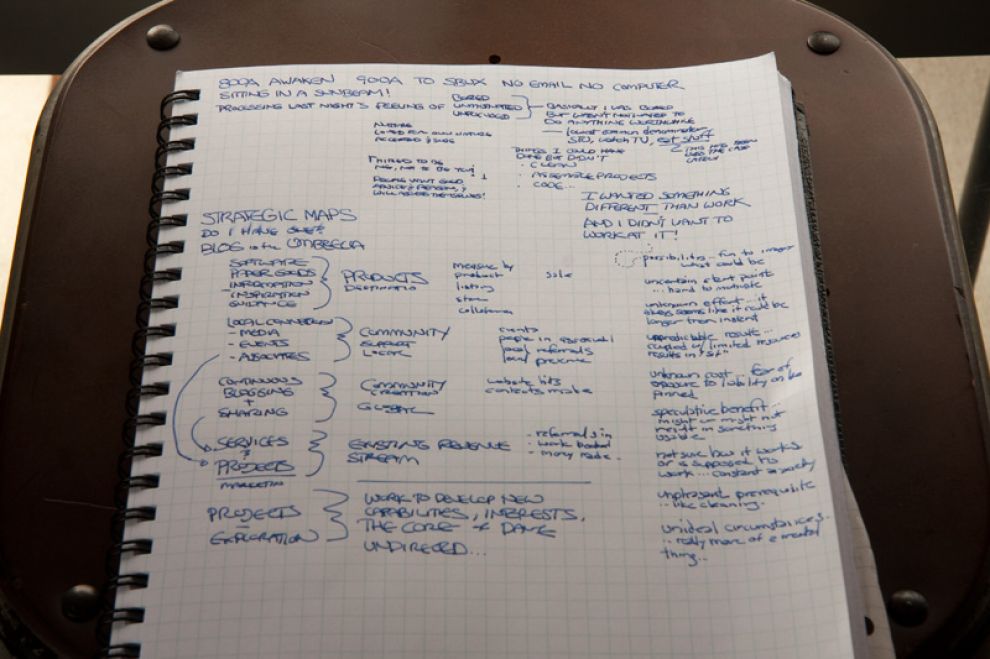 Yesterday, I noted the irony of being bored and yet not wanting to work on any number of self-improvement projects. I might describe my state of mind as pleasure seeking, wanting something that felt immediately gratifying. For me, gratification comes from making things that didn’t exist before; this is not the sort of thing that can be instantly fulfilled. The next best thing is to find something that is just as good. This can be finding a good book, seeing some good design, or reading a story about someone else who’s kicking ass or doing the kind of things I’d like to be doing too.

The state of mind I was in might be some kind of low dopamine state. A quick google brought up this article on livestrong.com regarding causes of low dopamine levels, which lists a number of interesting correlated symptoms:

None of these sound like causes to me, but it’s interesting to see a convergence of symptoms I associate with myself with this mysterious dopamine thing. If my brain is structured with fewer D2 receptors, then I just have to invent a way to work with that. Funny that something like chemistry can affect one’s drive.

Anyway, I came up with a few areas that needed definition…a more refined map of my strategic goals, and blockages to working on them. I’m going to work on a diagram for the next couple of hours. It’s currently 10:53AM.

It’s now 11:30AM, and I have a simple text thing laid out in Illustrator that I can expand later. But I want to get some lunch, and also take care of some home chores. So I drove to the Vietnamese market, hoping to get some Banh Mi sandwiches, but they had sold out. I bought some curry bricks for later, and a 15-pound bag of rice, then went home and cooked lunch.

From around 1300 to 1500, I inspected and collated the “Gun Safety Poster” materials, and calculated the cost of fulfillment on Amazon FBA versus Shipwire versus Home Fulfillment. Then I calculated the per-unit cost if I produced larger quantities. I determined that I can’t sell anything on Amazon for less than 9 dollars if I want to make a consistent profit. Optionally, I could list products and then fulfill myself…that’s an entirely different operation, but it’s one that can significantly cut my packaging costs and still make a profit.

I also looked at WP-eCommerce, a plugin to allow me to integrate PayPal into my WordPress site. This technically could allow me to get rid of e-Junkie, which I don’t really like, and costs me $5/month. The one question I have, though, is whether I need to upgrade my SSL certificate for $59 for two years by sending in some personal identification. I think that the check-out capability, as it goes through PayPal, would be secure, so I don’t need to secure my own website. In fact, it might be better if I don’t have that kind of stuff on my site anyway.

Around 1500 (3PM), I feel asleep for a couple of hours. My couch never fails to lull me to sleep. At 5PM I cooked the rest of the marinated pork I had prepared for lunch, and proceeded to play Star Trek Online for a few hours. Mindlessly floating in space! It’s now around 11PM, and I just changed the cat litter and have set up the laptop downstairs at the new standing work desk.

What I find odd today is that I have been puttery-productive, but I am not very happy about it. I think part of this is because the kind of work I ended up doing today was the slow, unsure kind of work where you don’t know whether you’re going to like the answer. Figuring out how e-commerce works isn’t exactly my idea of a good time.

Also, as I get closer to launching this new product, some doubts start to eat at me. “Am I charging too much? I am charging too little? Is the product good enough? What will the real experts say?” It’s eating away at my confidence. Intellectually I know that the way to really find out is to put the thing out there and see what happens: nothing ventured, nothing gained. Plus, it’s good old-fashioned experimentation. I’m doing a small, affordable run. I’m learning how to put these pieces together. I would feel good about it, if I didn’t have so much riding on this notion of being a seller of my own products and designs. It’s kind of lonely work. Again, though, I have to remind myself that this is about making a good business, not about self-affirmation. Affirmation of the type that matters–the ability to finance my own destiny through selling my own products–is the only kind that matters.

With that thought, I’m going to call it a night. I’ve vacuumed the downstairs a bit and tidied the office. I measured the circumference of the IKEA table legs I had, to see if there was a Kee-Klamp part that would fit it (apparently not; the closest is a 1.66″ O.D. part, and the IKEA leg is 1.77 O.D., if I understand what “O.D.” means (outside diameter).

Tomorrow I have a bit of writing to do:

Installing Seller Desktop, the Amazon Tool for managing product listings, before I go to sleep.