The Mutual Exclusivity of Wanting versus Doing 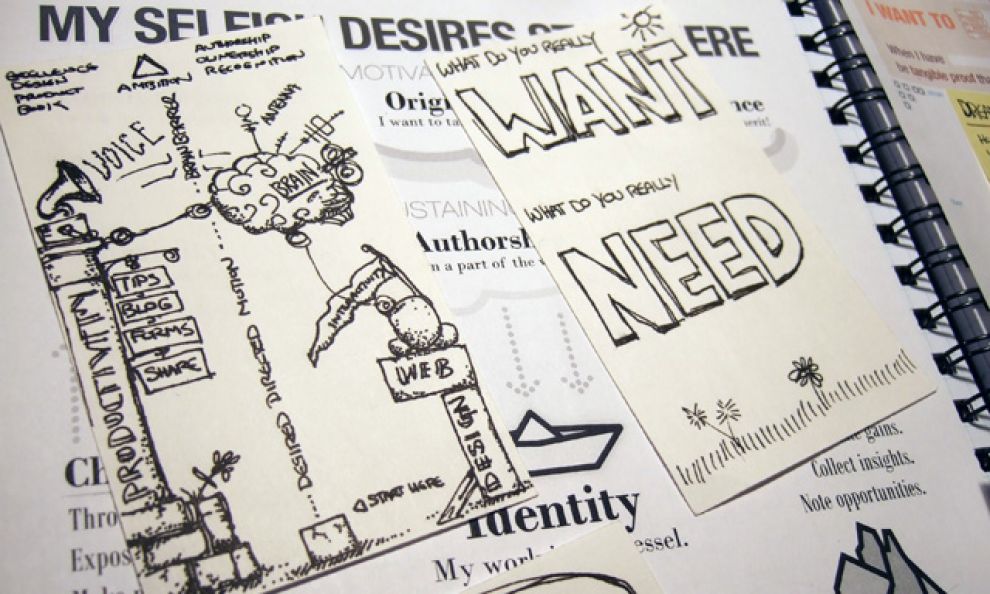 SUMMARY: The deep needs and desires of my psyche are the ultimate criteria for assessing my current state of happiness, but they can also get in the way of actually doing things. In times of battle, they must be suppressed for a time. While my desires are not life-or-death by any stretch of the imagination, they are still pretty damn important to ME. Dreams (and notes) follow.

Having spent almost $100 on printer ink so I could finally print out the Dream Context Tracker, I was excited about FINALLY embarking on my journey toward dream fulfillment. As I stared at the form, however, I realized I hadn’t the foggiest idea what to put in that first box. It was daunting! It was scary! My brow furrowed, wondering if I had somehow missed something in its design.

I decided to switch modes and do some sketching on index cards to see if I could find the blockage. 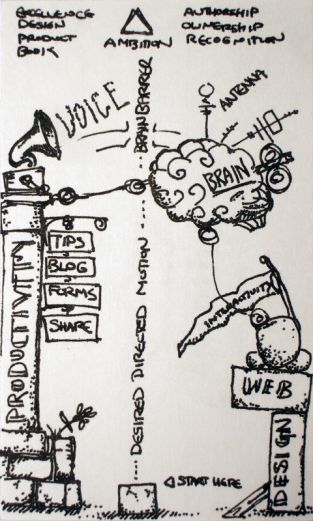 I set up shop at Starbucks and took out my pack of white index cards. Doodling is a relatively new habit for me, as I haven’t thought of myself as someone who could draw the way my buddies can. The key insight is that doodling is thinking on paper, which tends to produce different results than thinking in the dark. Try it: it’s not about producing a finished image; it’s about see what comes out, and what you see in it.

The first card I made started with a triangle at the top (representing aspiration) and a square at the bottom (representing where I’m stuck). At the top of the card I wrote these words:

This wasn’t all that helpful. So I started playing with the block at the bottom. I felt compelled to weather it, because I was tired of staring at it. What would I need to get from this stumpy brick to the soaring heights of my aspirations? I started drawing what stuff I had: the ability to design, create web pages, and script interactivity. Interestingly, it was drawn as an unorderly pile of things, which I suppose reflects my attitude toward them as very basic elements that I am not focused on at the moment. On the other side of the card, I drew a more regular pile of bricks, thinking this would be related to the stuff I have accrued over the years. I had to squeeze in the word PRODUCTIVITY, and to my delight it became a column from which I could hang indicators of what I have done. And because I actively am blogging, I drew a phonograph with the word VOICE coming out of it; this is an asset too! I was struck how this side seemed more organized, though I didn’t plan it that way. The last asset that came to mind, no pun intended, was my intellect. I drew it as a floating brain-blimp, because I sometimes feel like I’m a floating head when I’m in this kind of analysis mode. As the brain was responsible for building my assets up, I tethered it like a balloon to each column, and noticed something interesting: it’s in the way, almost, of a straight shot from the ground to the prized triangle of ambition. I almost wish that the brain wasn’t there sometimes, as it has a tendency to interject its fine opinions just before I’m about to do something, passive-aggressively suggesting that there are more optimal ways to go about such a task. Sometimes I wish it would just shut the hell up.

I shouldn’t blame myself, though, for thinking before acting. I happened to read earlier, however, about the difference between extraversion and introversion, and was struck by the broad implications of a simple pattern difference between extraverts and introverts like myself: My understanding (though keep in mind that I’m not a psychologist) is that extraverts gain energy from doing, and reflection is drains energy. Put an extraverted person in a room by himself, and watch him go crazy from boredom. Introverts, by comparison, gain energy from reflection, and it’s the doing that’s difficult. You can make the generalization that doing = being outside in the world, and reflecting = being inside your head. I know that doing anything outside in the world, including socializing with friends, has an energy cost. I will enjoy myself, but regardless there is a price: I need alone time to process and recharge. It follows that for me to do anything in the first place, I need to charge up by doing a lot of thinking, particularly if the task at hand is unfamiliar. It’s especially challenging if the task requires dealing with people I don’t know. So, it looks like I’m procrastinating because, by comparison to the 60-70% majority of extraverts who gain energy by acting first, I am procrastinating. Our society tends to put a lot of emphasis on doing first and asking questions later, there’s an implication that the opposite approach is wrong. However, if it is the way that we introverts get going, I shouldn’t feel bad about it. 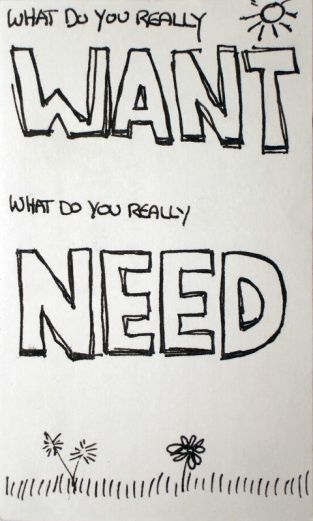 With that out of the way, I felt better, but still didn’t know what I was going to put in the box on my Dream Context Tracker Form. So I took the problem outside of myself and pretended I was talking to someone else in the same bind. There are two questions: what do you want? what do you need? The thoughts that came to me were highly personal and emotional, and so I will keep the specifics to myself. I will say, though, that they were not simple desires to be granted overnight. Because of this, they did not provide meaningful focus because they did not specify a useful direction for exploration. Instead, they just described how I wanted to feel, and how I would recognize that I had attained it. Very difficult to write a specification for. If this was a client situation, I would have to start suggesting a lot of different ideas and influences to try to narrow down the area of interest. I could use external resources (magazines, self-help books, other blogs) but I always try to find the answer inside myself first. I believed in this case that it was there, somewhere. So, back to the problem. Perhaps the direction was implicit in what I had already done? According to the card I’d just drawn, I had the ability to design things, the ability to share ideas through words and images, and a floating brain. I could certainly construct some kind of device, but I still had no way of knowing if it was the right thing. As I applied my dream criteria to each path I could take, none of it resonated strongly. Sure, they were all possibilities, but none of them felt just right. Impasse. So I gave up and skipped to the next card.

What can I DO?

This may be a male trait, but when I’m impatient I want to know what to do. Since I’m an introvert, I also want to know why I’m doing it too. This can sometimes be a source of delay, so years ago I stole a page from the Extravert Playbook: doing first and observing later often provides new data that can shed light on a problem. 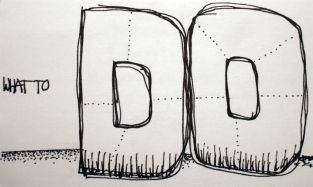 So I acknowledged this by draw a massive DO on the next index card, which dominating the 3×5″ space with its weight and mass. But again, I was stuck…I didn’t know WHAT to do. How could I choose something to do that was not completely arbitrary? This was frustrating, but the voice of reason interjected: any of the arbitrary things I chose would take me a little closer to my goals. If I make something that is excellent, for example, it contributes directly to my dream of pursing excellence itself. If I write a blog post, I’m creating content for a possible book. Anything I make that I attach my name to helps create, to borrow a phrase from Paulo Coelho, my own personal legend. So what was getting in the way? The only thing getting in my way, I realized, was my own desire! Instead of driving me positively toward my goal, the twin terrors of NEED and WANT were back seat drivers, feeling entitled to interject their doubts about the way we were going and how we were doing it. It reminded me of the time I watched a number of executives fret about “losing the light” for a commercial that was being shot, while the camera crew sat around and drank coffee for an hour. The executives (and myself, I must admit) gaped in wonder when the sky had darkened just enough to show its most beautiful colors, which balanced perfectly with the portable lighting the crew had already rigged. A few minutes later, the shot was in the can, and we non-camera people learned something important about not being a pain in the ass. The ability to suppress one’s deep desires, wants, and needs for a time, I think, is one more key to unlocking one’s ability to focus. It seems obvious in retrospect: put your misgivings out of your mind and focus on what you’re doing, which is advice as old as the hills. For those of us, however, that are trying to build our own way forward, this advice is associated with the pain of being under the yoke of someone else’s crappy system. We forget that we are just as capable of giving bad advice to ourselves, as anyone else.

I believe there are TWO “What I Want/What I Need” cards:

The Task Card: This is the more practical aspect of the dream, which is based on your intellect understanding what needs to be done to move closer to the dream, which is now safely out of the way. You can think of “want” as the strategic goal, and “need” as the tactical goal. Know that ANYTHING you can come up with is likely to move you forward, so if it makes sense given your available resources and anticipated needs, go for it. Relax about the dream…it’s safely tucked away in your heart, available at a moment’s notice. Just don’t take it out while you are on-the-move, because it will just complain about how we’re not there yet, ask when we can take a break and do something that seems more dream-like, and otherwise be a constant source of second-guessing. The dream card is the most important card, but its strength lies in telling you if you’re going in the right direction or not, whether you’re warmer or colder. Using it as an active guide, paradoxically, doesn’t work because it is perhaps too sensitive, jumping and leaping at every possibility and every setback. 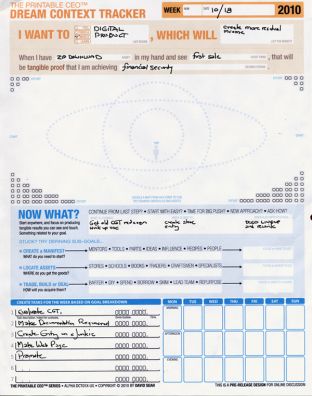 And now that I’ve made the distinction between these two types of dreams/goals, it’s a lot easier to just pick something that I know needs to be done. I scribbled down a long-dormant task, just one, and will use the sheet as a tracker this week. The sheet does not contain the entire dream; that I am keeping in my metaphorical wallet to look upon every once in a while, to remember why I’m doing all this stuff in the first place. I’m also going to try to do one thing at a time, for once, because I want to be extra mindful of it. We’ll see how it goes.