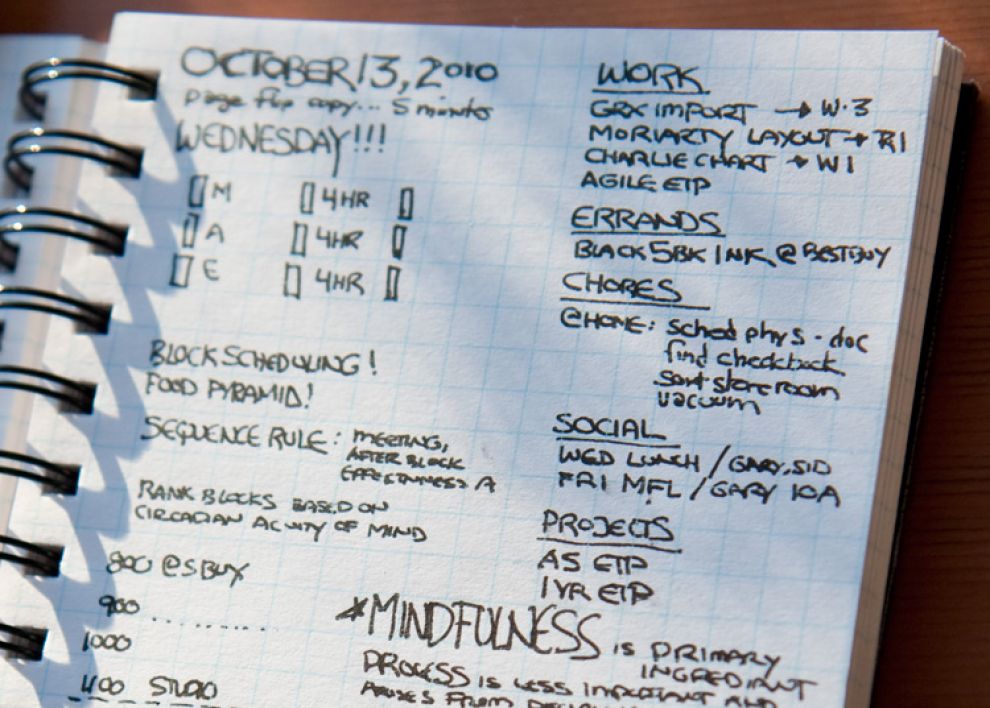 This is a continuation of The Day that Almost Was, which is turning into a series on rebuilding my rituals.

Yesterday was a day devoted to synchronization of my schedule with the rest of the world. My schedule had been crazy before, 4-8 hours of wakefulness followed by 4-6 hours of sleep. As you might expect, it became very difficult to predict when I would be awake and when I would be asleep. This is the schedule I tend to fall into when I’m doing any kind of computer programming. This time, though, I was paying attention to the contextual factors that might be contributing to the sleep pattern:

p>Anyway, I managed to tire myself out by not getting a lot of sleep the night before, and staying up until midnight. This is perhaps the only time that the online TV watching service Hulu has helped me wake up early; by catching up on episodes of Fringe and Bones, I was able to stay awake long enough to go to sleep at a “regular” time. Was up at 7AM! Wow!

Last night I also discovered something: turning off the air filter makes it really, really quiet. And it’s actually kind of nice. I have hairy cats that are constantly generating clouds of dust and fur, so I keep air filters running constantly in several rooms of the house. For some reason or another, I turned the one in my bedroom off, and when I awoke I felt much refreshed. I also noticed just how quiet it was. I didn’t think the air filter was that loud, but it was a subtly and sweet difference. Perhaps I can put the thing on a 24-hour timer, and when it shuts off it will remind me of sweet, sweet slumber.

This morning at Starbucks, I experienced a moment of irritation at having to copy the ToDo items from yesterday to today’s page. The problem: I had to flip back and forth between pages. For about fifteen minutes I brainstormed ways to get around this problem, considering solutions like maintaining a small notebook for todos and using the larger notebook for the dailies. This had the drawback of adding another notebook, but perhaps if its role was VERY CLEAR, it would work…but then some of the thinking from yesterday surfaced: come on, how hard is it to flip a page back and copy it? So I tried it, and it didn’t suck as much as I thought it would. Page flipping is a pet peeve of mine in information design, so I try to avoid it as much as possible, but in this case I think it’s actually OK: you don’t need the big picture all on one page when you are just transferring a few action items at a time. And it’s especially OK when you’re mindfully picking a few things at a time to transfer. It’s actually a good thing. Who’d have thunk it?

While I was doing this, I had an idea for a refinement for the Emergent Task Planner based on the way I’m scheduling my day. I had sorted my tasks on-the-fly into Work, Errands, Chores, Social, and Projects. I wrote the one that was foremost on my mind first (Work). I wasn’t exactly sure when I would do all these things, but I knew I could stuff them into one of three time periods: morning, afternoon, and evening. From my previous musings on productivity synchronization I knew that certain time blocks were likely to be useless for focused work, and without thinking I assigned an ENTIRE TASK BLOCK to it. Which is very interesting because it simplifies the scheduling process while also introducing the idea of “intended balance”.

I still have to print out the Dream Context Tracker. While I did buy printer ink yesterday, it turns out I was out of the big black ink, not the color ink. Damn!

I want to have today be mostly a work day, but I have a Social block scheduled at noon. From past experience I know that this wreaks havoc with productivity afterwards for the same amount of time spent being social (it’s draining for an introvert like myself, even when I am enjoying myself). I’m going to pay attention to how it feels afterwards; I’m thinking that maybe some meditative thinking afterwards could reduce the recovery time. We shall see.