The Day that Almost Was

After yesterday’s post declaring my own selfish intentions to myself, I was both excited and nervous about starting the day. When I’m about to embark on a new direction, I have the tendency to want a day that sets the tone for the entire journey; I enjoy my small superstitions.

Although the day didn’t go according to plan, on hindsight it did set the tone: there’s going to be a LOT of work, but it is not necessarily going to be hard if I’m truthful and mindful of what I’m doing. This post is a record of the foundational work I’m doing to engineer an improved daily routine.

I have a standing bi-weekly coffee meeting with my friend Gary, who is one of those super-capable self-made persons working from a set of very strong core principles, and during our get-togethers we talk about what’s on our minds for 1-3 hours. I’d gone to sleep around 6AM the night before, finishing the Groundhog Day 10/10 post. Our intense conversation wiped me out, so I went back to crash for a few hours without planning the rest of the day.

I awoke from my polyphasic slumber, my first thought to plan out the rest of my day. However, I wasn’t sure what to do first. And, despite my enthusiasm for being on a new path, I felt curiously resistant to the notion of writing in any of my existing notebooks. A problem, this is.

I explored the feeling, and tagged it as a form of apathy or disconnection. It makes no sense to the left side of my brain, but nevertheless I felt the resounding MEH-ness echoing within. When this happens, I have a choice: I blow off the day, or I turn on the ole’ analytical engine.

Identification of the Feeling:

I feel listless and recalcitrant. Listless in that my body is not pumping with energy, and recalcitrant in that I am being slightly stubborn about not wanting to do anything without a real cause. The listlessness I could probably deal with; it might be from blood sugar levels, hydration, or the ancient glasses I’m wearing. To confirm, I contemplate the way my body feels, and compare this to prior patterns of tiredness: blood sugar is probably a little low (haven’t eaten in a while, just waking up) but are within operational parameters. I am pretty dehydrated, yes, which I know from a combination of knowing what I’ve been drinking (nothing) and that the thought of drinking some water doesn’t turn me off. I don’t usually think of drinking water until it’s well-past the time I should have had a good 32 ounces of the stuff. As for the glasses? I’m squinting at a computer screen, and it’s giving me the beginning of a headache.

First things first…let me try to get past the eyestrain, ignoring the blood sugar/hydration issue for now because they aren’t major problems.

Perhaps if I relax my eyes and shoulders, then type with my eyes closed, I’ll do ok.

After taking the glasses off, I realize that there’s a piece missing from the nose bridge that’s uncomfortable. Shoulders purposefully relaxed, eyes closed, breathing deeply in and enjoying the sensation of cool air whistling pass my parched tongue…I hold it, and then exhales. It’s a simple pleasure, and I feel a little better. I’m still not WORKING, but it’s a step.

With the first levels of discomfort and irritability settled, I remind myself of the goal at hand: to break out of my whatever rut I’m in right now, and figure out what to do for today and the rest of the week.

Ah, there is the return of the resistance, and I catalog the unvocalized thoughts:

Apparently productive elements of my brain have unionized and are demanding better management, transparency in decision making, and guaranteed compensation for work performed. If I can’t produce a compelling reason to work toward, the parts of me that actually do the work aren’t going to budge. Fair enough. I also detect other emotions: desires and wants. At the most general level, I want to be “making progress”, and I want to “have something to show for my effort” that “pays off”. In other words, my inner goals are the same as those of Dave Seah Local 405: I want to be in a better place, and I don’t want to waste my time on speculative work. Time to apply a change in focus: shifting from what we don’t know to what we do know.

I recognize I’m in a new experience situation. Although millions of people have undertaken the entrepreneurial steps to achieve success, I haven’t done it yet. It’s new to me.

From Engineering, I know that it’s dumb to try to optimize something you haven’t done yet.

I think both management and production are in agreement on these principles. Perhaps it’s time to apply a bit of Genchi Genbutsu and dissolve the boundaries between decision makers and production workers.

This is a first step scenario, and we’re locked up. The choices are many, but they’re abstract. Trying to choose the best first step is another example of premature optimization when it’s not required. This is not, after all, a literal life-or-death situation. We just need to pick a step that moves forward; once we’re underway, priorities tend to sort themselves out. So what is moving forward? We can pick a criterion, and the one that’s on my mind is whatever seems the most benefit:

If it makes it easier for people to visualize WHY we should be talking, that’s also very necessary. I do a terrible job of that on my website, so website information architecture is a priority. Now that I’m on WordPress again, it’s much easier to add these features on-the-fly.

If I can make something I can exchange for life-sustaining cash, that’s also beneficial. It also creates a way of interacting with people, too.

p>Before I got to this place in the analysis, I realize I was using a far less rigorous criteria for choosing what to do next: going with the one I like right now, which evokes the desire to seek interesting stimuli instead of hunkering down to work. Best to proceed on principle, not personal whims. I guess the internal resistance was actually helpful; I could have just tried to push the agenda using sheer willpower, but it would have not uncovered the fundamental problem and I eventually I would have given in to apathy; in fact, this is what had already happened!

The Matter of the Planning Notebook

So I need to be reminded of what my focus is this week, and have some semblance of a planning sheet. What gets in the way of this is not having a good daily ritual (I’m in polyphasic caveman sleep mode right now) and I admittedly feel some anxiety about not having a good information system running at the moment.

AND WHY IS THAT? I am merely too lazy to use it? Possibly.

While it’s true I don’t know what the best system is, I know that having ANY system is better than not having one when you’re trying to start. Having a system at least gets you in the game. I can trade-up as my needs become better defined. So I’ll go back to the basics and write down some stuff in my small notebook: 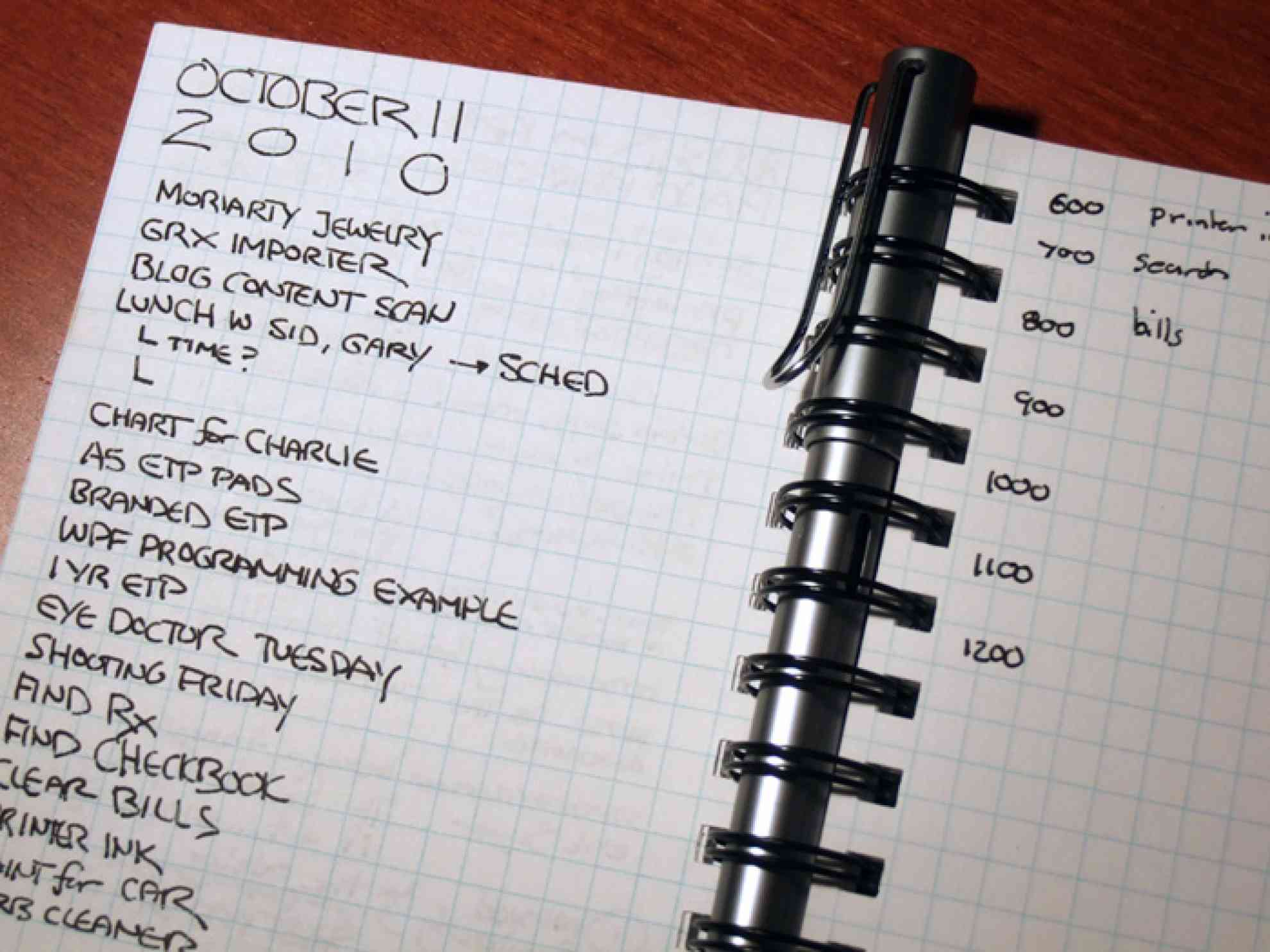 After scribbling things down, I see that there are some time-sensitive items and some important dependencies. I have an eye doctor appointment tomorrow and need to find my new health ID card, which is buried in a pile of envelopes somewhere in the house. I need to also buy some printer ink, so I can actually try using the dream context form. I start with those two errands, figuring I would try to get to sleep around 10PM for once.

The Conspiracy of the Starches

Staples didn’t even carry the ink I was looking for, except in their mega RIP-OFF pack. So I ended up browsing a bit to see what was new, and then I went home via the fast-food takeout Chinese place. Then I fell asleep for several hours in a starch-induced haze, waking up at 2AM. Eeep! Stuff I ate today was probably not conducive to being productive: onion rolls with chicken salad for lunch and dinner, plus the Chinese takeout. I need to swear off the starches and breads, and start exercising, but as Balbuto says: ONE HABIT AT A TIME.

It’s now 2AM, so I have a couple of hours to try to recover the day. I need to at least find the medical insurance card. I hate sorting through physical mail, so I decide to make it a sort-and-file operation. I estimate that it shouldn’t take longer than an hour to process 6 months worth of mail while looking for this card. I turn on my kitchen timer and start…

TOTAL TIME: 1.25 hours. Not bad. If I subtract the 15 minutes of goofing off, I’m actually right on the mark of my estimate. Batching the process made it much more efficient, as did listening to the Israel Houghton and the New Breed album on my iPod to maintain momentum.

After this, I spent some time gathering things I need for tomorrow, and decided to finish this blog post as a record. About 3 hours have elapsed, and it’s now 6AM, so I’m going to catch 4 hours of Zs (or try) and then head to the doctor.