Welcome to Opposite Week! 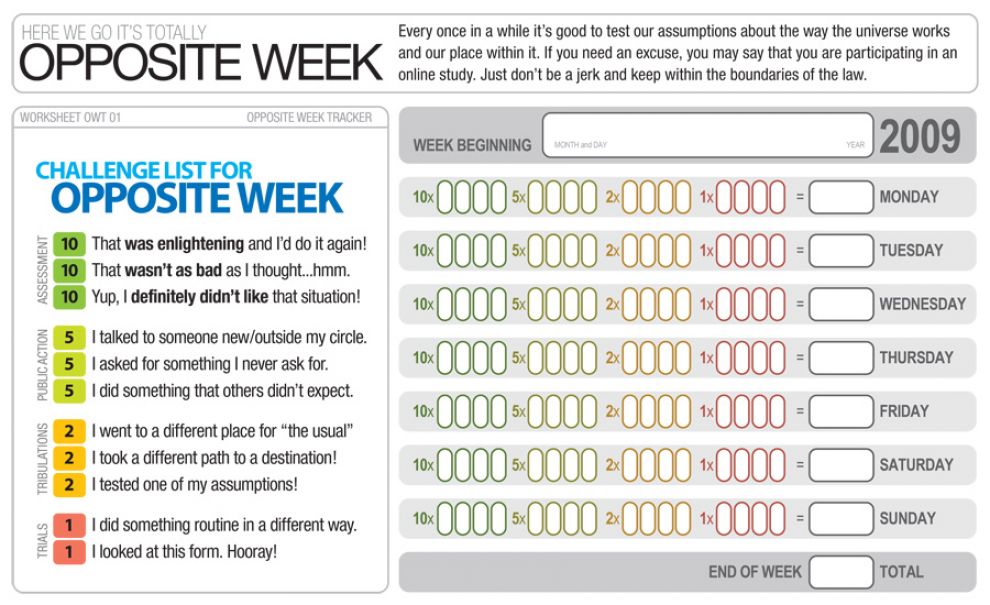 SUMMARY: I decide that a week of testing my assumptions wouldn’t be such a bad idea! [colleen]:http://www.communicatrix.com/

I’ve been chatting with Colleen Wainwright over at [Communicatrix: A Virgo’s Guide to the Universe][colleen], and from amidst the conversation arose the idea of Opposite Week. It’s like Opposite Day, except it lasts a week and the idea is that it knocks you off your routine in a mindful way. I happen to believe that questioning the way one lives and works is pretty useful (helpful caveat: be careful about doing this at your workplace) and I’ve been feeling that I need to do this for some time.

To implement Opposite Week yourself, you need to run yourself through a mental checklist every time you become aware of the need to make a choice or find yourself in a familiar place. The checklist might look something like this:

The point is that our choices tend to self-select our experiences and promote the status quo. It makes sense…if you like the way something is, you tend to repeat the choices that ensure that this pleasant state renews itself. If you don’t like something, you naturally tend to avoid the choices that lead to it. Sometimes, though, we rule out things that we think we might not like, or might be too much work. I think it’s a good idea to revisit the idea every once in a while that negative experiences shape us as well as the positive ones, and if we have a good attitude about it, we might learn something important about ourselves and what we’re doing. It would be stressful to do this every day for me–the idea of eating octopus or eating a clam, for example, is the sort of thing that takes me years to build up to–but once I tried it I found it wasn’t that bad. Wouldn’t do it again, but it was interesting.

To make it easier to keep track I’ve made a new printable form, based on the old Concrete Goals Tracker, called the OPPOSITE WEEK TRACKER. It’s with three levels of challenge, from the very simple to public action. Every time you do something that seems to fit one of the criteria on the Challenge List, fill in a bubble for the day of the week and make a note at the bottom as to what it was you did so you remember. By the end of the week, you’ll get a sense of how things went, and you’ll be able to establish a baseline of “new things” you do mindfully.

If you’d like to play along, download the form, print it out, and keep it by your side for the next week. Enjoy!