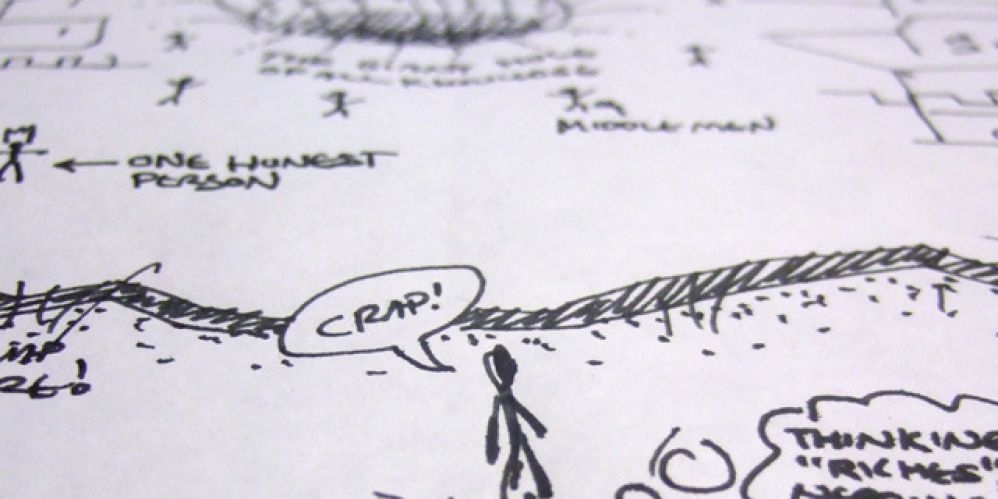 I set aside some time on Sunday to start drafting that master plan I’ve been dragging my feet on. A daunting task! I warmed to the task as I sat at Starbucks, staring at the large piece of paper I had brought for a good ten minutes. Where to start?

My first impulse, just to break the Curse of the Blank Page, was to just draw a triangle in the middle of the paper. This accomplished, I stared at the triangle for another good long time. My coffee, I noticed, had already become cold. Well, I reasoned reasonably, I had better figure out where I want to go. Some glamorous place on the distant horizon that would bring me fulfillment. I drew a horizontal line near the top of the page, frowning slightly at the result, as it seemed TOO distant and perhaps I should have left more sky available, but oh well. Over the next 30 minutes I wrote the following list of metaphorical Five Golden Destinations, which I’ve blogged about in bits and pieces over the past several months.

These are, I think, the most likely sources of future income that feel as if they are aligned with what I naturally do. These are the destinations I am working toward, but how am I going to get there? The next bit I needed is to take stock of what resources I have with which to make the journey. I have three main “powers”:

It’s interesting to note that these are the items that I hope to use to get somehow to the Five Destinations; they are my richest, most plentiful resource, to be used in trade to start a new life in those distant mountains of opportunity. In the meantime, I had a number of trade skills that I can use to sustain myself on the journey:

The Master Plan was starting to resemble more of a vantage point from which I could survey the journey I wanted to undertake. 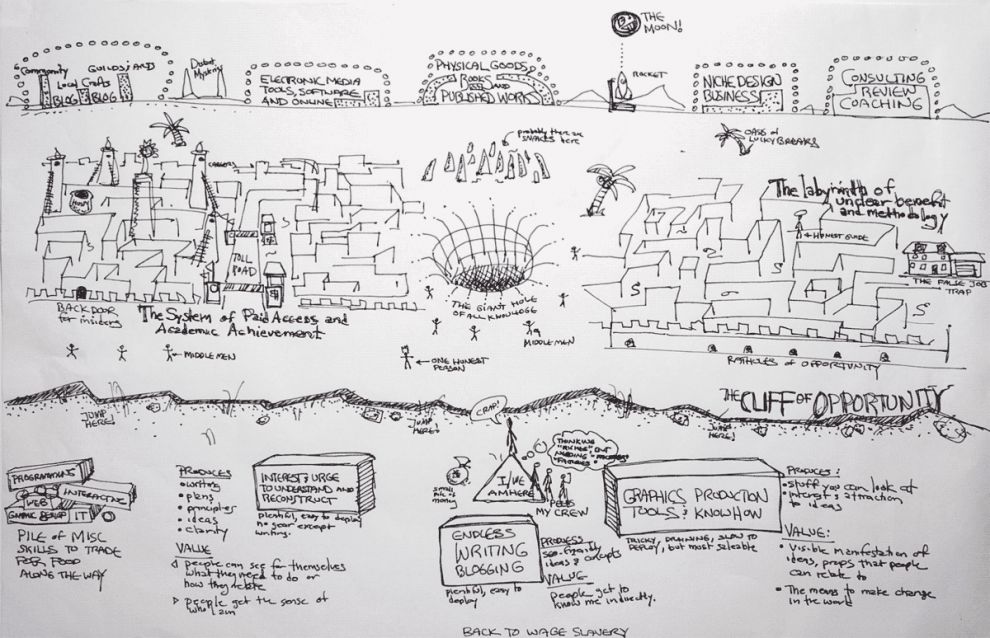 (You can click on the image to see it larger)

The journey looks like a leap from the cliff of opportunity into the desert below. Between the distant destinations and me on the cliff are three main routes:

Although they look like obstacles on the map, the three routes are just places to learn from and gather what I need to make it further toward my goal. I have a presence in all three areas; the real trick is not to get stuck in them. The clarity of having five destinations in mind helps orient myself.

There are other features of the map, such as middlemen, guides, “ratholes of opportunity”, challenging places with pointy rocks that are filled with treasures and snakes (I have a sneaking suspicion that I will encounter my dream woman there), renewing oases, and who knows what else. But I need to figure out how to get from here, through those places, to there…

As I was filling in the map, I drew a horizon and some distant mountains, and realized that actually there are two further destinations:

So this didn’t quite come out as a master plan in the way I thought it was, but I think it’s what I needed to see. I have it hanging on my wall right now on a piece of foam core, and because it’s drawn in a way that implies movement from where I am now to where I want to be, it’s creating a draw. I’ll have to take another pass at a more detailed master plan tomorrow; perhaps a specific game plan for just reaching ONE of the five destinies, and then put that into action.