SUMMARY: Last week’s journaling of my day culminates in a color-coded graph that might help me see certain patterns in my day which either contribute to productivity or sap it away.

where we last left off…

Friday started with another late morning. I made it out to Starbucks past noon, after spending the late morning looking up random things on the Internet. I was able to spend a couple hours working on my website design. The typical design startup jitters presented themselves: first, I started in Photoshop but switched out into Illustrator because I realized my design head was dealing with an information hierarchy based on text, not images. Photoshop’s text handling, while much improved over the years, still is not as fast or convenient as Illustrator. If it was a VERY text-heavy design, I would probably have gone one step further to InDesign. I should see if there is a color picker plug-in that addresses that issue. I said hi briefly to a few people I knew.

At 4:15PM I packed up and headed to the movie theater to meet up with my friends to see District 9, the new sci-fi movie produced by Peter Jackson’s company. It was a fairly long movie, clocking in at about 2 hours, so it was around 7PM by the time I got home. I spend the rest of the evening chilling out, accomplishing nothing in particular except watching a lot of TV and a few animations. I felt bad about this. There was no creative juice in my head at all. Perhaps the movie had put me into a reflective mood. I also got a few packages in the mail, which was nice.

The rest of the weekend was unproductive, filled with thunderstorms and a couple of social gatherings. Interestingly, I found that the acute awareness of how I had fallen behind from my idealized production schedule, which at the time didn’t even seem that idealized, merely led to a feeling of greater and greater unease as the week progressed. Even activities that were planned weeks in advance, which I was looking forward to, were drained of joy.

For those of you who have put up with the tedious details of my life last week, here’s the payoff: a grid of tasks that shows what I did. The idea behind all that liveblogging was to gather enough task data with context so I could make some more informed guesses about my productivity. 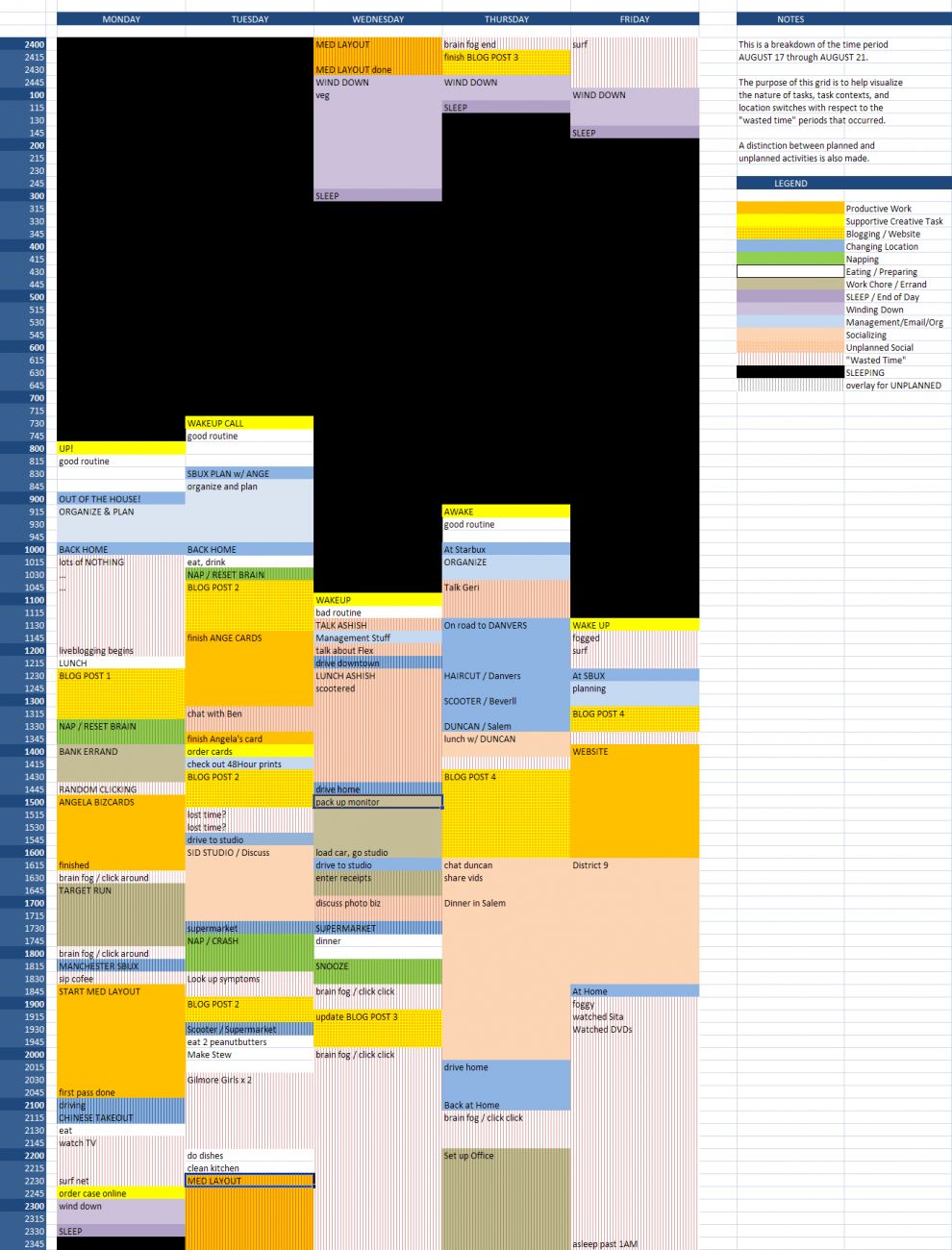 The tasks break down as follows:

Anywhere if you see vertical stripes running through anything, that means the task was not planned. Additionally, blog posts are marked with a combination of yellow and orange, because they’re indirectly productive.

So what do I see?

Not shown is the feeling that I had on Thursday and Friday that I was falling very much behind. This is manifested on Friday evening as a huge block of listlessness.

This week I’ll take my time reporting to the Emergent Task Timer and modify it to indicate the type of task somehow. I also feel the need to radically simplify by reducing the number of social interaction blocks and location changes.

what am I missing?

I’m perhaps too close to my day to really see what’s going on, so let me know of your grand schemes, theories, or relatable experiences. I logged a lot of the context behind these tasks in the Monday, Tuesday, Wednesday, and Thursday blog entries, which may be helpful in seeing the larger patterns.

It’s lunchtime now, and I’m getting sleepy AND hungry. I better get up and go for a walk.