On the second day of arriving in Taiwan, my sister and I had a chance to flip through two local newspapers over breakfast, the English-language Taipei Times and the Chinese-language Liberty Times. The English papers are rather thin, serving an audience that I would guess consists of foreign expatriates and local Taiwanese who are studying the language.

When I used to live here as a foreign brat, I could never pin down what exactly was missing from the English papers here until now: there’s not much real analysis, and the surface presentation of data is rather thin, which makes home analysis more of an exercise in conjecture. Also missing are the pages of local commentary by knowledgeable community historians/busybodies. What is most striking, however, is the lack of advertising. The China Post, which is another English-language paper, may have more ads as they claim to have a circulation of 400,000, but I have not seen an issue in years. Anyway, check out this spread from the Taipei Times…it is eerie in its cleanliness: 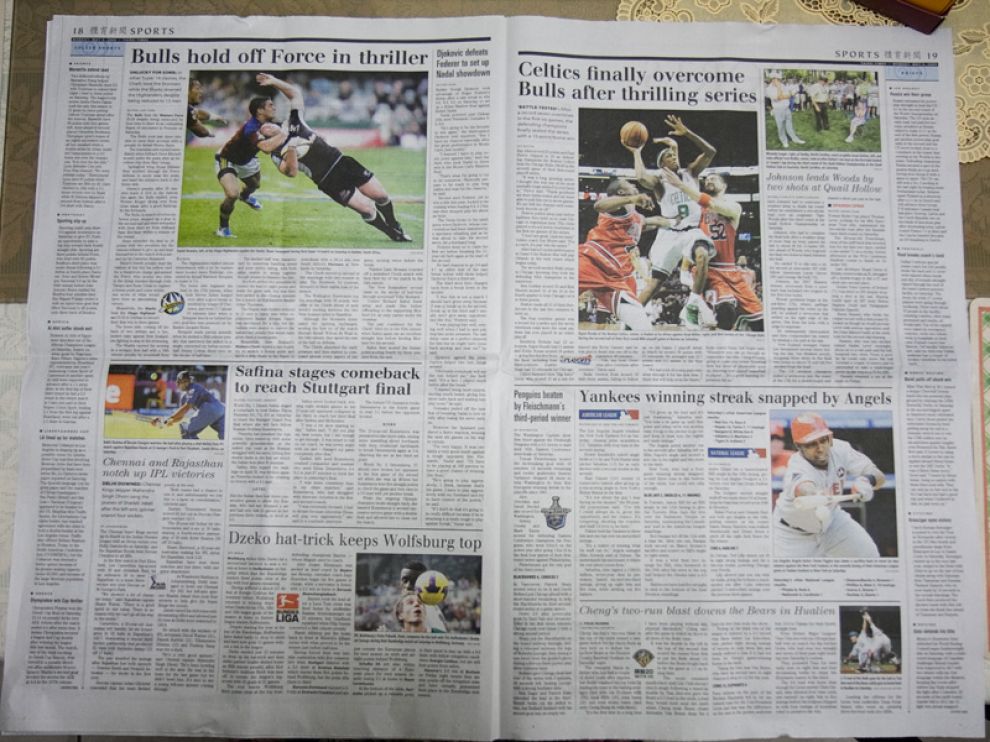 The entire paper is like this, with the exception of a few hotel ads and a handful of classifieds in the back. That’s what makes the paper feel unreal, because there is no sign of local commerce or community talk-back.

I started to wonder if the regular newspapers in Taiwan were largely supported by a subscription model. Considering that the whole of Taiwan is just a little larger than Massachusetts with a far-greater density of 24 million people concentrated along the western coast, perhaps distribution and demographics create a favorable economic climate for subscription-based media? I’m unqualified to say, but I’ve been noticing just how greater the density of people is here in Taichung compared to the typical US suburb or even medium-sized city, and the scores of tiny shops offering goods and services are apparently able to survive with whatever foot traffic they receive. Density of human traffic is one of those mysterious business factors that I’ve been thinking of a lot recently as I’ve been pondering my own business maneuverings; being in urban Taiwan has reawakened my interest in the subject. But I digress.

I can’t read Chinese, but I found it interesting to try to visually compare the Chinese-language Liberty Times to the Taipei Times. Here’s an inside spread of the Liberty Times: 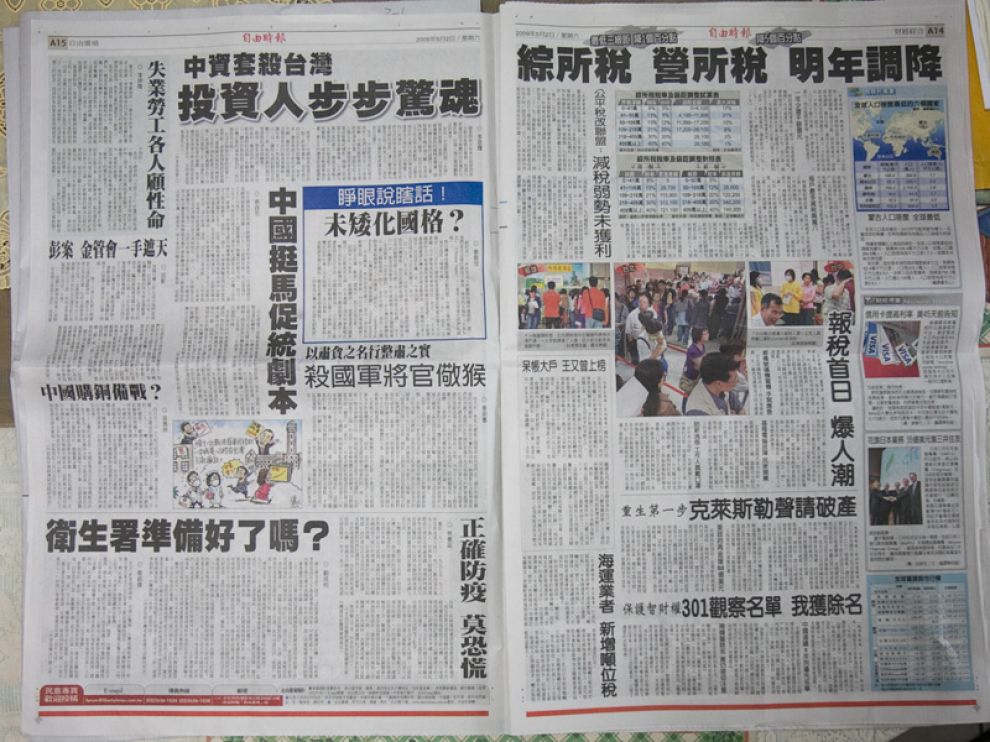 I can’t read any of this so don’t take what I’m saying as authorative, but it’s notable that the Chinese language layout allows for multiple headline directions. Not only can they be read vertically, a headline can also be laid out horizontally. Body copy can be formatted to read left-to-right or right-to-left, which creates the opportunity for really interesting layout possibilities. I’m going to keep an eye open for examples of this in other media.

The information density of this page is much higher than that of an English-language paper, because each character is a word. The Chinese characters are larger than what a single letter would be in an English-language paper, which reduces the comparative density advantage, so I’d say that the information density is maybe 2x or 3x. I don’t know why that’s interesting to me, but it is.

Dad had a couple other competing newspapers in the house, and they look a bit different due to the choice of different line lengths and font weights. I snapped these pictures quickly out of what I think are weekday editions of each paper: RSS readers: the small thumbnails won’t be clickable in your feed reader, so you will have to visit the website to see the larger images. 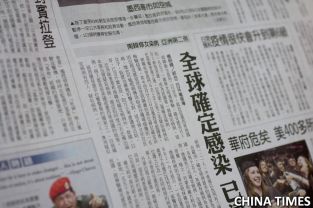 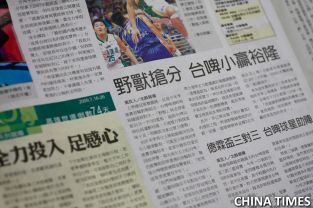 The China Times is another of the major newspapers in Taiwan, and it has a somewhat looser and spacious spread, with increased white space between rows of characters, and seems to favor longer-flowing character lines in their paragraphs. Each page also seems to have a “visually dominant character direction”, either horizontal or vertical. The overall result is a more tranquil feeling to my non-comprehending eyes. Dad says that the China Times is politically right-leaning in the Taiwanese political sense, and is one of the oldest newspapers. Perhaps the design is friendlier with an older constituency with fading vision, or the look is deliberately “traditional”. 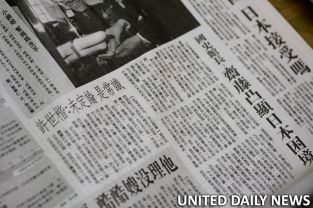 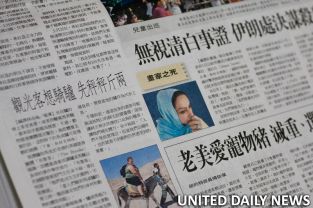 The other newspaper, The United Daily News, uses a layout that feels “chunkier” to me. I think this is because there’s less space between character lines, and the lines seem slightly shorter than what’s in the China Times. The character font seems a little heavier too. Dad says that this used to be a military newspaper, and it’s even more right-leaning than the China Times. 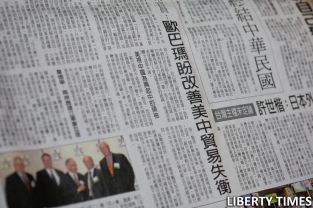 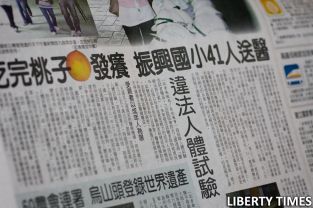 The Liberty Times, by comparison, seems to allow headlines to run both vertically and horizontally on the same page. The other two papers seem to avoid combining directions on the same page (though not entirely). The Liberty Times also seems to use more font weights, providing an intermediate step of visual contrast that I find appealing. According to Dad, the Liberty Times was the first to use of color in all its pages, and the other papers are playing catch-up. If I had to pick a favorite purely on visual style, I like the layouts in the Liberty Times a little better for the dynamic feeling I get from their pages. I have no idea if it plays havoc with readability; perhaps an Asian graphic designer will let us know. Dad also comments that the Liberty Times is pro-Taiwan independence, a subject close to his heart, and that makes it a left-leaning newspaper. It’s the one he likes to read, though he keeps tabs on other papers.

Like papers in the United States, the weekend editions include a lifestyle section or supplement; this is a quick way to see what’s similar yet different. Here’s a couple excerpts out of the Taipei Times: 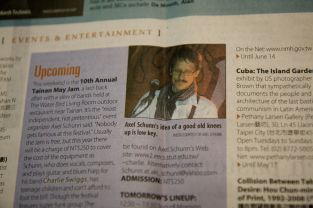 One has to remember that the English language audience is international, and expressions like “a good knees up” slip into the articles. I have no idea what this means, but I gather it’s good. 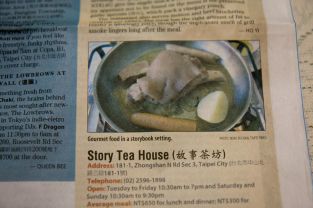 Then it’s always good to see restaurant reviews that are open-minded about the specialty cuisine that’s available here. You’d never see a review like this in the United States, but this is a different land. I wonder how the Taiwanese papers review western food?

Moving on to the Taiwanese newspaper’s classifieds section, Emily found a series of women private investigator ads. She’d also seen these ads on the back of public buses, and we wondered if there was a reason behind these women-run detective agencies. 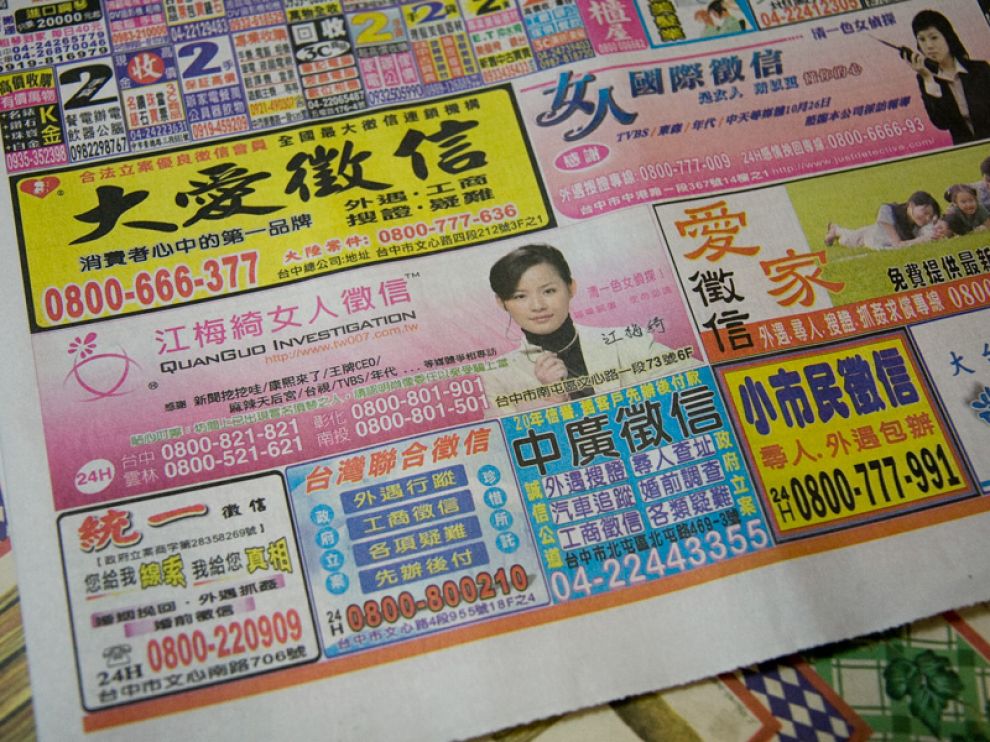 We asked our cousin June, who practices international law in Taipei, and she said that the women are hired by wives to check up on their philandering husbands. The women PIs are considered to be more observant of small-but-critical details, more insightful, and far more discreet than your typical blundering male.

The lifestyle sections are also pretty awesome, at least in the Liberty Times. This article appears to be about some kind of fanciful confectionery or cake: 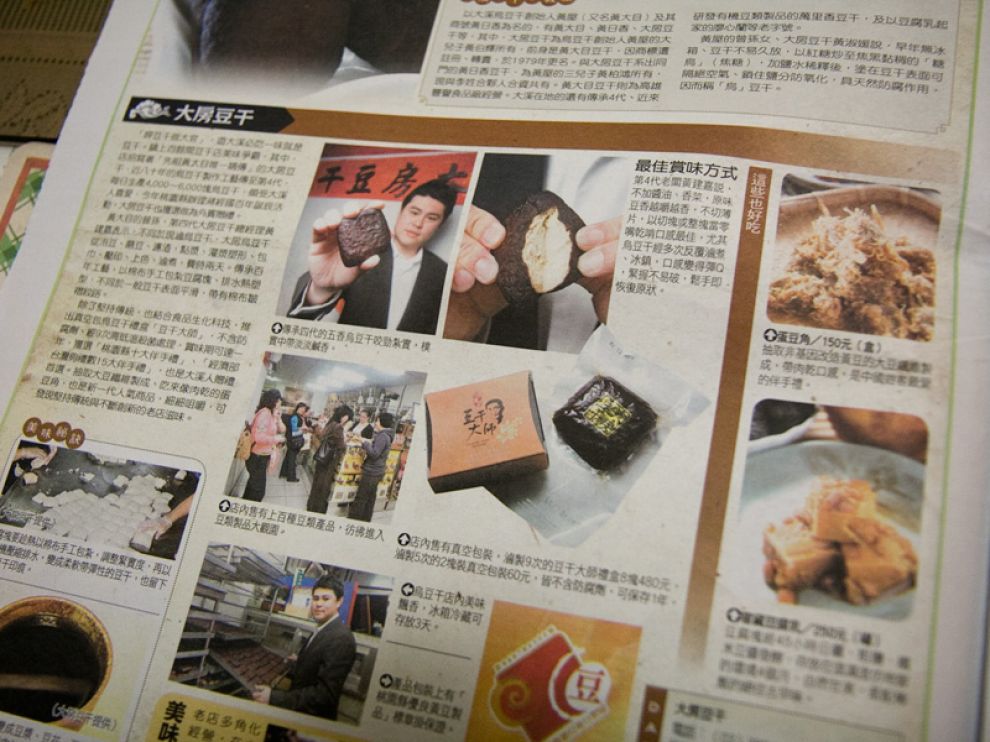 I’ve been noticing on this trip just how advanced cake- and confectionery-making have advanced in the past 10 years. Taiwan has a culture of giving lots of small gifts on numerous occasions, and the level of craft and creativity blows away anything I’ve seen in the United States outside of small artisan shops. What’s different about Taiwanese bakeries (which draws upon the Japanese bakery tradition, which itself draws from European influences) is that these are affordable everyday treats. Even the ubiquitous 7-11 convenience stores here are laden with imaginative amalgamations of savory sweetness. The Taiwanese appear to have an insatiable appetite for new and delicious things, and I suppose this could explain part of my personality. 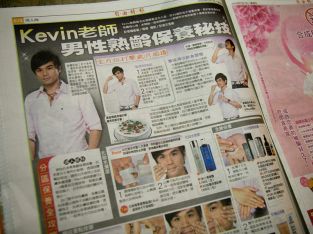 There was also what looks like a guy’s personal grooming section. Do Taiwanese guys read things like this, or do their girlfriends read it for them? 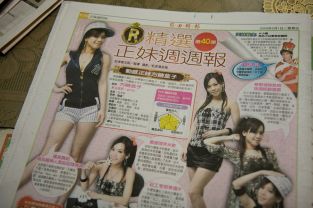 As for single Taiwanese guys with time on their hands, this mysterious spread of girls with URLs seems to offer albums of photos to browse. 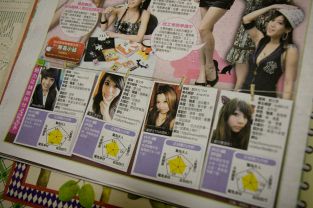 At first I thought it was a dating profile thing, but I guess these are celebrities of some kind? If you look closely there’s a URL for each profile, and there’s some kind of diagram accompanying each photo. 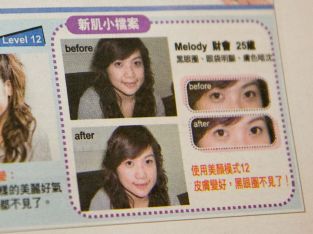 Lastly, we came across a digital camera advertisement which seems to take facial recognition to the next logical step: facial enhancement. We have no idea what this feature is, or if it even IS a feature, but we’re guessing it makes eyes look bigger. Large eyes are an essential component of cuteness, and I’ve heard that cosmetic surgery to reshape the eyes is popular among Asian females. I found this link to a similar camera, the Olympus u9000. The particular camera this ad was referring to is for a new Casio digital camera; the English press release doesn’t seem to mention eye enhancement, so maybe this is left off the European and North American versions of the camera. UPDATE: it’s called Make-Up Mode, and the new cameras also do up to 1000 frame-per-second movies! I might have to get one of these!