It’s 4AM and of course I’m wide awake. My sister and I, along with all of our cousins, arrived in at the Taiwan Taoyuan International Airport at around 4:30AM. The 15-hour flight on the EVA Air Boeing 777 wasn’t as bad as I thought it would be, because it’s relatively easy to sleep for most of it. They also had a video-on-demand system built-into each seat. The seats, which I had been dreading because I remember Taiwanese airlines packing us into tiny spaces, were actually quite comfortable for my American-sized ass. With the privatization of a lot of industries in the 23 years since I actually lived in Taiwan, there has been a general uptick in the quality of services. 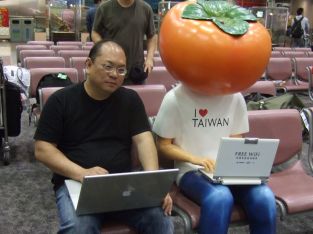 Upon arriving at the Airport I was struck by how different the Visa and Customs process was from how it used to be in the 80s and 90s. I remember it being a tedious affair, with a lot of double-checking of documents and searching of suitcases for taxable goods and forbidden media–Taiwan was under martial law at the time. This time, we walked right through the “No Goods to Declare Line”, and to my surprise we were already out in the reception area. As a sign of how times have changed, there was a statue of a persimmon-headed “Free WiFi” man checking his email instead of an M16-toting Chinese soldier covering the exits. Our group, consisting of nearly all the US-based cousins, immediately converged upon the statue and started to check our various Internet accounts and busting out the digital SLRs. As I learned at my Grandfather’s memorial service 9 years ago, apparently our obsession with gadgets is descended from Grandpa, who had been a leader in adopting new technologies in his Church, such as the use of amplification to extend his voice to large congregations. Grandma’s memorial service will provide more insights on Saturday; an English-language program will be broadcast over an FM-radio transmitter for the benefit of the English-speaking grandchildren by one of our older relatives. We are in good company. 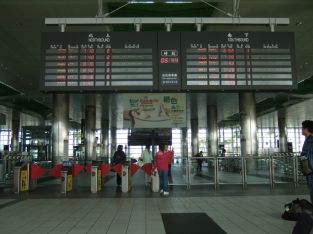 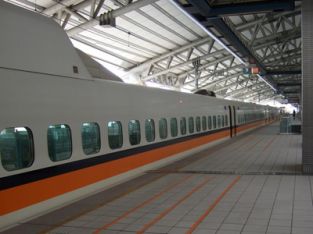 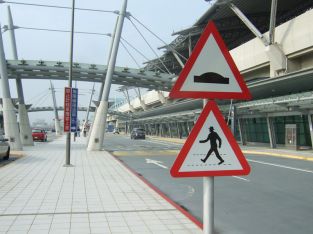 The high speed rail system in Taiwan cuts the trip between 208-mile Taipei-Kaohsiung trip from around 5 hours to about 90 minutes for about $15. The trip would be even longer by car. We took the train to Taichung, which is about halfway between, to be met by our Dad. This was the first time I’ve taken a high-speed train, and it’s impressively smooth. The one downside is that they don’t serve the boxed lunches based on Japanese Bentō boxes, but I mentioned this to Dad when we got home and he got some for dinner. Not quite the same, but still part of what I had missed about the place.

There are little things that stand out to me. For one thing, the Taiwanese sense of color feels just a little bit off, slightly tainted by unappetizing hues. For example, the EVA Air uniform is this kind of muddy green color that is supremely unattractive. The plastics in the appliances and daily consumables aren’t coordinated in pleasing ways, which was something that I’d noticed as a kid, and still am struck by as an adult. Maybe it has something to do with the awful fluorescent lighting that is in most homes and stores, or people here just don’t notice this kind of thing. Every once in a while I’m struck by an exceptional use of color and material, but in the urban neighborhood I’m in right now it is fairly rare. I’ll have to ask Dad if this is a typical neighborhood (we didn’t grow up here, so it’s still pretty new to me). When I overlook the color issue, though, I’m amazed by the vitality of the integration between small shops, services, and homes. There is an amazing variety of freshly-prepared food that’s available from a seeming infinite supply of vendors, block after block, and they all seem busy with the daily routine of living. The emphasis of design, uniqueness, and stylistic expression that we have in nominal amounts in the USA is almost completely absent in this part of the island, drowned out by the visual noise of the utilitarian concrete and tiled buildings. All the building here seem to be covered with bathroom tiles, BTW. Every house, however, seems to have a kind of luxury goods shrine where the collection of finer things resides: bottles of expensive liquor, for example. Luxury brand names are well-known here when it comes to buying gifts and showing wealth. When it comes to everyday things, though, brand seems to be less important, but I may be jumping to a premature conclusion.

There are other things. Bath towels here are not as absorbent, perhaps because they contain more synthetic content. Toilet paper is thinner and tends to come in square packages like napkins in the US. Scooters are everywhere, ridden by people of all ages and physical prowess without fear of death as a practical mode of transportation. Appliances are lightly-built and scaled-down compared to what we have in the States. And yet it is all familiar and alive. I think back of our malls and office buildings in suburban America, and it all seems so rigid now. However, there is one import into Taiwan that I’ve never seen before: massive displays of graffiti and other signs of tagging. I don’t ever recall public displays of anarchy before, probably because the former military government’s imposition of martial law would have come down harshly on the perpetrators. A more permeable Taiwanese society is apparently allowing world underground culture to seep in.

Tomorrow we’ll be taking the car to Tainan, where we’ll meet up with the rest of our relatives in preparation for tomorrow’s memorial service. For now, I’m going to try to catch some more sleep.