Groundhogs, The Future, and Tanabata Too

It’s 07/07, which is Groundhog Day Resolutions Review Day 5. This is one of the 10 days during the year when I review the progress of my resolutions. In 2007 , I did a fair job of keeping to task, but my zeal for process faltered this year. I’ve been all over the place, as you can see from my past posts on the subject. Last month’s update was really just an admission that I didn’t really like tracking my goals because I lacked real passion for it.

Today is the day when I reset my expectations.

From Goals to Business Outline

Here are the general goals I’d set this year. I’ve crossed out the ones that I’ve either achieved or no longer need:

On review, the first three items on this list are really the same thing: how to make a living doing something I love. My challenge for the past two years has been to figure out exactly what that means. The criteria for making that living is, functionally speaking:

Then I have some additional criteria for satisfying work:

The rudiments of a business model came to me as I was visiting the studio of Sid Ceasar, a local photographer that is starting a local scooter club. I was quite enchanted with his studio, filled as it was with toys, posters, and other cultural artifacts that suggested an eclectic mind. Sid’s studio told me the story of who he was and where he was going, and when it came time to describe what I did for a living this came out:

A the heart of everything I do, I like to share stories and experiences. All my media skills are employed in service to that.

Now, I’ve written about this thought before, but in the environmental context of a friend’s working studio the words helped evoke a different shape. The follow-up epiphany was that my design business really aspires to the following:

I help people create stories they can live by.

This captures a lot of different impulses I have: design, storytelling, sharing experiences, and productivity. And most importantly, I realized that there was a tiny voice inside of me that was trying to say something.

So what do I mean by “tiny voice”? Last year I posted about acting coach Susan Barton‘s approach to creating a “walking, talking human being” for her Oscar-award winning clients. There are three parts:

The little voice is that need, trying to express itself. As a little boy, I was pretty happy but tended toward feeling like an outsider. I spoke English and only English, and going to the Taiwanese Church where EVERYBODY EXCEPT ME spoke Taiwanese made me feel worse than stupid. It got worse when our family moved to Taiwan; again, although I went to an American/International school and could speak English every day, culturally and socially the rest of the island was a mysterious and frightening place. My need for understanding had a second dimension as well: I craved reliable and definitive references for my interests, and was often let down or put down by people who had “mastered” the subjects through some means I didn’t follow. I came to the conclusion that I was probably just dumb.

To cope with the feeling of dumbness, I focused on things I liked doing: writing essays, drawing spaceships, and debugging computer programs. It was upon these competencies that I built my persona. Writing I could always do, so I went into Computer Engineering and generally did well. I went on to Art School for computer graphics design, got into the video game industry, burned out, and ended up doing Internet stuff before discovering blogging. Over this period of time, I developed a pretty sophisticated and comprehensive set of methodologies that I have come to rely on, both professionally and personally. It is my suit of armor, girded when the going gets tough.

Recently, I came to wonder if that suit of armor had become a substitute for interaction, masking something else very deep inside of me. I realized that it was “the need” again, making sad noises and emanating mild terror. These feelings had been there for so long that I no longer heard them; they were just part of my automatic reaction to the world. The armor, effective as it was with dealing with the nastiness of the world, had muffled it.

I was scared to look, visions of The Tell-Tale Heart coming to mind. What if I didn’t like what I saw. But I had to look. Defining and facing your fears is just one of those things that you have to do. 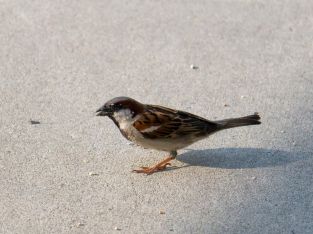 I lay down on my bed, looking up at the ceiling. Then I closed my eyes and quieted every rational and analytical thought that was going through my mind. After a few minutes of this, I felt the desire to bounce around in the world without fear. The manifestation of this desire wasn’t myself as a little boy. Instead, I envisioned a little bird, like the sparrows I see every morning at Starbucks. These birds had made an impression on me because they are aggressive, bold, and industrious in a cute sort of way. Now I was seeing them wrapped up and muffled by my persona, and they’re clambering to get out to start talking to people without apology.

“Whoa”, I breathed to myself, “I am going freakin’ nuts. I should keep this to myself.”

I came to the conclusion that these little birds actually were tough enough to face the world despite their small size. In other words, I didn’t need to protect these innermost desires from the nasty world. They can face it. If the world gets REALLY nasty, I can strap on my armor of rational objectivity then. The armor, however, is not me. I have to lead with the little birds, which means I have to lead with what is important to me in my heart. I suspect this is one of the keys to following my bliss.

In the days following this epiphany, I’ve found that I’ve relaxed a lot more when dealing with people, and for the first time don’t have trouble making eye contact. I don’t even think about it anymore, as the little birds bustling inside of me will do what they want. Before, I would rationalize my behavior: “What am I saying when I look at someone? What will they think? Will I offend them?” These are old behavioral patterns that are obsolete. Now, I know when I look that I’m just looking and taking in those people in the environment that I find interesting, no big deal.

For the coming month, I really want to work on the whole idea of a story-based design business that employs my particular powers of observation and analysis. I could write this up as a brief, but I think the form it will take is similar to my Make Your Own Museum approach on my public wiki. I think it will feel more “live”. It will be fun to define what this “agency” would be like in my wildest dreams. Hint: there would be a professional kitchen :-)

Secondly, I want to start blogging more regularly. I’ve been letting my other project sap the energy out of me in this regard, and it’s important to me to maintain momentum here because this is my main business. Shorter posts, with one idea per post, might do the trick. I’m thinking a 3-day a week schedule; we’ll check on this on August 8.

Thirdly, I want to complete my online dating profile by incorporating some of the suggestions I’d received. Yes, it will be shorter, and I will keep in mind that you really just need 3 or so intriguing things listed. I’m not out to sell my entire being on the first read (which is what I was doing). I’m just trying to be interesting enough for a date…thanks for that tip, everyone :-)

July 7 happens to be a Japanese holiday called Tanabata, a day when you write down your wishes on paper streamers and hang them from bamboo trees. I’m planning on deploying these wishes as goals for the rest of the year.