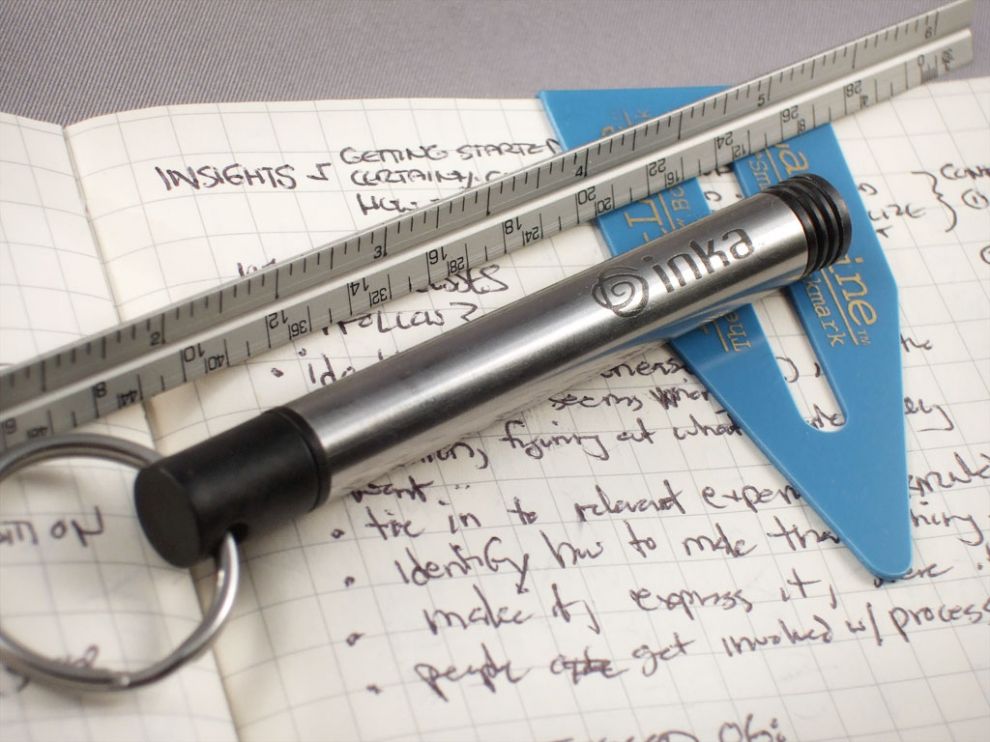 I’ve been writing way too much heavy stuff about focus lately, so it’s time for a quick gear break!

I ordered an Inka Pen from ThinkGeek a few weeks ago, hoping to use it as a replacement for the flat pens I’ve been using. While I like the flat pens, they are not quite as durable in the pocket, and despite their relative thinness they tend to bulge out of my reporter-style Moleskine notebooks. Wear and tear is also increased because I carry the notebook in my back pocket, which makes the flat pen tend to chew its way out of the pocket. Not good. 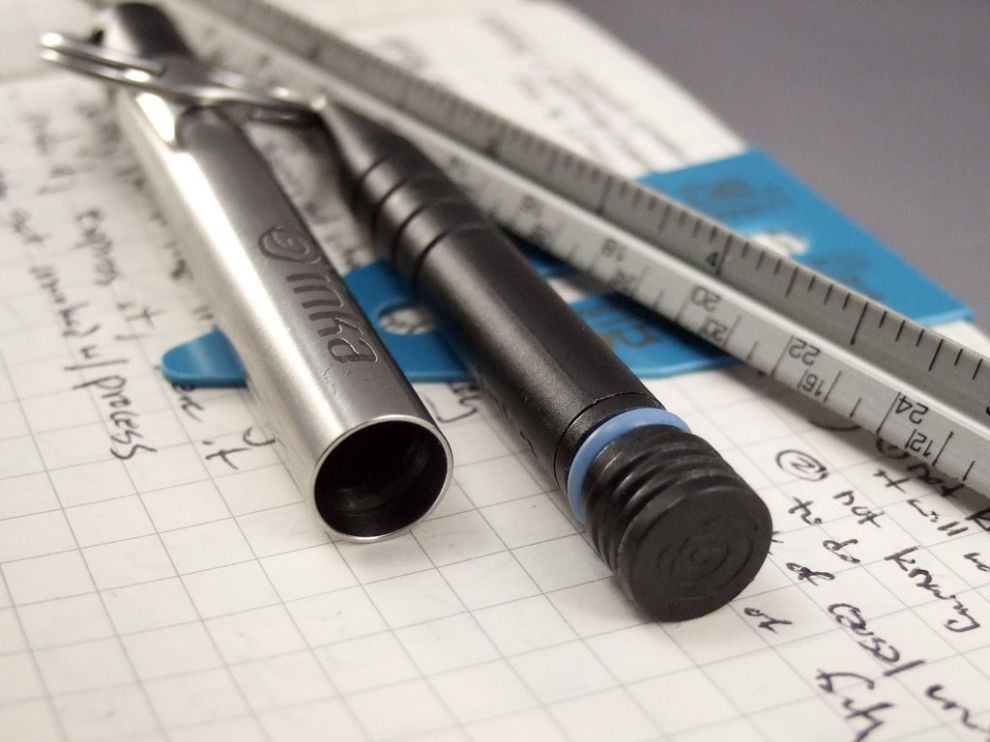 The Inka pens are pretty cool, having been designed for extreme conditions by its inventor, Greg Adelman. From the website:

Lightweight, watertight and built to withstand harsh environments. The pressurized ink cartridge ensures the pen will write wet or dry at any angle, any temperature, and any altitude.

I was a little skeptical about the robustness of the pen, because I could imagine the steel barrel warping or other some similar disaster occurring. This post on Kickstart News, however, offers some heartening detail about the pen’s machined outer barrel and carbon-fiber inner body construction.

I’ve been carrying the Inka around on my keychain for about a week, and I haven’t yet noticed any warping or even scratching. We shall see how it holds up over the long term, but two small details give me hope: the end of the steel outer body, which you can see above, is utterly round and smoothly polished, unlike just about every mass-market pen I’ve ever seen. The pen also screws together without any scratchiness or scraping sensation, again unlike just about any other pen I’ve owned. This is a precision-made object. 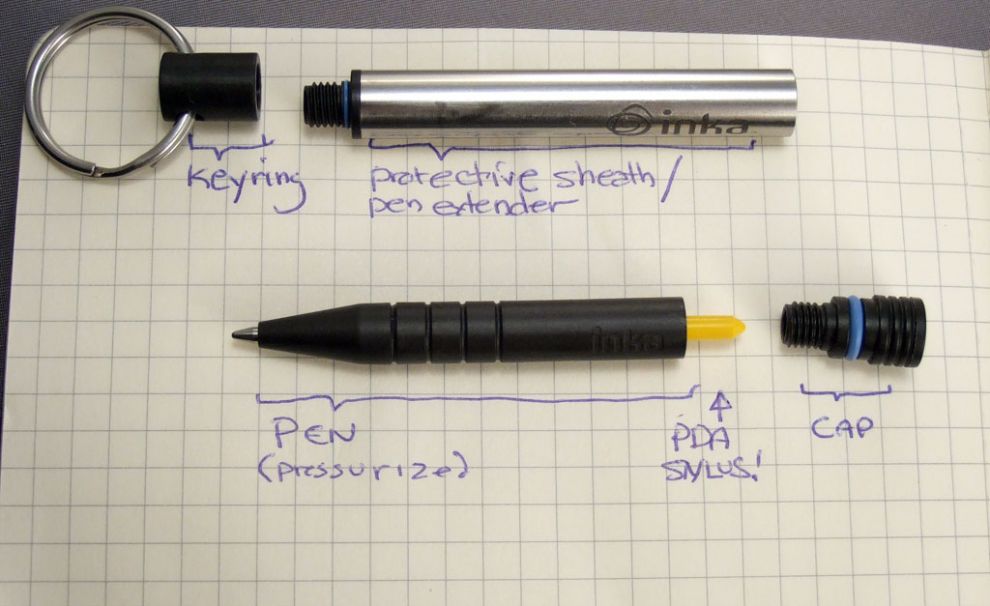 The pen itself is comprised of several unscrewable components. You can use the pen in two ways: 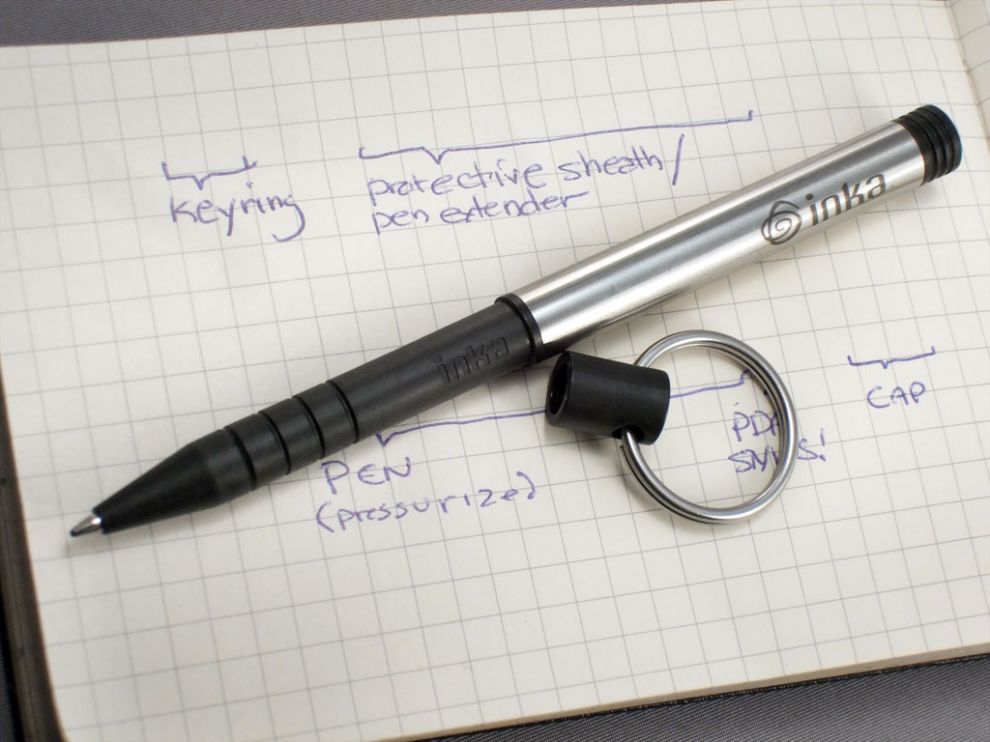 The one down side I’ve found about the Inka pen is that it got me held up at the TSA security line. It didn’t help that I was also carrying a stubby plastic pen shaped like a small cigarette and mechanical lead engineering pencil with a very cool double-clutch lead gripping mechanism on top of the usual laptop gear. My laptop bag must have looked like a bomb maker’s tool kit. :-)