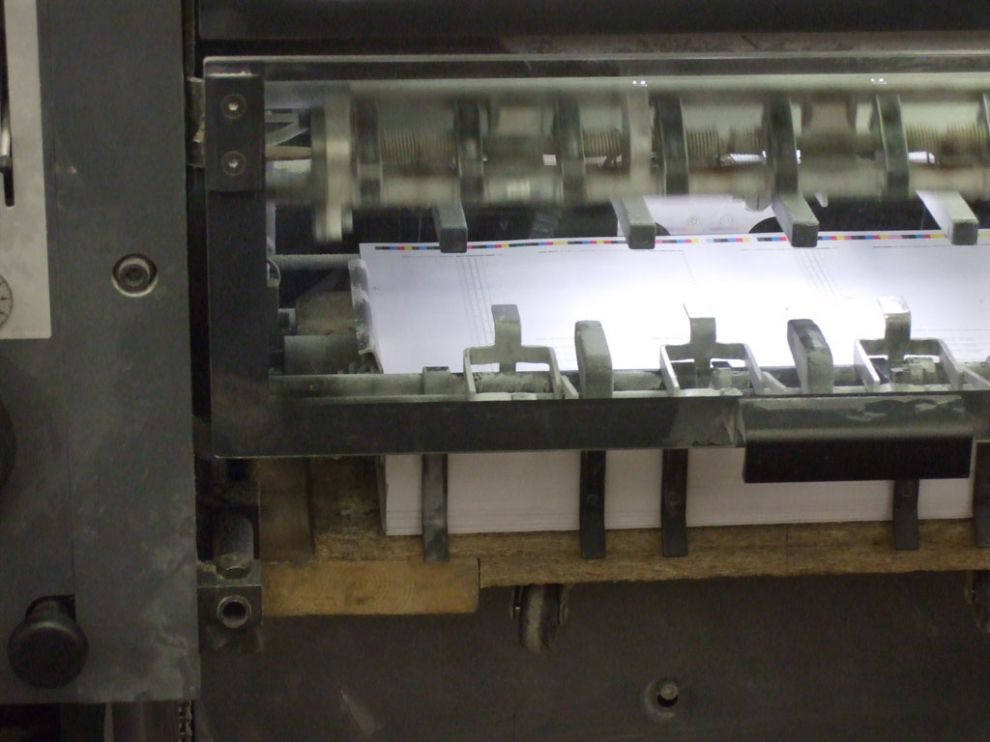 This morning I went to my first-ever press check at Papergraphics, a printing company based in Merrimack, New Hampshire. The press check a final form of approval, pulling the first few sheets from a press run to make sure the color looks right and that there are no final issues. I was mostly curious about what the inside of an actual printing shop looked like. Our representative, Susan, was very patient in answering my questions and in allowing me to take pictures. Printing is awesome. There’s something magical about watching a blank sheet of paper make its way down the press to emerge, transformed, into something much more. 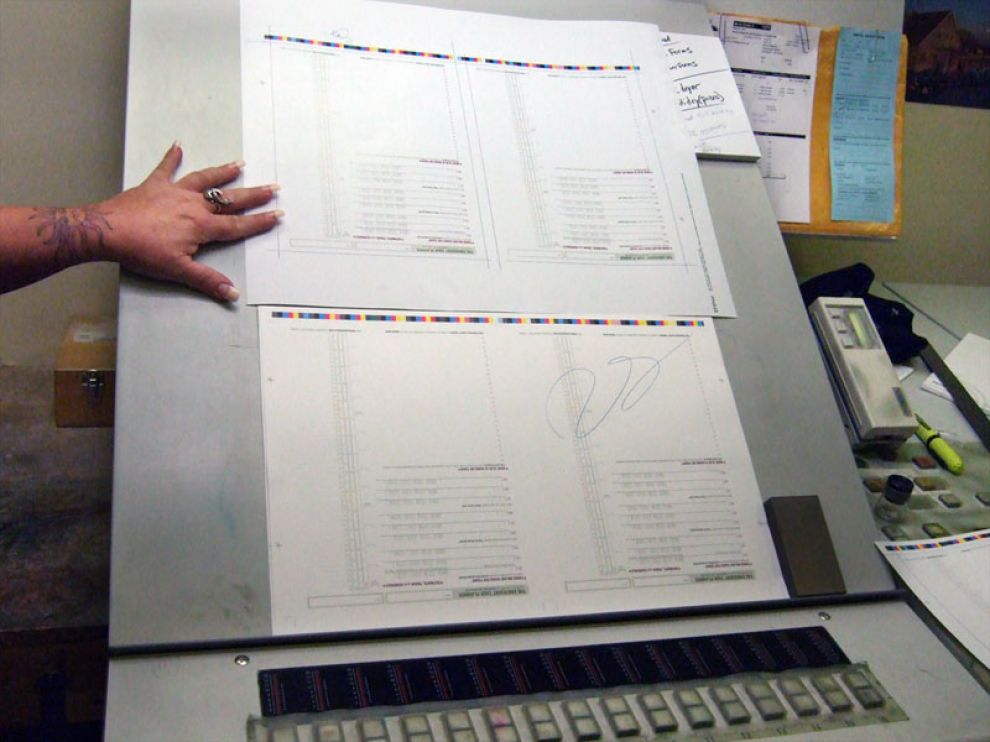 By the time I arrived, the press had already been set up and had printed a few hundred sheets of our 18,750 sheet run. The press guy pulled a sheet off and handed it to Susan, who then put it up under a light to compare. Everything looked fine to me, until I noticed it looked too good: the printed area of the page was perfectly centered. However, our design is off-centered on purpose, as to provide space for hole punching for those who need it. I had not caught this in yesterday’s proofing check, but the press guy said that it could be adjusted by just moving the cropping marks. He made a sheet that described the changes (see picture below), and then painted out the crop marks on the actual plates. 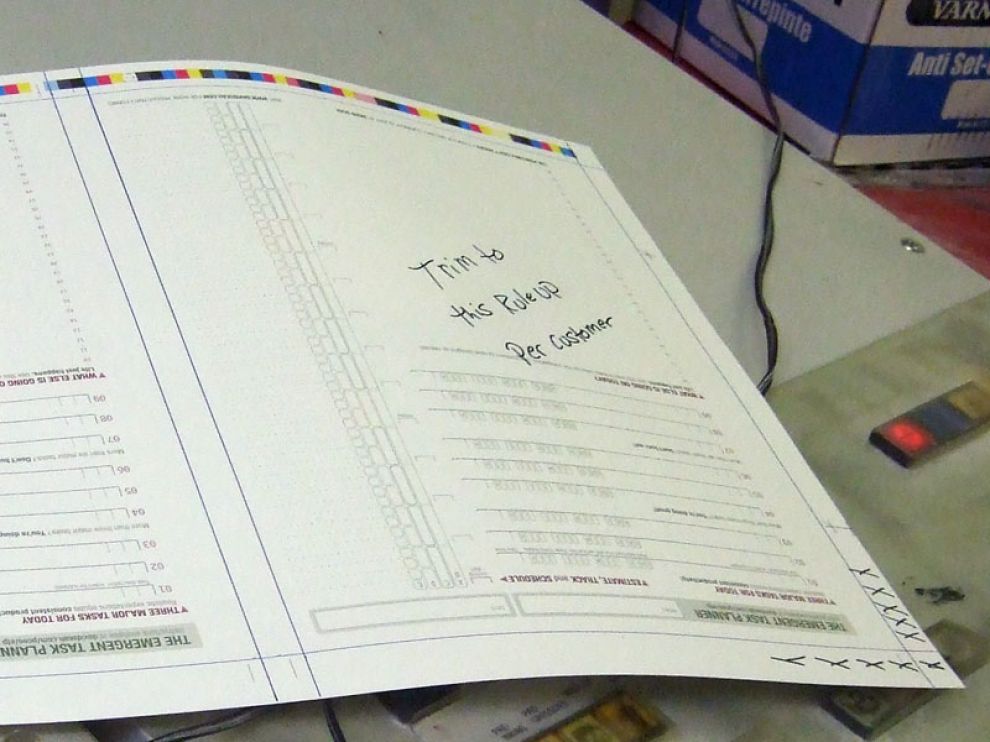 As this was going on, Susan showed me around the press, pointing out its various features. It was a 5-color press, meaning it could print up to five different inks at a time. We’re printing the Emergent Task Planner as 4-color process. This refers to the use of 4 standard primary inks: cyan, magenta, yellow, and black. The inks come in cans (below, left) which they sometimes mix themselves for custom colors. A gallon of ink is good for “thousands of impressions”. A plate is a piece of flexible metal (bottom, right) that fits over a roller in the press that has been treated to hold ink (bottom, middle). When the plate rolls over the paper, the ink of that color remains. 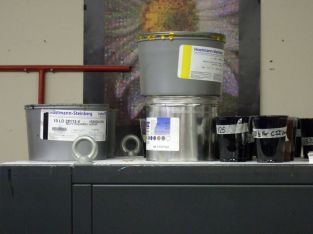 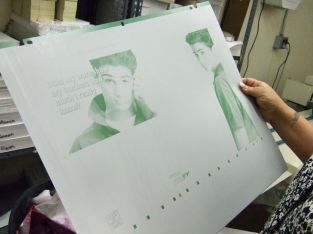 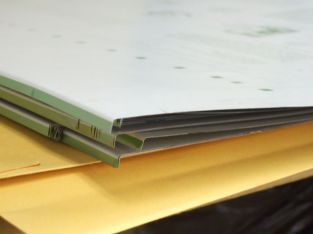 I liked the smell of the ink, which had a slightly sweet smell. There is something intoxicating about it. I was also enthralled by the printing process itself, because it requires an attentive eye to maintain quality throughout the run. I could imagine myself working as a printer if there weren’t any computers around. Going back even further, I probably would have been a clockmaker or a blacksmith. 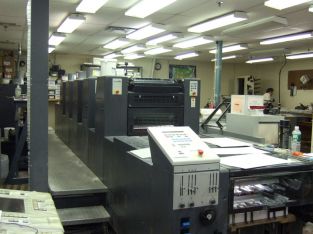 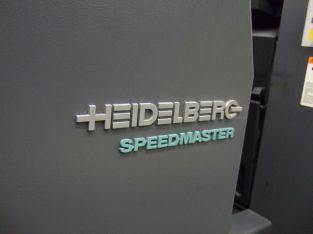 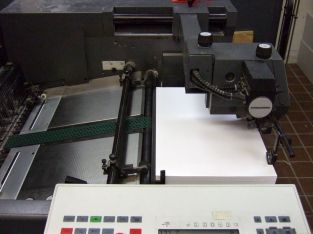 Watching a pile of blank paper get transformed into an actual product was one of the most quietly exciting things I’ve experienced. There was something kind of calming about the experience. It may have been the press guys around the room that exuded that sense of quiet competence. Pretty awesome.

It’s just hitting me that this is a moment I have been waiting for my entire life. For the first time, I’ve created a physical manifestation of my own product. I’m glad I had a chance to see the printing process first hand; it just wouldn’t have been the same ordering over the Internet. 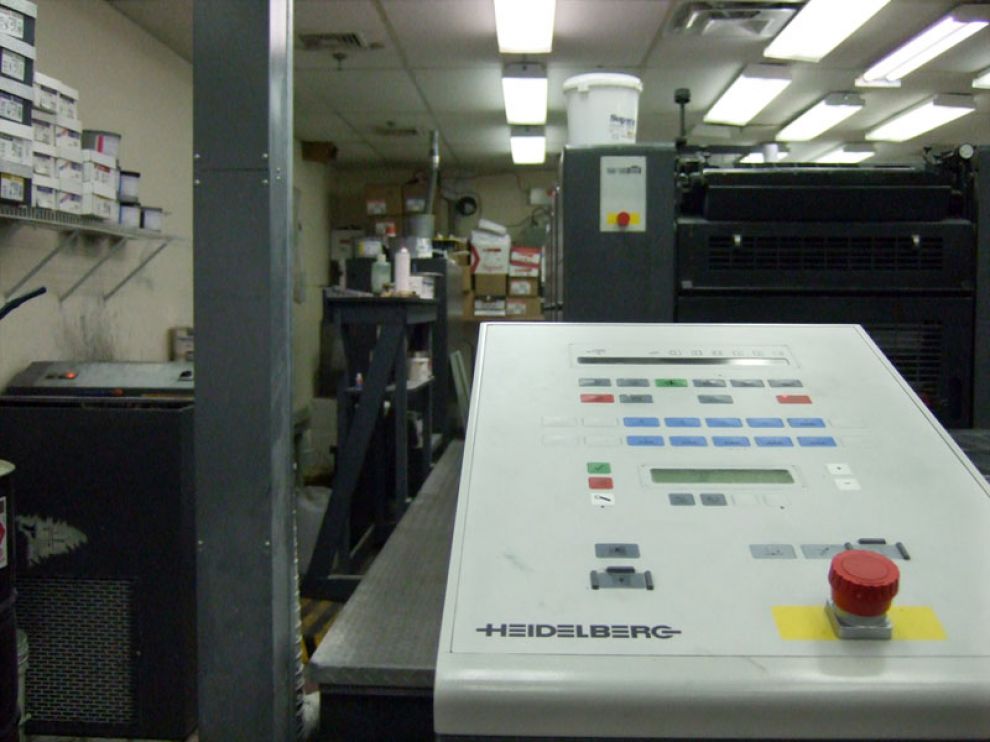 On a side note, 55 of the 86 pre-order confirmation emails I sent out have been been acknowledged, which means that I probably won’t lose money now. If you ordered an ETP pad but didn’t get a pre-order email last night, leave a comment here and I’ll get back to you as soon as possible.

The next step, once the pads are delivered to Manchester, is to actually create some packages and price out the postage.