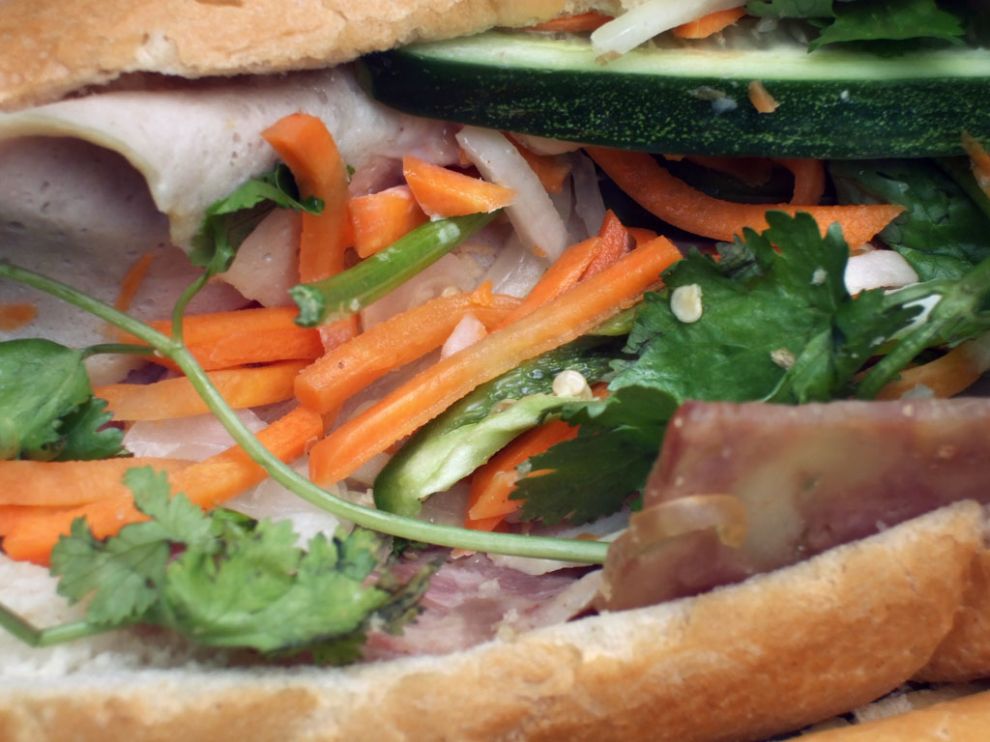 The cuisine of Vietnam has fascinated me for some time, as I’ve been told it’s a hybrid of colonial French and native Indochinese cooking traditions. The sandwich, which I just found out is called Bánh mì, is one of those interesting mashups of foodstuffs, a tantalizing collection of mystery meats nestled into a French baguette. The aroma is sweet and aromatic from the carrots and cilantro, and when I bite into the delightfully-crusty baguette, I’m delighted by the crunchiness of the vegetables and slight spiciness that pervades the ingredients. It’s quite a different sandwich experience than almost anything I’ve had before, a melange of savory, sweet, spicy, and tart flavors playing musical chairs in my mouth. Compounding the mystery: I couldn’t identify any of the meats or underlying flavors with confidence.

So today I finally decided to get to the bottom of this mystery. I bought three sandwiches: one to eat right away, one to dissect, and one “just in case” something went wrong. 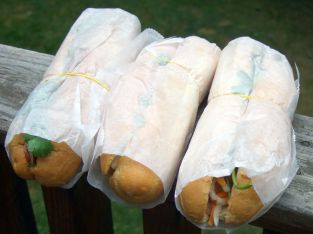 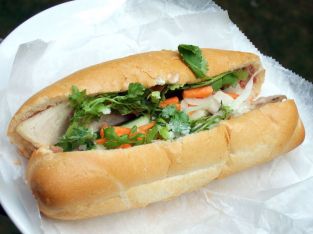 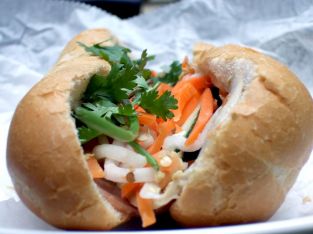 For explicit pictures of sandwich dissection, read onwards! But be warned: this is not for the gastronomically faint of heart :-)

To kick off my investigation, I decided to disassemble the sandwich into its constituent components. I have been inspired by the forensic crime drama Bones, which features a crack team of quirky forensic experts that do a lot of really gross lab work to uncover evidence regarding each decomposing victim’s last moments. What would I uncover? Would I be able to stomach my findings? 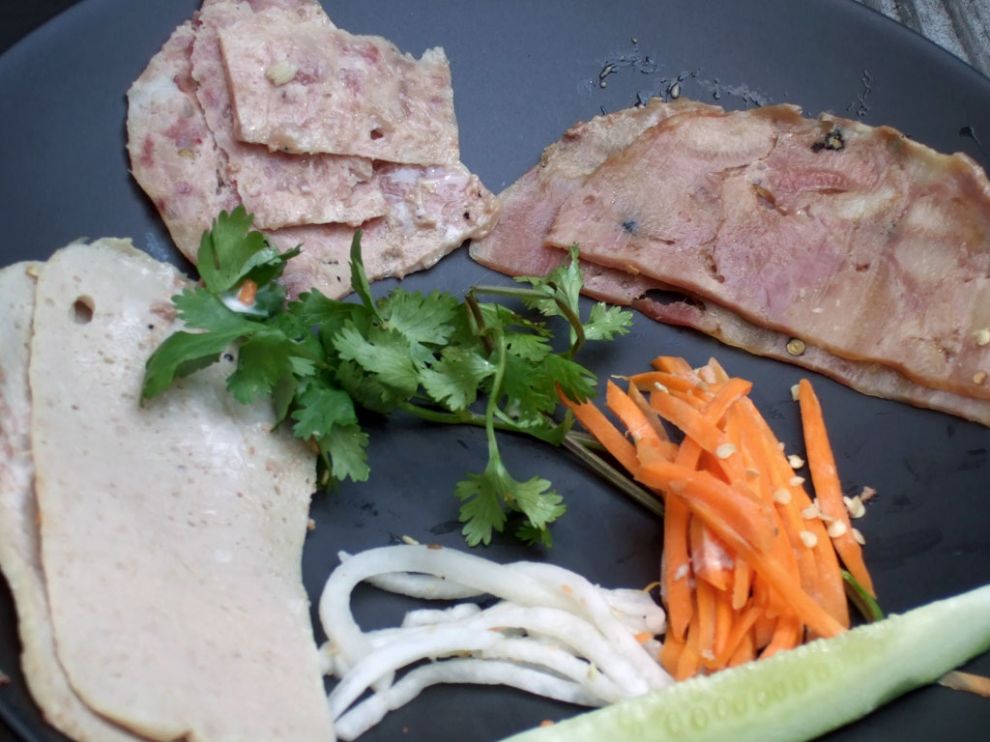 The vegetable components: cilantro (green and aromatic), lightly-pickled carrots (crunchy, fresh, slightly sweet and slightly vinegary), lightly-pickled daikon/white radish (treated in a similar manner as the carrot), some slivers of onion (white, raw), a cucumber spear (raw, not pickled at all), and some small seeds which I believe were from a hot pepper.

The meat was unidentifiable to me, but appeared to be of the “loaf” variety. There were three kinds: 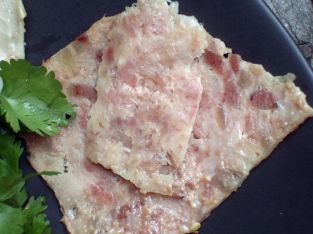 This was a savory, slightly sweet meat that I think was pork-based. The consistency of the meat was like a coarse-packed sausage but not as salty. It was rather mild, and kind of chewy. 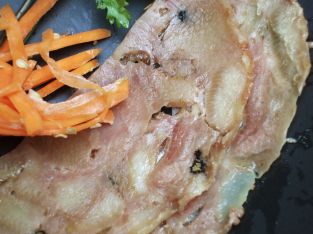 This one was darker in color and with a saltier flavor than Meat #1. It appeared that there were large chunks of stewed tendon (which Asians love for the crunchy chewiness) intermixed with the actual meat, which was sort of ham-like in flavor. There were peppercorns also embedded in this meat. 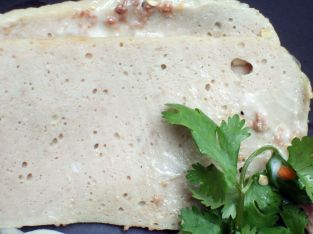 A spongy, processed minced-pork meat, sort of like a chicken loaf. If you have had the Vietnamese-style fish cakes, fish balls, or pork balls, you would recognize this flavor. If you can imagine an unbattered and steamed “Pork McNugget” that was big enough to slice, you’d be pretty close what this is. I think. It was more mild, like Meat #1, but more subtle. Perhaps it was due to the slightly spongy texture of the meat.

I sampled each of the ingredients by themselves to get an idea of how they each tasted. The dominant flavors were the slightly-sweet pickle taste of the vegetables, the aromatic greenness of the cilantro, and the salty-savory-sweet taste of the meat. The peppercorns and pepper seeds added a little jolt to the the nasal passages, but didn’t add much heat. Texturewise, the ingredients were all different kinds of “crunchy” with the exception of the cilantro and Meat #3. This is a sandwich that you can munch and crunch on. 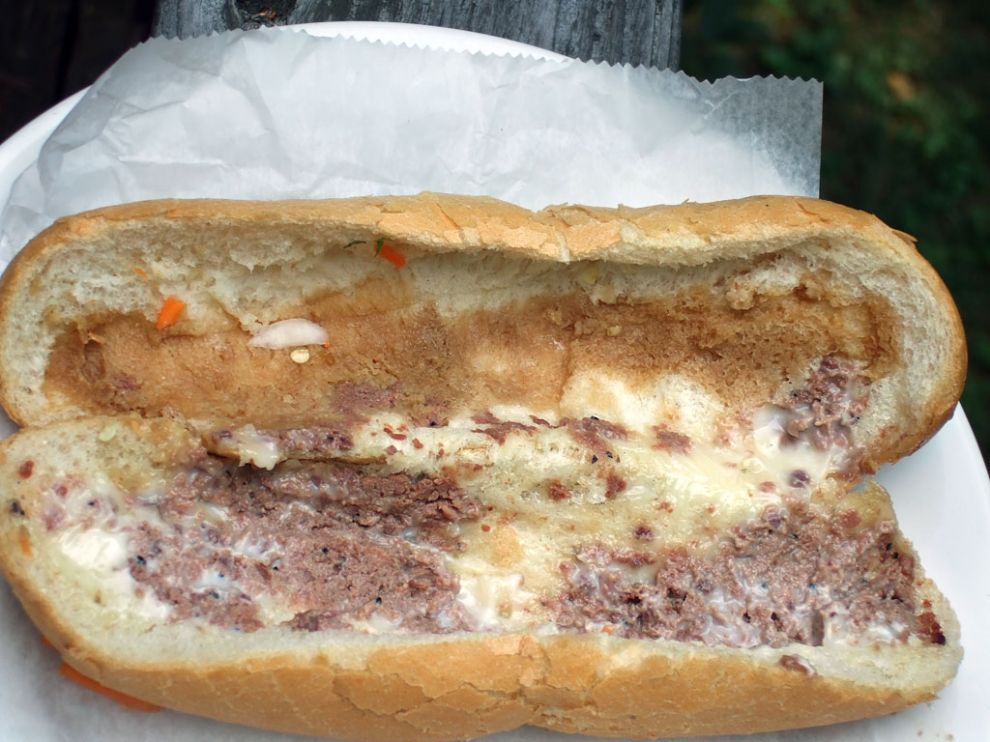 The baguette was cut down the middle, and spread with mayonnaise (the sweeter Asian variety), some kind of minced organ meat (some form of pate; there was a light liver-like taste to it), and some kind of brown sauce (it tasted like soy sauce, possibly a soy sauce-based meat broth mixture).

I sampled the bread by itself to get a sense of its flavor. It was a nice loaf that was just salty enough, but not so salty that it would overwhelm the ingredients. It was a little stale from sitting out, but overall it was a cut above the usual run-of-the-mill sandwich roll.

The combination of flavors: sweet mayonnaise and the slightly-eggy surface of the baguette dominate first. The soy sauce seemed to be like a very subtle anchoring flavor (soy sauce + pork is a comforting taste to me). The pate adds a slightly unsettling flavor; if you don’t like chopped liver or liverwurst, you probably will find it disgusting. I happen to like liver these days, so it’s merely an unexpected flavor for me. It probably is what helps make the sandwich taste so unique; without it, you basically have a crunchy cold cut sandwich with sweet mayonnaise.

This is a crunchy sandwich due to the carrots, radishes, and cucumber, and it’s this texture I notice first. The meats in the sandwich, while flavorful, are not the dominant flavor at all. What dominates is the sweetness of the mayonnaise, and the lightly sweet-and-tart pickled vegetables. The savoriness of all the meat, soy sauce, and pate assert themselves more softly toward the end of each bite, acting more to provide a needed counterbalance to the sweetness of the overall experience. The meat itself is a bit chewy-crunchy too, due to the tendons that seem to be part of the sausage grind. Aromatically, the sweetness, the cilantro, and the bread assert themselves from the moment you pick up the sandwich and give its crust an anticipatory squeeze.

I can’t quite think of another sandwich experience like this, and while I wouldn’t go out of my way to have one every day, it certainly is a nice change from the typical fare one gets around here. So next time you come across a Vietnamese market and see a pile of sandwiches, grab one and see how you like it. If you can eat a hot dog, fabricated as they are from beef lips and pig snouts ground and stuffed into a natural intestine casing, then you should be able to eat this sandwich. My main concern was that there would be shrimp in it (I hate shrimp), but the flavor that was throwing me off turned out to be the pate.

While it’s no Dibella’s sub, it will do in a pinch. I will have to try different ones now to find the King of All Bánh Mì in my local area!

UPDATE: My sis points out that the awesome Porkchop Express blog has an excellent Bian Mi Basics article, detailing the ingredients further. Though I didn’t need to know about the “head cheese roll”.