I hadn’t originally planned on making these additional tweaks, but all the excellent feedback had me revisiting the time boxing to take different schedules into account.

The original restriction behind timeboxes is from an older form, Menu of the Day. It was specifically designed to force myself to plan in boxes of time so I could maintain a “regular” schedule. This concept of boxes is also key in The Resource Tracker/Scheduler: once you can chunk tasks into standard sizes, it’s easier to “pack” days looking forward without screwing yourself.

Although this past timebox work was the foundation of the ETP, I’ve slowly come to realize that it is a separate product. This comment from Jason Langenauer is the one that broke the mental logjam (emphasis mine):

[…] Also, as I start at 7am, the lunch “breaks” in the day planner don’t align to any real break in my day – I just mark in a half-hour block when I take my lunch. I’d say almost certainly remove them, as people’s lunch times and lengths will vary, but I think they also provide a useful visual cue to find yourself in the day. Without them, it’d be difficult to immediately go to a certain time. 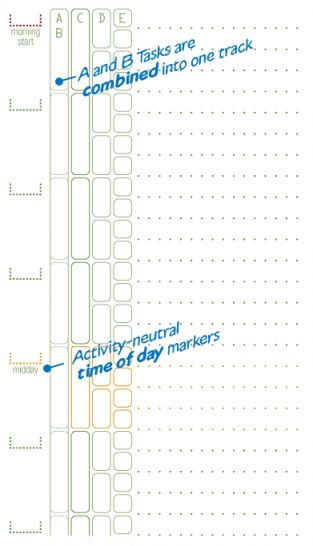 What I liked about Jason’s comment was the insight that yes, people’s breaks tend to vary (a point made by many others), but the additional insight was that the timebox design makes it easy to see where in the day you were. This was not something I had considered specifically in the original design, but it came along for free because lunch and dinner create temporal landmarks in the day, creating natural boundaries between “morning work” and “afternoon work”.

Taking these two observations into account, I’ve made the following adjustments:

I have yet to call printers and fulfillment houses, and I’m behind on several other personal goals from my Groundhog Day Resolutions. However, as this project is one of those goals, I don’t feel I’m doing too bad because progress is being made. I’ve also gotten some interesting contacts from a couple manufacturers of notebooks and pre-printed “Post-It” pads.

A promotions company called Adlib Advertising showed me their printing on “Post-It” pads. There’s some interesting things like this executive set, which might be interesting for some kind of single-task based system, but I’m going to have to think about it. I could see this being useful for another kind of scheduler-based system. In the meantime, I’m just mulling over the possibilities.

p>The next ten days will be very busy for me as I close out several billable projects, so I’ll not be posting very much until after Memorial Day (May 29th).

Have a great week!