While I knew that creating my own product was well within my grasp, I’m finding that walking the path is a lot different than just dreaming about it. I think the reason is this: when you’re on the path, you can actually see what’s coming at you. When you’re not on the path, the opportunities and pitfalls that you imagine are really just abstractions or undefined fears. Getting on the path—and that really means doing something and being accountable for the results—is much more interesting.

I got my first real taste of this while going through all the great comments from yesterday’s post. I’ve worked on projects before that have been seen by lots of people, but generally the work has been in areas where I was already technically competent. Creating my own product is a bit different, and it’s rather exhilarating to be a noob again. The reason it’s exciting rather than merely terrifying is because I’ve learned to embrace newness as something that’s unlikely to actually kill me, so why not? Also, yesterday I got a fortune cookie that said this: When you understand, you are not learning. Wow!

But I digress…I’m pretty jazzed about the adjustments I’ve made to my developing product strategy. Read onward!

I was surprised that there are people using the form for billing and general time tracking. I’d originally designed the ETP to help me develop a better sense of available time and to provide daily focus. It’s funny that of all the forms I’ve designed, I originally thought this one was the least useful to a general audience. Live and learn! I’ve made the following changes to address some of the comments raised yesterday:

The new sheet is on the left, and the old sheet is to the right. 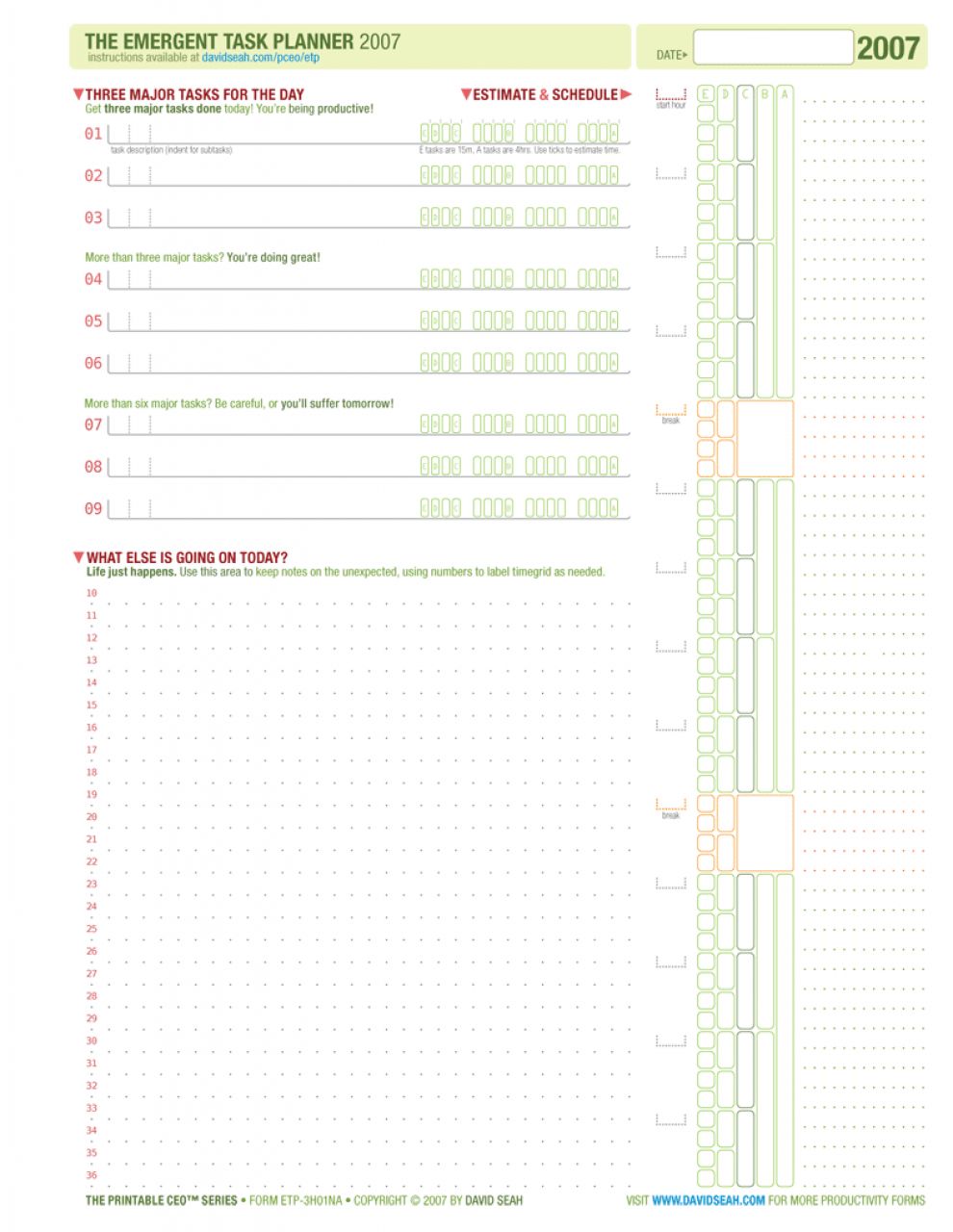 Based on comments, I’m leaning toward:

There were lots of interesting ideas mentioned:

These have been filed for later contemplation! I’ve already got my hands full with this! :-) It would be fun to make all of those things.

This is very preliminary thinking, but I thought I’d share anyway. I think there are at least three types of people who find this product interesting:

p>I’d like to meet all three audiences, but I don’t want to overextend myself. I’m targeting the first two with a simple product, and will just see where that goes. The last product will need an actual system and perhaps a book to explain it; I just have components of the system now, and really we’re all still testing it.

To work out a starting point for printing, I started with the following average costs-per-page, culled from some online searches:

If I were competing on cost alone, that suggests that a pack of 100 color sheets should be priced between $8 and $12 dollars. Now I need to look at other products on the market:

I will need to visit an office supply store and look more closely at the range of products, but this is telling me that people might expect to pay around 10 cents a page and not feel like they’re getting totally ripped off. For extra-fancy content, I could probably charge a few cents more per page. If I put together some kind of system, then there’s opportunity to create a neat package down the line. I could probably charge 20 cents a page with a sufficiently cool package, or if there was some kind of nifty pack-in tool (again, this gets toward systems).

For now, I’m going to use 10 cents / page as a working estimate, and compare printing costs to that.

Rather than include shipping in the cost, I’m going to break it out separately. In the future, I’ll use a fulfillment center of some kind, so I don’t have to worry about shipping things out of my house. Initially, I may do fulfillment myself just to see what kind of things happen, and learn more about the way the Post Office works (I love visiting the post office :-)

A big question is handling european orders. The complexity of handling overseas orders could quickly eat up any profit to be gained from the order. If any european readers have had exceptionally good results ordering paper goods from small US companies, I’d like to know what companies they are.

I also liked the idea of getting a single person to receive a larger shipment, and let them handle distribution. Perhaps I can order online printing from an international printer and let them handle shipping. I really don’t know, but I know there are places to find out. For now, I’m going to focus on the US.

This also brings to mind the possibility of internationalization for different languages. More food for thought!

I’ve been talking with my buddy Scott, who’s local and very knowledgeable about pricing and printing. He was telling me about some of the custom Print On Demand services that might make it cost-effective to do mass customized forms and fulfillment, which is a very interesting idea. Very exciting!

Also, before I actually sell anything, I need to create a separate business entity. Gotta protect myself here, and it’s a good opportunity to learn how to create a focused business with its own books.

That’s all for now!