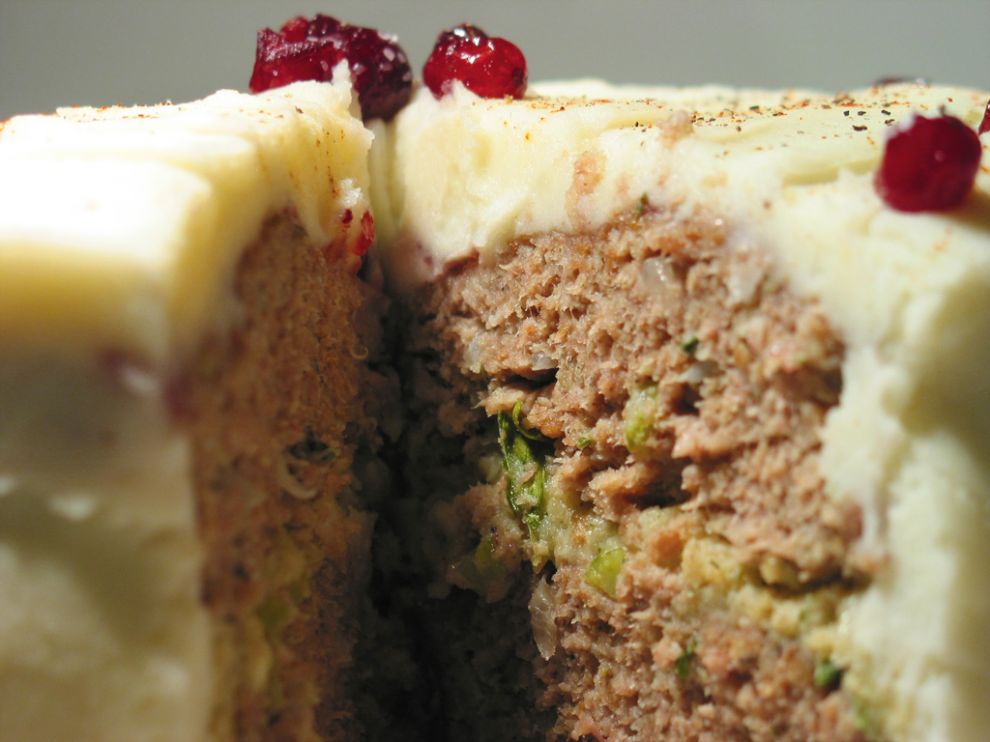 My sister Emily recently sent me a link to the culinary revelation that is Meat Cake, a “less-girly cake” made from fine American meat products! Since we had our traditional Thanksgiving dinner a few weeks ago with Dad, this holiday weekend was a good time to do something different. The idea to make a Thanksgiving Meat Cake was based on the thanksgiving sandwiches I used to get from a Boston deli when I worked in Fort Point Channel. There’s a similar Martha Stewart Meatloaf Cake too, but we drew our inspiration from the Black Widow Bakery version because it’s steeped in awesomeness!

So here’s how it went! 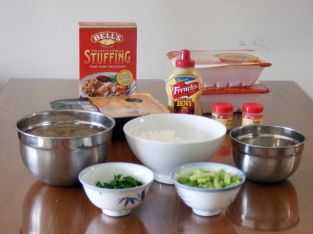 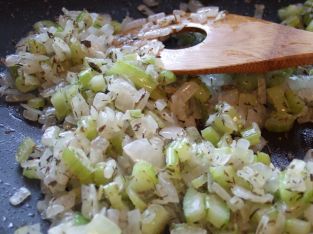 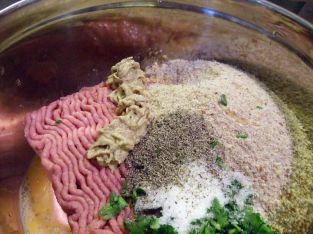 We started with a basic turkey meatloaf recipe (without the apples). We doubled the ingredients to get two 9″ cake pans filled.

The original recipe called for an hour in the oven, but the 9″ cake pans we used make thinner patties and will cook faster. Since turkey tends to dry out fast, we used the “toothpick test” to check when the loaf was cooked. Our cook time was 25min for the first stage, followed by a quick glazing with cranberry sauce, finished with another 5min under the broiler to dry it out.

You’ll notice the that our raw meatloaf cakepans have a dimple in the middle. We thought it would help compensate for the meatloaf’s tendency to expand and rise in the middle. It would also provide a place for the stuffing layer to hold on to. 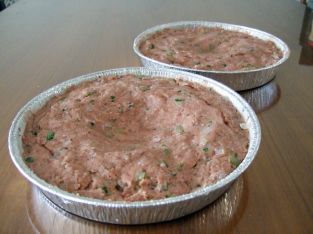 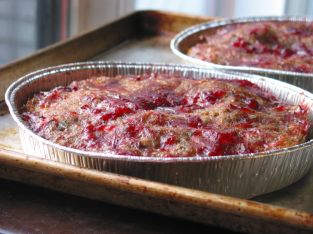 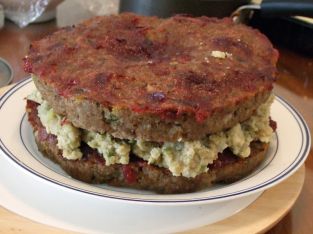 After the meatloaf layers cooled (about 30 minutes), we piled instant turkey stuffing between them and stacked them up. I have a spinning cheese platter that Em’s boyfriend Robert gave me a few years ago for Christmas; with a circular piece of freezer paper on top of it, this worked well as an impromptu cake frosting platform. 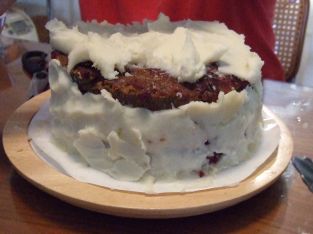 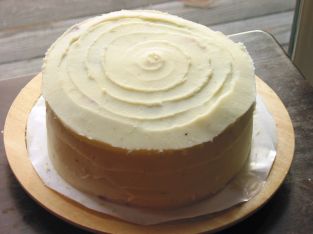 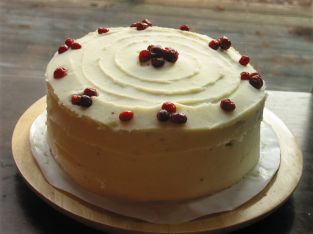 Being lazy, we used prepared mashed potatoes from the local supermarket for the frosting. I’ve never frosted a cake before, so I just glopped the stuff on all around and then spun the platter, using a large sillicon spatula dipped in warm water to slowly smooth it out. It’s a bit wobbly and uneven, but that just adds to its charm :-) A neat swirly pattern on the top formed, so we left it and garnished it with clusters of whole cranberries Em picked out of the canned cranberry sauce. We didn’t have very many, so we just made a simple pattern, then garnished with a bit of paprika, ground pepper, and flakes of Morton’s Kosher Salt.

Having our Cake (and Eating it Too) 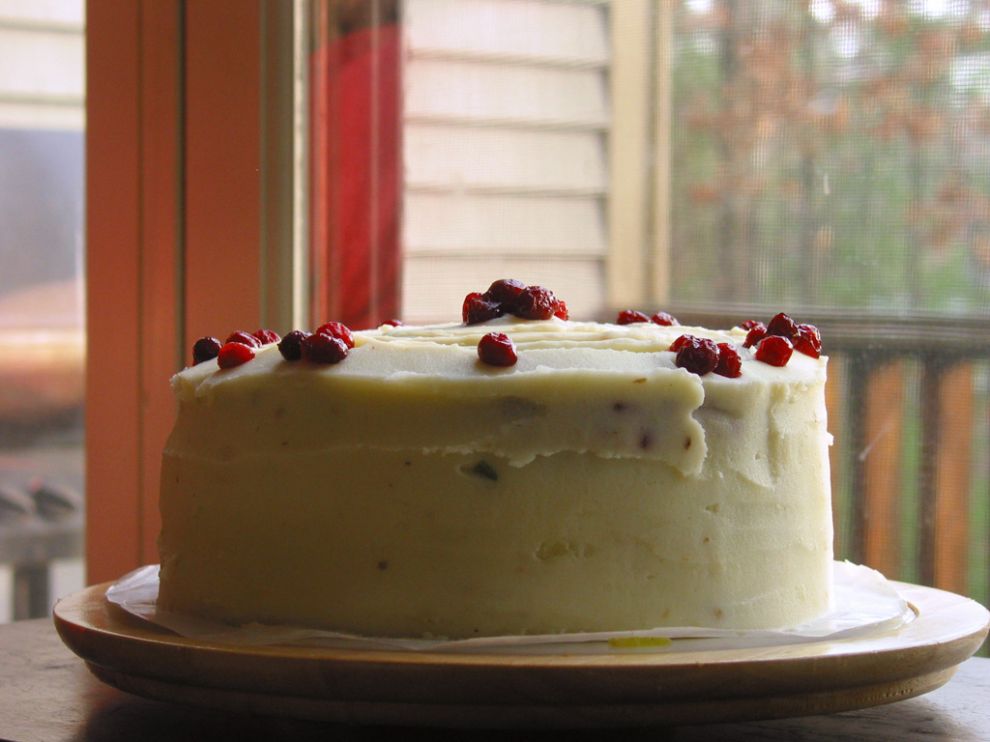 After taking a zillion pictures of the cake—much to the disgruntlement of Em’s boyfriend, waiting with fork and knife at the ready—we drizzled some plates with mushroom gravy and laid big slices o’ turkey cake on them. 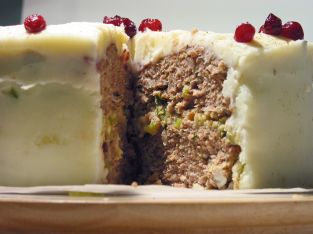 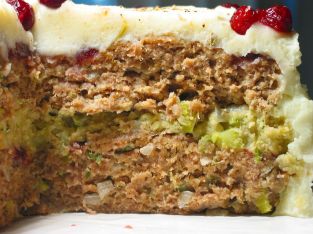 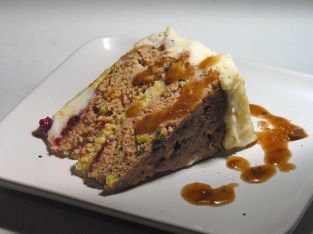 p>For next time, we’re thinking of trying more of a baklava style layered cake, using real roasted turkey layered with stuffing, potatoes, and gravy, to get better flavor. But then we’d end up cooking Thanksgiving dinner again, and it’s not really that different from turkey casserole.

Anyway, the big win is this: WE MADE MEAT CAKE! MUA HA HA HA!