We born-again productivistas are packin’ paper heat in our leather-backed Moleskines and slingin’ Hipsters in our back pockets like they grow on trees instead of bein’ made from ’em. Back at the ranch we’ve got Noguchi and tickler files backing us up, keeping our thoughts sizzling and ready-to-go. I once seen a guy, a specialist by the looks of him, use simple index cards kill a task dead at 15 paces without having to click a single mouse button. Welcome to the Wild Wild West of Paper Productivity. It’s a gritty, physical world we live in, and we likes our tools to be tangible, portable, and crushproof. Booyah!

As tough as I reckoned I was with all my paper-based weaponry—you should see the paper task shuriken I’ve been working on—my delusions of badassedness came to an abrupt end when I came across Magnatag products half a year ago. I had stumbled onto a trove of custom magnetic whiteboards and task tracking support tools, built large from steel and plastic. They’re working tools for daily use in the field, for information-critical activities like truck dispatching, construction projects and even church management. From shipping containers to saving souls, Magnatag seems to have an informational whiteboard product for every industry that needs to get things done. Suddenly, my pretty inkjet-printed forms didn’t seem so substantial, especially when the most pressing item listed is don’t forget to buy more cat food and toilet paper.

That said, I try to learn from my mistakes, especially when it means there’s an opportunity to upgrade my arsenal. If you are shopping for a productivity freak itching to lay the hurt on a pile of projects, you might give Magnatag a look-see. Here are some new products I’ve taken a fancy to since my last post:

[NOTE: I’ve just read in the comments that the Magnatag website is only viewable in North America. Apologies for the inconvenience.] 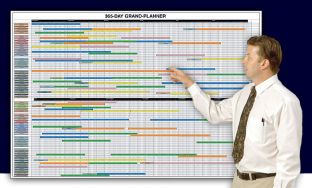 The Magnatag Grand Planner shows up to two years of a project, in familiar Gantt chart style. That’s a big board, for big jobs. 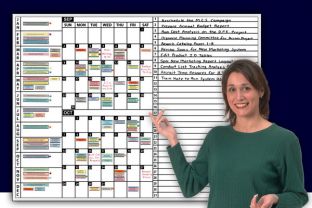 For those seeking something a little more intimate, this Personal Time-Task Organizer might do the trick. I like the idea of it, though I don’t have space to put one. 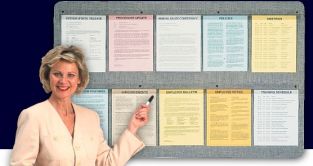 I love the idea of the Tack-Free Quick Change Bulletin Board, as one might guess from my dalliance with check rails and task tracking. 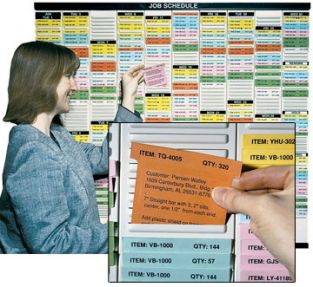 These TCards fit into a special board, and are loaded with information. I don’t know what I’d personally do with it, but dang…I want one anyway. 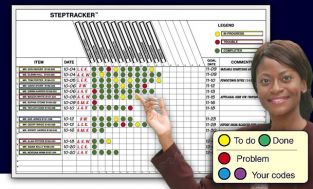 I like the name of the Do-Done StepTracker, and I love the idea of “flip the magnetic button over to switch from to-do to done” functionality. Elegant and effective! 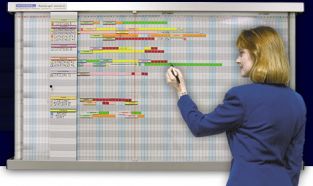 Ok, I listed this one before, but now there’s a rg showing just how the RotoGraph® Long Range Daily Line Item Planner actually works. It’s one continuous scrolling surface that you can write your schedule on, kind of like a real-world version of Excel with locked sheet cells. 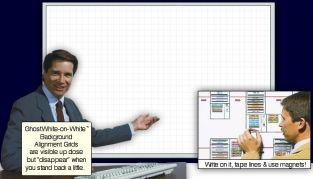 This is a great idea: a whiteboard with faint gray lines that show up only when you’re up close. A whiteboard to put an end to migraine-inducing crooked writing!

There’s all kinds of other stuff, like the crazy awesome specialty boards, including a transparent whiteboard for use with neon markers…great for that “war room” look, I’m thinking. Check the older Magnatag post for more interesting items.

The Story of Magnatag

As I oooohed and aaaahed over the products in the Magnatag online catalog, I couldn’t help but wonder who or what was behind it all. Usually, I think of office supply provisioners as being rather lame, pumping out mediocre product with little effort going toward innovation. About six months ago, though, Magnatag’s PR company came across my blog and asked if I had any questions about the company. I got to email some questions to the founder, Wally A. Krapf, who generously forwarded me several fascinating anecdotes about sales, personal initiative, and risk from his days as a young salesman-turned-entrepreneur in post-WWII Rochester, NY. Here’s an excerpt about how he got the idea for Magnatag.

NOTE: I’ve removed names for purposes of privacy, edited some sentences out for flow, and bolded a few phrases for my own emphasis, but otherwise this is what Wally related to me via email:

WOW. I certainly hope Mr. Krapf writes his book, because it’s the most inspiring bit of business storytelling I’ve ever read. It reminds me of Richard Feynman’s autobiography, Surely You’re Joking Mr. Feynman, one of my favorite books for its humor, personality, and insight.

For those of you checking your credit card limits, a caveat: I haven’t yet ordered anything from Magnatag, as I don’t have the space for a whiteboard, so I can’t say I’ve hefted their boards or written on their magnets. They sell direct from their factory, and don’t seem to use retailers like Staples. I imagine that they’re used everywhere, taken for granted as reliable pieces of functional architecture in businesses and organizations across America. If someone in the Boston area spots one, let me know! I want to check out the construction and finish, and through that, get some closure on this story :-)