I’ve mentioned before that I’ve recently started getting my hair cut by an actual hair stylist. I had gone to barbers and stylists before for the cheap hair cut, and it’s always come out very bad. I figured I could save myself some money to cut it myself, relying on my graphic design eye to guide my hand. My hair is just another design problem to be solved! And apparently, so are my fingernails…

Before I started seeing Kim, my hair regimen was a two-step self-administered process. First, I used the #2 attachment on my hair clippers for an overall buzzing. This was followed up with the #1 for the sides, which imparted more of a rectangular shape to the overall cut. The subtly-shaped buzz cut gave me a “badass freelancer” vibe, which my male compadres heartily approved of; once a bunch of us went to Mohegan Sun (a casino) dressed up in our best suits, and people kept stopping me to ask directions. After a while it dawned on me that they thought I was casino security…awesome! As cool as this was, my sister disapproved of my buzz cut, saying that it made me look “thuggish”. While I initially resisted her assessment, it later became apparent that this look was working against me in social situations. It was scary and intense. Great for staring down uppity engineers, but not great for building consensus or meeting the kind of people I liked to hang out with. You know…friendly people.

I grew out my hair for a few months (it’s thin, fine, and balding on top, so this took a while) in preparation for my first official professional hair appointment. Kim’s very friendly and approachable, and has a real passion for cutting hair. She has “the eye”, and it’s fascinating to watch her work. People have complimented me on the haircuts unsolicited several times, and I’m astonished at how much of a difference this makes. I probably shouldn’t be, because in graphic and interactive design I’m fully aware at how the corners and edgework make a big difference in the perceived polish of a design. Car detailers, landscapers, and cake decorators know this to be true as well. Clean work counts as much as style when you’re going for that sense of refined presentation. A client of mine calls this critical initial impression, “the touch of the door knob”.

The Other Small Details That Matter

Anyway, I’ve been getting my hair cut regularly for about six months, and I’ve grown comfortable with the routine. I’ve even opened up a bit in chatting with people while I’m getting my hair cut. This is a huge part of the salon experience, I’ve come to realize, a far cry from the grim “loose lips sink ships” atmosphere I had been conditioned to. Recently, Kim and I were chatting about something and she uttered the phrase “nail tech”. Always one to seize on new terminology, I asked her what a “nail tech” was. “Oh, it’s a person who does the nails at a salon. Manicures and pedicures.”

Ordinarily I would have been satisfied with filing the information under “salon staffing, specialty” and moving on with my life. However, last October my sister had been observing me doing some graphic design for a safe shooting tutorial. I had used my own hands in the photography, and being presentation-conscious I had I made sure my nails were trimmed and clean. I thought they looked just fine, but Sis peered over my shoulder at the monitor and commented, “Eeewww, you should touch up those nails and fingers before you upload this.” I was surprised, and protested “But I cut them and everything!” She shook her head, a slight frown tugging at the corners of her mouth. “They could be better.”

For the next hour, I peered at my fingernails to try to figure out what she was seeing. Here was an entire level of detail that I was unable to perceive. What did good nails even look like? I had no idea! But apparently I was broadcasting I AM A HUGE SLOB to all women within visual scanning range. Wow. This was not dissimilar to my own experience in judging the quality of computer graphics work; most people can’t see the flaws, but they jump right out to people in my field. Much can be told about the experience of the digital artist through what flaws they allow in their work.

I relayed the story about my sister to Kim, who took an immediate professional interest. “Let’s see ’em!” she commanded, and I obediently held up my hand. “Yep…” she muttered, scanning my nails with the eyes of the skilled practitioner. “We can help you.”

“Well, your cuticles could be trimmed back. And the length is of course too long and uneven—a little filing goes a long way. We can do some buffing as well. Let me call the nail tech over and she can tell you more.”

The nail tech came by and gave my hand a second once-over. So this is what a broken car feels like I thought. The nail tech clucked and told me the bad news: “Yes, it’s looking pretty rough, but a manicure will clean it up good.”

“You don’t mean manicure!” loudly interjected a nearby customer, who found my situation hugely entertaining. “For men, it’s called a personal hand detail. You don’t want to scare him off!” 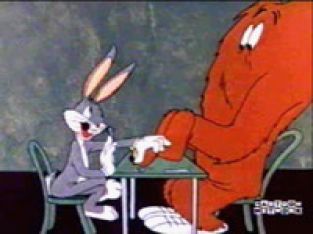 I thought about it. On the one hand, getting a manicure seemed pretty…girly. On the other hand, everyone knows that mobsters of distinction have no issues with having well-groomed nails, you got a problem with that? And there was that Bugs Bunny episode, Hair-Raising Hare, with the monster chasing him around and eventually getting a manicure. I hadn’t seen that cartoon in years…in a way, getting a “personal hand detail” was a way to reconnect with a childhood question I had never thought to ask. Plus, I always like a good sales pitch, especially when it’s in a comfortable environment.

Six weeks later I showed up for my regular hair cut. We had scheduled another half hour for the “personal hand detail”. After the cut, I was led into an entirely new part of the salon, a small room with pretty curtains, by the friendly nail tech. I immediately noticed a tall chair in the corner, resembling a dentist’s chair, except instead of scary arms there was a serious-looking metal basin with with whirlpool jets in it.

“Wow! What’s that?” I asked excitedly.

“There’s massaging jets and stuff for your feet?”

I was shown to a small table with a basket of nail products. The basic procedure was to soak your hands in a solution of soapy water—yes, just like the monster in the cartoon—to soften up the cuticles. Cuticles, she explained, should be neatly trimmed back. She had a pair of sharp clippers that were used to cut off the dead flaps of skins that had accumulated, then used another rounded tool to push them back. She used two kinds of emery boards; a coarse one to shape the nails, and a finer one to buff the surface.

One surprising thing was the way that she filed the nails; she worked the filing motion in such a way that the edges of the nail were rounded, almost like finishing the edges on a fine piece of furniture. The result was a very closely-fit edge that felt great. For the first time, I felt I could confidently play guitar without my nails getting in the way. I had thought my nails were just configured weird and unsuitable for guitar, but it actually was that I was cutting them wrong. Amazing!

After the cuticles were pushed back, trimmed, and the nail surfaces were buffed, some kind of oil (scented with cherries) was applied to the nail surface and cuticles. The idea I think was to condition the surface of the nail, but I’m not sure. It smelled exactly like a Chinese almond jelly dessert that I liked, which I mentioned. This lead to a discussion of interesting restaurants in the area, which is always welcome. And here was a second surprise: getting your nails worked on by a professional while chatting is really relaxing. The last time anyone cut my nails was when I was a kid. Mom would cut them, and the experience was always kind of stressful because sometimes she would cut a little too deep, or we would squirm and twist around awkwardly. This was utterly relaxing.

p>After the nails soaked in the oil, it was removed with some kind of alcoholic solution. I asked what it did, and she explained that this strips the oil from your nails so when they were painted with the polish, it would stick. I must have tensed up, because she immediately assured me that I wouldn’t be getting that done. Some men, though, like a clear nail polish. Shiny nails are more attractive, apparently. This was later corroborated by another friend whose father was a WWII fighter pilot. Later in life, he discovered that he liked his nails to look neat, and got his own home manicure stuff to ensure they looked good all the time. Seeing her tough-as-nails dad splaying out his hands, thoughtfully painting them with clear nail polish…apparently, it was quite the mind-bender.

So the nails were done, but I was in for the third surprise: the moisturizing hand massage. I was talking about something, and then the massage began. “Oh, I didn’t know I got a massage!” I exclaimed. “This is really….nice!” And indeed it was. When I relay this part of the story to female friends, they all cackle with conspiratorial glee. Men of Earth, this is one of their Great Secrets! Women go to the salon and get pampered with awesome massages and scented oils, and it rocks. I would never have guessed in a million years that this was the whole point…it just feels good! Sure you could cut and file your nails at home, but having a professional do it with grace and personal care is a total luxury. Why can’t visiting the doctor be like this? Total customer satisfaction! It’s also cool that this salon has a big basket of lollypops up front. They’re not stingy with them either, unlike some doctor’s offices I’ve been to. “I’m sorry, sir, but those lollypops are reserved for our…younger patients.” Bah.

Comrades! I would recommend having a personal hand detail. I am scheduling a personal foot detail for next time; I know I should be saving money, but my feet actually could use some work on the heels because they’ve gotten all thick and calloused, and it sometimes hurts walking around in the winter time because of cracks in the skin. I figure I’ll learn something about taking care of my feet. Plus, by sheer coincidence the next scheduled appointment is on February 14th! It’ll be nice to get pampered…A Happy Valentine’s Day to Me!