[yes, I rewrote this article almost entirely…that’s what I get for posting laaate at night when I was too tired to think straight]

A Russian-born friend of mine sent me a simple recipe for the beet soup known as Borscht. I’ve been very interested in cooking lately as a money-saving measure, and have been seeking out hearty soups as an inexpensive way to eat well. Borscht is one of those ethnic foods I haven’t tried, and I’ve never seen it or tasted it. My curiosity was piqued!

Here’s what it looked like (this is right out of the fridge, btw): 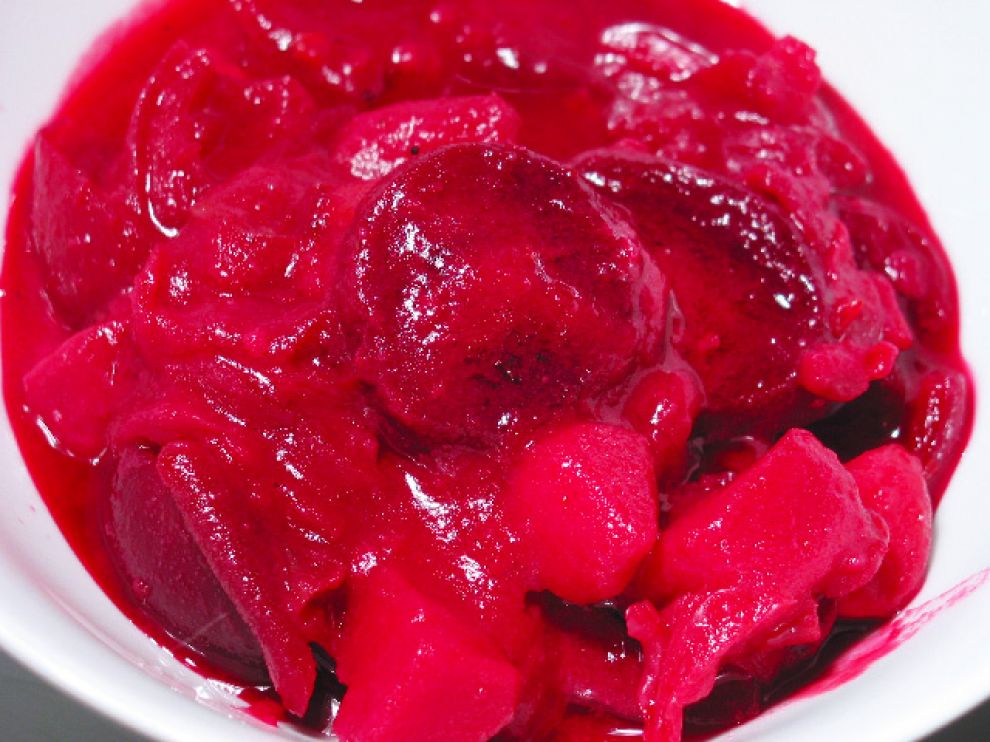 It’s interesting to make a dish that you’ve never tasted or seen before, especially if you’re also unfamiliar with the soup-making process. About halfway through burning my borscht, I was struck by how similar this was to creating an innovative software product. For the vast majority of development work, we can point to an existing product and say “it’s going to be like that.” Pre-existing patterns are a big time-saver. With the borscht, I only had a vague vision of a soup, but really no idea how it would come out. I knew intuitively that the combination of root vegetables in the “soup” form factor was appealing, but would it really work? While it’s true I had a recipe, I was following it rather loosely, discovering key steps a little after I messed them up. It was invigorating!

Borscht has a lot of root vegetables in it: beets, potatoes, carrots, and onions form the base. First you boil the beets for an hour so they get soft, then take them out to cool. You cook the potatoes and carrots next in the red beet liquid in the second phase. After that, the final phase is to add the sliced beats back in with a few bay leaves with some onion and cabbage. In retrospect, it’s an easy recipe.

Of course, while I was cooking it for the first time, I made all kinds of mistakes. I didn’t know how to cook beets, so I just dumped them in and didn’t wash them first. I figured I could toss the beet water afterwards, but then I read later that you keep it. So I had to separate the sand from it using another pot. I also discovered that beets are really easy to peel with your hands after you boil them, and they make an incredible red-purple stain on everthing they touch. I also added the onions way too early and they mushified. I added more onions later, and then I ran out of liquid while I was watching TV and the whole pot almost burned. Exciting! Then there were a dozen small details: how much water do you need to cook a given volume of beets? How much salt and pepper, added when? What shape do I need to cut the beets in for that authentic look? And really…am I making anything that resembles borscht, or am I opening myself up to ridicule by connisseurs of eastern european cuisine? I have certainly experienced that in the Asian realm, when I tried to cook pork belly stew for the father of a friend of mine who was from Shanghai in the old days. He had been very excited, but when served my made-up version, he was visibly disappointed. In his eyes, I had done the equivalent of buying a Del Monico steak and boiling it. Quel horreur! I remember once getting some lunch from the small independent cafeteria in our building, where they were serving “Asian Stir Fry”. As I read this aloud off the menu in a slightly amused tone, I noticed that the chef couldn’t quite meet my eye.

On the other hand, I had made something new, and it was good. The next day I tried the borscht again, my friend having said that borscht is really good when it’s a day old. I was warned not to re-boil it because it loses the red color if you do. The flavors had mellowed out a bit, and a new tanginess was present. It’s true…day-old borscht is better!

At this point, I looked on the Internet to see what borscht was supposed to look like, and was relieved to see that mine looked similar. There were variations in viscosity, in how the beets were cut, in the amount of cabbage, and whether the dollop of yogurt was on top (I forgotten to add that). But the color was right, and that was affirming. The beets have a very strong red dye that makes everything look the way it sorta should. Ah…closure!

The process of making borscht for the first time triggered a few thoughts:

Now that I think about it, the Production side of me is something I learned to value through work. Invention, however, has the deeper personal history:

I never liked chess because it is a bounded problem set. Sure, it’s a very large set, but never mind that. The real game, which occurs on the psychological level, requires years of study and memorization. It’s fascinating and very cool, but there are other things I would rather spend my time doing. Chess, in the long run, is a game for nimble pattern-minded individuals, and I can’t compete on that level without investing a lot of time. However, I know just enough about the psychology of chess playing that I can enjoy it: I draw upon my readings of non-chess strategy and body language to make moves that have high dramatic potential, then I see how the other person reacts. I don’t make stupid moves, so the opponent is kept on his/her toes. Over the course of the game I learn a lot about my opponent, which for me is a much more interesting activity than shifting pieces around on a grid. I lose, but I also win :-)

One of my favorite movies: Star Trek II: The Wrath of Kahn. Some of you out there will nod, “of course.”

Another friend was telling me about a sport in which you draw a straight line on a map, and then you must follow that line through any means necessary. Giant mountain in the way? Sorry, you’ve got to go over it. It’s an extreme real-world obstacle course. I can’t remember the name of the sport at the moment, but it struck me that this is so opposite of how I would ordinarily deal with a situation. I can think of a million ways to get around something, but I haven’t developed my direct confrontation methodology to the same degree. I believe I’ve known this subconsciously; studying competitive activities and training regimens has been one of my pastimes in the past few years. I’ve also been a lot more willing to go into an unknown situation to test my ability to deal. I like training with this in mind now; in the past I haven’t appreciated it.

p>I didn’t expect borscht to be so intellectually nourishing. Highly recommended if you’ve never made it before.