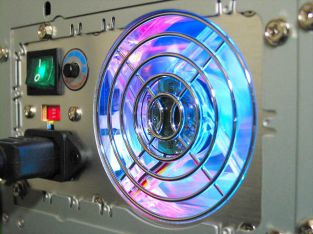 It’s easy to be productive when I’m feeling happy and focused, but right now I ain’t: I’m downright grouchy, thinking about bbq that I can’t have and I can’t feel my toes. In other words, it’s the perfect time to think about motivation from a negative perspective.

I’ve been having a kind of blah week, which may be related to the strict diet low-carb diet I’m enduring. Then my file server crashed (needed a shiny new power supply, see pic). And the weather is, as my cousin Ben once succinctly put it, “stupidly cold.” I’m feeling pretty damn unproductive and unmotivated.

Ordinarily I’d cook something yummy like my favorite curry or ribs dishes and pig out to cheer myself up, but I’m on a diet that, damn it, is actually working, so stuffing my face is not an option. Crap crap crap. Maybe I’ll take a nap.

I was surprised to see a ghostly form hovering over my desk. I thought it might have been a smudge on my glasses, but then it SPOKE.

“I AM THE GHOST…OF SLOTHFULNESS!” the ghostly form said by, by way of introduction. “I’m here to tell you that you’re a fat, lazy, unmotivated do-nothingnik! Through hard work and unwavering commitment, you could have achieved greatness! Actually, I don’t mean you specifically…that’s pretty obvious. You are not 1/10th of the man your father and grandfather was. Not even a shmidge.”

“And you’re a big dork!” the ghost added, dissolving languidly into a vortex of spite. Before I could react, another ghost appeared in its stead.

“AND I AM THE GHOST OF TALENTLESSNESS!” intoned the new ghost, dressed conservatively in a gray suit and expensive leather shoes. “It is obvious to me that you’re not talented enough, not smart enough, and not accomplished enough to grab hold of the brass ring, let alone hold on to it.” The ghost paused dramatically, smugly satisfied with its pronouncement.

“What!?” I exclaimed indignantly, “Surely there is some special talent or collection of skills that are exceptional in the right circumstances! Maybe personality + talents would—“

“No no no, that’s not how it works.” the ghost said impatiently. “If you’d had any real talent, it would have manifested itself—at the latest—by your 21st birthday. Too bad you didn’t do more work in high school and college…that might have made up for your dearth of talent, and you could have gone to a really good grad school. Then you might have had a shot. But no…I want to find my passion…” The ghost minced around in a circle, hands waving in mock panic. “I need to know my purpose in life! I’m a maverick! I’m a lone wolf!“

The ghost stopped, suddenly serious, and looked around cautiously before whispering to me in a confidential manner. “Now, I don’t usually give advice, but you should really consider joining a company that has very simple and repetitive task requirements. You know, something you could be good at without straining yourself and asking why? why? all the time. Be a good cog in some larger, more important machine, contributing to the bottom line for someone else under a stern manager that knows how to kick your ass. Then maybe you’d amount to something, earn that level 3 salary, have a nice bennies package and maybe a matching 401K. You’ll have people to go bowling with. You like bowling! Wouldn’t that be nice? No more sitting at home in your basement on Friday night. Alone. But that’s not my area of expertise. My colleague will fill you in on that.” With that the ghost glanced at his Seiko, muttered, and poofed away.

The third ghost didn’t appear immediately, probably to give me time to reflect upon my wasted years. Thinking back on that, though, I can’t really say that any of them were wasted. Maybe I didn’t push everything through to their “optimal conclusion” as measured by other people’s metrics, and I didn’t cave in on my principles (though, admittedly, they have not always been correct). Really, the only thing that has me down is not being in as strong a financial position as I’d like, so I could worry a little less about the future and have the resources to do something cool. Less worry about money and…

“LONELINESS…” sighed the third Ghost, materializing in the form of a frail, tired man by my desk. “Loneliness, Isolation, Misunderstanding. Induced by your own hand. Thanks to this.” He gestured at the computer monitor. Indeed, the computer had been my main outlet for frustration when I was a kid, looking Chinese in a Chinese society but unable to communicate or participate in it. At some point, I’d angrily said fuck you to that, and withdrew into computer graphics and computer programming. That was a world I could build myself and understand. I think a lot of kids seek that kind of control over something, and it becomes an anchor in an otherwise frustrating world. And when you grow up, that anchor sometimes holds you back.

“DON’T FORGET BEING MISUNDERSTOOD” interjected the Ghost testily, not wanting to lose my attention. “Really, does anyone ever really understood what it is you were looking for? Or why? Or even what you DO? You don’t even understand it yourself. You’ve spent your life chasing interest after interest, looking for that one true passion. Tilting at windmills. Not that you’ve actually read Don Quixote, but you know what I mean. I should know. I’m you.”

“WE’RE ALL YOU!” said the Ghosts in unison, manifesting together in an impressive display of synchronous materialization. But instead of being pleased with this observation, they looked pretty pissed-off.

“Being you sucks!” whined the Ghost of Slothfulness. “Why do I even get up in the morning? It’s not worth it! I’m not even a real Ghost yet…I’m an intern! I’m not even supposed to be here today!”

“I would concur with your first statement…” replied the Ghost of Talentlessness, “if not the latter. Regarding your internship: you put in your dues, then if HR says you’re a good match for our Organization, you can qualify for a position pending a two-year probationary evaluation period. It is the system, and it is good. Shut the hell up and get us some coffee and danish. We’re stuck with this doofus”—he gestured curtly in my direction—“we might as well get comfortable.”

“I told my manager I don’t like working with other ghosts, and he still teamed me up with these guys.” sighed the Ghost of Loneliness to no one in particular. He paused, brightening slightly. “Maybe if there were more women ghosts in the Organization…you know, cute ones wearing those wispy ethereal robes that cinch in just under the…” He startled from his reverie, fixing me with an accusing eye before coldly continuing. “You know what I mean, bachelor boy.”

“YEAH…HE DOES.” said the other Ghosts in unison. And they stood there, glowering at me. It was all my fault. All mine.

Why didn’t I feel bad though? I started off feeling pretty crappy, but now I actually feel kind of good. The Ghosts looked markedly irritated at my good humor, which only added to it.

“It’s because you already know what you need to do.” said a tinkly voice, “You have always known it. It’s not the specifics that necessarily matter, but the way you live and make your decisions and take care of yourself. You’re already doing it.”

I turned around, and beheld a female spirit, with smile crinkles tickling the corners of her eyes. The Ghost of Loneliness hid behind the Ghost of Talentlessness, who himself was clearly unsure how to handle this breach of protocol. The Ghost of Slothfulness just stared, mouth ajar.

“Who the hell are you?” I demanded. “Did the Organization send you? What do you want?”

“N/A, nope, and nothing!” she chirped. “I am an independent agent. Hope, optimism, believing in good stuff happening, etc. All the good stuff. Yeah!” She beamed.

“Awesome!” I said with growing excitement. “So are you going to melt these other Ghosts away with blasts of HAPPY POWER?” The male Ghosts turned a shade grayer at the suggestion, and huddled closer together.

“No no no, that’s not how it works!” she laughed. “Those guys are part of you, and they’re part of what makes you a motivated individual. You don’t want to be them, so you learn how to face them, even integrate some of what they’re saying. Maybe they’re even necessary for a balanced life. Besides, all you really need to remember is One Thing.” The spirit grinned wickedly, relishing the drama of the moment.

“One thing? Like in City Slickers? They never actually said what it was!”

“I’m not sure I understand.” I said after a long minute. “I’m a pretty complex person, very ‘meta’. I like thinking of complexity and systems and stuff. Simplicity isn’t my bag.”

“Give it a try and see what happens.” She smiled. “It’s not always complicated.” And with that, she winked away in a puff of positive energy.

I’m still trying to figure it out what “It’s Simple” means, but I’m beginning to feel that there’s something to it that makes sense. One intepretation is that “simple” refers to “taking a single step”. It might also mean “making that one commitment”. Or maybe it’s “focus on your strengths”. Or maybe it’s just a philosophy of doing that underlies a productive mentality. Like Occam’s Razor, applied to life choices? But if I analyze it too much, that sort of defeats the purpose of the “simple” approach.

Maybe it will come to me next time I dream.